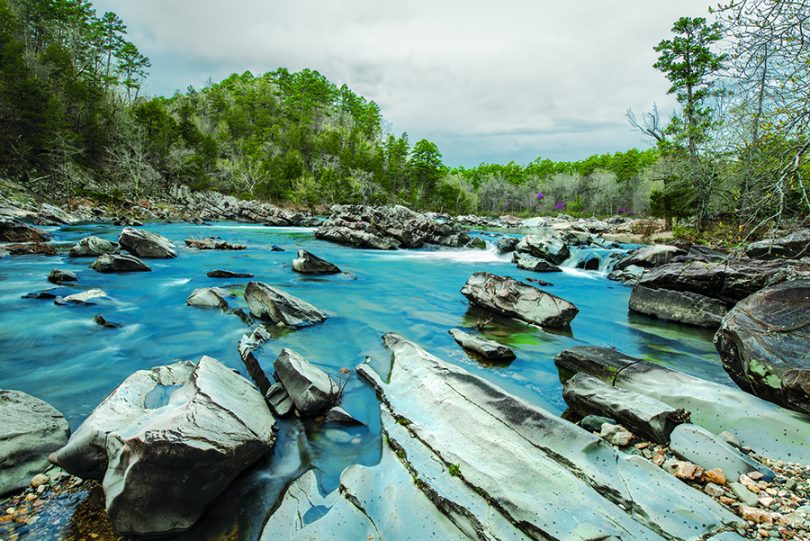 By Joe David Rice | Photography by Jamison Mosley
Mention the word “Cossatot” to a hundred people in the state and ninety-nine are likely to shrug and share a blank look. But the eyes of that one hundredth person will immediately brighten, and you’ll hear a series of excited comments extolling the delights of a little-known treasure tucked away in southwest Arkansas.
Originating in the rough-and-tumble country of the Ouachita National Forest near Mena, the Cossatot River flows south, more or less, for about 25 miles before flowing into Gillham Lake. It’s this stretch of classic whitewater – a section where the stream has been attacking the east-west trending ridges of the Ouachitas for eons – that caused Native Americans to call it Cossatot, a name loosely translated as “skull crusher.” Given the boulders, ledges, drops, waves, and powerful currents of the river, that rather intimidating designation is entirely appropriate. 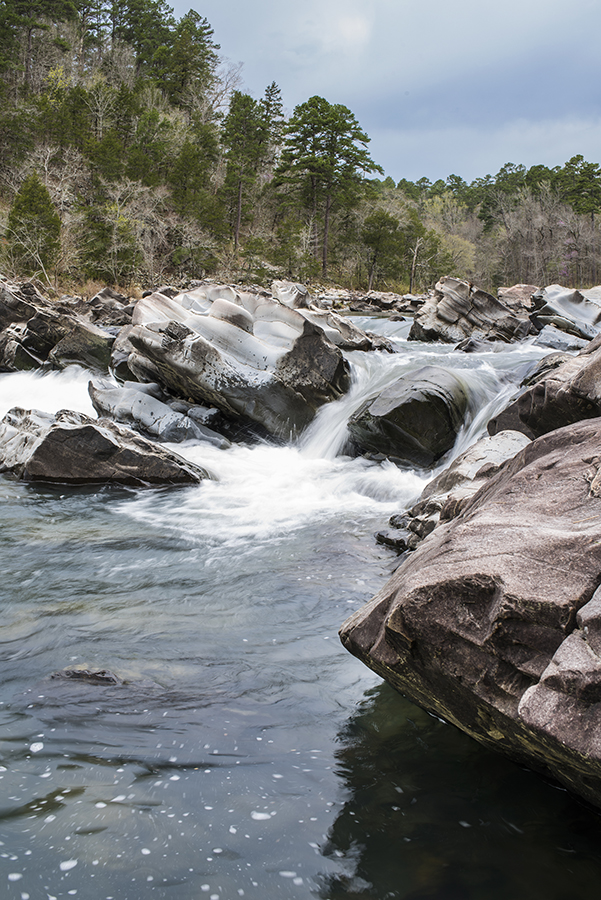 The falls of the Cossatot River pose a challenge to canoeists and kayakers.

Although the “falls” of the Cossatot were clearly marked on state maps 175 years ago, Arkansas’ canoeists and kayakers didn’t discover the stream until fairly recent times. In fact, in 1977 a reporter for the Arkansas Gazette was allowed to accompany a secretive group of floaters on an expedition only after promising not to reveal the name and location of the river. He kept his word, never identifying the stream in his lengthy feature article, and writing, “Only a few know of its existence.” By the way, his kayak was destroyed following a collision with a boulder and the intrepid journalist was forced to “body surf” the last four miles of his trip, arriving at the take-out point bruised and battered but alive.
Which brings me to the most salient point of this piece: for the vast majority of us, the best way to explore the Cossatot River is from the safety of dry land. The good news is that several such options became available when the State of Arkansas, with assistance from the Arkansas Nature Conservancy, purchased an 11-mile riparian corridor from the Weyerhaeuser Company in 1987, creating the Cossatot River State Park/Natural Area. It’s essentially a 5,400-acre tract bookended by the Ouachita National Forest to the north and the U.S. Army Corps of Engineers property at Gillham Lake to the south.

An eastern redbud blooms along the river.

An excellent starting point for a Cossatot River experience is the 16,300-square-foot visitor center located on US Highway 278 near the south end of the park (about 8 miles east of Wickes and 40 miles west of Glenwood). This modern facility features an impressive collection of interpretive exhibits along with a wildlife viewing station, two classrooms, restrooms and a gift shop. The staff will provide details on a variety of workshops and presentations about the park’s geology, flora and fauna – many of which are offered throughout the year. If you’re feeling adventurous, ask about special interpretive programs such as guided kayak tours and snorkeling excursions.
The center’s employees will also be pleased to give directions to major access points, most of which are reached via graveled Weyerhaeuser roads (be alert for logging trucks). The Brushy Creek Recreation area, a popular day-use destination, can be found at the north end of the park at the Arkansas Highway 246 crossing. It offers picnic tables and grills, a nature trail, solar-powered restrooms and one of Arkansas’ best swimming holes. Limited tent sites are available downstream at the Ed Banks Bridge and Sandbar Bridge sites.
For most visitors, the highlight of their Cossatot visit is the time spent at Cossatot Falls. It’s within this canyon-like setting where the stream has torn through a massive ridge, exposing layer after layer of some of the most fascinating sculpted rock formations to be found in the state. When water levels are high, the roar from the rapids is almost deafening. In this one-third mile segment, the river drops 33 feet in elevation, delivering Arkansas’ most challenging water for paddlers – drops with such colorful names as “Cossatosser,” “Whiplash,” “Eye Opener” and “Washing Machine.” At the same time, it provides a never-ending array of photo opps for those opting for a camera rather than a canoe or kayak. A handful of tent sites are available (self-pay; first come, first served) along with public toilets.
Hikers will also enjoy the Cossatot River countryside. One route, the half-mile-long Waterleaf Interpretive Trail, begins at the visitor center and drops down to the river below the Highway 278 bridge. Nearby is the Harris Creek Trail, a moderately strenuous 3.5-mile footpath that meanders through the mature forest between Harris Creek and the river.

The park features trails and bridges.

For those seeking a vigorous day-long challenge, the Cossatot River Corridor Trail may be the ticket. It extends for a full 14 miles from the Brushy Creek trailhead to the visitor center – so take plenty of water and something to munch on. This clearly marked trail never strays too far from the river as it winds its way south to the Ed Banks Bridge. But some distance beyond this crossing, the trail twists and turns through the woods and doesn’t provide much access to the stream until it reaches the Cossatot Falls area. And the final four to five miles on in to the Visitor Center are far removed from the river until the very end of the trail. Nevertheless, with dozens of switchbacks and some 39 footbridges (all but two crossing feeder creeks), it makes for a memorable jaunt. As for wildlife, you might get lucky and spot whitetail deer, wild turkeys, and – for the exceptionally fortunate – a bobcat or black bear.
It’s no wonder that the Cossatot River has been placed in the country’s “Wild and Scenic Rivers” system, a register which includes a handful of other extraordinary Arkansas streams such as the Buffalo River and Richland Creek. With its crystal-clear waters and outstanding scenery, the Cossatot is truly one the Natural State’s gems.
Before your visit, plan on spending some time at the park’s website – arkansasstateparks.com/cossatotriver – to acquaint yourself with the various points of interest. Should you want to overnight near the park, lodging can be arranged through properties listed at the arkansas.com website. While paddlers generally prefer the winter and early spring months (when water levels are often at their optimum), those of us willing to investigate the Cossatot by foot will find late spring to be a good choice. May should be a particularly good time for an outing.
While the Cossatot River’s in a remote corner of the state, it’s worth mentioning that a couple of other noteworthy natural attractions – Caney Creek Wilderness and Little Missouri Falls – are in the vicinity. And Daisy State Park – with its picnic grounds, bathhouses, 103 campsites, and even a yurt – is only about 35 miles to the east, nicely situated on the shores of Lake Greeson.
So, consider adding the Cossatot River to your list of “Must See” spots this year. It’s fun to casually drop “skull crusher” in a conversation and watch for reactions.