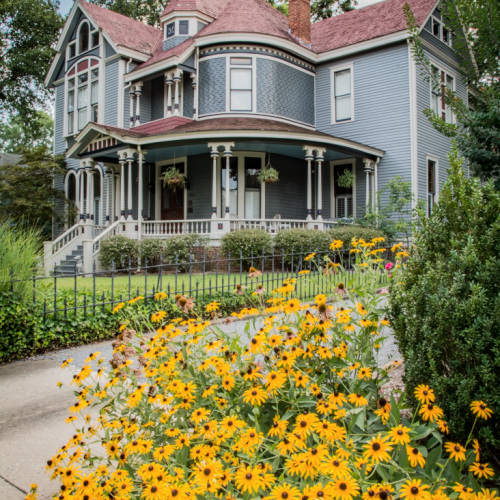 [dropcap]W[/dropcap]hen Elizabeth Michael and Dan Roda moved from a 900-square foot condo into a 5,000-square foot 19th century Victorian-style house in 2014, there were plenty of rooms to decorate.

“Basically all of our belongings from our condo fit into our bedroom,” says Michael. “We got a lot of new stuff.” 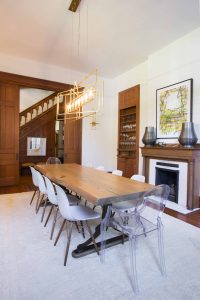 A single-plank sunken cypress table with a hand-welded metal base was custom-made in the Paul Michael Woodwork Shop in Dermott. Photo by Janet Warlick

Michael found ample design inspiration for the whole house through Paul Michael Company, based in Lake Village and owned by her parents, Paul and Debbie Michael.

“I got opinions from my dad about the value of the pieces,” Michael says. “He could tell me if I was paying too much for something or if it was a good value. But I think with his store it’s so easy to have different styles. Someone can go in there and be country and western, completely modern or be wanting a shabby-chic kind of look. What I did was try to bring in classic and modern elements.”

The Hemingway House, 1720 Arch St. in Little Rock, was built in 1894 and originally belonged to Wilson Hemingway and his wife, Helen. Hemingway, a former Arkansas Supreme Court justice, was a founding partner in the Rose, Hemingway and Rose law firm, now the Rose Law Firm.

The house has undergone several transformations since then, at one time deteriorating while in use as a boarding house, then being restored to its original Victorian style at another. Michael and Roda, who met while studying at Villanova University in Philadelphia, researched its history as they prepared to move in, but they find themselves learning more about it all the time. 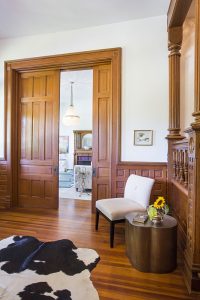 Dan roda and Elizabeth Michael’s decorating strategy is to blend their affinity for antiques with their contemporary preferences. Photo by Janet Warlick

“We were on the home tour for the Quapaw Quarter in the spring, and Charles Marratt of CM Construction told us he had been in charge of redoing it and that he covered up the mural in the dining room so that it could be restored,” Roda says.

Former owners Sharon and Scott Mosley, with whom Michael works at CJRW, a design, advertising and public relations agency in Little Rock, had a mosaic hand-painted on the ceiling of the dining room. That mosaic was painted over by later residents, but may have been covered in such a way that it can be re-exposed.
“That was one of the interesting things that we learned by opening up our home for the Tour of Homes,” says Roda, who is general counsel for Rock Capital Group. “You know, someone would say, ‘Did you know I repaired this 20 years ago?’ There were several things like that.”

While Michael and Roda haven’t made many structural changes to the home, they have changed the look and feel to make it their own. The “new stuff” they brought in blends their affinity for antiques with their contemporary preferences. Much of it was trucked in on an 18-wheeler filled with items Michael bought at market right after they moved in.

She labored most over the rugs and light fixtures.

“I didn’t want to have a lot of really dark anything going on really,” she says. “You’ll notice that a lot of the rugs are light in color and so is the furniture. I wanted to make sure it was really a big contrast to the darker wood.”

In the parlor, for instance, white is the dominant color.
“We picked white because it’s clean and light and airy. I really love this corner of the house and seeing the trees and kind of being up off the street. I really love that view. I also like the arrangement of this room, there’s no TV in here. It’s just easy to hang out in. Sometimes in the mornings I bring my tea in here and read a little bit, but for the most part I’m not in here as much as I would like to be.” 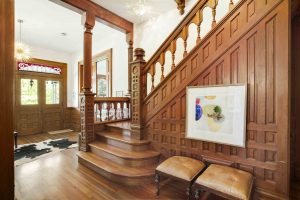 Michael used light-colored accessories to help balance out the dark wood in the home. Photo by Janet Warlick

The room Michael and Roda spend most of their time in is the library, which is separated from the parlor by a set of towering pocket doors. Floor-to-ceiling book shelves in there are lined with photos and pieces they have collected in their travels, as well as books — art books, which are art themselves rather than simply being about art. Their spines, when stacked together, combine to create pictures and designs.
The chandelier in that room is a metal frame filled with 96 recycled glass balls, and it gives off a pleasant diffused light. The sofa, custom-designed by one of Michael’s father’s suppliers, is upholstered in a blue-green fabric that looks like linen but is actually a durable all-weather material that can be machine-washed to remove spills or muddy paw prints made by their dogs — Pomeranians Poppy and Ethel, and a black Labrador named Philly.

“I still find myself looking for things for this room, and we don’t need anything else in here,” says Michael.

Roda is OK with that.

“We may not need anything else, but from a purely physical perspective we could probably fit more things in here,” he clarifies.

By their calculations, it actually would take 200 linear feet of books to fill the shelves. They bought enough to fill 36 feet soon after they moved in.

“We bought books two weeks ago in Denver and we’re just going to buy books and more books forever, I guess,” she says.

One of Michael’s favorite pieces of furniture is the centerpiece in her dining room: a single-plank sunken cypress table with a hand-welded metal base, custom-made in the Paul Michael Woodwork Shop in Dermott.

“More often than not this table is the Bark Bar corporate headquarters,” Roda quips.

Bark Bar is a dog-friendly bar Michael and her business partner Cara Fowler are gearing up to open in August in a vacant church at 1201 Spring St. in downtown Little Rock. The huge bone-shaped dog pools that adorn the house porch and parlor and the gilded plastic dog bones that decorate the backyard will soon be relocated to the new building.

“I really love this table. It just makes life a little bit easier,” Michael says. “I’m not worried about people scratching it – that would probably make it look even better.” 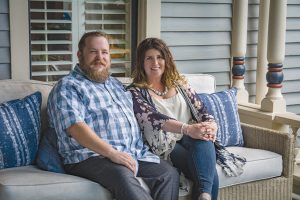 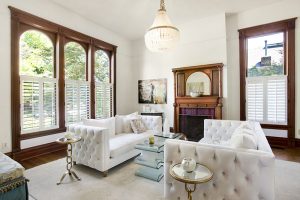 Much of the furniture for the home was trucked in on an 18-wheeler filled with items Michael bought at market right before they moved in. Photo by Janet Warlick

Just outside the doorway to the kitchen is a green wooden china cabinet where they store the china they used to serve guests at their wedding, held at Michaels’ family home in Lake Village.

“My mom and I, for two years, went around and scoured flea markets and resale shops trying to find all this china. We got 230 place settings of it, and these are just my favorites,” she says, holding up some Limoges plates.

The kitchen was modernized by previous owners, with cabinets that mimic the crisscross wood pattern of paneling in the hallways throughout the house.

In the breakfast nook, over a hammered metal and wood table with a big Lazy Susan hangs a blown glass chandelier designed by James Hayes. It’s neutral, a departure from Hayes’ usual bright colors. Through the window behind it, cypress Adirondack chairs, a fire pit and the carriage house, where Roda’s mother is staying during a visit from Drums, PA., are visible.  Inside, by the front door, Roda sits at the grand piano playing a piece he composed, “Poppy Smiles” as Poppy prances around behind him.

For Roda, this house evokes a bit of nostalgia. It reminds him of the one he lived in while doing his undergraduate work at Tulane University in New Orleans.

“The oak floors and the tall doorways with the windows above them, the brass doorknobs, those details like that,” he says. “I loved that neighborhood.”

They love this neighborhood, and they certainly don’t worry about running out of space like they did in their condo, even if “Tornado Liz,” as Roda affectionately calls her, decides to start a project that demands lots of room. He has a music studio, she has a yoga/craft room and they still have two guest rooms remaining.

“I don’t think we ever would have imagined living in a house on the National Historic Register. It wasn’t something we sought out,” says Elizabeth. “We just sort of fell in love with a lot of things about this house. It just felt right.” 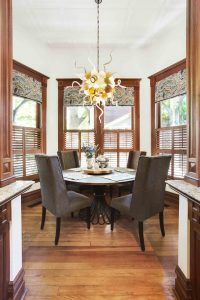 A blown glass chandelier designed by James Hayes hangs over a hammered metal table in the breakfast nook. Photo by Janet Warlick