It begins with a 300-pound ice block. Crystal clear, its value as a diamond would be immeasurable due to its clarity, lack of imperfections and sheer size – 40 inches tall, 20 inches wide.

The eruption of a chainsaw heralds the ice block’s transformation in the cold crispness of the Creative Image Ice studio in Little Rock. For years, that chainsaw – along with a Japanese chisel and a die grinder – was wielded by Clyde Aaron.

Now at 61, he can’t subject his body to the bone rattling vibrations of the chainsaw or the heavy lifting and moving of the ice blocks. Instead, Aaron guides the actions of his daughter and grandsons – Syrita Aaron, 39, Caylon Kilgore, 19, and Markeil Hubbard, 20 – passing on the craft of ice sculpture.

“Yes, vanishing art is what it is, but even though it’s going to melt, when you see the satisfaction on the customer’s face, how happy they are, it’s worth it,” Aaron said.

Aaron found his way to ice sculpting at a young age. When he was 17 he worked as a dishwasher for a now-defunct Little Rock hotel’s restaurant. Perhaps the man saw untapped potential or perhaps someone didn’t show up for work that day, but “the chef pulled me off dishwashing and said, ‘Hey I need you to start cutting this salad.’”

As time went on and he continued to work in the kitchen, Aaron said, “I would see these chefs come in with this ice and ice sculptures. That kinda blew me away and I said, ‘I’m gonna teach myself how to do that.’”

Eventually the company hotel, which was owned by American Airlines, would send Aaron to another property in the Dallas area to be a chef in training.

“I saw the chefs from all over the country they’d flown in with all this gorgeous food and again I saw ice sculptures, I was hooked,” he said. “My intent for being a dishwasher was to just get some high school money, but I wound up traveling the country as a chef.”

To hone his craft, Aaron would establish a Sunday brunch at each stop going from hotel to hotel in the chain.

“Each Sunday I would create an ice sculpture. By doing that I was getting the exposure to just play with it and kinda perfect the art of ice,” he said. 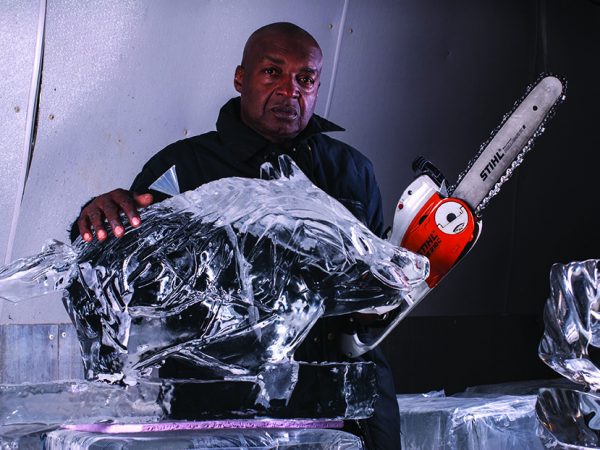 A 300 lb. block of ice and a chainsaw in skilled hands can produce a wide range of ice fantasies like this razorback complete with a funnel and spigot to chill beverages for an Arkansas Razorback tailgate party in Fayetteville.

In 1994 he came back to Little Rock to be executive chef at the Double Tree Hotel.

“The general manager would let me do ice sculptures there and I started to see that there was a profit in it because people were calling me to have me make sculptures. He said, ‘I don’t care as long as it doesn’t interfere with your work here.’ So I was cutting them there and then decided to find a place with a freezer.” He established Creative Image Ice in 1996.

Aaron said he’s carved “some weird things, some fun things and some challenging things over the years.

“In the 1980s when I was executive chef at the Sheraton Hotel in Amarillo, Texas, a food company called to say they wanted a Statue of Liberty. They wanted it big and they wanted it grand,” he said. “That thing was challenging for me but I made it. I think it was 12 feet tall and they set it up on a table in the corner. That was the one I was most proud of at that point because when you walked in the room your eyes couldn’t help but go to the Statue of Liberty.”

In the weird category, he recounts country club patrons who wanted sculptures for their ladies’ night parties.

“They wanted a male body with all the parts,” he said, chuckling at the recollection. “I was so young it was kind of embarrassing for me. I put a plastic bag over it and took it over to set it up and walked off, but they were very happy with it. Then each lady would call and try to outdo the other.”

Luge ice sculptures are also among the more interesting requests he’s received. These ice sculptures have tubing inside them or an ice channel called a luge, so beverages can be pumped or poured through creating a fountain from which guests can fill their glasses.

“I had another group that wanted a bust of a female and they wanted the drinks to come out of the breasts,” he said. That was also in Amarillo.

“One guy called me over to Memphis to help with ice welding. This was for the owner of FedEx, Fred Smith,” he recalled. “We had two walls 32 feet long. We built two bars with insets for flat screened TVs. There were two 12-foot dessert tables. And he had the machine that makes shot glasses. Everything was out of ice. That was probably the biggest project that I collaborated on. They spent $39,000 on ice.”

If the words “welding” and “ice” don’t seem to go together, think again.

Ice welding is a process used to bond ice blocks together to create intricate shapes. The welder uses a warm metal plate to slightly melt the perfectly flat sides of blocks meant to be bonded. In the soul chilling atmosphere of a 12-degree freezer, the melted edges quickly refreeze when the two pieces are put together. The bond is not easily broken afterward.

Aaron shares his story on a Monday morning at a bakery in downtown Little Rock. This is because Creative Image Ice rarely has visitors. That’s not surprising since the 20′ x 20′ freezer that holds the ice blocks is kept between 12 and 15 degrees and outside so that the workshop is still a chilling 55 degrees.

His daughter, Syrita Aaron, said she much prefers her home office.

“The boys and my dad can go in there and stay three or four hours,” she said, chuckling and almost emanating a shiver through the phone during a short interview. “I mainly handle the business end. There’s no telling what the sculptures would look like if they let me in there.”

Her son Caylon is the one most in charge of crafting new sculptures, she said. He’s a natural artist who loves to draw.

“It’s funny, but people assume that Dad knows how to draw,” she said. “Caylon loves to draw and gravitated towards the sculpting. My other son is more into the logistics, the delivery, the setting up, the breaking down.”

Aaron said it’s been tough giving up his craft, but he enjoys watching his family carry on the work.

“It was hard for me but it was time for me to get out of it. I just can’t do it at my age,” he said. “My grandsons traveled with me throughout the year and kept me company. Now I keep them company, but I also am there to watch and guide and help make sure the work comes out right.”

Aaron said it’s been tough giving up his craft, but he enjoys watching his family carry on the work. 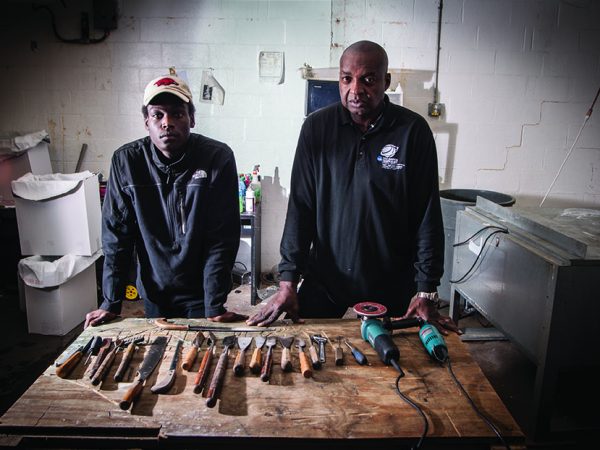 Clyde Aaron’s grandson Caylon, 19, has been at his side assisting and learning the craft of ice sculpting since he was 10 years old.