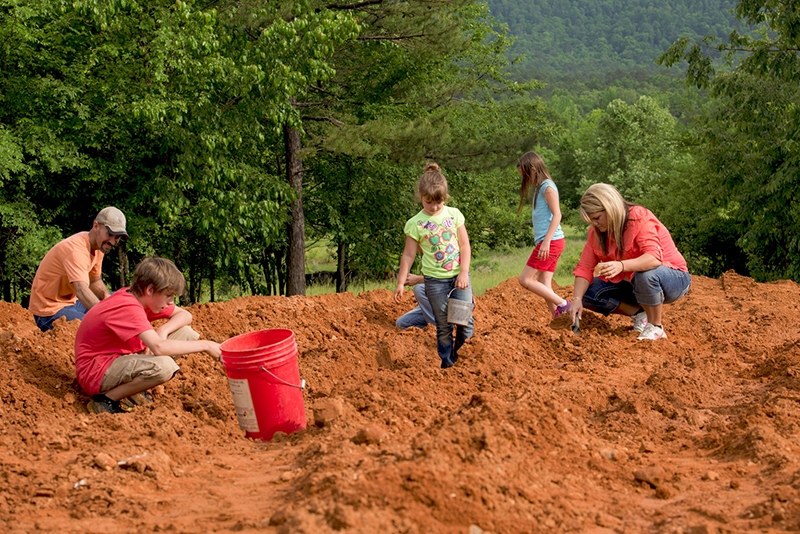 Richard J. Wegner never had any intention of settling in Arkansas when he stayed in Hot Springs Village and later camped out at Lake Ouachita State Park with a friend back in 1978. They’d left their homes in upstate Illinois, heading south for a few days to take a break from the weather. But there was something about the Ouachita Mountains that stuck with Wegner, compelling him to make a return visit the following spring.

“The fact is,” Wegner says, “I fell in love with the area.” He spent a full month in the region, looking for the perfect property. With the help of Willis Greeson, a local mentor from Montgomery County, Wegner found his piece of paradise: A 200-acre cut-over tract a few miles south of Mount Ida that still had a hand-dug well and functional barn, although the original house had burned down years earlier. 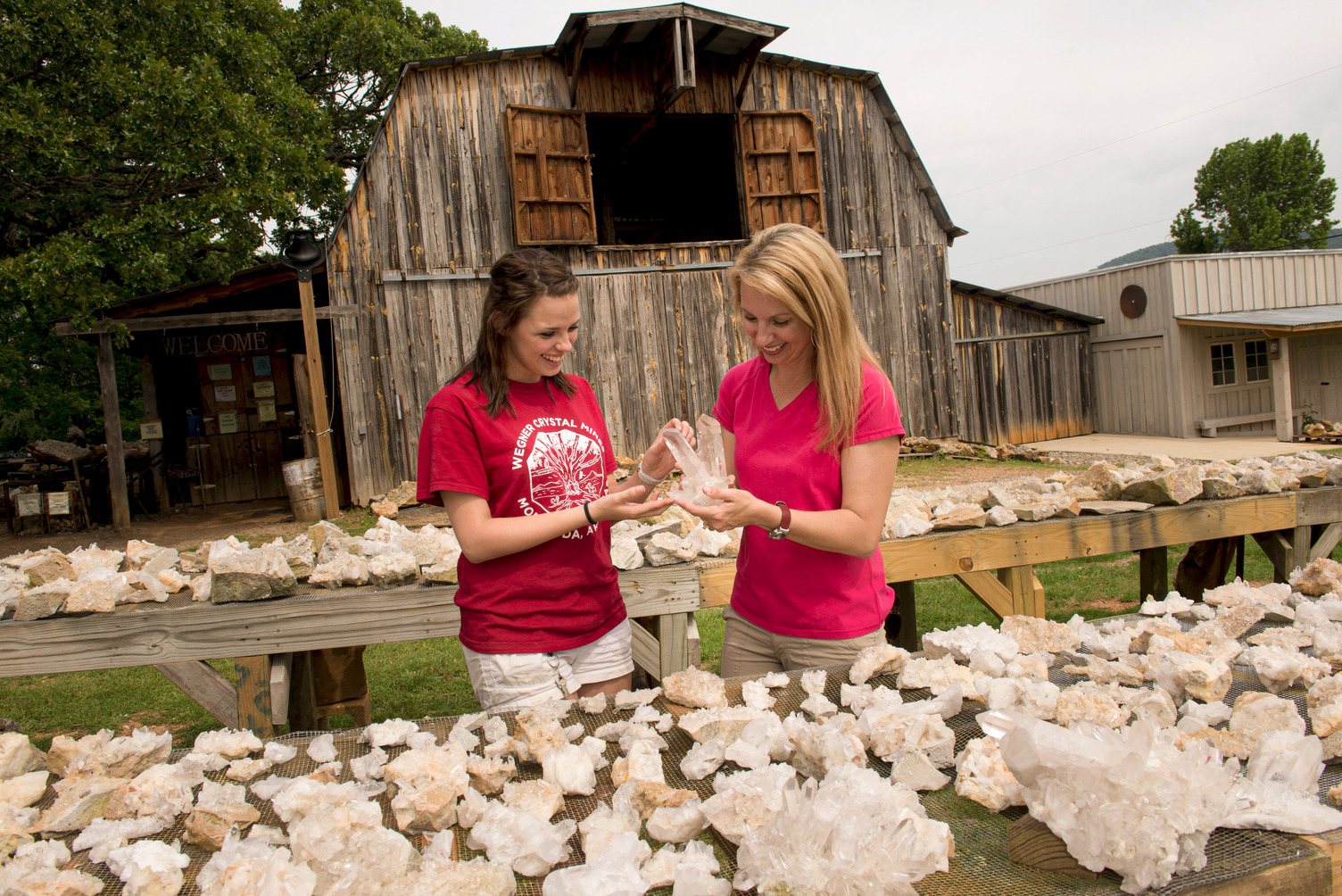 The second-most valuable piece of advice from Greeson was this: “You’ve got to have a pickup truck.” So, Wegner traded in his old Dodge van for a pickup and soon had a log cabin under construction on his newly-acquired property.

With his degree in horticulture and greenhouse management, Wegner had planned to build a network of greenhouses on the land so he could provide a variety of bedding plants wholesale to dealers. But as he walked across a hillside on his property, shortly after buying it, he came upon a series of shallow trenches. Scattered in and around these primitive excavations were hundreds of small quartz crystals. “The ground was just sparkling with these things,” Wegner says. “I realized then that there was some potential here to make a living.”

In 1980 he founded Wegner Enterprises and Wegner Quartz Crystal Mines. With assistance from his neighbor Randy Egleston, Wegner began digging for crystals using picks and shovels. It didn’t take him long to realize that more powerful tools would be required. Gary Fleck, a good friend from Hot Springs with a degree in mining engineering, got involved, helping him with blasting expertise and securing modern mining equipment. Before long, their work was yielding tons of brilliant clear crystal clusters. 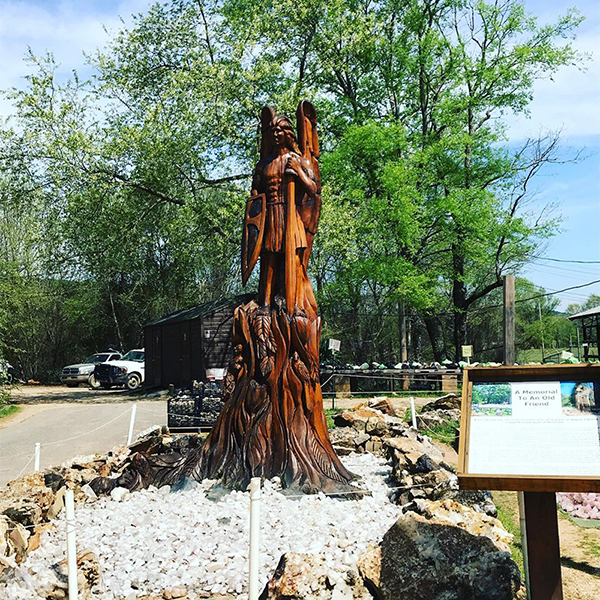 By 1981, Wegner was ready to take a huge step forward: participating for the first time as a vendor in the annual Tucson Gem & Mineral Show, one of the industry’s top venues. He completely sold out his limited inventory days before the show ended. Two years later, he took a semitractor-trailer loaded with quartz crystals from his mining operation to the Tucson event and “sold almost everything except the truck.”

Wegner says the current demand for quartz crystals isn’t what it was during the days of the metaphysical philosophy craze. “We’re still shipping overseas,” he says, “but not at the level of a dozen years ago.” Back then, he had a branch business operating in Burbank, Calif. It wasn’t unusual for Wegner’s crystals to appear as props in television shows and movies, and they soon became trendy with the Hollywood crowd. According to Wegner, actress Jane Fonda is among the many celebrities who’ve bought his Arkansas crystals.

Realizing that “people want to get out and have an adventure in nature,” Wegner began offering the public access to his property. A variety of excursions are available for tourists, and several opportunities are ideal for children. But expect to get dirty. 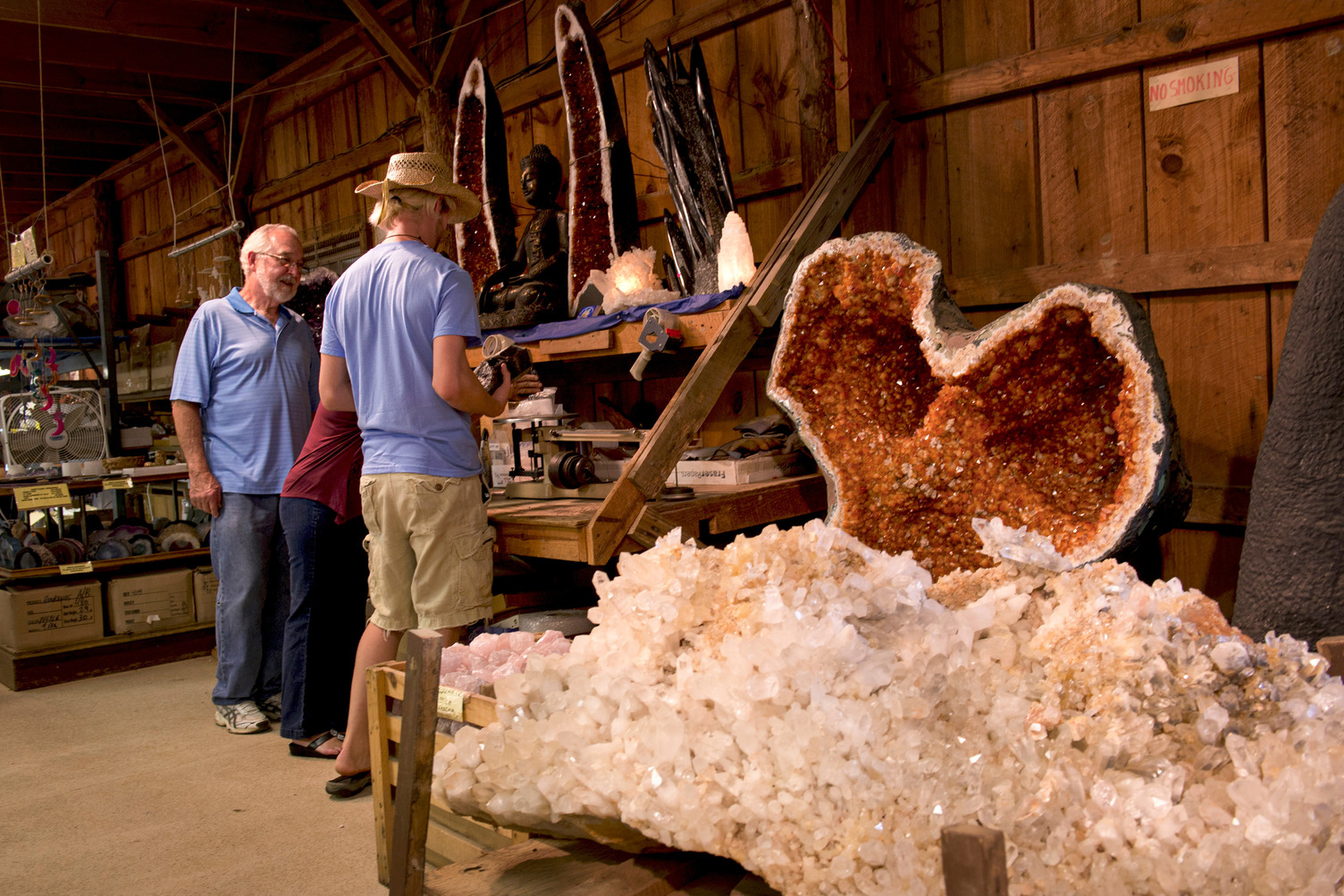 Although a native of Chicago, Wegner is also a big proponent of the countryside — a healthy, natural countryside, that is. Using various governmental programs, he’s planted several hundred thousand pine trees on his land and has also built 10 ponds on the property. He’s made every effort to make sure his commercial actions are environmentally responsible and sustainable, a “green mining operation” in his words. Open-pit trenches have been reclaimed by grading, contouring, mulching and replanting the areas. In more recent years, he’s started using “seed trees” to promote natural propagation.

Wegner has recognized Native American interest in the quartz crystals, even inviting local members of the Ouachita tribe to hold their powwows on his property. Likewise, numerous school groups regularly visit the mines.

Wegner Crystal Mines has been a thriving enterprise for 40 years, keeping a dozen full-time employees on the payroll. That original barn that stood on the property is now a 10,000-square-foot warehouse and gift shop. About half of the business is devoted to wholesale, and tourist trade makes up the rest. Visitors come from all over, but Texas is the No. 1 source for tourists. International guests are not uncommon, with a group of high school students arriving from Japan every summer. And if you’re wondering about the quality of the experience, just look at the Wegner reviews on TripAdvisor (4.5 out of 5) and Facebook (4.8 out of 5).

The COVID-19 pandemic has had a huge impact on Arkansas tourism, to include temporarily closing down public visitation to the Wegner Crystal Mines. When things get back to normal, Wegner will be offering three “Crystal Forest Mine” tours daily (9:30 a.m., 11:30 a.m. and 1:30 p.m.) among other digging options. Check out the company website (www.wegnercrystalmines.com) for the latest updates or call (870) 867-2309. Wegner Crystal Mines is located west of Hot Springs near Mount Ida. 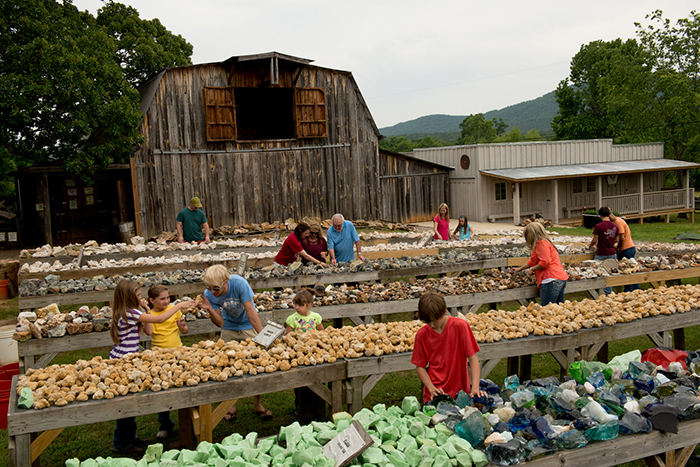 You’ll be greeted by a magnificent likeness of Michael the Archangel, a 15-foot work of chainsaw art by Gary Keenan. Carved from a 150-year-old oak that had been damaged beyond repair by lightning, the sculpture towers over the property, welcoming guests from around the world.

By the way, I interviewed Richard Wegner for this article on Earth Day 2020. After our conversation, he forwarded these additional remarks: “Since the pandemic, our air and water are significantly cleaner, showing that we have the power to begin reversing the damage that we are causing to our home, Planet Earth. We can practice Earth Day every day. We are all in this together. Together we can create a bright future for all.”