A Cut Above: Barbershops Make A Comeback for a New Generation

by Dwain Hebda | Photos by Jamison Mosley and Sage Duke

A towheaded lad of about six sits straight and motionless in Cody “Coco” Mayes’ barber chair. Nothing moves but the kid’s eyes as Mayes touches up the whitewall ‘do, shaved up past the kid’s ears with a dollop of combed locks on top like a crown.

The boy’s eyes take in everything – his older brother playing checkers with his mom in the waiting area, the line of grown men awaiting their turn in the chair, Mayes’ kaleidoscopic tattoos, his father’s approving nod. The child doesn’t twist or fidget until Mayes brushes him off, helps him off the skateboard deck laid across the arms of the barber’s chair as a makeshift booster seat and offers a high-five.

“There you go, dude,” Mayes says, grinning like the turquoise sugar skull inked over his left bicep. 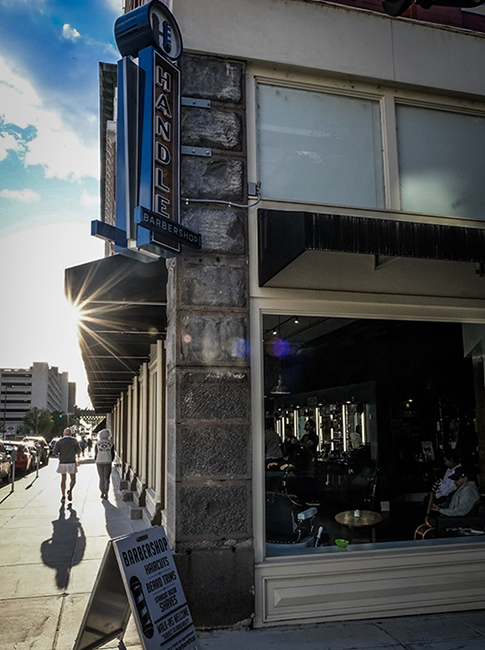 Saturday is a big day here at Handle, a barbershop on a prime, sunny corner of downtown Little Rock. Men and boys of all sizes and ages drift in for their grooming underneath a haze of the blues howling from a speaker at stage right. Customers follow, another after another, all day long.

Being so new, Handle isn’t yet as cool as it wants to be – the retro vibe is more stylish than gritty – but the four haircutters here are doing their part, their disparate personalities paying off in full Saturday rosters like this one. Mayes, the head barber, sets the tone with a blend of engaging customer banter and punkabilly attitude while the other three – an L.A. homeboy, a broad-grinned Cuban import and a slight local with musical chops – fall into their places.

“I attribute a lot to the barbers,” says Lane Guthrie, Handle owner. “Between them, there’s probably more than 50 years of experience. Cody is a hard worker and just kind of took that lead, brought in two more barbers from the same place he was. Then we got busy enough that we brought a fourth one in who actually came to us because he saw us and heard about us and was ready to do something different.

“They all have a part they’re best at, but they can all do it all. I always said we’ll never put a ‘Help Wanted’ sign out; we’ll build a shop with a good vibe where good barbers will come to us. We just kind of let it evolve organically. We hit a snag here, snag there, and we just fix it and move on.”

Guthrie, who does not cut hair, got into the barbershop business after seeing such places starting to mushroom in city after city he visited. After meeting Mayes, he opened Handle in February, modeled partly on a shop Guthrie’s girlfriend saw in Portugal and partly on his memories of old-school barbershops in his youth.

“My granddad always took me to the barbershop, and I loved the history of it,” he says. “[At Handle] no one is turned away; if a business guy walks in or a skater kid decides to walk in, nobody is judged. It’s all just casual, for the most part.”

The corner barbershop has long been held sacrosanct as a male enclave, the kind of place guys could get a cut and a shave while the gallery bickered about politics, chortled about women and generally turned off the filters required in other parts of society. What country clubs were to the one percenters, barbershops were to Everyman; the original man cave, a place where a guy might learn how to swear, glimpse his first Playboy and generally decipher, for good or ill, the street-level societal codes of masculinity for his day.

Barbershops never really went away but have come to their current popularity only recently. Hairstyles had something to do with it – the Beatles gave barbershops a gut punch in the 1960s that bled into the long hair of the 1970s while men in the 1980s started going to salons for styles and color jobs their grandads wouldn’t have dreamed of.

Things got serious for the industry in the 1990s – according to census data, barbershops lost nearly one-quarter of locations between 1992 and 2012 to low-cost chain alternatives and even at-home barbering equipment. With that gear – or a girlfriend in beauty college – guys forsook the tribe lurking behind the spinning red, white and blue pole.

But all that’s changed in the past five years or so. In 2017, Forbes magazine reported barbering was the nation’s fastest growing profession and predicted the industry would reach $26 billion annually by 2026. Today, the barbershop boom draws both from those who remember the shops of yore and the many more who never got the chance to experience it. 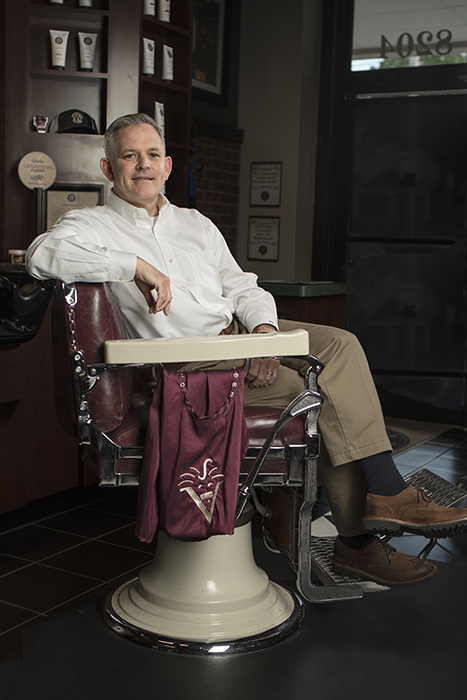 “I’m 53 years old,” says Jeff McKay, owner of V’s Barbershop in Little Rock. “My generation is stuck between the way things used to be and the way things are in terms of information. I didn’t grow up with computers, but I’ve been forced into them in order to survive economically.

“My generation is out of its element because we weren’t born in the information age and life moves so fast. I think people want to just put down the cell phone and the tablet and the computer and walk into a place and just relax for 30 minutes, just kind of unplug.”

McKay, who holds the V’s franchise rights to the whole state, just opened his second Little Rock location. Like Handle, his shops are still pretty new, too new to have earned the kind of worn-in status within its neighborhood, something that only comes with time.

“It does take time,” he said. “My grandfather took me to [a shop] in Clarendon, Arkansas, quite frequently, and I can remember all the men in the town would gather at the barbershop, and they would talk small-town politics and talk about women. That’s kind of what you aspire to be, something more than a barbershop.

“We want guys to come into the shop on a Saturday and not get a haircut, just grab a cup of coffee and sit around and talk, because that’s what barbershops used to be.” 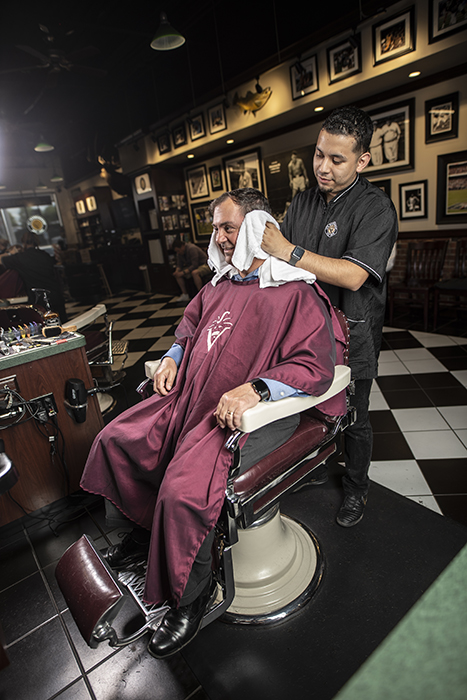 David Harrison receives a hot towel treatment before a shave.

V’s traditional, uniform look – dark wood throughout, myriad framed sports photos placed just so – is geared toward men, and every customer in line on this Saturday was male. McKay reports a sprinkling of short-haired women clients, but the most pronounced female presence was among the barbers themselves, three out of four to be exact. That fact alone testifies to the evolution of the modern barbershop: Women didn’t outnumber men in the barbering ranks until 1985, the overwhelming majority of whom were headed for salons.

McKay, who has designs on expanding his locations across the state, says he doesn’t hire barbers just for appearances but looks for professionals – male or female – who deliver the best customer experience. If that means hiring a staff that doesn’t square with what most people first envision in a traditional barbershop, so be it. 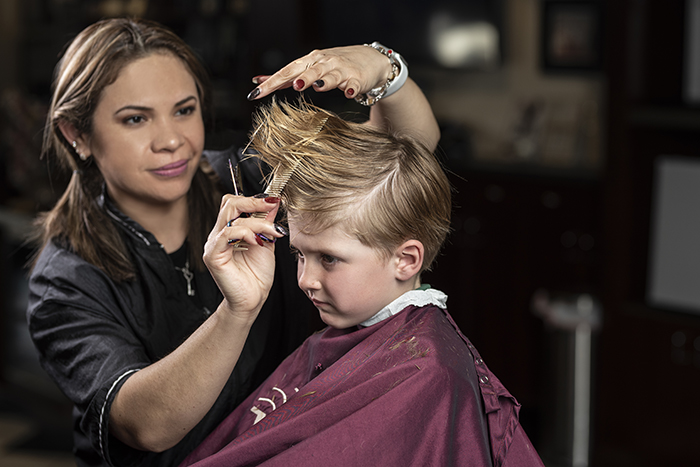 Women, like V’s Letty, make up 75 percent of barbers today.

“I asked Lou Holtz, ‘How do you put together a national championship football team?’ His only response was, ‘You get rid of the guys that are not motivated to win a national championship.’ That’s kind of the way I look at my barbers,” McKay says. “If you’ve got a big ego, and you’re here for yourself, and you’re only in it for the money, you’re really not the guy for me. I might be able to make a ton of money off you, but you’re not going to add to what we’re doing.

“You can’t just sit there and be a barbershop and expect the community to embrace you. You have to go out and embrace the community.” 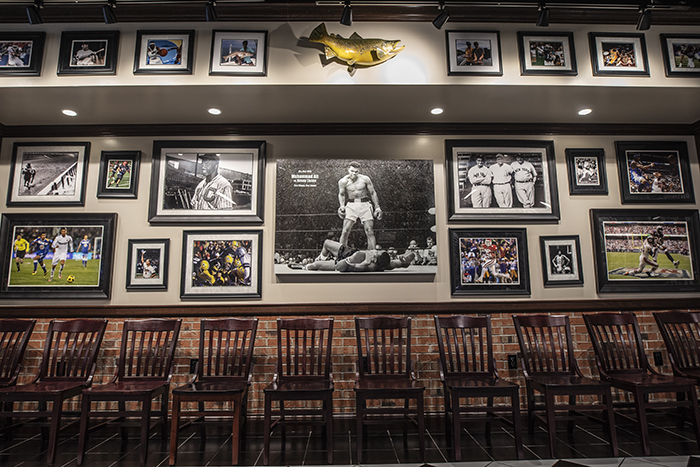 Larsen Tapped for Expertise on Warriors Featured in ‘The Woman King’
September 28, 2022
Go to Top
Never Miss An Issue!