A Cut Above: Knifemaking in Arkansas 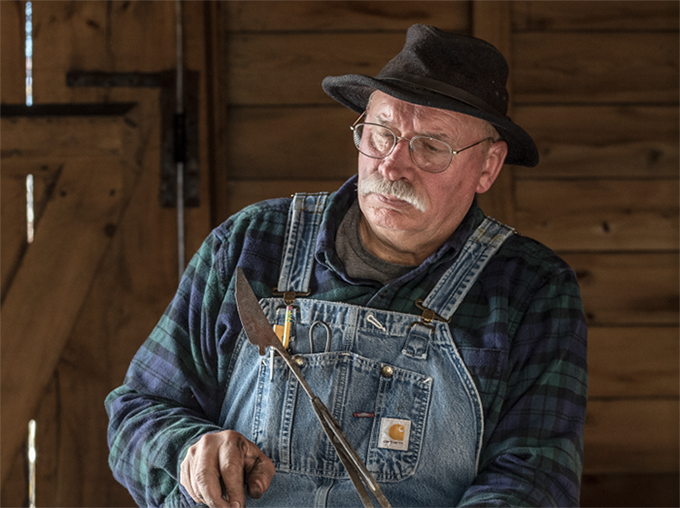 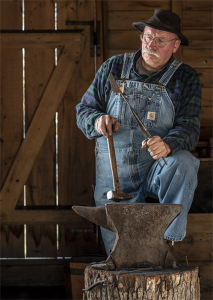 Behind every great knife is the ancient art of bladesmithing. And no other place in the world has contributed to that art quite like Arkansas.
From the advent of the Arkansas toothpick and the Bowie knife – crafted by James Black in southwest Arkansas in the 1820s and made famous by pioneer Jim Bowie – to the formation of both the Knifemakers’ Guild and the American Bladesmith Society, Arkansas has long served as the geographical center of knifemaking in America.
Of the 120 internationally recognized master bladesmiths, 12 percent are from or practice in Arkansas. What started in Washington, the home of James Black and location of the world’s first bladesmithing school, has spread across the globe.
“Arkansas is probably the single most important state when it comes to handmade knives,” says Goldie Russell, wife of the late A.G. Russell, one of the country’s most accomplished knifemakers. She joined him in the knife business in 1988 and continues to steer their beloved company.
The popularity of knifemaking in Arkansas, she says, started with Black in the 1820s and multiplied as a result of her husband’s and his colleagues’ efforts more than 150 years later, in the 1970s and 80s.
“Old Washington is where James Black’s blacksmith shop was, where he supposedly made the first Bowie knife for Jim Bowie,” Russell says. “A.G. came to Northwest Arkansas, and he created A.G. Russell knives. It was his idea to create the Knifemakers’ Guild. There were some other men who came together and created the American Bladesmith Society, which revolved around Old Washington.”
In an effort to advance the art of handmade knifemaking, A.G. taught others how to make knives, and he hired professional knifemakers like Bob Dozier to do the same. “When people start making something – whether it’s knives, guitars, duck calls or anything else – and they become very good and it’s creative, a community develops,” Russell says.
As that community grew, her husband wanted to put the world on notice. Knifemaking was an art. The time had come for others to appreciate it as such.

The knife designed by Jimmy Lile that would gain fame in Sylvester Stallone’s First Blood. Photo courtesy of John Hill.

“A.G. spent a lot of money promoting knifemakers,” Russell says. “He knew some writers of gun magazines, and he would call on them often, trying to talk them into writing articles about knifemakers. He knew that if he could get knifemakers to come together, to form a group, they would get their attention.”
And that’s what they did, when, in 1970, he and colleagues formed the Knifemakers’ Guild. A.G. served as its first president.
Roughly two hours south of the Russell’s Springdale shop, Russellville knifemaker Jimmy Lile was beginning to grab the world’s attention with his style of blade. Lile, who would come to be known as the knifemaker to the world, had begun developing a reputation out west, in California.
“There was a gun store in Los Angeles called the Pony Express. The owner sold some of Jimmy’s knives,” says John Hill, who met Lile when he was 12 years old and eventually went into business with the celebrated knifemaker. “Sylvester Stallone collected his knives. One day, Stallone reached out to him and said, ‘Hey, we want to do a movie, and we want to use one of your knives.’” 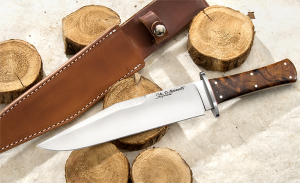 The movie? First Blood, the first installment in Stallone’s Rambo series.
“The rest,” says Hill, “was history.”
Arkansas’ rich knifemaking history is not lost on the smiths of today. Master bladesmith and the Historic Arkansas Museum’s resident blacksmith Lin Rhea is a student of that legacy and shares it with all those who visit him.
“I forge my blades; I do it the old way,” says Rhea, who learned the art in 2002 at the Moran School of Bladesmithing – the world’s first school of bladesmithing – at the Historic Washington State Park in southwest Arkansas. “There’s a lot of history, up front, that goes into that.”
From his position at the Little Rock museum, Rhea has the opportunity to study the art of knifemaking in a way very few can. Because of that opportunity, Rhea knows it is also his responsibility to share what he’s learned with his peers.
“The fact that I get to study by making and recreating historic objects, I get a perspective that is so unique,” he says. “I go to my peers, and at the risk of becoming an irritation, I try to encourage them to study and draw from historical inspirations. The old, historic makers are my inspiration. Dr. James Batson, of Huntsville, Ala., has written books on the historic relevance of these knives, Jim Bowie, James Black. These are characters that made the knife a household name.
“I’m in such a unique situation here at the Historic Arkansas Museum,” he adds. “I have documentation, research materials and the historical objects I can look at and handle. I can get the feel and balance of historic knives and understand why they made them that way.”
Rhea spends the bulk of his time in front of a fire or leaned over an anvil, whether it be at his home shop or the blacksmith shop at the Historic Arkansas Museum. The tremendous amount of “anvil time” he gets each day has allowed him to develop his own style of knife, one that draws on both historic and modern elements. He calls it the X-Rhea. 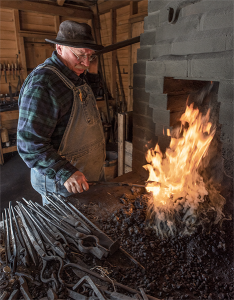 “It took me three or four years to develop this process,” he says, hammering away at a narrow piece of steel that will soon become a coveted blade. “I wasted a lot of steel. If you’re recreating something, you’re reverse engineering. If you’re creating something, you only have that image in your mind. It may take 15 times, but eventually, you’ll be satisfied.”
Logan Pearce is a third-generation bladesmith and, at 30 years old, one of the state’s youngest fulltime smiths. He’s been forging knives for as long as he can remember.
“My grandfather was a bladesmith,” says Pearce. “He taught those skills to his sons and my mother. When I was a kid, he babysat me. As young as five or six years old, he would give me nails and let me forge them into small knives with a miniature anvil and ball-peen hammer.”
Pearce understood from a very young age the impact this generational art has on his home state.
“We’re bladesmiths,” he says. “Arkansas is a forged knife state. I go to Ohio, Nevada and other places for shows, and they just don’t have knife forgers like we do. With bladesmithing, you have the fire. It’s traditional. That speaks to people; and when they think of knifemaking, that’s what they think. That’s the art of it, doing it by hand in front of a fire.”
Pearce believes that every knife made by a custom knifemaker is unique to the man or woman who created it. And each knife, he says, is work of art. “It’s not just a tool. It’s a part of those who made it because they put so much time and effort into it,” he says.
“If you were to show me a custom knife, I could tell you who designed it just by looking at it,” adds Pearce. “Everybody has a different style, and each knife is a reflection of themselves. It sounds corny, but it has a part of their soul imprinted in their knife.”
Rhea agrees.
“The reason you can recognize someone’s knife is because it represents the image in their head of what a knife should look like,” says Rhea. “It’s uniquely theirs, their vision of what’s proper…
As a new knifemaker develops their skill, they develop a style. That takes years… Knives are a medium for art.”
Goldie Russell, who studied pottery in college and taught art, recalls the first time she saw knives for their artistic potential.
“When I first met A.G., in 1983, he took me into his office and showed me the handmade knives he had on consignment,” she says. “To me, they were exotic. I only knew butcher knives, kitchen knives and maybe pocket knives. Then he told me what they were worth, and I was floored.

“That summer, I went to my first show,” Russell recalls. “I walked into this ballroom, and there were about 100 knifemakers there. I walked through there and was astounded that, from what I knew, all these people were making a living making knives. I was astounded; they were making all these beautiful knives and were being successful at it.”
Even the more tactical knives created by Lile are revered for their beauty, says Hill.
“Being a sportsman lead him to this art,” he says. “And when [Lile] realized that these knives could be made beautiful, he made them beautiful… It’s more than just a knife. A gift of a knife is a gesture of friendship. It’s not a knife; it’s a symbol.” 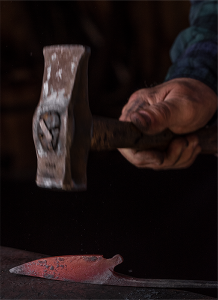 The Arkansas Knife Show will be held at the Statehouse Convention Center in downtown Little Rock on Feb. 15-16.

The event, in its 30th year, is the largest custom knife show in the country, according to Logan Pearce.
“About half of us are bladesmiths,” he says of the show. “The others are folding knives and tactical [knives]. We have such a large base of collectors; there will be people here from all over the world. We have frequent buyers coming from Germany looking for $3,000 knives.”
Pearce, owner of Pearce Knives in DeQueen, recently took the helm for the annual show, injecting it with both youth and enthusiasm.
“They were more focused on just having a show,” he says. “I changed it up, making it more for the knife community rather than just an event. There used to be a banquet, years ago. I brought it back. It’s become a great opportunity for this community of people to get together and have fun.”
The show kicks off of Friday, Feb. 15, with award judging and a banquet beginning at 6 p.m. Events start at 9 a.m. on Saturday, for gold pass members. The general public will be admitted at 11 a.m., and cutting competitions begin at 4 p.m. For more information, visit arknife.com.