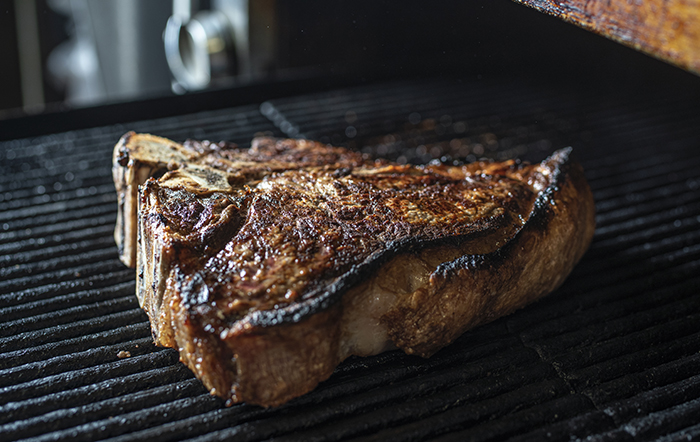 ‘cause no one ever celebrated with salad

There are few things in this world as enduring or endearing as the American steakhouse; true, honest-to-goodness, old-school enclaves where one whiff inside the door and you know exactly where you are and why you’re there.

Every town of any size and measure of self-respect has one, clad in buckaroo memorabilia or wrapped by leather-shrouded banquette booths. Steakhouses don’t have to be dark, but the best ones are; they all don’t require you to dress up, but the best ones make you feel like you should.

Steakhouses are the last vestiges of undying, unwavering cool and unrepentant, undiluted political incorrectness. No one really needs 22 ounces of impeccably marbled beef at one sitting – plus sides – but that’s not the point. The largesse is part of the appeal, each bite striking a blow for sanity in a world gone mad over fat, cholesterol and the need to eat daintily. I have vegan friends who disagree vehemently, of course, and I love and respect them dearly for their life choices. Mainly because it leaves more meat for the rest of us.

See, there are reasons people don’t mark major life moments over a kale and endive frittata: every step in the life cycle of a steak takes care and work and expertise. Steak must be raised intentionally, cut and trimmed skillfully and prepared expertly, effort commensurate with the special occasion for which it will be consumed.

But it is not just the entrée that draws us to steakhouses. Heck, some of the best steaks you or I ever will ever have may come from some beef wizard on a home grill. However, the steakhouse experience itself, be it white tablecloth or beef-barn throwdown, cannot be duplicated in any backyard. Sammy Davis, Jr. and Dean Martin didn’t hang out on some square’s patio, after all, and odds are John Wayne and Steve McQueen (or Katherine Hepburn and Ava Gardner, for that matter) didn’t either.

No, we didn’t invent steak or the cowboys who drove the herds, or the fine art of butchering, or the first meeting of fire and ribeye. All of these preceded our great Republic. But in true melting pot fashion, nowhere on earth do these elements come together better than in the American steakhouse. And with a baked potato on the side, no less. 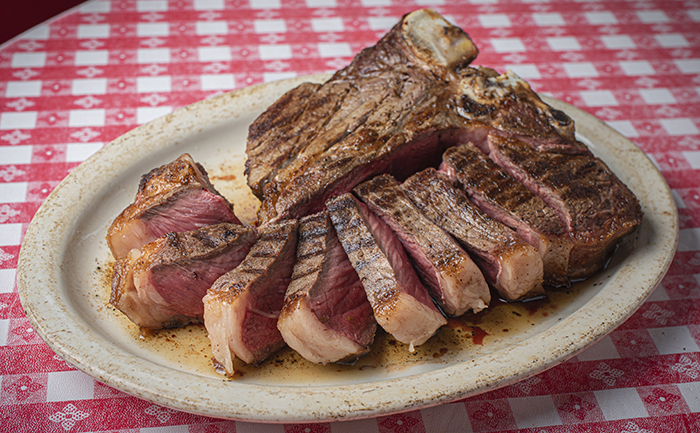 Technically, Doe’s is Mississippi-bred, but Arkansas has more franchise locations of the steak-and-tamales staple than any other state, so that makes it ours. Besides, from wherever Doe’s may have sprung, the sweetest fruits still reside at the wonderfully shabby corner of Markham and Ringo in Little Rock.

“We start with good quality beef,” says Katherine Eldridge, second-generation owner. “We age it 21 to 30 days, which is very important. We cut our own meat every day which, I think, we’re one of the few that still does that.”

The staff is also finely aged but in years not days. Chef David Brown has been turning out Doe’s signature steaks by the pound for 30 years, and some wait staff members have been taking care of customers for more than a decade.

“They know the product well, and they take pride in our business because that’s their livelihood. This is what they’ve chosen for their career,” Eldridge says. “My staff, they’re like family.”

WHAT TO ORDER:  Any cut is wonderful, but the porterhouse is a special treat if you can grab it before they run out. Doe’s tamales and shrimp appetizers are mandatory.

HOW TO GET IT:  Medium-rare, Eldridge insists.

THE EXPERIENCE: Bill Clinton-philes should know Doe’s as a favorite of the former governor and president. The famed “war room” where he plotted his road to the White House sits just beyond the kitchen. 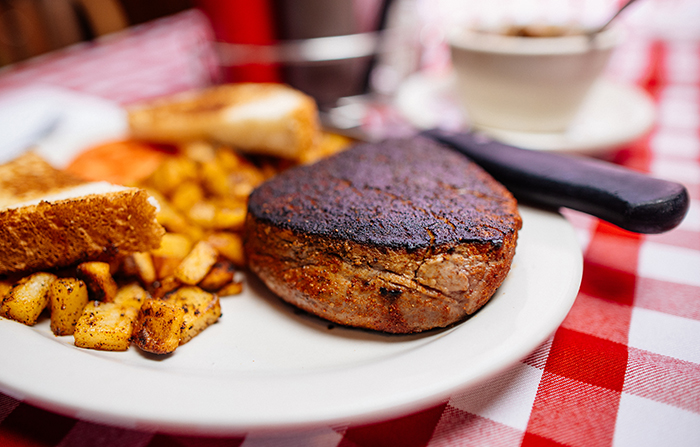 Nick Wright appreciates the history of Herman’s Ribhouse, largely because it mirrors his own.

“I’ve been at Herman’s since 1996,” says Wright, who with his wife Carrie, has owned the restaurant since 2000 and the building since 2009. “I learned everything about cooking here at Herman’s from Bruce Barnes; he now owns Mister B’s Steakhouse in Rogers. I started washing dishes and working my way up.”

“Honestly, there’s not really a complicated process. We buy it; we wet-age it 21 days; we cut it; we season it; we cook it.”

The Wrights bring a similarly fundamental philosophy to steakhouse operations, which may explain the establishment’s longevity and fierce customer loyalty.

WHAT TO ORDER:  Nick recommends the filet, available in 5-, 6-, 8- or 10-ounce cuts. Pair it with your choice of potato or the excellent macaroni and cheese.

HOW TO GET IT:  Medium-rare, per the owner.

THE EXPERIENCE: Experts tack on a rib or two as an appetizer. They also know it’s a tough table to get on home football Saturdays, so plan accordingly. 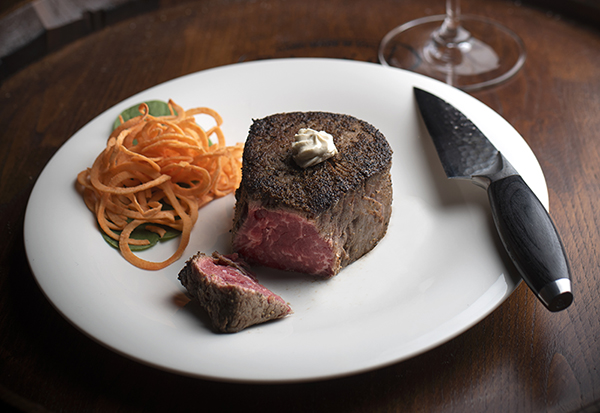 Veteran restaurateur Jerry Barakat launched Arthur’s and with it, a whole new level of steakhouse dining in Little Rock. Today, there are few that can match Barakat’s standards for quality of food and service.

“We have been selected as one of the best steakhouses in the nation from each state; we are in the top 51 steakhouses in the nation three years in a row,” he says. “I will not serve you a steak if it’s aged less than 28 days and I will not serve you a steak that is not dry-aged prime beef, the Wagyu Australian or the Kobe Japanese.”

The meat may take center stage here, but it’s the skilled and attentive staff that underpin the high-end restaurant’s continued success.

“My kitchen people and front-of-the-house staff represent the place very well; they make the place look very good,” he says. “I am very proud of my people.”

WHAT TO ORDER:  There are no wrong choices, but pressed for a recommendation, Barakat suggested the Alley’s Bone-in Filet or the Arthur’s Filet.

THE EXPERIENCE: Cap a celebration by tipping off the wait staff and the honoree’s dessert will arrive with their name written in a chocolate script. 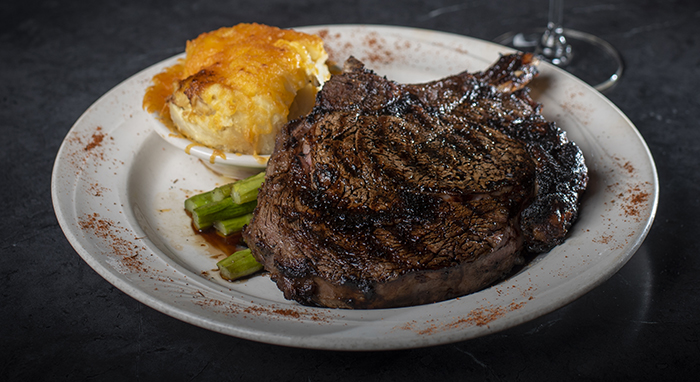 Sonny Williams’ has arguably the coolest neighborhood to call home, operating from a stylish corner space in Little Rock’s River Market. Its timeless décor and urban vibe lend an extra-special ambiance to this central Arkansas favorite. And as the neighborhood continues to blossom, Sonny Williams continues to draw discerning tastes from a new generation.

“Some of that demographic has fallen off, but those young people still come in,” says Jimmy Young, general manager. “We’ve been here 20 years, so we’ve had to keep up with new customers. You know you’re going to get good service and good wine and all that. They also want smaller portions and some healthier options, so we offer those as well.”

“We’re definitely more of a special occasion type of place for younger customers, but they do come in. I think when people really want to impress a date, they want to take them to that traditional steakhouse restaurant.”

WHAT TO ORDER: Make it a night to remember with the cowboy bone-in ribeye. Asparagus and garlic herb mashed potatoes round out the signature Sonny Williams’ meal.

HOW TO GET IT: Even if you normally go rare, ease into medium rare for the bone-in monster. Nothing past medium, obviously. 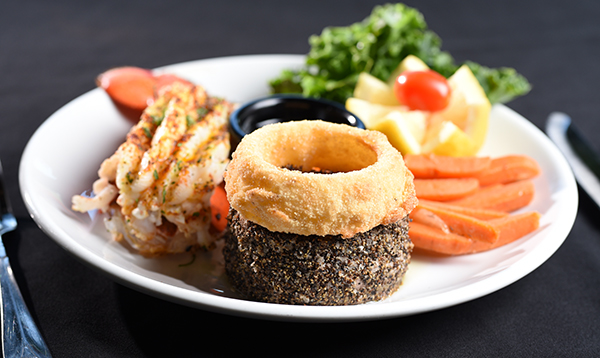 Owner Frank Fletcher is a larger than life personality in the Natural State for all of his business endeavors, and Riverfront Steakhouse is no exception.

In 13 years as general manager of the Riverfront Steakhouse, Donnie Rieathbaum has seen a little bit of everything. But what makes a great steakhouse hasn’t changed a bit.

“The biggest thing is you deal with good cuts of meat,” he says. “But your service on top of that, that’s what sets you apart more than anything.”

Fletcher, Rieathbaum and crew take this to heart every day, making Riverfront Steakhouse one of the country’s best and that’s saying something considering it’s hidden inside North Little Rock’s Wyndham Hotel.

“We cook in an infrared cooking system, which you don’t get at a lot of restaurants. It makes sure you don’t get a charred flavor,” he says. “We’re going to cook it the same way every time. We’ll give you choices — we’ll give you light seasoning; no seasoning; heavy seasoning. You have to feel out your guests to make sure you’re getting that steak just right for them.”

WHAT TO ORDER: Rieathbaum recommends the bone-in ribeye for large appetites. For a smaller meal, get the regular filet or spring for the larger portion and split it.

HOW TO GET IT: Medium-rare is the preferred doneness.

THE EXPERIENCE: Riverfront’s seasoning – a black pepper and sea salt mixture liberally applied before cooking – can overpower some palates. Rieathbaum suggests first-timers order light seasoning and work up from there. 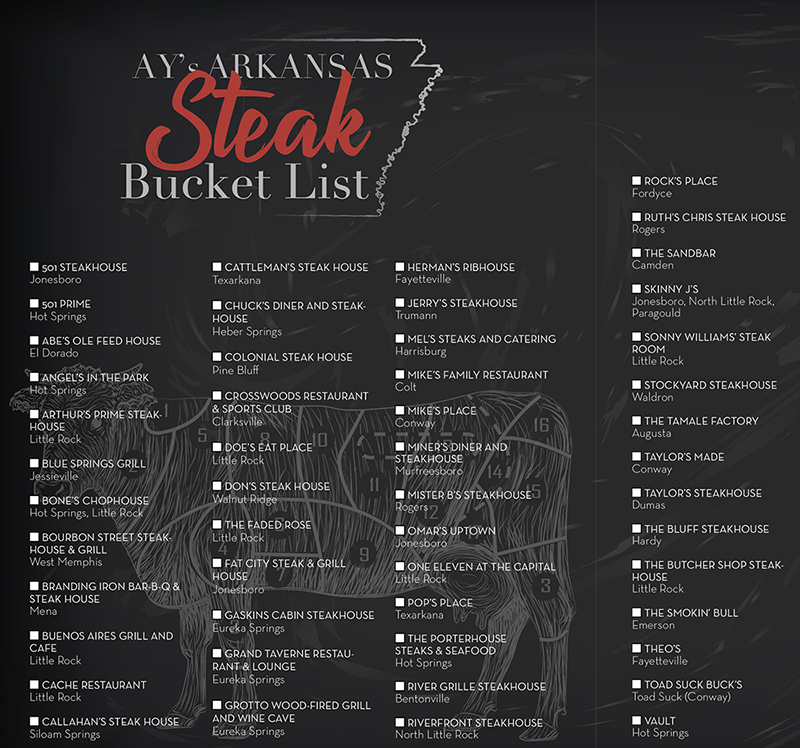 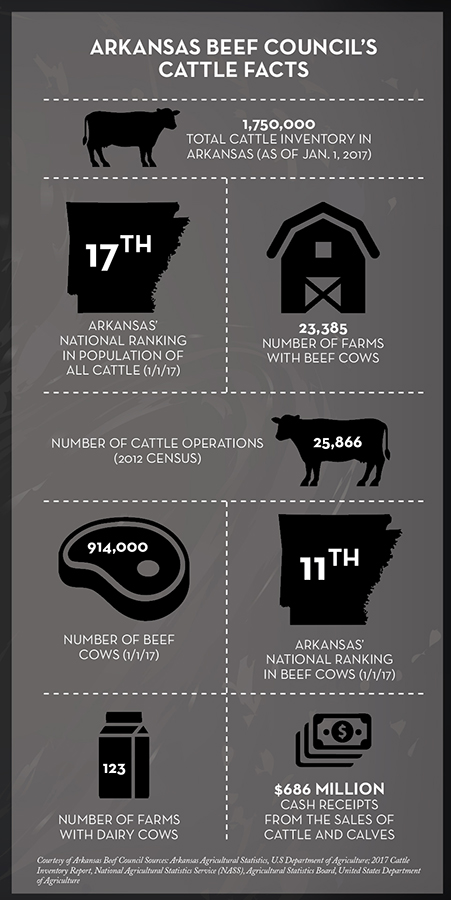