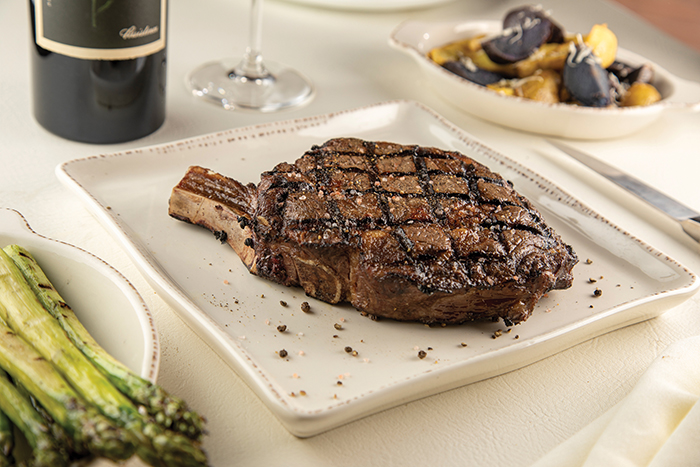 Ask anyone in the culinary business and they will tell you — for the best of anything, go local. Get with the people who know how something is supposed to taste, give them the freshest ingredients, and get out of their way. You’ll pay, sure, but you’ll still be smiling the next morning.

Steak is the medium-rare exception. You can find a good piece of meat just about anywhere you go in this great nation, whether it’s cattle country or not. In fact, one of the true joys in life is finding a place that shouldn’t be as it is, where it is — some little aberration that delivers, time and again, in a spot that you just stumbled over by chance.

The Red Oak Steakhouse is kind of like that. With all due respect to the renaissance city of Pine Bluff, you don’t expect to find one of the best plates in America there, and being located inside a casino — long associated with the $1.99 buffet — casts its own shadow as well.

But make no mistake, folks — Red Oak Steakhouse, nestled into Saracen Casino Resort, is destined for greatness on a global scale. In a state blessed with exceptional food experiences — so much so that to name one is to sleight three others — Red Oak has critics and guests alike slobbering all over themselves. 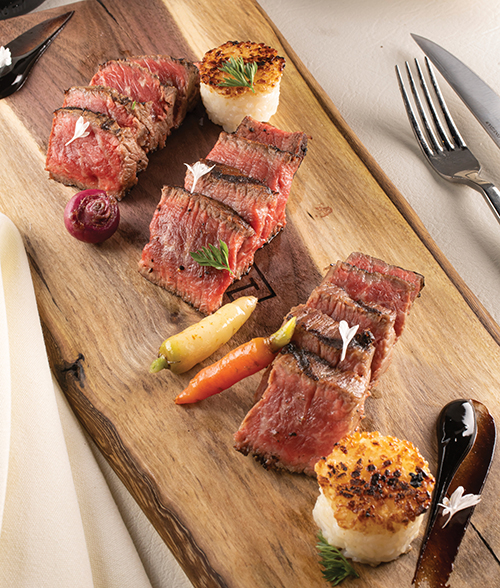 Dining at its finest at Red Oak Steakhouse. (Courtesy)

“We have to do things that nobody’s done before. We don’t want to sit here and open other food magazines to come up with an idea,” says Todd Gold, director of food and beverage for Saracen. “If you’re not original, you’re not anything.

“Our food is fresh, it’s the finest ingredients, it’s prepared where it looks like it belongs in a magazine. It’s beautiful. And it blows you away when you eat it. I challenge anybody else — anybody else — to go head-to-head with us. … I’m willing to say we are the best restaurant, not just steakhouse, in the state. And we will be in the region soon. We’re heading that way.”

It would be easy to take potshots at such a claim, given the many upper-echelon steak experiences to be had in the Natural State. But there’s a growing body of evidence Gold is somehow being modest. Red Oak elevates the art of the sizzle to mind-bending levels. And to understand just how far they’re willing to go to stay there, you need only look at their raw materials.

“The quality of the meat is obviously the best we can find,” says Joe Coleman, executive chef at Red Oak. “We have a few different categories of meat. One is a prime option that we dry age in-house for 30 days. Then from there, we go to a wagyu product.

“And then we go up a step further, which is our Kobe products. The Kobe is a wagyu, but it’s a specific type of cow that has a 2,000-year-old bloodline in one region of Japan. It’s the elite of the elite, the best of the best.”

True wagyu beef, and Kobe in particular, follows a dizzying set of guidelines and regulations in Japan, resulting in abundant counterfeits and knockoffs. At the time it opened, Red Oak was one of only 38 restaurants in America granted a license to serve the delicacy.

Needless to say, this doesn’t come cheap, and working with such expensive ingredients is enough to make even an elite pro like Chef Coleman’s hands a little wobbly the first time out.

“The first time we got the Kobe in, I was so scared about it,” he says. “I just researched and researched, trying to figure out how can I get the most out of this muscle without busting the paint. … It finally came in. I looked at and was like, ‘All right, relax. It’s only a $7,000 piece.’ It was a little intimidating. I’ve been around beef for years, but it’s a little different when you factor in that ‘cha-ching’ factor.”

Gold says, stone-faced, “The Kobe is $20 an ounce. When we get a ribeye and a strip loin end, we’re talking about two muscles. You can hold them with two hands, they’re not huge. It’s an $11,000 order. If Chef Joe’s knife slips, or if he cuts something too small, he probably just burned up $250 in one cut. That’s where the craziness comes in.”

The hierarchy of steak can be more than a little confusing. In the United States, it used to be simple — three USDA grades included select, choice and prime, with prime being top of the line. That rating system, still in place today, held for decades as a marker of quality and tenderness. The difference? Intramuscular fat content, which delivers both flavor and tenderness to a given cut.

And we’re not talking about a subcutaneous blanket of blubber, here; any fool can raise an obese bovine. It takes real skill to raise cattle where the fat permeates the meat (called marbling, like the striations of color in a stone countertop). The fat melts during cooking, lending moisture and flavor, as well as boosts tenderness, being softer and easier to cut than muscle.

The three USDA grades worked perfectly fine during the dark ages of pre-internet, pre-cooking channel, pre-foodie fandom. But as the world has grown smaller, next-level meat started to find wider demand. Atop this trend has been the Japanese Wagyu, of which Kobe beef is the pinnacle, which takes the fat-muscle ratio, turns it on its head and slaps it around.

The Japanese grading system employs letters and numbers to gauge quality, grade and yield. Without getting too far off into the pasture, A5 is the best you can get; within this category the marbling can get so dense the white fat turns the raw meat pink instead of red.

“You have to experience Kobe, but there’s only so much of that you can eat,” Gold says. “It’s so rich. It’s like eating foie gras. It’s not like you’re going to sit down and eat 10 ounces of Kobe.” 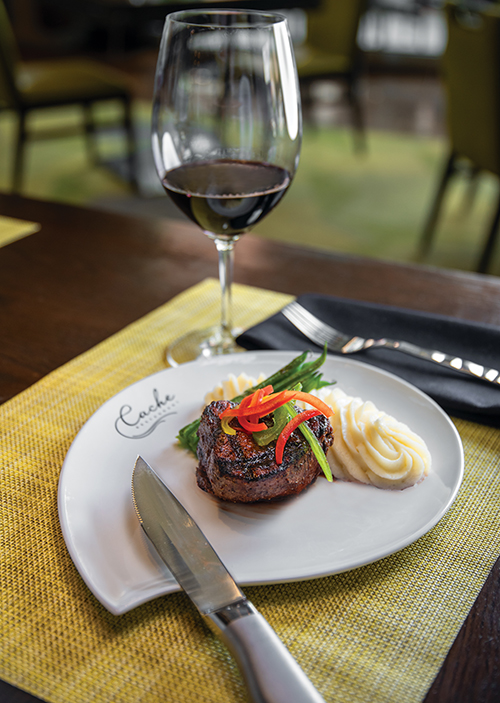 For those not ready to shell out the kinds of prices Red Oak commands for such fare, there are still plenty of other Arkansas options for a sublime steak experience. Cache Restaurant, located in Little Rock’s River Market, has formed a loyal following with a mix of elegance and simplicity in their acclaimed steaks.

Chef Payne Harding says there’s no secret to the restaurant’s stellar fare — it all boils down to quality beef and expert preparation.

“We buy Creek Stone Farm’s beef. It’s a very popular selection of beef in Little Rock,” he says. “What we do is, we’ll do a quick marinade on the steak of just canola oil. We’ll let it sit in that oil and marinate for 10 minutes or so. Then we’ll hit it with fresh kosher salt and fresh cracked black pepper. 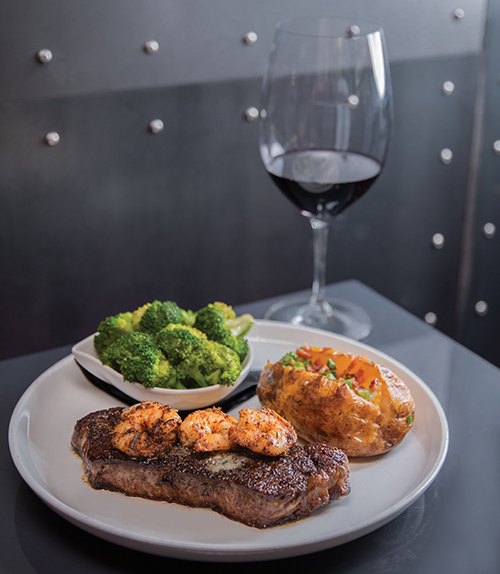 “We make an in-house rub, a special thing with garlic powder, onion powder and throw some black pepper in there and some other seasonings. We’ll hit it with that special house rub, and that’s going to accentuate the flavor.”

Chef Harding says that as with many things in the pandemic, the price of beef has spiked. But the restaurant buys appropriately to keep costs manageable. He also strives to provide an atmosphere that elevates the dining experience and, of course, deliver exceptional food that fills and feels familiar. (By the way, Chef says go with Cache’s strip steak, and, by all that’s holy, order it no more than medium.)

“After it comes off the grill, we throw it in the oven and roast it old-school method for about 10 minutes,” he says. “We’ll put a little topping of whole butter on the steak, put it in the broiler for about 15-30 seconds to let the butter melt, give it a good slip around on the sizzle tray, and then it’s ready to go.

“I don’t think there’s anything on the menu that’s more central to who we are and what we do than our steak. It’s that basic thing people love and come back to, time and time again. Pair it with a nice red wine, and it’s perfect.” 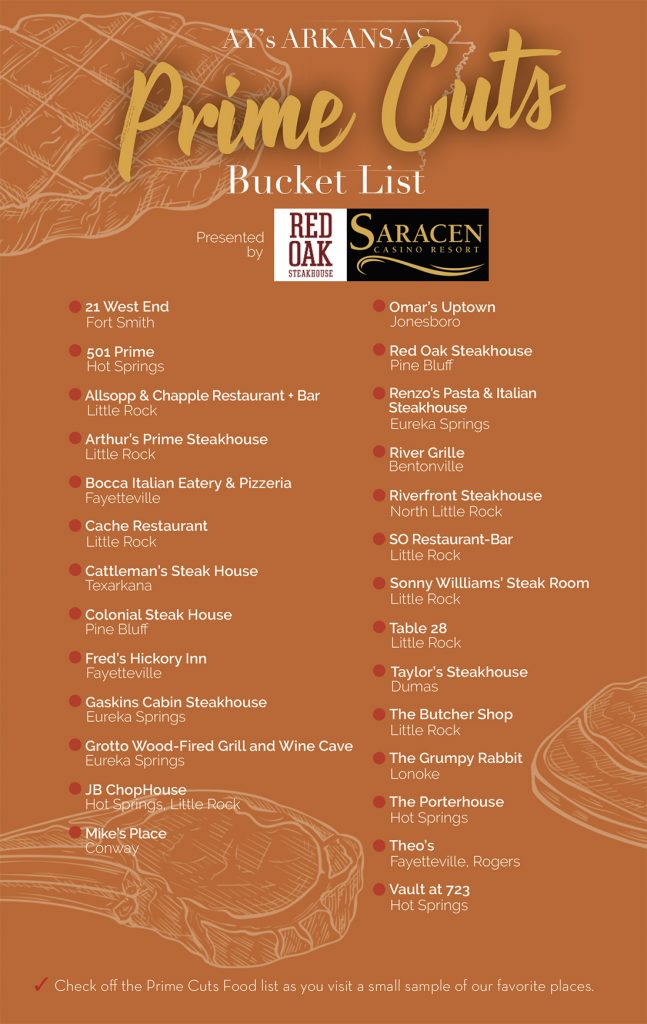