Lovin’ the Crew: Waymack and Crew 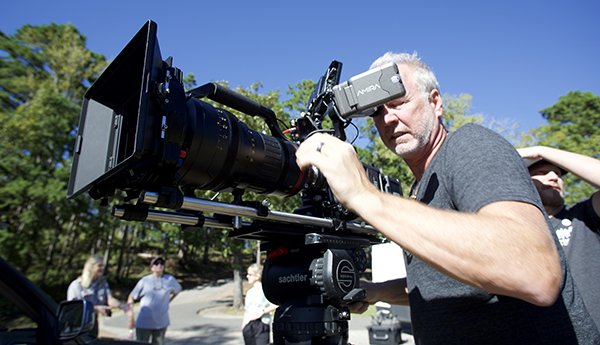 Whether Local or National, Dan Waymack and Crew Put Their Hearts Into TV Ad Spots

Dan Waymack and his team can say more in 30 seconds than most people can say in a day.

Waymack, the owner of Little Rock video production company Waymack and Crew, has been shooting catchy television advertisements for dozens of businesses including Allstate with deep-voiced actor Dennis Haysbert, Miller Lite, the U.S. Army and — more locally — Arkansas Parks and Tourism and the Arkansas Scholarship Lottery with its “This is Winning” campaign. 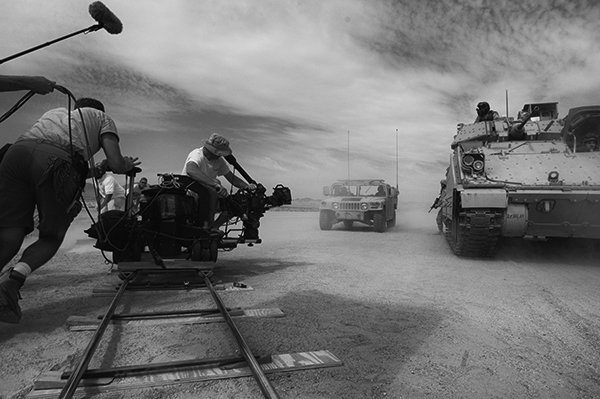 The company also has satellite offices in Bentonville; West Palm Beach, Fla.; and Chicago, where it works with ad agency Leo Burnett Worldwide, one of the largest agencies in the world.

In addition to shooting the 30-second television advertisements, Waymack also has traveled around the world filming documentaries for various cable television venues. His work ranges from a serious look at training procedures by U.S. Army soldiers for the A&E Network, which led to the service’s most successful advertising campaign to the more campy “Wives With Knives,” a true crime show featuring angry spouses. 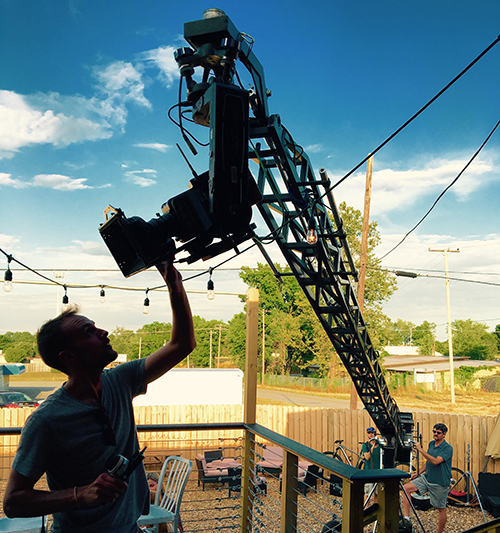 It’s been quite a career for a hometown Cabot boy who in 1986 began his production company on a school table in his mother’s house.

“We didn’t have a garage,” Waymack said. “My first editing suite was in my mom’s living room.”

He called his company Boomtown Productions and shot video for local and regional accounts. In 1992, he launched Waymack and Crew, hired about 15 people and moved to downtown Little Rock. He also opened the satellite office in Chicago where he produced several national campaigns for Allstate, Aleve, Kellogg’s, Whirlpool and the PGA. While there, Waymack built a new type of helmet rig, using a Sony camera to shoot spots for the Chicago Bears to create fan interest in the football team. 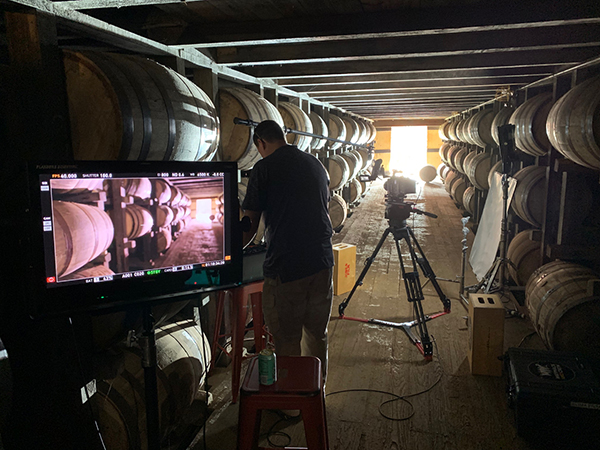 Kama Johnson, director of operations at Waymack and Crew, said, “The quickest way to explain our success is to explain that Dan puts his heart into it. Then, he surrounds himself with people who share the same heart. It’s a well-balanced group.”

Waymack agrees, saying that while many production companies eventually go out of business, Waymack and Crew has lasted because of the passion his workers have for the product.

“We have to work to make money to stay in business,” he said. “But we all love what we do.”

The company survived through the pandemic at a time when many production companies had to stop shooting to maintain social distancing and quarantining regulations. Waymack had shot many advertising campaigns for tourism in Florida, Kentucky, Illinois and Arkansas. Those spots came to a grinding halt. 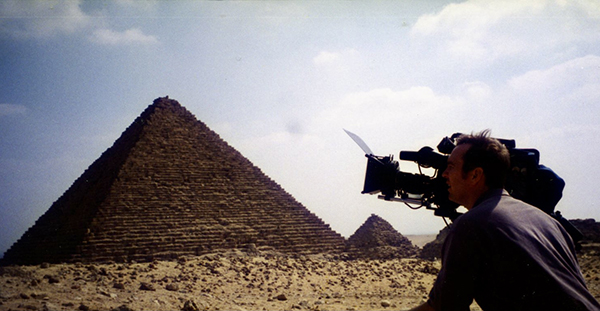 He made due by shooting spots for Kingsford Charcoal in the backyard of his house. He hired cooks to barbecue food for his video, and workers basically held a picnic.

“We ate a lot,” Johnson said. “We didn’t eat barbecue for three months after.” 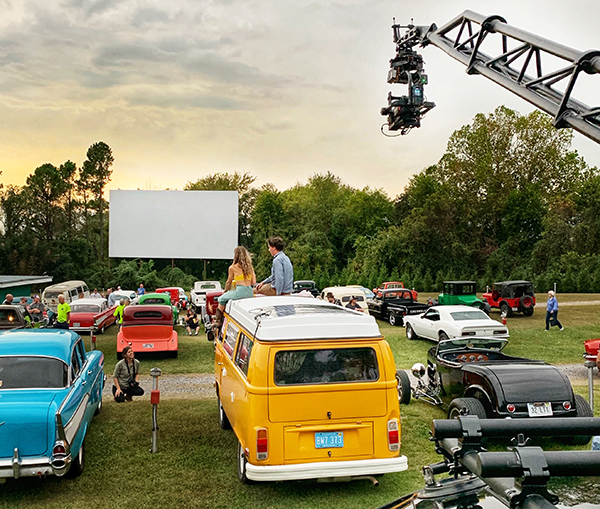 One of the more popular campaigns in Arkansas is “This is Winning” for the Arkansas Scholarship Lottery. In the advertisements, a man is featured traveling the state in a large green van with the lottery logo on it. He visits towns and talks with real lottery winners in flashy, fast-paced spots.

The campaign won a Gold Addy Award, the equivalent of an Oscar award for filmmakers, in 2019.

Waymack and Crew won several Addy awards for its “The Heist” advertisement which depicts what appears to be a group of mastermind criminals plotting to buy Arkansas lottery tickets. A man in sunglasses describes entering a convenience store, paying the clerk for a ticket, and says “boom” while dramatically opening his hand like an explosion. 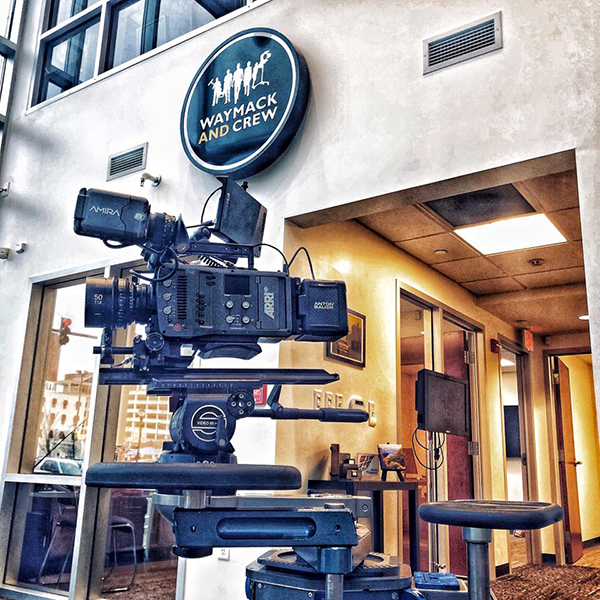 ARRI camera outside the Waymack offices in downtown Little Rock.

“With a little luck, we walk out with a million dollars,” he says. “Easy breezy.”

A brand-tracking survey of the advertisements indicated 42 percent of those who saw the spots said they would buy a lottery ticket, said Ashley McNatt, the marketing and advertising director for the Arkansas Scholarship Lottery.

“The ads have been a big lift for us,” she said. “They have had a great impact. We wanted to feature real Arkansans who won. They had a good idea of what we wanted.” 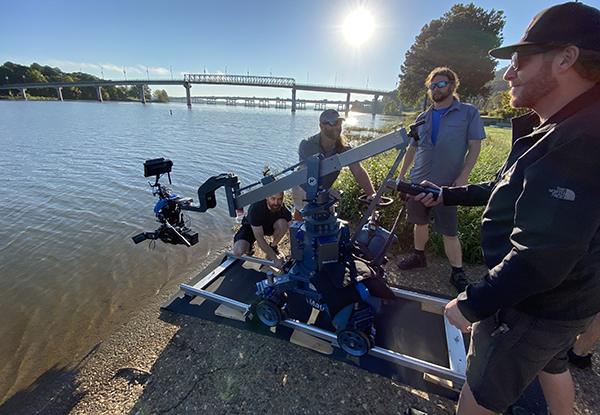 Waymack and Crew on the Little Maumelle River.

Waymack and Crew is now shooting a new series of advertisements for the Arkansas Scholarship Lottery’s scratch-off tickets that will begin airing in April.

The company won another five Silver Addy awards in 2019 for sound and video editing for its lottery advertisements and for spots featuring Arkansas tourism.

The company also has shot material for Southland Casino Racing in West Memphis.

In one of the 30-second spots, “Neighbors,” two attractive blonde twins knock on a resident’s door. A woman answers the door, and as the twins introduce themselves as neighbors, the woman’s husband speeds in and starts to tell her something. He sees the neighbors and, through quick edits, is shown celebrating by doing high-fives, swinging his shirt over his head, whooping, shooting photographs of the women and trying to do one-armed pushups before falling.

The scene cuts to the West Memphis casino as a narrator says, “Spontaneous celebrations aren’t always welcome in the rest of the world, but they are here.”

Waymack said his crew laughed constantly while filming the advertisement because the man portraying the husband, an actor from Chicago, ad-libbed much of the celebration scenes.

“We busted so many takes because we were so tickled,” he said. 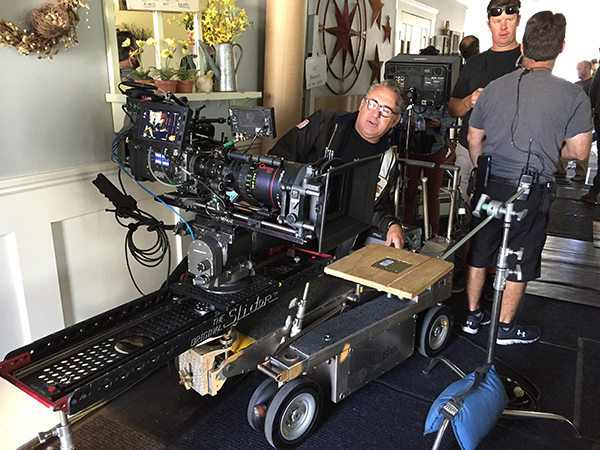 Shooting a spot for Frontier Cellular.

They also ran into some difficulties, he added. It was hard to find twins who had the needed, well, assets for the ad and who both could act.

Instead, Waymack said, he filmed one person playing both parts and then edited it together to give the appearance of twins.

The crew is hoping to resume shooting ads for tourism in Florida, preferring the warmer climate to the brutal cold of Chicago. Once, Waymack said, he was producing a spot for the Chicago Blackhawks hockey team. After filming a game at the United Center west of downtown Chicago one winter evening, Waymack stepped outside. The temperature read minus-27 degrees. 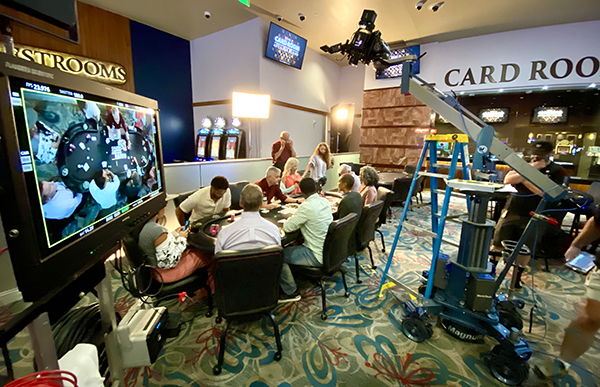 Like many creative types, Waymack always judges his own work with a very critical eye, seeing things he thinks should have been done after a project is finished.

“He doesn’t do paralysis by analysis,” George said. “He looks at it and learns what he wants to do next. He comes up with ways to make good things better.”

Waymack said his team will shoot more casino and lottery spots in Arkansas and is set to do more national advertisements.