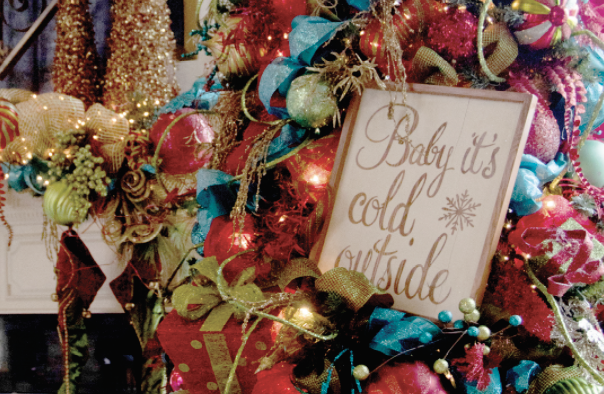 By Caleb Talley | Photography by David Yerby
With Thanksgiving in the rearview mirror, it’s now safe to deck the halls with holiday cheer. And while some Grinches would have us believe the garland can’t be hung until the turkey is eaten, there are plenty of Arkansans who have been basking in the glow of their Christmas lights for weeks. 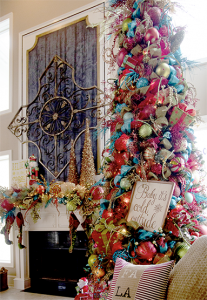 Decorating early conjures up feelings of childhood holiday memories and helps you relive those pleasant experiences.

According to a new study from the Journal of Environmental Psychology, those people are happier for it. The study found that decorating early conjures up feelings of childhood holiday memories and helps you relive those pleasant experiences. The study also found that people who decorate outside their home are friendlier than those who don’t.
That means the Bakers – AY Publisher Heather and her husband, Joel – are among the happiest and friendliest folks in Roland. Thanks to the help of their friends at Curly Willow, they’ve had their Christmas decorations up since October.
The Bakers’ home in the Waterview Estates of Roland was the last house built by Randy Ferguson, father of Little Rock developer Rick Ferguson. Its eclectic style and open floor plan make for a traditional feel, despite some contemporary elements. Even before the Christmas decorations were hung in every corner, the home oozed an inviting warmth.
The living room is especially welcoming, due in large part to a facelift by interior designer Larry West, Jr., who spent much of the summer adding flair to the Baker household. Artwork from Little Rock artist Buddy Whitlock hangs throughout the home.
And that’s the canvas with which interior decorator and florist Monica Griffin, of Curly Willow, was given to work her magic. Monica and husband, Josh, have been turning blank slates into Christmas masterpieces for years, and the Bakers are one of their most loyal customers.
The Griffins began their business a few years back, after driving through their hometown of Cabot and realizing the absence of a florist and interior decorator. “It was on a whim,” Josh says. 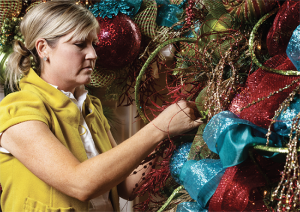 Monica works her magic on the massive Christmas tree in the Baker home.

“I always wanted to decorate homes,” Monica says, as she sorts through the mesh ribbon that encompasses the Bakers’ massive Christmas tree. “I didn’t have a degree or professional training. I didn’t want to put myself out there as a decorator not having any of the letters behind my name. But when we opened our store, we wanted to be different than most florists. We wanted to do more home décor. And that’s what we did.”
Josh’s mom was an avid Christmas decorator and spent the holiday season hand-making crafts and ornaments. When he and Monica began dating at the tender age of 16, they began to do much of the same. They opened their business a few years back, and with the exposure afforded them by a chance appearance at the Junior League of Little Rock’s Holiday House, it took off. “People started asking if we decorated for Christmas. We didn’t realize how many people wanted that. It snowballed from there,” Josh says.
A Curly Willow-decorated home is less traditional and more magical. Monica starts with conventional elements like garland and typical Christmas tree materials and showers them with bold, colorful elements such as large ornaments, snowflakes and mesh.
“It’s very whimsical,” Heather says. “Everything they do is grand, big and colorful.”
When asked where her inspiration comes from, Monica replies, “That’s hard to answer. It’s up here,” pointing toward her head. “We’re always looking for something new, trying to do something different with stuff people already have. That’s what we did with Heather’s tree.”
The Bakers’ tree, the centerpiece of their living room, stands at least 15 feet high. Every inch is covered in mesh, oversized ornaments and twinkling bulbs. More than 30 strands of Christmas lights were used to illuminate the massive tree from top to bottom. And the tree topper? Another tree. 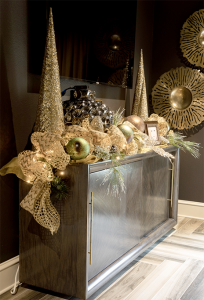 “A lot of people like the traditional look, but Monica carries it over into the whimsical,” Josh says.
“I mix it. You can make natural big, too,” Monica adds.
“We jokingly say that a Christmas tree is nothing but a decoration holder,” Josh says. “If you go look outside, and find a beautiful tree, it might be relatively symmetrical. But it’s not going to be perfect. Every limb is going to be different. It’s not uniform, but it feels right.”
The mantle, too, is covered in mesh and large ornaments, with a light dusting of traditional garland.
“We mesh a lot of our decorations first,” Josh says of the colorful material that makes up much of Monica’s décor. “That helps hold stuff in its place. That’s what helps her make it grand. If it were just garland, it’d be real flat.”
Monica adds, “It makes it fuller. That’s how we like to do it. We did incorporate some natural elements, with a little bit of pine. But if you put too much pine, it covers up your color.”
There’s even a verb for what Monica has done inside the Bakers’ house. “They tell Monica to go full Curly Willow on their home,” Josh says with a grin.
“I turn her loose and let her do whatever she wants to do,” Heather says. “She knows I like color.”
Monica likes to work within a budget when decorating for homeowners like Heather, as she says, “It can get wild.” She, too, incorporates as much of the homeowners’ decorations as possible. In the Baker household, that includes a Nativity set passed down to Heather by her grandmother. 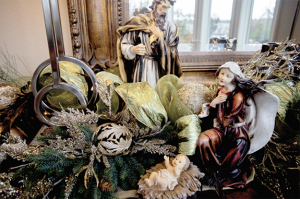 The Nativity set passed down to Heather by her grandmother.

“This is an important part of our Christmas decorations,” Heather says of the set, which sits inside their dining room. “It’s a precious keepsake to me because it was something I would always see in my grandmother’s home during Christmas. And it’s so nice to be able to incorporate that into our Christmas now, too.”
Heather’s home is just one of many that the Griffins will turn into a holiday wonderland. Last year, the couple decorated more than 200 trees. “We can’t even count it anymore,” Josh says, adding that they once kept count of trees, stairways and front doors.
“There’s something about Christmas,” says Monica, as she puts the finishing touch on Heather’s mantle. “It’s like when a child wakes up on Christmas morning, that’s how I feel when I finish a home. The first home we did this year, they were so happy to have us there. I get so excited. 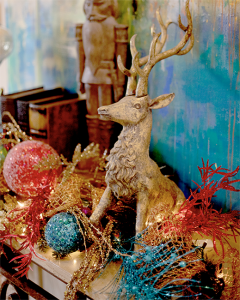 “There’s something about Christmas. It’s like when a child wakes up on Christmas morning, that’s how I feel when I finish a home. I get so excited.”

“I hear people ask, ‘Why are y’all putting Christmas out, it’s not even Thanksgiving?’ Well, shouldn’t we be celebrating Jesus’ birth all year? Why not make it the biggest thing you do? I know he was born in a manger, but there’s no reason we can’t go all out. I just love all of it.”
Josh adds, “Time flies by. Enjoy it.”
RELATED: A Lot Like Christmas!