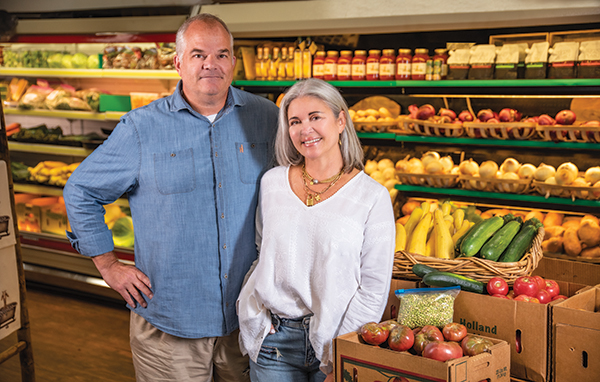 Heights Corner Market Does It All

Farm to table is a buzz phrase that often gets tossed around in boast. Many live up to the moniker, especially in a Natural State such as ours where the farms and markets and roadside stands are nearly as ample as banks and gas stations. But the folks at Heights Corner Market in Little Rock have unleashed a new spin on the old trope: farm to grocery to restaurant. It’s fairly unique in execution, involves a tad more logistical leaps, but, then again, unconventional was always sort of the name of the game for owners Lou Anne and Eric Herget.

The husband-and-wife duo took over the Kavanaugh Boulevard location four years ago, formerly occupied by Terry’s Finer Foods, a historic staple with big shoes — or pots — to fill. To make things even more arduous for the Hergets, neither of them had much experience in the fresh produce industry; Eric is a longtime veteran of the insurance sector, and Lou Anne a keen-eyed interior designer. 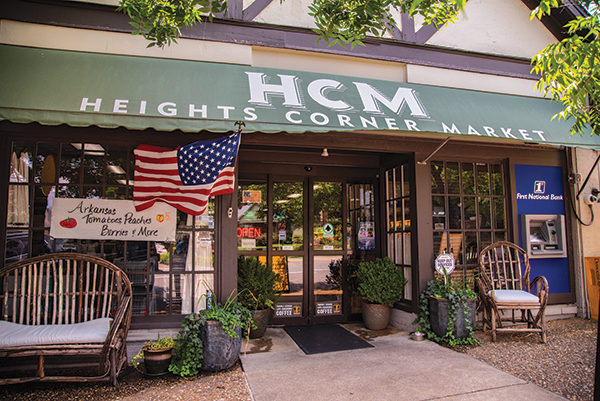 “We had no experience in grocery or restaurant, and my guess is there were probably some side bets out there that we wouldn’t make it three months,” Eric says with a laugh.

Simply taking over the storefront and doing their best to do right by the staff and patrons, many of whom had either been shopping or had worked at Terry’s for decades, was one thing. Once that part of the promise was fulfilled, the Hergets found more ways to make it theirs, rather than just what had come before. Sure, a mission to serve an assortment of locally sourced products is paramount — be it the okra and tomatoes or the steaks and deli meat. But, what if as much of that product was grown in house as it is outsourced? About a year ago now, Eric says they purchased some land in Heber Springs to start a farm. Again in their unconventional ways, neither of the pair was an expert farmer coming in, but they embraced the challenge for the betterment of the beloved market.

“We’re in our first year of growing produce for the store,” Eric says. “We still continue to use our traditional partners that we’ve always bought Arkansas product from, so we’re not trying to cut them out by any means. It’s just, we’re trying to supplement what they have.”

Between their own farm and their local partners, the shopping side of Heights Corner Market has a bountiful selection of summertime favorites, such as strawberries, peaches, cantaloupe, okra, squash, tomatoes and watermelon. Then there are the lady peas, which he doesn’t believe anyone else has as readily available as they do.

“We want fresh produce in the store that we’ve grown, but we still want to use the folks we’ve used for years and who have supported that store for so long,” he says.

One would be a fool to not make note of the other thing that keeps the people coming back for more: Walter’s Green Room, the Hergets’ on-site eatery, where the “to restaurant” part of the mission comes to fruition.

The executive chefs, David and Angel, do theirshopping for menu items right there in the grocery part of the business. They work hand-in-hand with the store manager, Nathan Horn, as well as Lou Anne. This is one of the Herget duo’s proudest accomplishments, providing a place that is fluid to the needs of the customer — where you can come to shop for home or sit down for lunch or dinner. Either way, the food’s all coming from the same place.

For those with budding residential green thumbs who are inspired to go “farm to table” from home, Eric is happy to provide some tips and tricks for all to generate fresh produce in no time. Ironically, that begins with him suggesting an alternative route to the one he took.

“Don’t get visions of a giant farm like I did,” Eric jokes. “Maybe start a little smaller and kind of take a couple of years or a year to learn what it takes.”

And while we are in the waning hours of summer, it’s not too late to build up a few experimental blooms here and there. He says that many of the aforementioned products they have in stock, such as watermelons and strawberries, can all still provide plenty of buds. As far as rudimentary beginnings go, Eric suggests tomatoes, squash and okra, first and foremost, as some of the easiest to grow for the backyard gardener.

“If you’re going to try the organic route, you have to pay attention to what the bugs are doing,” Eric advises. “What are you going to do when you get the squash bug? It may mean you’re out there physically squishing bugs to get them off the plants. If you’re going to go organic, for sure start simple.” 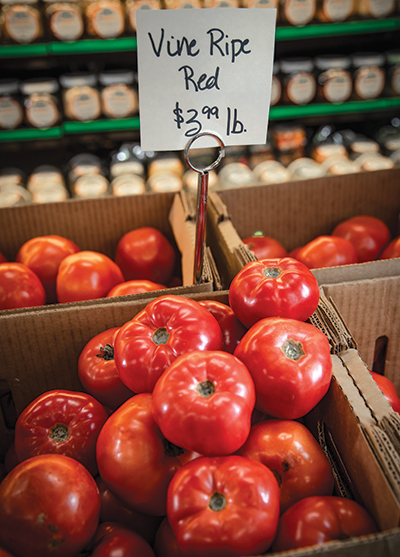 But if you’d rather just play it safe and peruse the already-picked miscellany at Heights Corner Market, the Hergets will certainly oblige a basket of vegetables and fruit or a plate of pork chops and pasta (two of Eric’s favorite dishes on the menu) any time — during business hours, of course.

As for the secret fertilizer to such a worthwhile and profitable endeavor, well, that’s pretty simple in their eyes, too.