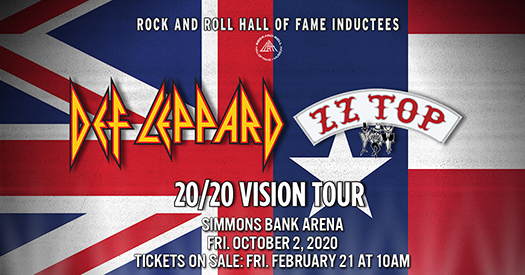 Def Leppard will be “Bringin’ On the Heartbreak” in Arkansas later this year.

The band that made pouring sugar on people a thing will be performing at Simmons Bank Arena on Friday, October 2, at 7 p.m. Even better – they’re bringing some special friends with them. ZZ Top will be touring with the band – they will indeed by some “Sharp Dressed Men.”

Starting in Fall 2020, Def Leppard is kicking off its “20/20 Vision” tour, which will hit 16 cities in the United States. Starting in Albany, New York, the tour will make its way south before heading west and ending in Spokane, Wash. The tour starts Sept. 21 and ends Oct. 18.

Def Leppard was inducted into the Rock and Roll Hall of Fame in 2019 and has garnered 2.5 billion music streams in only one year.

Tickets can be purchased at the Simmons Bank Arena box office or here.