Delivering on a Promise: Feed & Folly 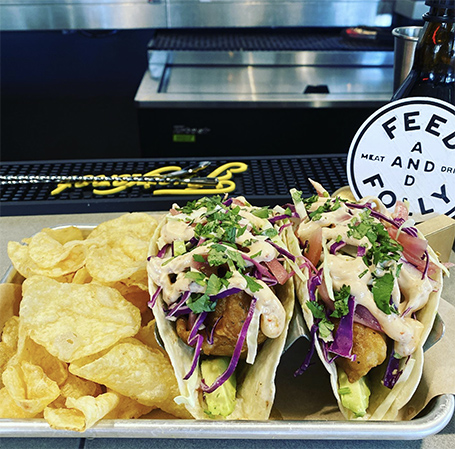 For the last five years, English brothers Mickey and Matt Sutton and their best friend Fayetteville-native Lewis Chase have been working to make their dream owning their own gastropub a reality. And after a tireless effort, their dreams have come true, and Feed & Folly quietly opened to the public… in the middle of a global pandemic and massive economic crisis.

But they’re not going to let that get in the way of serving the city of Fayetteville some of the finest English-inspired dishes found anywhere. They’re just building anticipation for when the tough times have passed and their restaurant, Feed & Folly, can fill up with guests eager to try their smoked meats, drink their craft beer and enjoy the sunshine from their rooftop patio.

The Sutton brothers moved to Fayetteville when they were in their teens. Mickey and Lewis became friends in high school, and the three kept up with one another for all of their adult lives.

After high school, Mickey went into the restaurant industry in Austin. Matt did the same in Durango, Colorado, running a deli and curating food for a local brewery.

“I visited them,” says Lewis, “and they were doing all this amazing food. Curing and smoking meats. I was blown away. And that’s when the conversation started: ‘Hey, let’s do something together.’ It was time for them to own their own restaurant. That was five years ago.”

Matt and Mickey wanted to come home to Fayetteville. “That’s where we had spent the most of our time in the state,” says Mickey. “We immediately started looking for places four years ago, and we came across this building about two years ago. This has been a long time in the making.”

Feed & Folly’s name and menu has its roots in Southport, England, from which the Sutton brothers hail.

“The name really derives from my great-great-great grandfather,” said Mickey. “He founded our hometown of Southport, and he was known as the Mad Duke Sutton. He opened the first hotel and pub there. Technically his pub was called the Black Bull, but everyone referred to it as the ‘Duke’s Folly’ because you never knew what would be going on there.

“Rather than to have a full-on English pub, we wanted to add inspirations from places we’ve been; we wanted to Americanize it,” he adds. “Feed & Folly was what we came up with. Feed for our food, folly for the parties we hope to have here.”

The inside of the restaurant pay a special homage to the elder Sutton, with a neon light that spells out his favorite saying: “On the fiddle, or just fiddling.”

The folly is fun, but the feed is pretty important. And their dedication to it is certain to keep people coming through the door.

“We felt Fayetteville needed something like this, something cool with quality food,” says Matt. “The reason I started curing the meats is because it’s just the right thing to do. People pay attention to where their food is coming from. People don’t want food that comes from a bag. We’re going to do the right thing, go the extra mile, to make great food from scratch. I want to be able to tell you what’s going into your food, with no ingredients I can’t even pronounce.

“Your turkey shouldn’t look like a basketball,” he adds. “Ham doesn’t come in a log. I mean, c’mon.” 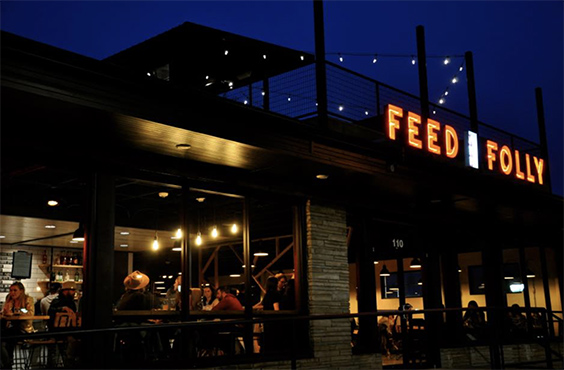 The guys’ years long search for the right spot led them to south Fayetteville, to a building that had sat vacant for the better part of 40 years. The spot sits right beside the old Washington County Courthouse, just before College Avenue gives way to Archibald Yell.

Being in the heart of downtown Fayetteville was especially important to Lewis, whose family has lived there for generations.

“My family used to own Lewis Brothers, which was a business on the square, and Lewis Ford, which a car dealership off the square back in the day,” he says. “And we just thought that the combination between my history here and their experience in the industry, this would be a great place to bring it together.”

“It’s that combination of his history and ours that our menu is a mix of Americanized English food, for the most part,” say Mickey. “We’re doing classic English stuff like bangers and mash, fish and chips. But we also spent a lot of time in Colorado, so we’ll have hatch green chilis. We spent time in Texas, so there will be some influences there like barbeque.

“The food is stuff we like, and we like to make, but it’s stuff we think the public is really going to like,” he adds. “There is some classic stuff, but there’s also stuff like the Banh mi that we feel we can cook well. We know a lot of people do a Philly cheese steak, but we think we can do a really good Philly. So, it’s on the menu. It’s going to be the best; we slice the meat here in house. We’re doing things that we think will be above and beyond.”

“Our pastrami is something to be proud of; it takes so long to make,” says Mickey. “We brine that for three days, smoke it. Our fish and chips is a big one. I’d put my Philly cheesesteak up again anyone’s. The Cuban is really good because of our own ham and pulled pork.”

And don’t forget the local craft beer. The restaurant features 20 taps in the downstairs dining room, and 10 upstairs on the patio, a space that is the pride of Feed & Folly.

“When we did get this building, we were concerned that there was no patio space,” says Matt. “And we’re landlocked. There was nowhere else to go but up. The first time we walked through the building, we happened to climb up on the roof. The view was incredible. We thought, if we can get this done, this would be incredible.” 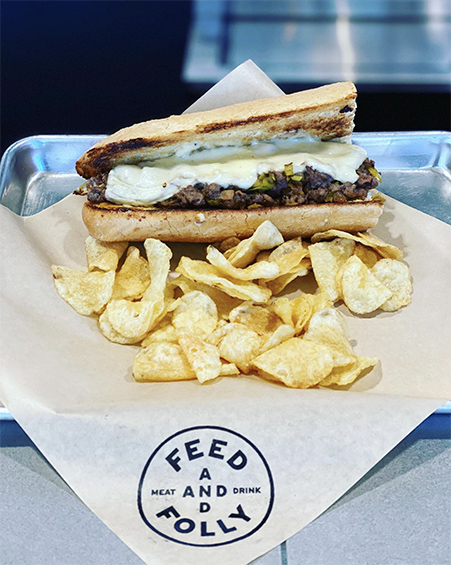 And they did get it done.

“Pictures don’t do the roof justice,” says Mickey. “You can see so much of Fayetteville from there. It has a completely different feel. You may come and only hang out on the roof and not come downstairs to dine. It even has its own limited menu.”

When order is restored to the world, Feed & Folly will be Fayetteville’s new favorite brunch spot, too, with a special brunch menu available from 9 a.m. to 2 p.m. They also offer a Sunday night roast which will change each week.

Opening in the middle of a global crisis has been tough, the guys will admit. But they’re making the most of the situation by providing take out and connecting with their local community has best they can. They chose to be in south Fayetteville for a reason, and they’re eager to serve the people of south Fayetteville.

“We want to be connected to this community,” says Lewis. “South Fayetteville is a close-knit community, and it’s growing. We want to be a part of that. We want to do right by everybody. We’ve put so much into our food, so much into this building. We really care about what our customers think, and that can be rare sometimes. We could have gone north and built a new restaurant with a great big parking lot, but that’s not what we wanted to do.

“It’s simple,” he adds.” We want to bring good food and great atmosphere to the people of this town we love.”

“We’re Fayetteville people,” Mickey says. “We wanted to do something special right here.”

Though the restaurant is closed to diners, Feed & Folly is taking take-out orders over the phone. Check out there menu here.