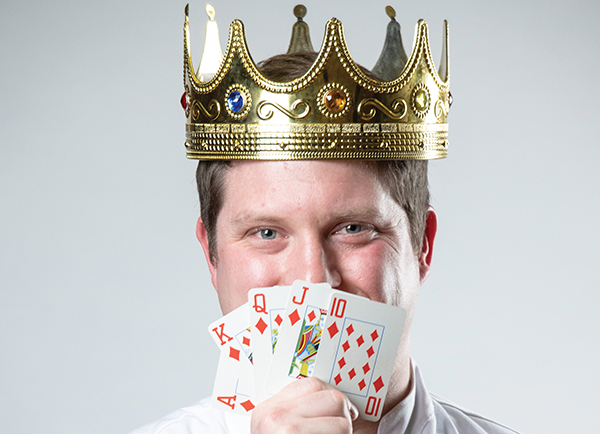 Some of the Natural State’s top chefs will go head-to-head in the Diamond Chef competition on Thursday, April 22. Local influencers including lifestyle guru Jennifer Maune and private chef Chad Mackey will host the pre-event watch party beginning at 5:30 p.m., and the live showdown will begin at 6 p.m. Sponsors and ticket holders will get a link to watch the live event, making this event far more exciting than the typical virtual events that we’ve grown accustomed to over the last year.

This is the 13th year for the Diamond Chef Arkansas competition. Despite postponements, delays and cancellations due to the COVID-19 pandemic, it is important that the tradition continues, says Adora Curry, advancement marketing and alumni relations manager at the University of Arkansas-Pulaski Technical College Foundation. Curry is helping with coordinating and overseeing the Diamond Chef event.

“It was important for the show to go on because it is something all of Arkansas looks forward to,” Curry says.

Diamond Chef is the brainchild of founders: Chef Todd Gold, director of food and beverage at Saracen Casino Resort and advisory board chairmen for the UA-Pulaski Tech Culinary Arts and Hospitality Management Institute; and Tim Higgins of the Fort Smith Boys & Girls Clubs.

The virtual setting has allowed for more opportunities related to the event, including a silent auction that starts several days beforehand.

“We didn’t want to plan an in-person event with barriers like limiting the number of guests or minimizing the interactive experiences our supporters have come to love like food and drink tastings, the silent auction and educational presentations by local businesses and the Arkansas Hospitality Association,” Curry says. “This is a great way to not only support the college but also thank them for their service and sacrifice. By now, everyone has been impacted in some way by this pandemic. For many of our students, that impact has been traumatic because of their line of work, but they brave it every day because they are committed to their fields. That’s incredibly honorable.”

Proceeds from the Diamond Chef competition benefit students at UA-PTC, including those training to be frontline workers in the battle against COVID-19 and those who work in the hard-hit restaurant and hospitality industry.

For more information or to purchase tickets, visit uaptc.edu/diamondchef.

Here is a closer look at the competing chefs this year. 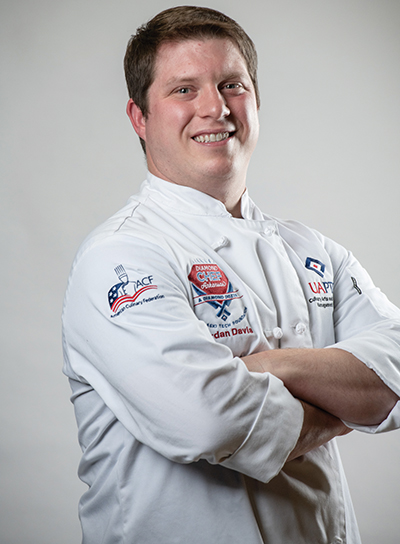 Reigning Diamond Chef Jordan Davis of Chenal Country Club will be defending his title at the event. A graduate of the UA-PTC Culinary Arts Program, Davis’ love for cooking began in high school.

“I would come home from soccer/football practice and watch Emeril Live every single day,” Davis says. “My junior year of high school, I tore all of the ligaments in my ankle and had to have surgery in order to repair them. Instead of sitting on the couch for three months, I taught myself first how to grill, and my passion and love for cooking grew from there. I got a job at Chenal when I was 21 as a dishwasher, and in my 10 years there, I have worked my way up to executive chef.”

Davis mentions that many factors are needed to be a chef — a large amount of work, planning, people skills and attention. Davis’ winning strategy is simple: good, responsible flavors with sound technique. 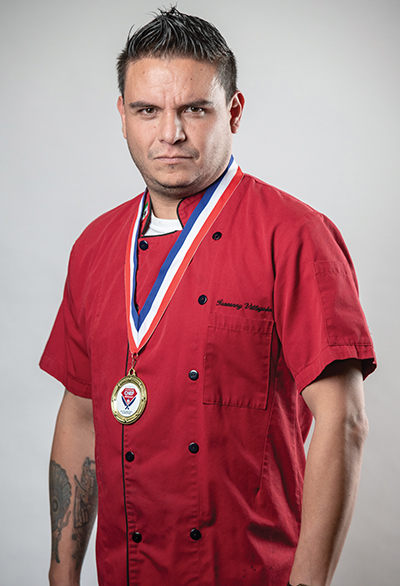 An accomplished chef from Mexico, Villagran has served as the chef for many prestigious restaurants and hotels in Central Arkansas. Villagran is currently in the process of opening his own establishment, Restaurant Bar Mar y Tierra Seafood & Grill. Villagran has a diverse supporting team with one member from Venezuela and a sous chef from Jordan. Villagran plans to create unique dishes that combine cultural, flavorful twists from all three countries to stun the judges this year. 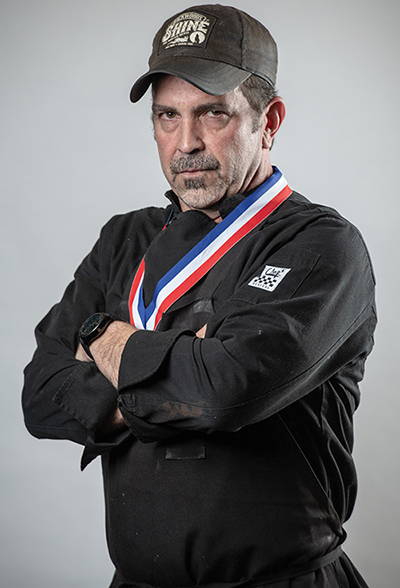 Bonner Cameron is the executive chef at Allsopp and Chapple. His passion for cooking began with fond memories of grilling and smoking meats with his father. Those memories inspired him to enroll in a culinary school, where he earned his degree at the Arts Institute of Houston. He immediately began to work with well-known chefs in Houston hotspots such as Zula, Masraff’s and Trevisio.

Cameron moved to Little Rock, where he began making a name for himself not only at YaYa’s Euro Bistro but the community as well. In 2013, Cameron decided to open an elite catering company along with his partner Crystal Dear called Bistro Catering, and now he serves at Allsopp and Chapple.

“Our vision is to create impeccable food of the highest quality,” Cameron says. “We want people to have a memorable experience that you cannot find anywhere else in Arkansas.” 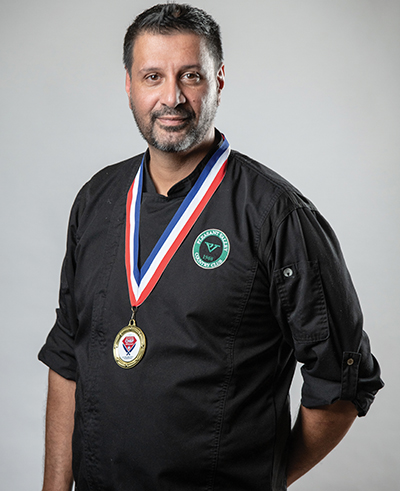 If given a choice among beer, bourbon or wine, Joseph Salgueiro of Pleasant Valley Country Club says he’d choose wine and tequila. Salgueiro brings a taste of the Big Apple to Little Rock; he learned the tools of the trade in New York City. He previously assisted executive chef Jean Christophe Michele at La Tour d’Argent in Paris, spent six years as a sous chef at the Four Seasons Restaurant in New York City and served as chef de cuisine at The Peabody in Little Rock and executive chef at 1620 Savoy.

The best cooking advice he’s ever received? “Cook from your heart; do not take shortcuts.” 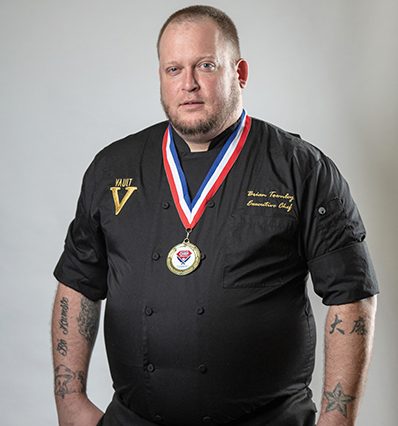 Chef Brian Townley is executive chef at the Vault at 723. Townley’s favorite dish to prepare is anything with fresh pasta, and his favorite cuisines to prepare are Asian, Italian and Hispanic in origin.

Townley, who has been cooking since the age of 8, cautions that cooking is not as easy as it looks. With 22 years of culinary industry experience under his belt, Townley has seen his fair share of competitions, but it wasn’t until recently that Townley worked up the confidence to join the Diamond Chef competition. Townley’s game-winning strategy is to “be myself, have fun and take chances,” he says. 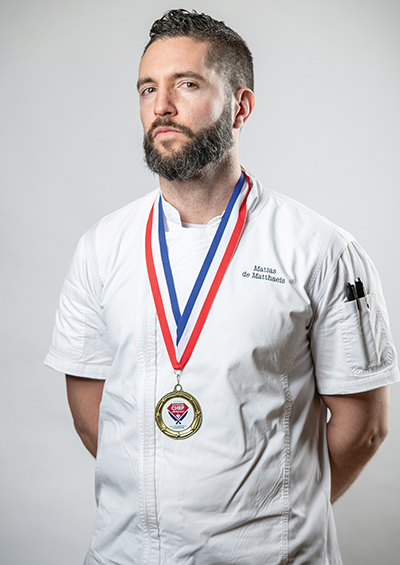 Chef Matias de Matthaeis, is executive sous chef at The Alotian Club. He has attended several culinary schools in Argentina and has trained with renowned chef Antonio Bachour.

“I started cooking when I was 15 because my mom didn’t have the time,” Matthaeis says. “I picked up my grandmother’s recipes and realized I enjoyed it a lot.”

Matthaeis loves focusing on one ingredient at a time but loves steak, empanadas and red wine. While Mediterranean cuisine comes more naturally to him, some of his other favorite cuisine styles include French and Italian. When asked about his game-winning strategy, Matthaeis says “I don’t have one. Winning has to do with the judges’ opinion and what other chefs make. That’s relative. I have a great sous chef with me — Joel Carr, who is actually my boss — and we will make something we are proud of with the time and ingredients given. That being said, I’m coming for you, chefs.”