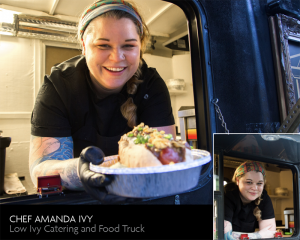 His fried chicken was really outrageous; it was pretty much the old-school flour and Crisco kind of way, you know? He made amazing biscuits, cornbread. And a lot of it was jams and canning and pickling, too.

Have you equaled anything of his?

I do the biscuits and the cornbread pretty well. I’ve played around with that a lot, taking recipes and thinning it out for a waffle or a pancake for an hors d’oeuvres.

What is Southern food to you?

I think the thing about Southern food is it’s simple food done well. Just that’s it, right there.

Hailing from Riverside, Calif., you’d have expected Chef Amanda Ivy to have been the agent provocateur in Little Rock’s food scene. But what you might not have anticipated was that her palette was the best-loved foods of the Southerner’s experience upon which she creates something new and fresh.

“Food is community,” she says. “Whether you cook well or not, or cook elaborately or simply, it’s something people can commune around and come together.”

Once Ivy landed in Little Rock, she enrolled in culinary school at UA-Pulaski Tech and also set about integrating herself into the food scene here. In her career, she’s worked in some of the most recognized eateries in town including The Southern Gourmasian, Heights Taco and Tamale Co., and Old Mill Bread Company. She’s also had a hand in menu items for The Fold and Raduno Brick Oven and Barroom. Most recently, she was executive chef at Sauce(d) before diving full time into Low Ivy.

Ivy may have come here from the left coast, but her roots run deep in southern soil. Her father, Bill Lowry, is a native of Clarksdale, Miss., and an accomplished amateur cook.

“Informally, I learned to cook from my father who probably would have been a chef had it been the thing to do back then,” Ivy says. “But he had a family and chefs don’t make crazy money.”

What Lowry did do was pass along a love of his native South to his daughter in the kitchen, thanks to a lifetime of experience and a stack of Southern Living cookbooks. Years later, upon moving to Arkansas, she tapped into those recipes for hosting Sunday dinners, returning to her roots.

“It’s something that made me feel very at home when I moved here,” she says. “I think food has the ability to do that for a lot of people.”