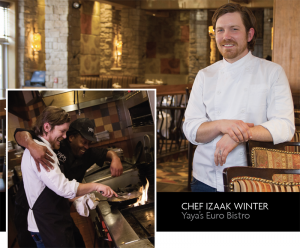 Do you have anything in the kitchen that borders on superstition?

I have to have my towels folded a certain way, and they have to be perfectly stacked. I don’t know why. Also, I have to have my container of spoons of various sizes for plating. Have to have a pan of plastic spoons for tasting a lot of stuff.

Biggest influence in your career?

A British chef I worked under, Martin Woods. He’s got that Gordon Ramsay-esque attitude about things. He ran a militant-style kitchen, and he was tough to work for. But I could take it because I grew up wrestling, and I wrestled in college, so I was used to being coached and pushed really hard. It translated really well to my training in the kitchen.

What do you do when you’re not in the kitchen?

My main thing outside of work is to get outdoors, hike around, look for mushrooms. Anything to get me outside, just totally removed, phone in the car. I’ll walk a couple of miles to a place where there’s nobody else around and just soak in the quiet.

If Chef Isaak Winter’s grandmother had had a better cable TV package, he might not be where he is today.

“I was maybe eight or nine, and I used to spend summers at Grandma and Grandpa’s house,” he says. “Food Network had just come out, and my grandma was obsessed with Emeril Lagasse. I didn’t care for him all that much; I thought he was kind of corny. But I loved Iron Chef; I was fascinated by it.”

Winter came home after a month of watching cooking shows and told his mother he’d found his calling.

“My mom, bless her heart, is not a great cook, but she helped foster my willingness to learn how to cook,” he says. “First thing she taught me how to make was biscuits and gravy, and that is where it started. Every Sunday, I made biscuits and gravy.”

That humble dish led to more elaborate recipes culled from his week’s Food Network viewing (“Some of those dinners weren’t very good,” he concedes) and his first job in the industry at age 15 as a fry cook at the local Dairy Queen. It wasn’t sophisticated fare, but it fed his ambition to cook for a living.

While completing his culinary training at the Kansas City Art Institute, he landed a gig a Yaya’s there and the restaurant has been integral to his career ever since. He came to Little Rock’s location as Executive Chef in 2016.