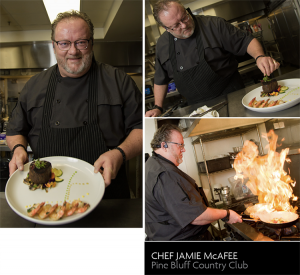 A sharp knife. I think the absolute best knife that I go to every day is a carbon, non-stainless steel. They have the same look as the old-timey ones, you know? But they will hold an edge longer than any steel out there.”

We mark them on a grill to rare and then we put 35 to a sheet pan and put each one of those pans in the oven depending on how you want it cooked, medium rare to medium. Just years of experience makes them all come out exactly.

What are you most proud of?

I’m most proud of my very stern work ethic. You have 80- to 90-hour weeks. There are days it’s going to be tough where it’s 125 degrees in the kitchen in June, July and August. After a rain, it’s 100 percent humidity. Sometimes you have a lot more unglorified days than you do glorified.

After spending more than two-thirds of his life in the business of cooking for others, it’s tempting to say Chef Jamie McAfee has learned the secret to longevity. But the plain truth is, he brought that with him on his very first day in the business.

“When I teach school at Pulaski Tech part-time, I tell students about my first job in Memphis,” he says. “I interviewed after school five times, and the guy there wouldn’t give me a job. Finally, I said, ‘Would you let me work for free?’ and for a year I worked for nothing.

“If you don’t have enough passion to work for nothing, then you might not have the passion it takes to have the longevity of 42 years.”

Born in Little Rock and raised in McGehee, McAfee earned his first culinary degree from the now-defunct Memphis Culinary Institute. For good measure, he earned a second from UA-Pulaski Tech. The rest he learned through experience and the school of hard knocks.

His resume is short – his last 34 years have been split between just two locations, Delta Country Club in McGehee and Pine Bluff Country Club – but extremely well-informed.

“My father, James McAfee, was a country club chef. I grew up basically cutting my teeth in his kitchen,” he says. “I’ve worked under and had a tutelage with the great Paul Prudhomme, and I worked a lot with Sam Choy, the great Hawaiian chef.

“I really enjoy the á la carte business, but I would say that I am very strong at banquet cooking for 300 to 600 people. That’s what I tend to enjoy the most.”

Made in Arkansas: Wicked Mix and Wicked Minis
November 27, 2020