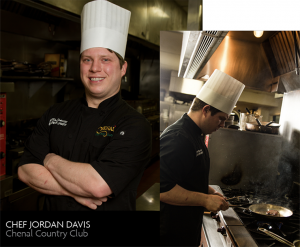 If you were cooking your last meal, what would be on the plate?

What was your eye-opening moment as a young chef?

It’s just all the little things. You don’t realize you need to order salt and butter and put on all these extraordinary events as well as the á la carte line. All the little things that go into one plate to make it really, really special.

Do you have a saying or tagline you’re known for?

Probably just, ‘Push yourself.’ Gotta get that sense of urgency.

“I don’t have any faith in you yet. But I will. Because you work really, really hard.”

So goes the most memorable line Chef Jordan Davis’ mentor ever gave him. Today he wears it, like his work ethic, as a badge of honor.

“I was scooping ice cream Thanksgiving morning when he said that to me,” Davis remembers fondly. “I do work very hard. Blue collar. I try not to stay in the office; I like being on the line. I like getting my hands dirty.”

Such qualities seem ill at ease in the highly-refined environment of Chenal Country Club, but don’t let the stately fireplace and sumptuous leather seating fool you. Meeting the discriminating tastes of one of the more exclusive clubs in Arkansas has a pressure all its own.

Regularly expecting the unexpected has honed Davis and his crew to new levels of creativity – proper training for the Diamond Chef event. At one club function, the team looked for ways to reimagine spaghetti and meatballs.

“We really try to push the envelope,” Davis says. “We did lobster spaghetti and meatballs. We ground up the lobster and used it in meatballs. Then, instead of using eggs in the pasta dough, we used lobster roe. Green noodles, blanched them to orange, tossed them with a little bit of saffron and cream.

“That is the kind of fun stuff we get to play with. We’re about creating experiences for our members.”