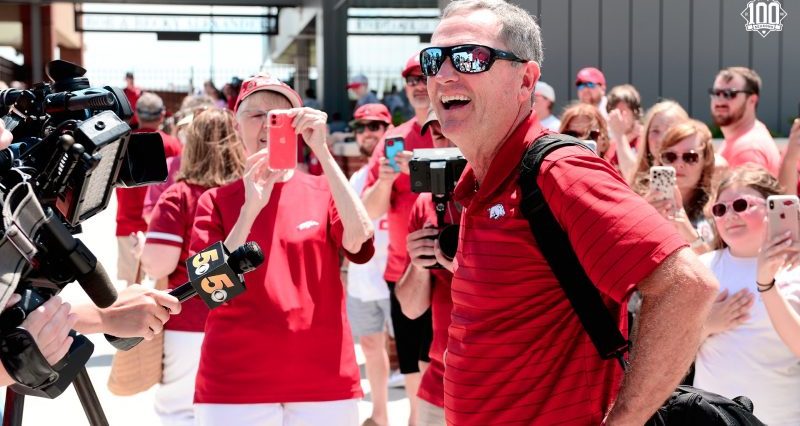 OmahaHogs, Diamond Hogs, the Razorbacks of baseball. Whatever you’d like to call them, fans of Fayetteville collegiate sports are ecstatic to see their boys traveling to Omaha for the College World Series of Baseball. This will only be the 11th time in school history that the Hogs have made it to the College World Series with their last visit being back in 2019.

Still the Hogs have been on a wild streak of wins and have remained remarkably consistent late in the season. Despite their consistency the NCAA Rating Percentage Index (RPI) shows that the Hogs might be a long shot to win being ranked at the bottom among the 8 teams who will be playing in Omaha this weekend. RPI isn’t everything though and for those who are betting on the game, the Hogs have pretty good odds at least according to Vegas who has them at a 9/2 chance to win. While those odds might change between now and Saturday one thing is for certain, they have become a fan favorite even for college baseball fans who don’t live here in the Natural State.

The series kicks off Friday with No. 5 Texas A&M playing Oklahoma and No. 9 Texas playing Notre Dame. Arkansas will play Stanford Saturday at 1 pm (CST) with all of the NCAA College World Series games being available on ESPN. No. 14 Auburn will play Ole Miss later that evening at 7 pm on ESPN2.

Our friends from 103.7 the BUZZ are already in Omaha with the Hogs, but who else is going to be there? I know that there are plenty of us here at AY who would love to be there for the game on Saturday, either way I’m sure there are going to be plenty of places to enjoy the game with fellow Diamond Hog fans.