Childhood Friday night catfish dinners are now provided daily for those in search of a meal cooked from the heart.

[dropcap]At[/dropcap] the age of 14, as Travis Hester was enjoying catfish with his Maw Maw’s tarter sauce, he said to his mom, “We’ve got to figure out a way to do something with this sauce.”

He laughs when asked about a 14-year-old’s desire to monetize grandma’s cooking. “I come from an entrepreneurial family, and a line of great Southern cooks, and her sauce is wicked good, so thinking that way comes naturally.” In spite of his question to mom, Hester admits he never imagined having a catfish restaurant.

Hester is a good-looking Southern boy with good Southern manners. His friendly greeting is matched with his lazer awareness of his workers’ movement around him as they prep for the impending lunch rush at his third Eat My Catfish. The second is in Conway, the original in Benton.

Generations of Arkansas women know the new location as that of the state’s predecessor to Victoria’s Secret, Barbara Graves Intimate Fashions in Breckenridge Village off Interstate 430.

All hands on deck for lunchtime rush.

Respectful of this history, Hester has paid homage to it. “Our order counter was the counter in Barbara Graves’ store,” he says pointing to its original spot. We repositioned it, refinished the sides and topped it with a concrete poured top.” He notes that Graves and her family have already dined there a couple of times and was pleased to see the nod to her legacy of forty years in business. The door is original to the shop.

It’s 10:45, Thursday morning of his second week.  Workers are quietly but quickly prepping for the lunch crowd that will soon weave out the door in wait of catfish and shrimp served with his grandma’s tarter sauce and cole slaw recipe. Hester gives a tour of the renovation. As one who shopped at Barbara Graves, the design of Eat My Catfish gives no hint of its prior role as a retail shop. Reclaimed lumber from a barn on his father’s, Steve Hester, property was used throughout. The restaurant is a true labor of love. “My dad and I built all 35 tables, seats and cushions for three months.”  They also did most of the additional work inside. 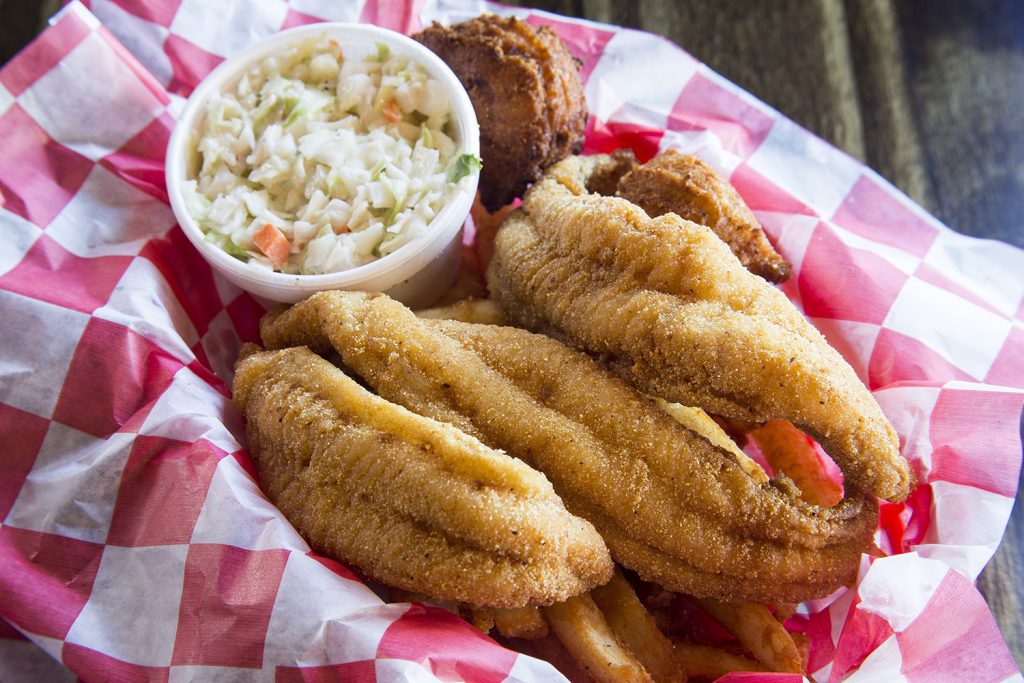 The catfish is served with Hester’s grandma’s tarter sauce and cole slaw recipe. 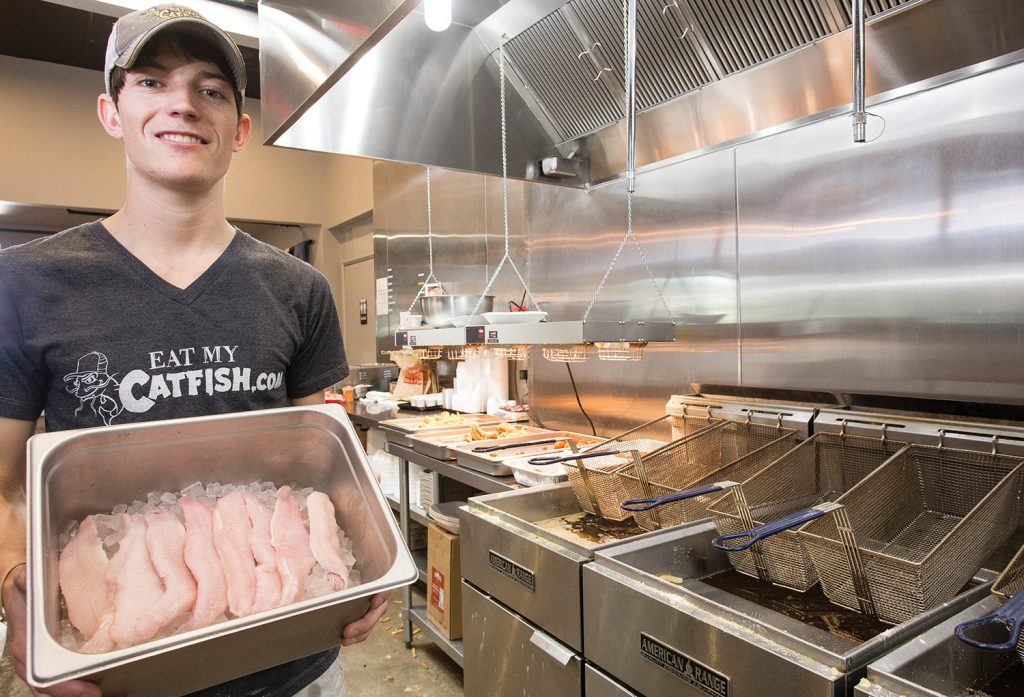 Near a wall of family pictures depicting their love of fishing and shrimping is a freestanding sink. “When you’re eating crab legs and peeling shrimp the hands need to be washed often. You can do it here, instead of having to run to the bathroom.”

When asked what distinguishes his catfish from others, Hester’s mood is serious. “There’s no antibiotics, no hormones; it’s USA premium catfish, flavor tested resulting in sixty percent of it rejected before it gets to us.” Because of Eat My Catfish’s volume, Hester has catfish delivered three times weekly on ice, never frozen.

What makes his catfish good? “You want your catfish to taste like it did when you were a kid,” Hester explains. To the point, he cooks the fish to be “crispy on the ends, tender in the middle.” If customers want theirs crispy from end to end, just ask. 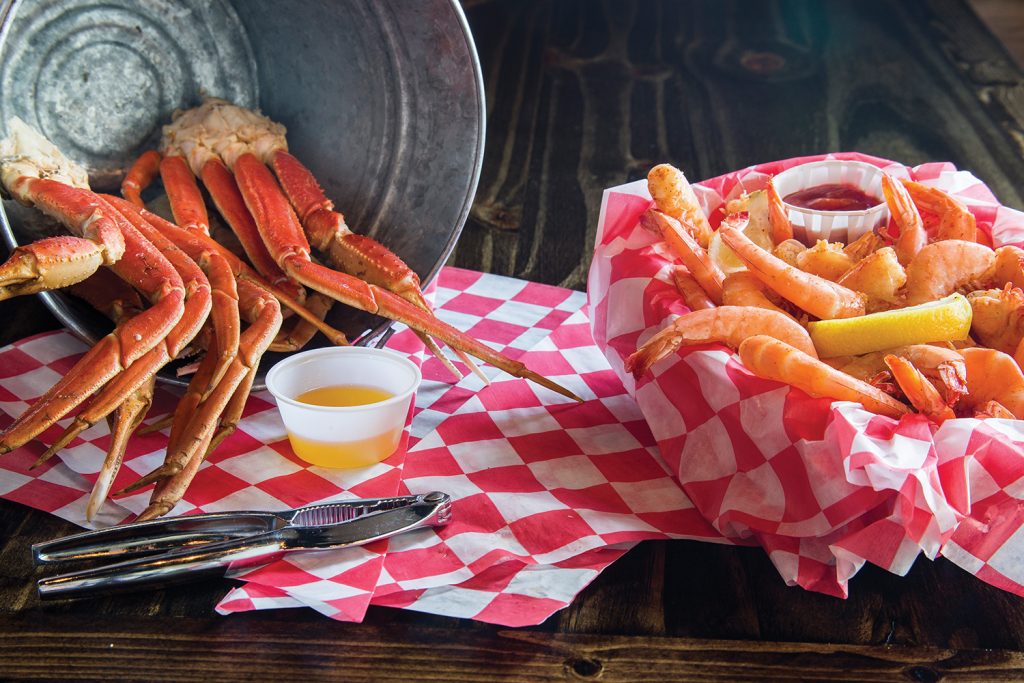 Crab legs and shrimp are always on the menu with catfish. 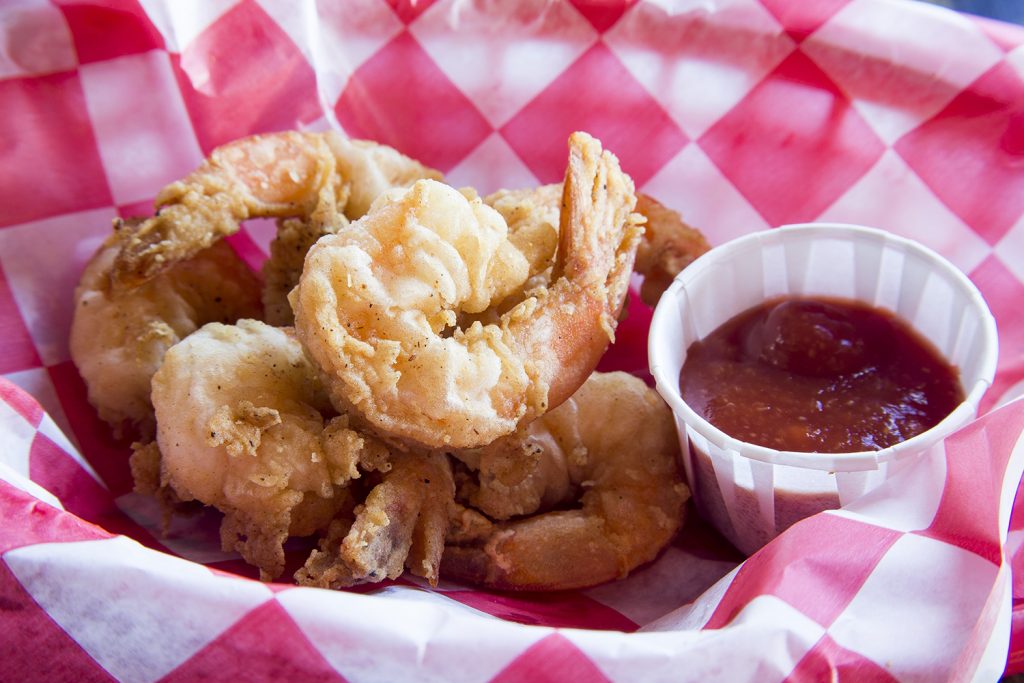 “What our customers want is consistency,” according to Hester. “Our customers in Benton have been with us eight years. They know, no matter how long the line is, they can rely on quick service, and the two to three times they come in each week, their catfish, cole slaw and sweet tea will be consistent in taste. Quick service for Hester is from placing your order to your last napkin wipe thirty minutes. “Of course you can dine at your leisure, but for our lunch crowd that’s important.”

Good food is a constant in Hester’s life for as long as he can remember. “As an adult, I realize I took good cooking for granted as a child. Every day when I got off the school bus, Maw Maw was taking cookies out of the oven for us. There were fresh baked pies, vegetables came from the garden by the house.”

Hester said he’d eat at friends who’d have peanut butter and jelly for meals. “Mom cooked dinner every day. Always something ‘green’, a bean, a meat and a salad.” Friday night for the Hesters meant catfish. “Every Friday it was catfish, French fries and cole slaw with her special tarter sauce.” 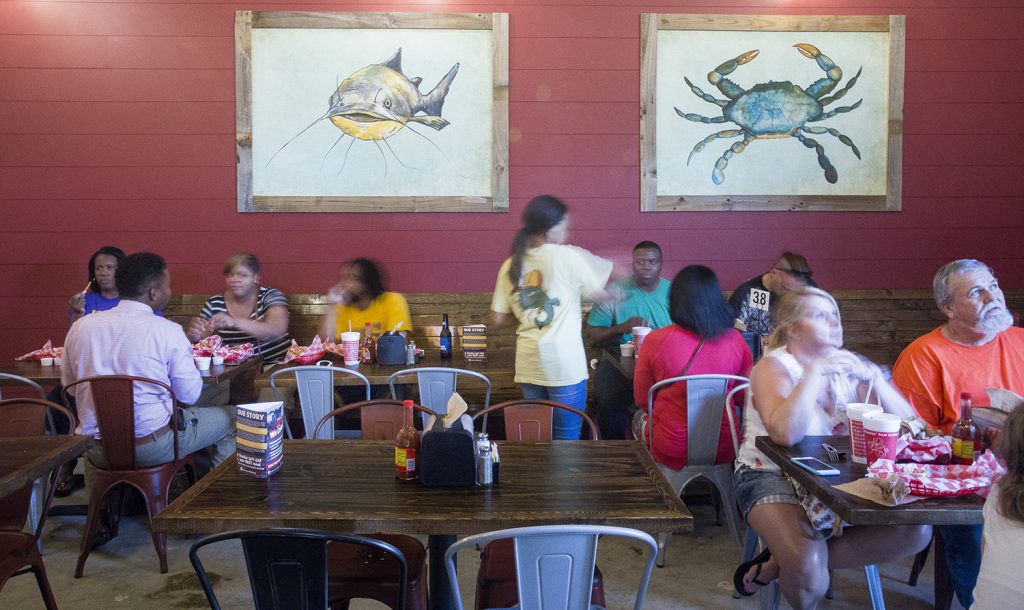 All furniture was built by Hester and his dad with reclaimed barn lumber. 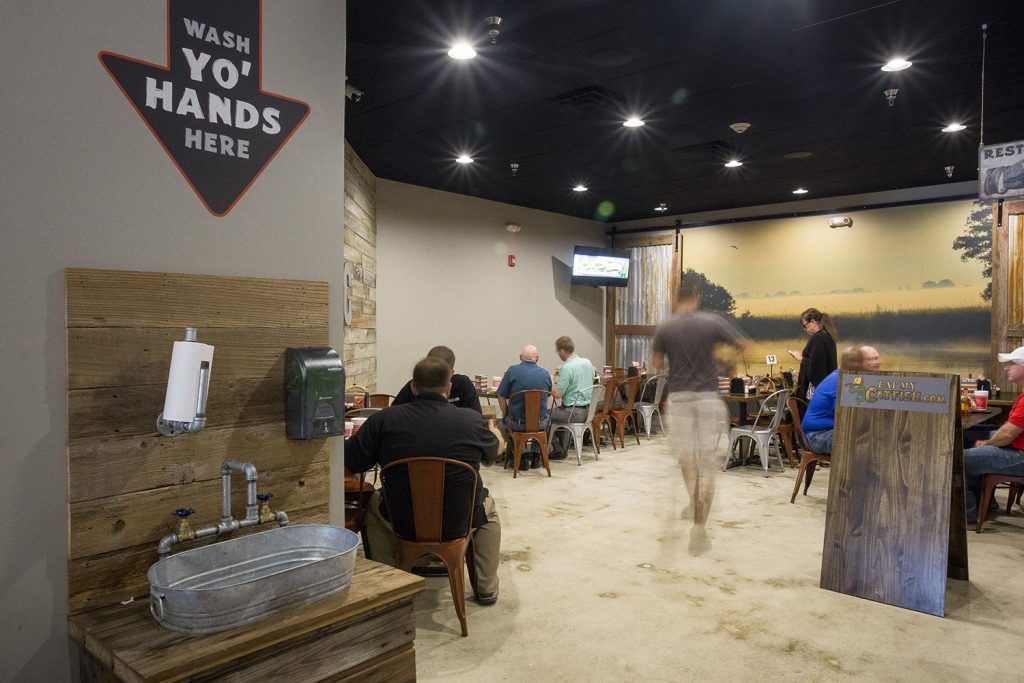 The retro galvanized steel tub is ready to clean hands after peeling and cracking.

Eating shrimp was another given. Each July, Hester’s granddad would take his boat to the Gulf of Mexico and come back with ice chests filled with 150 quarts of shrimp. “For the next two to three days, the family would sit on the carport and ‘pinch heads’. And for the rest of the year, shrimp would be part of our meals.

After high school, Hester attended college in Dallas studying finance and management, while working as a waiter. When his then girlfriend Jessica said she was moving back to Arkansas, he did too. He knew food would be his business of choice.

Hester opened the Eat My Catfish food truck on Military Road in Benton in 2008. While food trucks are fairly common in Arkansas now, they were not then. “The first week we used one case of catfish. That’s in comparison to more than 300 cases a week today.”

The first six months were tough. In addition to his need to legitimize eating at food trucks, the country was spiraling from an economic collapse. When asked how his girlfriend Jessica, now his wife, was feeling about his venture he laughs. “I’m sure she had to be wondering what I was doing, but she never questioned it. She’s always supportive.” 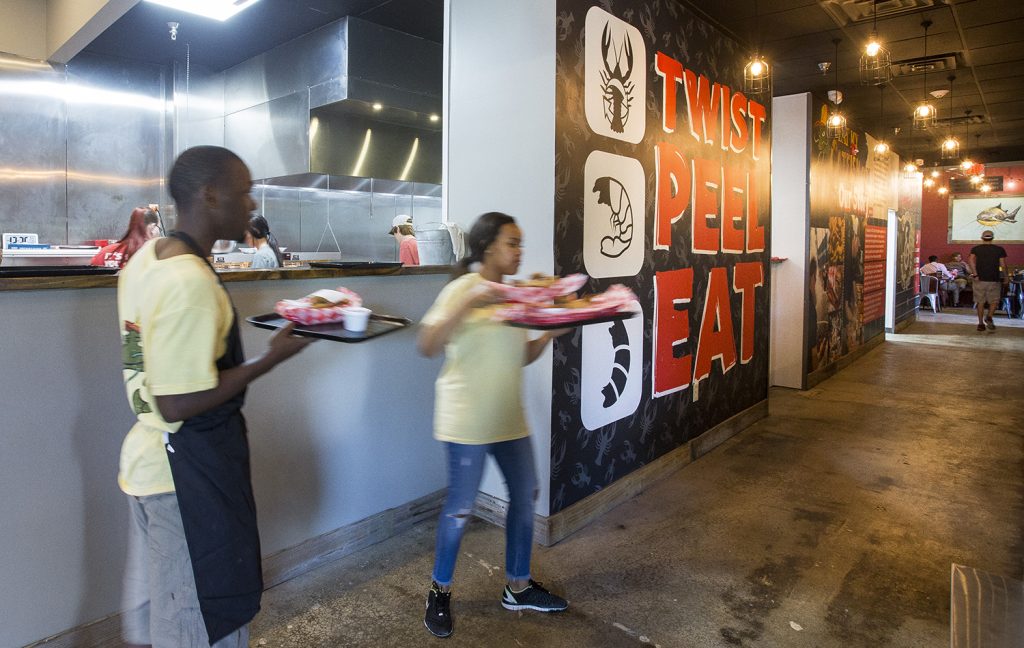 Today there are two Eat My Catfish food trucks that stay busy satisfying catfish cravings around the state. This particular week they have served more than 3,000 diners at catering events. “We did 350 events last year from Fayetteville to Forest City.” Hester also has two mascots — Willie Catfish and Muddy Crawfish. Their logos can be seen on kid’s softball and baseball teams the restaurants sponsor in Benton, Conway and Little Rock.

In addition to his mom Nancy Hester still helping out in the restaurant as she did with the food trucks, he also brags about his 80 energetic and ambitious employees in his three locations. “Each restaurant has its on personality, and we’ll keep it that way,” stated Hester.

Besides good food, the other common denominator with the three locations is they’re kid friendly. “Our service is quick, the food is fresh and inexpensive, and there’s no problem with volume or kids running around.” The thought makes Hester smile.

When asked about Eat My Catfish becoming a national franchise, he shakes his head ‘no.’ The dad of 1 ½ year old Talley with another girl on the way for the New Year, his priority is being a present dad. “I may open a couple more restaurants in Arkansas, but, I want to be home with my daughters.” Hester says the hustle and bustle isn’t worth it if you can’t enjoy what you’re working for. “I want to make certain I have time to be the dad and husband I should be.”