Since 2012, Bentonville’s Pressroom has been a go-to spot for locals looking for great coffee and sandwiches near the downtown square. Originally located in a century-old building on Central Avenue, it had an appealing funky vibe, complete with a yarn-bombed bicycle hanging from the ceiling.

[dropcap]Thanks[/dropcap] to a new chef, progressive menu changes and a move to swanky new digs, Pressroom is ready for its close-up. But fear not, you can still get a great cup of coffee.

It was the love of a woman that helped Ropeswing Group snag Michael Robertshaw, an established star in the Seattle restaurant scene. Robertshaw was in the throes of opening ROUX, his fifth restaurant in the city, when his long-time girlfriend followed a job opportunity to Arkansas. After a couple of years trying to manage a long-distance relationship, the opportunity to lead the reinvention of Pressroom came along, and Robertshaw pulled up roots and joined her. Lucky us.

The entire vibe of the “new” Pressroom is one of casual urban sophistication. Simple signage on the building’s exterior creates a Zen-like expectation on approach, and the open-concept dining space delivers. Several seating options are situated around a large, central bar. Upholstered seating is available for intimate gatherings, traditional two- and four-top tables, booths and bar-height tables are also available. A patio space provides a spot for people-watching during nice weather.

Two walls of windows provide an outstanding vantage point from which to observe the goings-on of one of the country’s fastest-growing small towns, including the Bentonville Farmers’ Market, which sets up just across the street from the building several mornings each week. The natural light plays perfectly with the industrial-modern décor. Materials like concrete and tube steel, and muted shades of gray and white are warmed by the natural wood tabletops and colorful modern art on white walls. 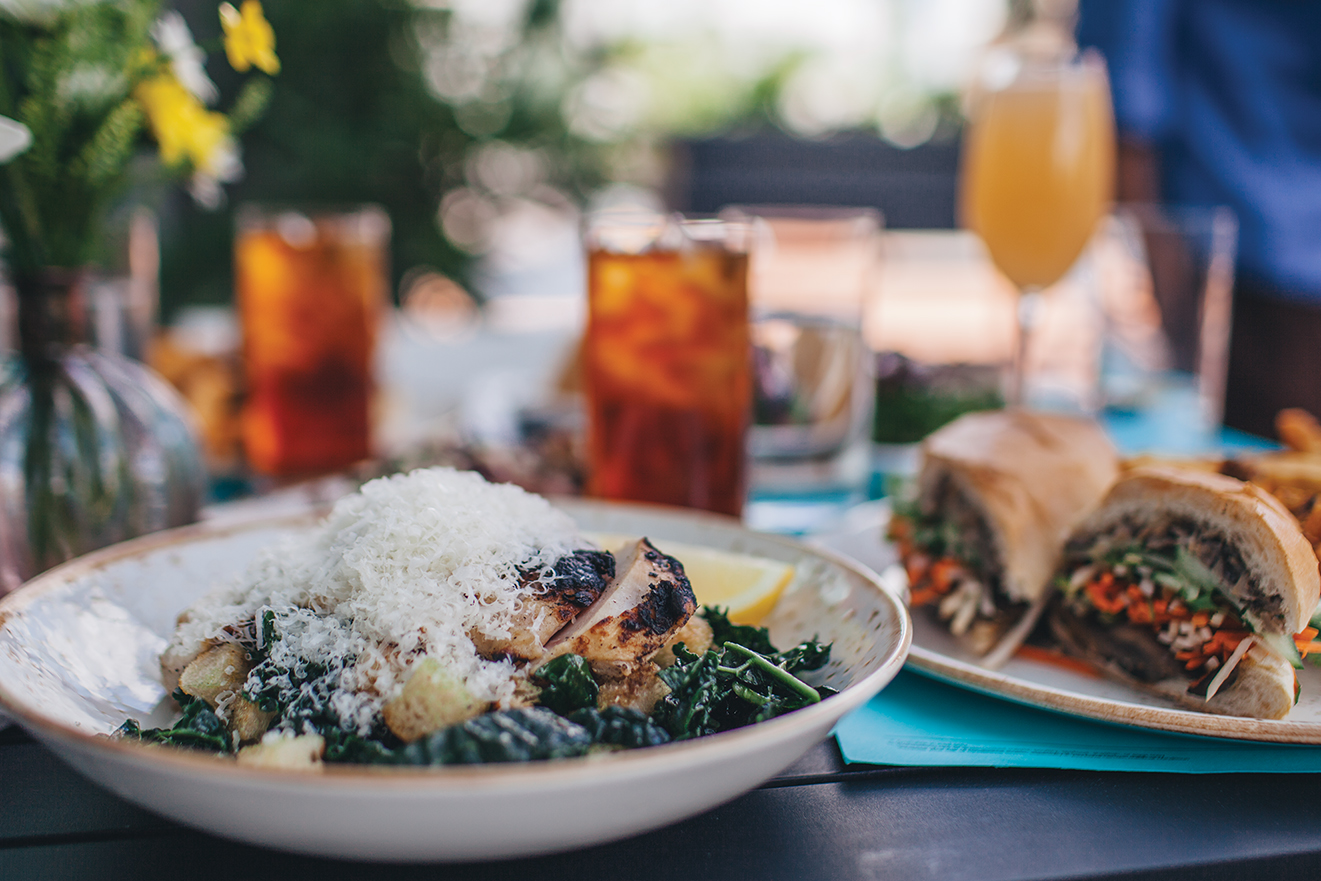 There are four menus at Pressroom — breakfast, lunch, dinner and dessert — and each one is uniquely creative. Robertshaw sources his ingredients locally whenever possible and has introduced his staff to the process of creating menus that respond to the season, rather than sourcing from out of the area to match an arbitrary menu. In-house printing options allow him to stay flexible, based on the ingredients he has available from week to week.

The breakfast menu is made up of the chef’s version of familiar dishes, such as organic oatmeal, malted buttermilk pancakes and huevos rancheros; each priced at $9 to $10. There are a handful of breakfast sandwiches as well, served with roasted potatoes or salad and bread. Coffee comes from local roaster, Kennedy Coffee. A nice selection of hot teas is also available.

Dinner features a roster of seafood options such as honey walnut prawns and barbecue octopus and a lovely list of dishes that make a vegetable or fruit the star. The caramelized sweet potato ingredients of tahini, buttermilk, cilantro, mint, shallots, serrano, lime and goat feta are positively mouth-watering. A longer list of various meat-lovers’ options includes lamb tartare and Korean chicken fried chicken.

We stopped in for lunch and found options on the menu that included seasonal soups, salads and sandwiches. Veggie sandwich options are offered alongside a traditional half-pound bacon cheeseburger. We ordered a cup of soup and a salad to start.

The curried cauliflower soup, priced at $5, was ladled up in a generous portion and served with a drizzle of olive oil and sprinkle of chopped chives on top. It was creamy and fresh tasting, not at all heavy as you might expect from a creamy soup, a perfect springtime offering. The curry flavor was not overwhelming, allowing the vegetables to be the star. 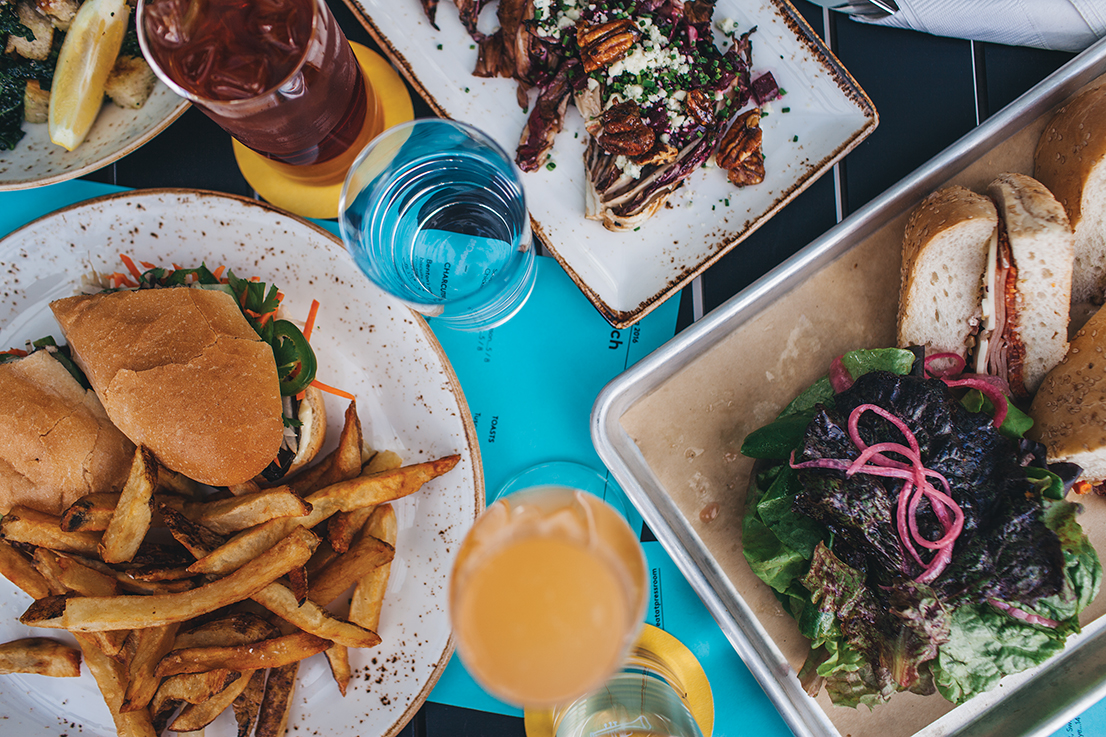 The shaved broccoli Caesar salad turned my world upside down. As someone who typically prefers her broccoli with a generous side of cheese and rice and baked in an oven, I can honestly say that I have a new favorite preparation. After thinly shaving the broccoli into slices, Robertshaw lets them marinate a bit in the house-made Caesar dressing, a step that infuses flavor and softens the crunch that might be off-putting for folks who turn their noses up at raw veggies. The broccoli was covered with a snowfall of grated Parmesan and piled onto a large sourdough crouton, also known as toast. A bite of the smoky bread and tartly-dressed broccoli was unexpectedly inspiring.

Our sandwiches arrived quickly, served with thick-cut fried potatoes. These are not the steak-house fries you might think of when you read “thick-cut.” They are thicker than fast-food fries, but thin enough to develop a wonderful crispy crunch on the outside while maintaining a soft texture inside.

The veggie banh mi utilizes the natural “meaty” texture of caramelized mushrooms to enhance a vegetarian sandwich bursting at the seams with flavor. Julienned carrots, daikon radish and cucumber accompany cilantro, jalapeno peppers and aioli on a crispy-soft baguette. The sweetness of the marinade used on the vegetables was delightful, and the jalapeno provided a lingering heat that I found hard to put down. If you don’t enjoy a pretty assertive heat, this sandwich might not be for you. On the other hand, it’s not hot enough to make you cry.

The muffuletta is so authentic you’ll expect to see Mardi Gras revelers pass by the windows as you dine. We ordered a half, which was more than enough for two people, especially with salad or soup. Creamy provolone cheese and three kinds of salami were layered with a generous amount of olive relish. The sesame-seeded roll was soft and flavorful.

The breads used in both of the sandwiches were outstanding. They are sourced from two bakeries, Briar Rose in Farmington, just west of Fayetteville, and Leidenheimer Baking Company in New Orleans. I often find rolls overwhelming on sandwiches and end up taking them off to enjoy the insides of a sandwich, but not this time.

We skipped dessert, sadly. The rhubarb profiterole, a streusel-topped cream puff with rhubarb jam and served with orange-earl gray ice cream and rhubarb foam, sounded amazing. Or, for a more traditional date-night nosh, the cookies and milk with milk chocolate ganache, dark chocolate cookies, mascarpone cream and Fleur de Lait ice cream might do the trick.

Folks who have visited Pressroom before while in Bentonville will feel they are in a completely new place … because they are. The re-boot is a reflection of what is happening in the region: what was already great is evolving into something … not necessarily better, just different. And different is definitely good.