Flavorful. Charming. Customer driven. These are just a few words I’d use to describe Graffiti’s Restaurant.

[dropcap]A[/dropcap] longtime favorite for many diners, Graffiti’s unassuming, yet pretty, interior and relaxed atmosphere hosts patrons dressed to the nines as well as those coming in from a round of 18. And owners Patrick Dayer and David Jones wouldn’t have it any other way.

Restaurant legends Ed Moore and Paul Bash opened Graffiti’s in fall 1984. The two worked together at the famed Jacques & Suzanne and opened a number of successful restaurants, including The Purple Cow and 1620. Bash and Moore later sold the bistro to Dayer and Paul McGehee. Jones joined the staff at Graffiti’s in 1997 and has served in several capacities.

“I’ve been on board a long time. I’ve served as a bartender, assistant manager and manager,” he said. He became Dayer’s business partner in 2009. 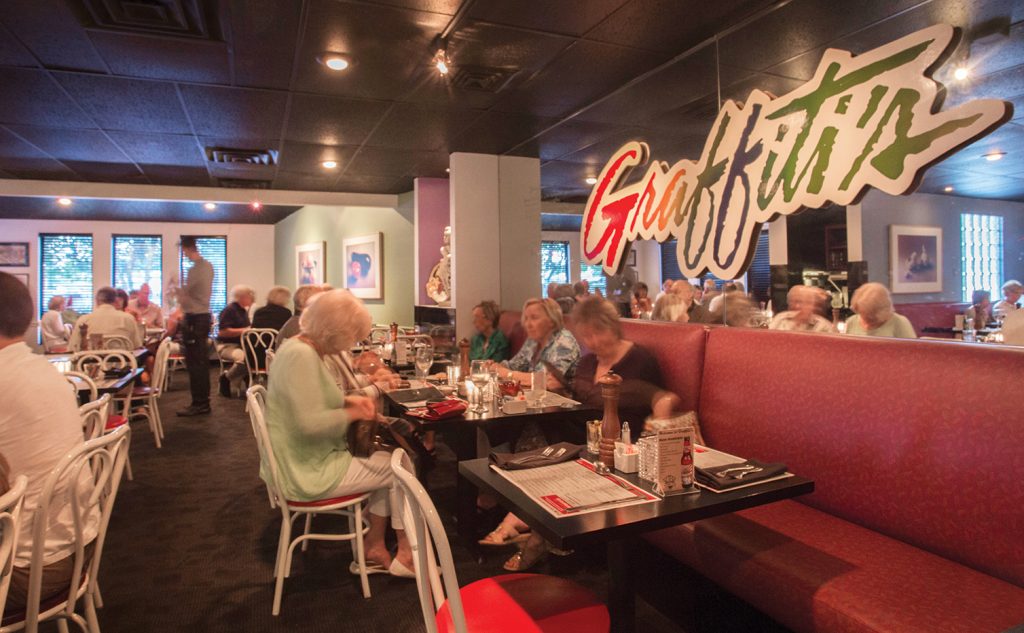 Graffiti’s interior is a comfortable, intimate space — a perfect complement to its delicious Italian cuisine.

I visited Graffiti’s for the first time several months ago. Friends invited my husband and me to dinner saying, “You’ll love the martinis, and the garlic bread is delicious. Our favorite entree on the menu is the spaghetti and meatballs.”

“Hmmm. OK,” I thought, having not been a fan of meatballs. I mean, you spend all that time forming the spheres and because of their shape, they take longer to cook and then the diner cuts them up to eat them! Seems a bit redundant, but OK. I’m not doing the prep work, so why not?

Jones’ love for the restaurant and its patrons as well as his excitement for his job was evident. He greeted our party of four as if we were friends not often seen. Once tucked into our table, our friends ordered martinis and garlic bread with extra cheese as an appetizer. The first was classically prepared and refreshing, the latter a piece of carb heaven.

I did not, however, follow my friends’ recommendation of meatballs. I opted for the al forno scallops over angel hair pasta. It was a delectable combination of tomatoes, garlic, shallots, capers and more in a buttery, white wine sauce. The portion was generous; I took the remainder home to enjoy as lunch the next day. It was just as tasty, if not more so, the following day. So, I declared that on my next visit, I’d try the meatballs.

It’s a few months later, and I’m back at Graffiti’s in my professional capacity, and I find Jones just as friendly and charming as he was the first evening I met him.

“We are in a good neighborhood that has supported us throughout the years,” he said, as I took a seat at the bar. “There are a lot of places for people to dine, so I don’t take [our customers] for granted. We get new customers all the time — you know, they hear about us through word-of-mouth — and that’s great. We don’t try to compete with other restaurants. We want to be certain all of our customers get a warm feeling when they come in, and that the food is wonderful.”

Jones said nothing comes out of cans. “We create our own sauces and try to keep things priced reasonably. We don’t want you to have to scrape your wallet to dine well, but we’re not [a national chain] either.”

Graffiti’s has a full bar and is known for its martinis — traditional and fruit- and flavor-infused — and a good selection of wines. They also offer weekly specials and housemade desserts, such as Italian ice, cakes — they rotate four flavors: carrot, German chocolate, chocolate on chocolate and Italian cream — tiramisu, Mount Vesuvius complete with local favorite Loblolly Creamery ice cream and caramel custard.

The menu includes classic Italian and American dishes with international influences. The beef tenderloin, served with a peppercorn or béarnaise, and the veal osso bucco are two of the restaurant’s most popular selections.

“We’ve had customers, who know authentic Italian food, tell us the osso bucco is a really good dish. We also offer an arctic char filet — not a dish offered everywhere,” Jones said.

If your palate calls for something a bit lighter during this season, you’ll love the summer salad. It is a refreshing mixture of fresh greens and fruits and spiced pecans; make it an entrée by adding pistachio-encrusted salmon, beef tenderloins, Latin chicken or Chinese five-spice shrimp. Graffiti’s also offers a number of entrees from the aforementioned Jacques & Suzanne.

So, did the meatballs live up to their reputation? I am happy to report they did. Each of the hand-formed spheres was well seasoned — the Italian sausage and beef a delicious combination, and each well worth the extra effort to create it.
I will be back, Mr. Jones. Martinis and spaghetti and meatballs, please.