The Restaurant at Terry’s Finer Foods is legendary in its home territory of Little Rock’s Heights neighborhood, but lovers of good food from all over the capital city — and beyond — should seek out this charming bistro.

[dropcap]When[/dropcap] you take the word “restaurant” and put the word “French” in front of it, some people get a little nervous. After all, the French are the folks whom Alton Brown, the amusing food genius behind “Good Eats,” once described as “fussy European gastronomes.”

That said, remind yourself of what France has given us  —  incredible wines, delicious cheeses, wonderful bread — simple, hearty fare that is the basis for a cuisine ranging from straightforward to, yes, unimaginably elaborate. But the middle ground is expansive, and its attendant dishes can be enjoyed wholeheartedly, without ever needing to reach for a French-English dictionary.

That’s what you will find at The Restaurant at Terry’s Finer Foods, a neighborhood French bistro that is a secret far too well-kept. From the kitchen of Chef Jeffrey Moore come dishes inspired by the traditions and techniques of France, ready to be enjoyed with a light heart and in good company. 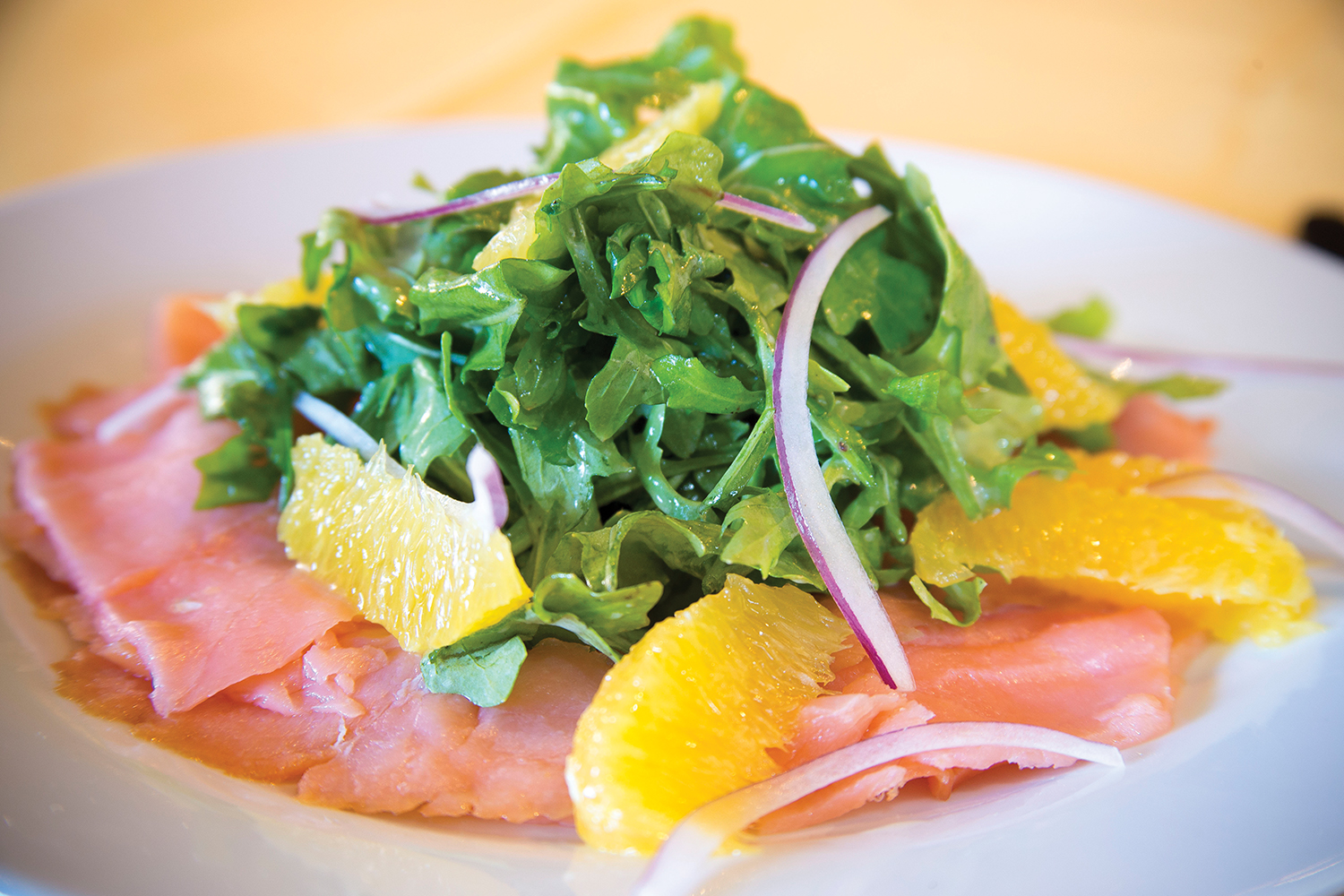 “It’s very much comfort food,” Moore said. “Honestly, I like being really simple with food. Get good ingredients, cook them properly and don’t complicate things.”
That approach is perfectly rendered in the smoked salmon salad. On a bed of arugula with oranges, red onion and tarragon vinaigrette, it is bright and fresh, both to the eyes and the palate. Generous slices of smoked fish ring the plate, and the vinaigrette is a quiet harmony to the rest of the flavors. 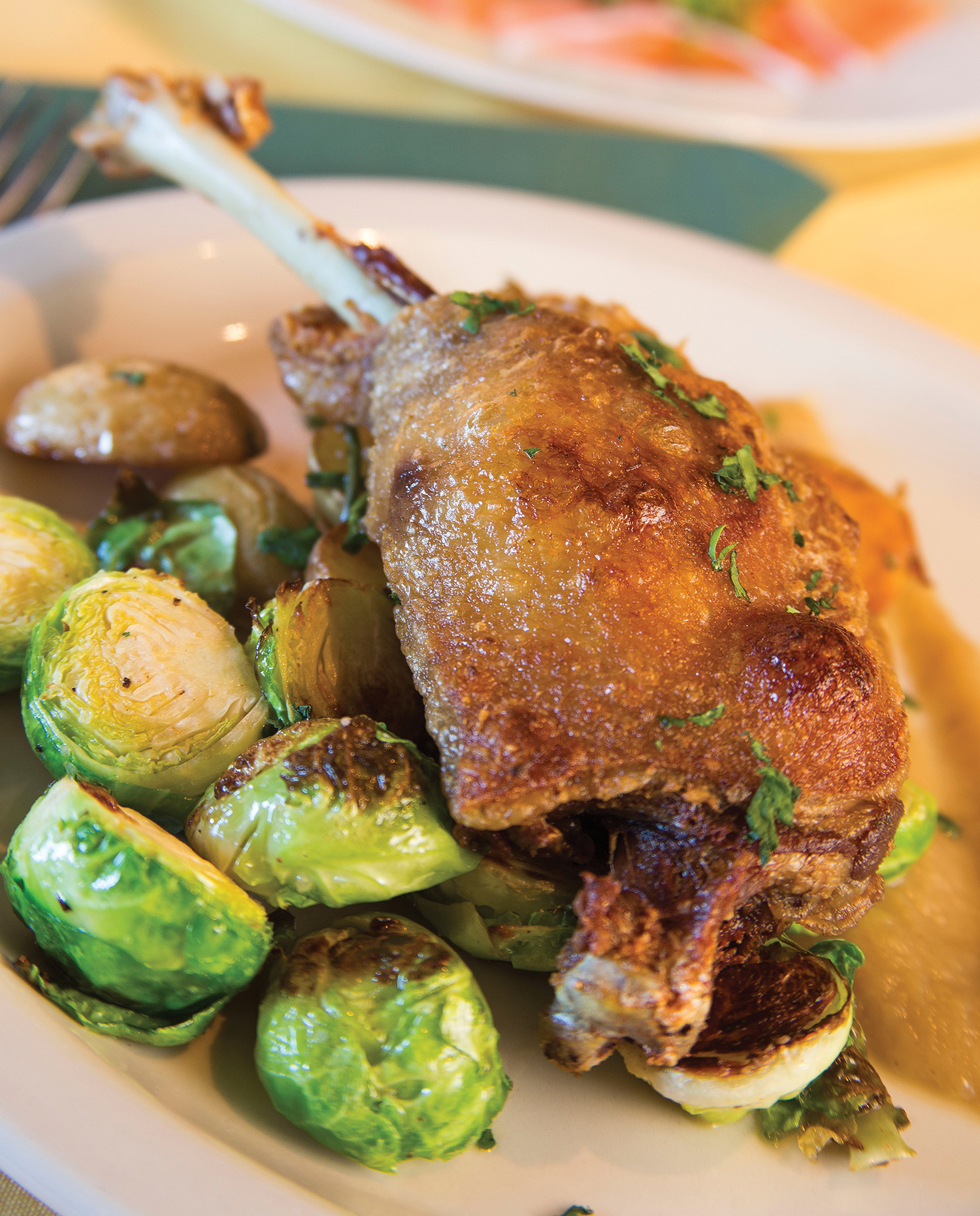 The first entrée presented is one you don’t see nearly often enough, in our own opinion: duck confit. The name “confit” denotes not a method of cooking, but one of preservation: The duck — a leg quarter, in this case — is salted and cooked low and slow in its own fat, a curing process that allows it to be stored many months. Moore then crisps it in the oven and serves it alongside Brussels sprouts, baby gold potatoes and a fennel puree.

Let’s start with that puree. It’s inspired! It may look like applesauce, but it has complex layers of flavors, from sweet to peppery, that delight the mouth. Beneath the enticingly crunchy skin, the duck itself is exceedingly tender — the kind of tender you normally associate with long hours in a barbecue pit. It is incredibly rich, and does, in fact, taste like something that required much time devoted to its preparation.

The restaurant has access to the quality, fresh ingredients stocked at Terry’s market, from which it is separated by just a wall. Moore said their fish, for example, comes from a buyer on the coast who checks the “day boats” for their fresh catch, packs the best samples on ice and sends them via FedEx. They’re at Terry’s less than 24 hours after they hit the docks. 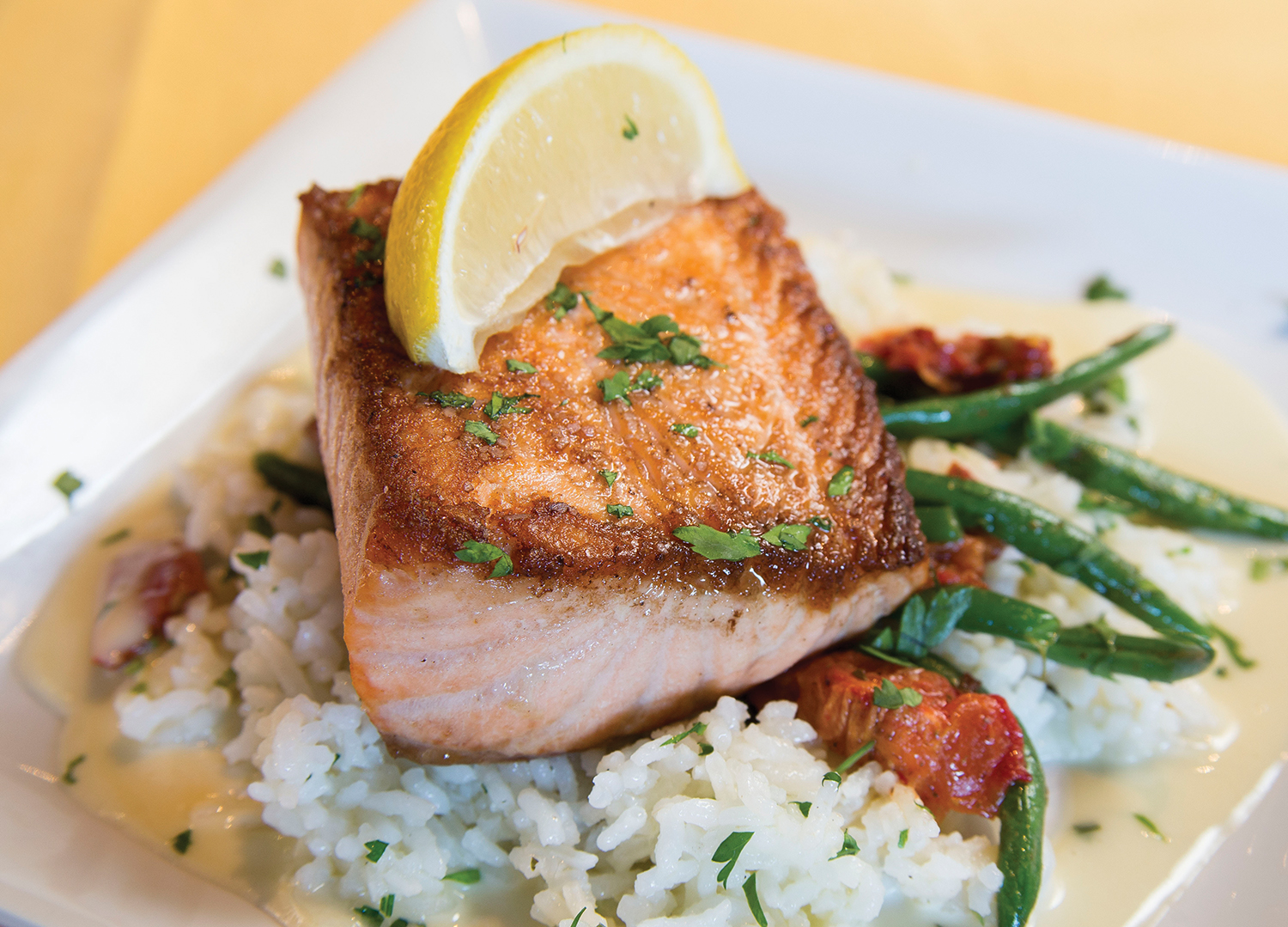 The freshness of that fish is evident in the pan-seared salmon fillet. Served on an herbed rice pilaf, it is flaky with an almost creamy interior texture — the perfect counter note to the crisp, seared crust. The luscious buerre blanc sauce is smooth and rich. It comes with roasted green beans, tomatoes and ham, which do an admirable job as a supporting cast, adding color and flavor without challenging the supremacy of the fish.

Moore finished our visit with a vanilla crème brulee. It was potent magic; the black specks throughout indicate this dessert was crafted with vanilla straight from the bean, and it showed in the wonderful tastiness.

The chef came to his culinary calling honestly. His grandfather, Ed Moore, was the original owner of Jacques and Suzanne, Graffiti’s and the Purple Cow.
“And he can cook a burger,” Moore said admiringly of his grandfather.

While he started learning to cook at about age 5, the family business isn’t where Moore developed his skills. At 15 or so, he went to work at other restaurants, so he wouldn’t be seen as riding his grandfather’s coattails.

“Rabbits. Leg of lamb every couple of weeks,” Moore said by way of example. He also likes cooking what’s available from local farms and changes the menu seasonally to keep diners’ interest. “Greens from Cabot. We had some delicious tomatoes until December. Squashes and gourds,” he said of the native bounty. “But not root vegetables. Honestly, Arkansas is not a very big root vegetable state.”

In the kitchen, Moore likes braising dishes such as, “Short ribs, coq au vin, beef Bourguignon,” he said. “I like being patient with it.”

The benefits of that patience show in the menu, and in the relaxed environment that wraps Terry’s patrons in dark wood, comfortable chairs, French art and an extensive and very fine wine list. Indeed, it’s easy to see why some folks might look at this French bistro and think it’s not the kind of spot you’d just pop in for dinner on a whim.

Moore, though, would beg to differ. Ultimately, he said, the atmosphere they aspire for at Terry’s is “simple and elegant.”

“People assume we’re a special occasion place, but we’re not,” he said. “You can come in and just sit at the bar and have frites and a beer.”