Ever heard of Wilson, Arkansas? It’s a town, population 900 plus, just off I-55 north in Mississippi County. 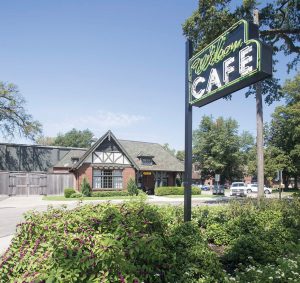 The Wilson Café had been closed for most of the past 10 years prior to the Cartwright’s arrival.

[dropcap]Nestled[/dropcap] in the Delta region it is surrounded by farmland, much covered at the time of our visit with acres of bloomed cotton plants. It looks like a lot of rural Arkansas towns until you’re officially in the town limits.

Highway 61 runs parallel to railroad tracks that split the town in two. Trains still use the rails to transport goods. Quickly, you notice the name Wilson on practically anything that can be labeled—storage tops, buildings. Lee Wilson and Co. at one time was the largest producer of cotton in the South.

With waning interest from younger Wilsons in managing the town, the family sold to a suitor interested in purchasing all of the land owned by the Wilsons, including the town and surrounding farmland. That suitor was Gaylon Lawrence Jr., a banker and landowner from Missouri who makes his home in Nashville. The town is reported to have been purchased for more than $110 million.

With visions of making Wilson a cultural destination, Lawrence’s first move was to find someone to reopen the Wilson Café. The restaurant had been a mainstay of the town, but had been closed off and on for more than 10 years. 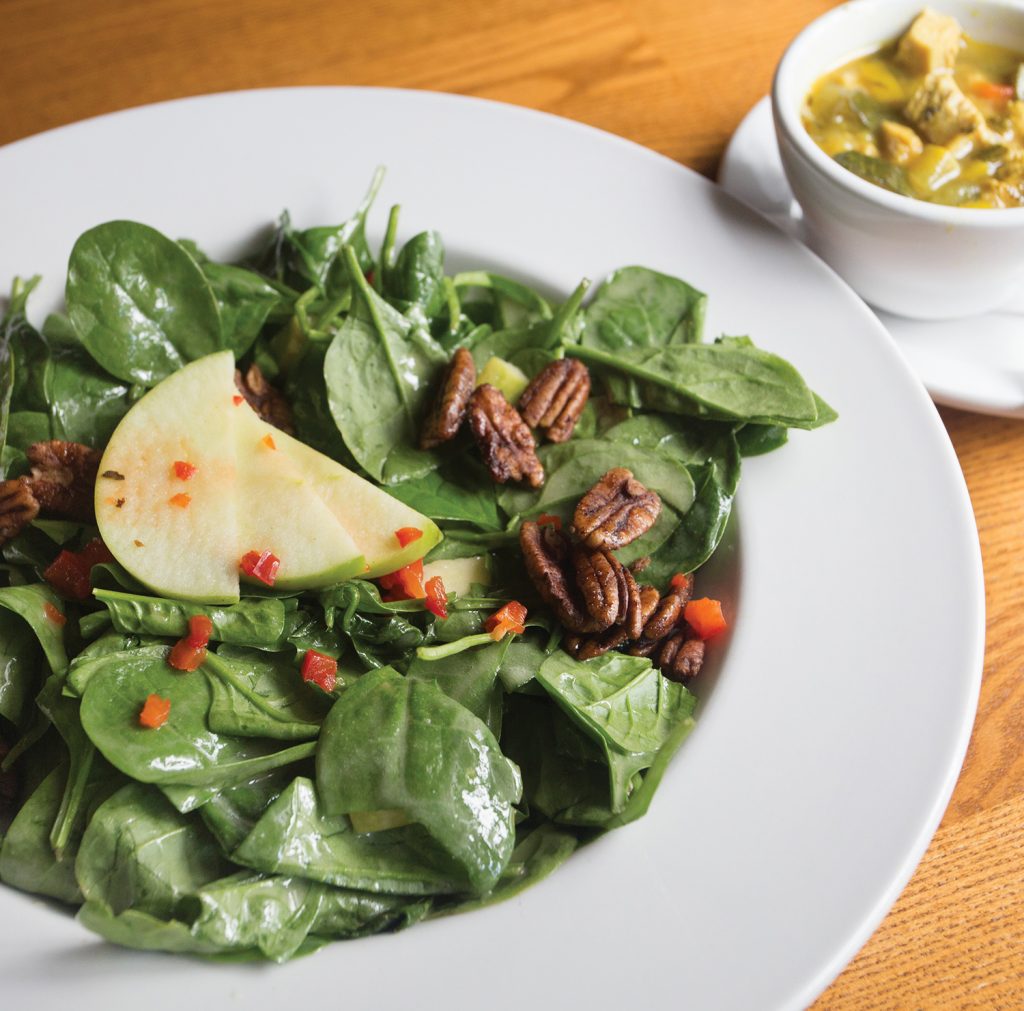 Southern favorites like pork loin and cheese grits grace the café’s menu as well as home made soups, salads and more featuring vegetables and fruits from the nearby Wilson Garden.

After numerous calls to Memphis restaurants in search of someone to manage the restaurant, Joe Cartwright, who was at the upscale Elegant Farmer restaurant, said he’d take a drive to Wilson.

“I was familiar with the area,” stated Cartwright. “I grew up outside of West Memphis, in Turrell and attended Arkansas State University.”

By all accounts, Lawrence is a visionary and certain of his desires. “Gaylon doesn’t speak in possibilities. He talks in absolute. There is no sell job. It’s this is what he envisions, when and you’ll be proven.”

Confident as Lawrence’s vision was, and is, Cartwright had his concerns. “Big picture ideas scare me. I stay in my lane,” he laughs. “His future isn’t five years from now. It’s 20, 30 years out; you actually feel foolish not to see it too. Obviously there’s risk, but there’s no questioning his commitment.” 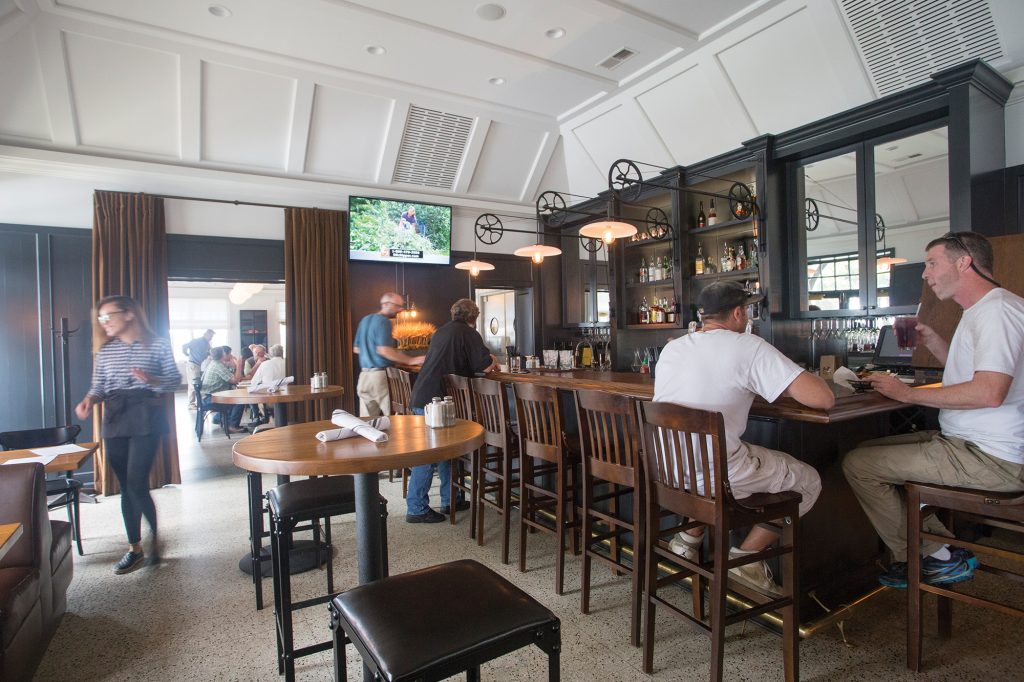 Diners begin to fill the restaurant for another busy lunchtime. The Wilson Café’s reputation is drawing foodies from Tennessee and Missouri.

So, what was Cartwright’s next move? He sold his home, quit his job and moved to Wilson. Oh yeah, he did have to break the news to his then fianceé Shari, pastry chef at the Elegant Farmer.

Born and raised in Memphis, Shari is a city girl. “It was a culture shock,” she says laughing, “Unlike Joe, I didn’t know anything about the county or much about Arkansas.” Arriving three months after Joe, she jumped in to help get the restaurant going.

As you can imagine, it wasn’t as if the locals were ecstatic to have the ‘outsiders’ coming in to save the day. “People were initially leery,” stated Cartwright. “Understand, Wilson had no restaurant for 10 years due to the country’s financial collapse and everything that brings,” explained Cartwright. “A few attempts off and on to reopen the café had happened without success, so people had their concerns about another reopening.” 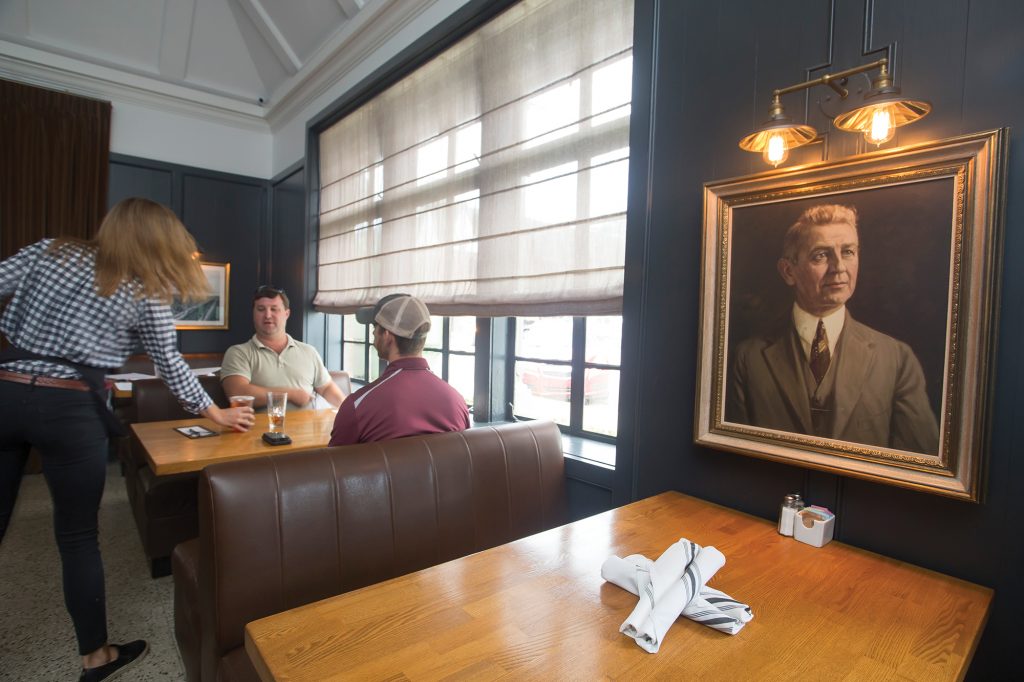 Mayor Becton Bell stops in for a quick business lunch. He is the first mayor elected not related to the Wilson family, original owners of the town.

The couple learned a lot of lessons quickly from the locals with reality checks. “We opened with what we know, high quality meats and produce. American beef, U.S. catfish. Our hamburger cost $12. The last time the restaurant was opened a burger was $7 and that’s what people remembered.”

Working to transition their new customers to their way of cooking, the Wilson Café’s menu changed several times within the first three weeks of opening, initially selling food cheaper than planned.

“Shari and I start with high quality domestic seafood, catfish from Mississippi; I could get cheap shrimp from Vietnam, but I want the quality provided by Louisiana shrimp,” explained Cartwright. “Our vegetables and fruit are from local small farms. Starting with high quality meats and produce and continuing that respect in the way we prepare them is very important to us.”

The transition worked. On a good day the restaurant hums with 110-125 diners. As rates increased appropriately to match the quality of food presented, diners have responded with regulars from Jonesboro, Sikeston, Missouri and Memphis.

The Cartwrights are the enviable position of having a generous financial supporter. “We were talking with Gaylon about the need to do some changes to the café—moving a stove hood, a couple of other things. He later shows up with an architectural rendering of the café’s new design!” Cartwright laughs. “Our diners were great about living through the renovation, and their excitement grew as they saw the changes being made.” 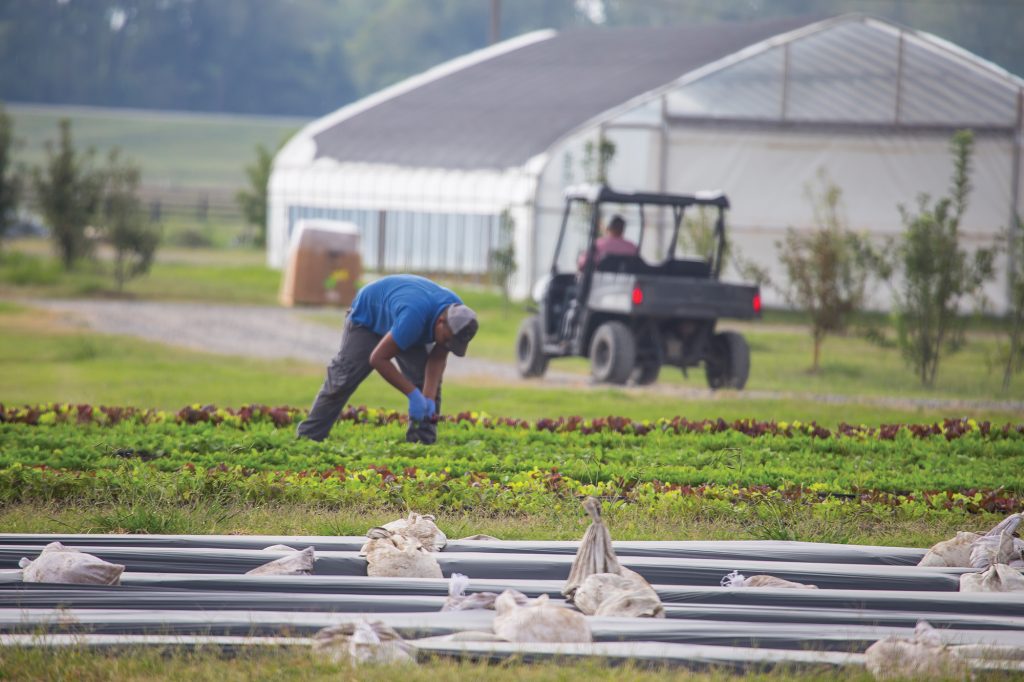 The Wilson Garden, which covers 100 acres, was resurrected from abandoned land. In the past four years it has expanded from two employees to 17.

The Garden  Across The Tracks 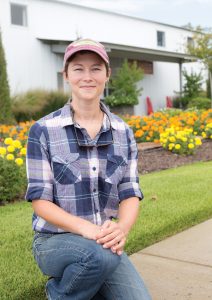 Joe Cartwright asked Leslie Wolverton — an organic farmer in Oxford, Mississippi — who he purchased produce from, to consider Wilson as her new home and workplace. The move has exceeded her expectations.

Cartwright’s excitement for Wilson is not restricted to the cafe. He insisted on taking a visit to the Wilson Gardens. With expectations of a plot next to the restaurant, the surprise is a 100 acres garden that stretches from the highway west to a levy next to the Mississippi River. It was another part of Lawrence’s vision for the town to have an organic garden. Cartwright knew the perfect person and called Leslie Wolverton, who he purchased produce from when at the Elegant Farmer.

Hesitant to leave the culinary adventurous Oxford, Mississippi, where she managed an organic farm, Wolverton reluctantly drove to Wilson, certain it would be her first and only drive there. She was wrong. Like Cartwright she could see Lawrence’s vision.

“You have to understand, this site was an industrial wreck.” In spite of that, the possibilities were limitless. There was also a challenge of making a difference.

This soil is of the Alluvial Plains, some of the most nutrition rich in the country, but little food is grown in this area anymore,” stated Wolverton. “We’re in a part of the country where health issues are life threatened. If you drive through Osceola, there are plenty of fast food chains, but it’s difficult to find locally fresh food.”

Starting in a tiny trailer in the middle of industrial junk, the land was cleared and the work began to reclaim the soil. At one time, the site had been a strawberry field, where the Wilson Company provided berries to the church next door, which then turned them into preserves.

Lawrence placed the execution of the garden into Wolverton’s hands with no restrictions or directions. It was hers to develop. The work began four years ago with Wolverton and one employee. “It’s been challenging, but very rewarding. We’re now up to 17 employees, all local.” 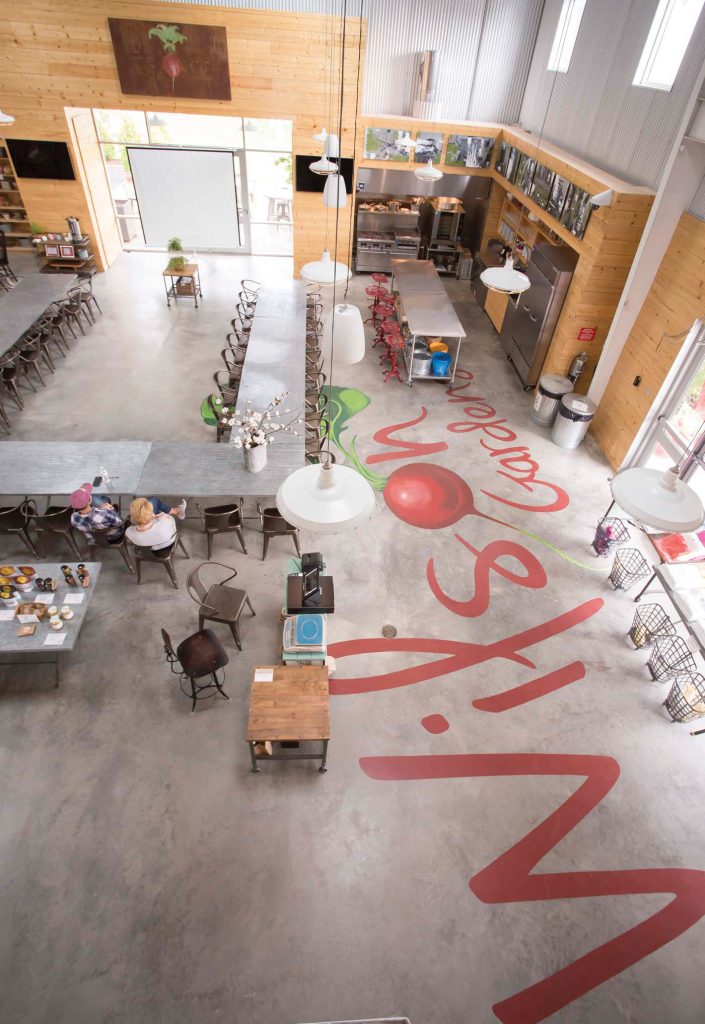 A look inside The Grange, the special event location at the Wilson Garden that hosts a variety of events.

Regardless of Lawrence’s financial generosity, Wolverton has sites on the farm being a profit center. “To be environmentally sustainable, we have to be economically self sufficient.” 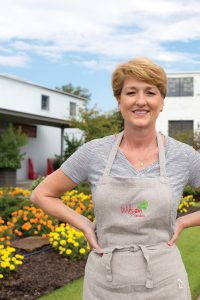 Lana Hughes of Blytheville, took on the challenge to landscape the flowers for Wilson Garden, the town square and the Delta School. For Hughes, it’s pure joy for her as well as to hear from residents who enjoy the results.

After the farm had taken shape, Wolverton wanted to expand the land to include flowers. A local connection encouraged Blytheville landscaper Lana Hughes to join in. “I had clients with my landscaping business in Blytheville, but it was nothing like this,” states Hughes in a raspy sophisticated Southern drawl. “How often do you have carte blanche to do what you imagine?” she says laughing.

Wolverton speaks to Hughes’ talented green thumb. “She took on the Wilson Garden, as well as designing, researching and sourcing plant material for the town’s grounds, the Wilson Estates and the Delta School.

On the Wilson Garden grounds sits a modern structure called The Grange. “Grange was a movement in the 1800s of continuing education to enrich farmers lives,” stated Wolverton. “I want this to be a learning hub. I want people to gather here to talk about food, meet around food.”

Already, The Grange has hosted events like a bourbon and bacon tasting, meetings for parents and teachers as well as business events. “I see the seven acres currently growing a variety of vegetables, to be a teaching and touring garden.”

Wolverton sees a culinary rebirth of sorts, evident with the participation in their CSA (Community Supported Agriculture). We have 45 people currently signed on from Wilson, Osceola, Blytheville, Jonesboro and Memphis who enjoy bounty from the garden. Her goal is to eventually have 200 on board. Next year, Wolverton would like to expand to farmer markets in Memphis and sales to restaurants in Little Rock. Her ideas to expand the reach and engagement of the farm and The Grange are endless and focused on meeting the continuing needs of the community in Wilson and across the region.

For Wolverton and the Cartwrights, the Wilson Garden and café are more than a farm and restaurant. It’s more than a hub for the town. It’s proof that dreams can become reality. That success comes in different forms.

“What’s special about Wilson, the garden, the new museum, the new homes springing up because of the Big River Steel mill up the road in Osceola is a sign that it’s okay to come back home,” stated Cartwright. 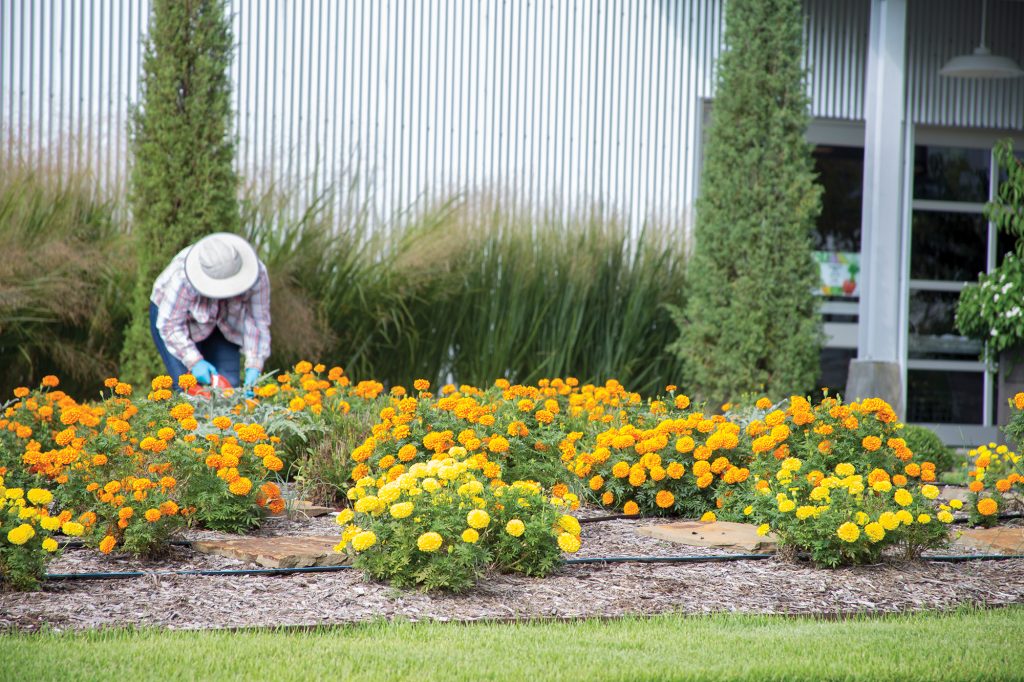 An immediate goal in progress is to be certified as an organic garden, a tedious process that will be determined in 2017 for the cultivated seven acres near The Grange; 2018 for the remainder of the farm.

His passion for Wilson speaks to a deep, long-seated frustration for a lack of appreciation for creative talent; a lack of it in too many places, especially for kids growing up in a small town as he did who aren’t necessarily interested in physical activities. “I lived on the other side of the tracks and understood I needed to get on the train or get hit by it! I want the artist, the socially progressive, teachers, chefs to be clear it’s okay to come here. The creative types can thrive here!”

Being in Wilson is not a whim for Joe or Shari Cartwright. “It’s important for people to understand we committed fully to Wilson before any of this was. Before there was the Big River Steel mill. We attend city council meetings and are involved in local events. Being here is a responsibility. It’s challenging. We’re not in Little Rock or Memphis where you can open a restaurant with the potential of customers lining up around the block,” explained Cartwright.

Like Wolverton, Cartwright says he’s playing the long game now. “When we first opened it was thinking of the next five years. In year three, we’re now looking at where things will be in 10 years.”

The Home for the Holidays Bucket List Begins at Edwards Food Giant
December 7, 2022
Go to Top
Never Miss An Issue!