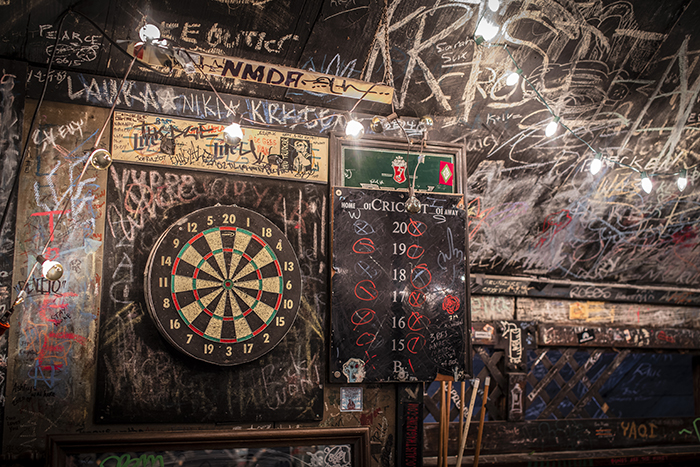 I was raised a good Catholic boy in the unfailing respectability of the Midwest. The mantra of my upbringing was, “shape up, fly right and beware getting caught up in the wrong crowd.” Maybe because of this preaching — or perhaps in spite of it — as an adult, I always took a shine to the grittier side of town — more romantic, more dangerous and somehow just more fun than my young life on the straight-and-narrow.

I imagine this is why today I find dive bars so appealing. If the fiber of a community can be judged by church steeples per square mile, then its backbone is measured by shabby little corner joints, the blue-collar joists of any neighborhood.

Or perhaps my love for dives walks in parallel lines with my love for history, as taverns of this sort are nothing if not an amalgam of all that came before, cataloged just so in souvenirs and mementos of days gone by on the walls, behind the bar, over the entrance or wherever they fit. And unlike the contrived miscellany of, say, your typical Applebee’s or TGI Fridays, a dive’s assemblage is the very stuff of authenticity, a collection that only comes with having been there, done that. 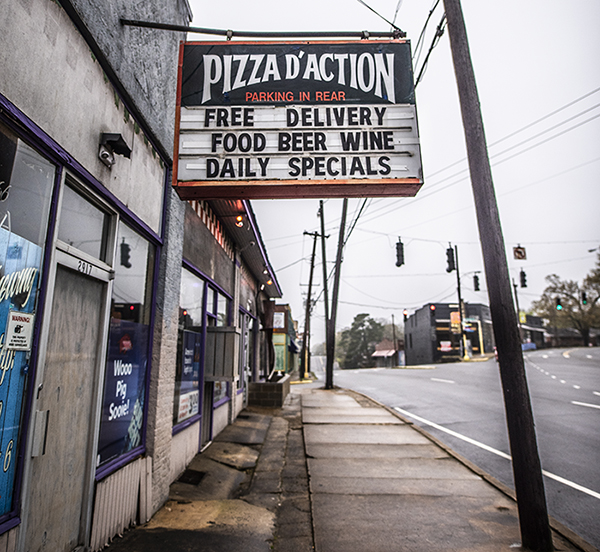 “I can’t tell you how many times I’ve heard married couples say they had their first date here,” says Matt White who, along with some local cohorts, signed the lease on the raggedy Little Rock institution White Water Tavern in 2007. “We are now seeing multiple generations of families who have called this place some type of spiritual home, if you will. Well, that or just a damn fine beer joint.”

Originally The Pitcher, White Water Tavern got its name in 1976 and has been listed the state’s best dive bar countless times by national publications. But even these accolades don’t come close to the love and loyalty the rickety music venue and neighborhood watering hole — burned and resurrected three times in its life — engenders in generations of devoted locals. 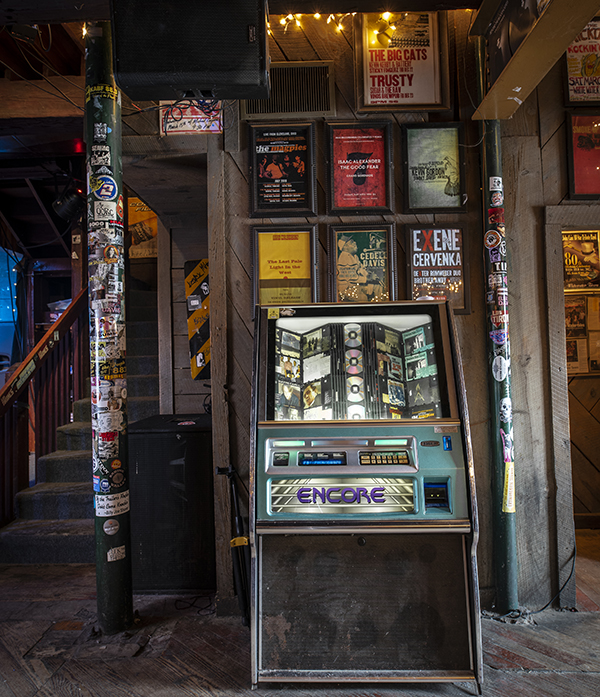 “This haunt is beloved by great people from both down the street and every continent around the world. Imagine the luck of counting them all as friends,” White says. “Sometimes the White Water feels like some kind of community center; we are grateful to be able to be here as a gathering spot and to lend a small hand from time to time.

“We’ve hosted weddings, funerals, baby showers, rallies and performances from just about any musical style you can think of. It’s a place that, I hope, welcomes people from all walks of life. We’ve witnessed an astounding and incalculable number of inspiring artistic moments from true world legends, our next-door neighbor and everything in between.” 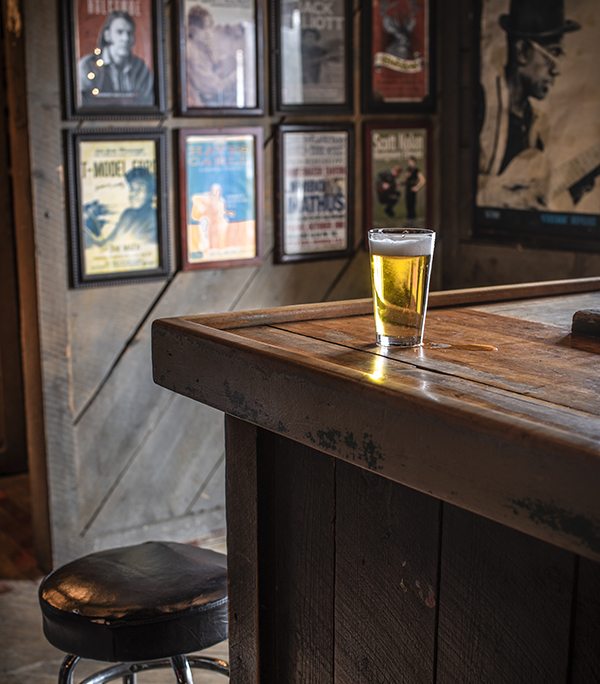 Contrary to what people think, the term “dive” isn’t so much a put-down as a cultural road flare, something to wave off the overly-sensitive or easily put-off. Within the graffiti-covered walls and smoke-soaked ambiance, dives set people free to be themselves or the somebody else that their weekday lives won’t allow.

Dive bars are the most elegantly American of all; the anti-establishment establishment that offers a wonderful distillation of who we are. The best dives welcome all as equal until their behavior or attitude says otherwise. It’s common-sense accountability that used to root society before pretentiousness and entitlement invaded like kudzu.

“I just have three rules here, that’s been since Day 1, that I stick by,” says Michael Brown, managing partner of Pizza D’Action, not far from White Water in the Stifft Station neighborhood of Little Rock. “Number one, provide a quality product. Number two, stay out of people’s [stuff]. Number three, let the place self-perpetuate.” 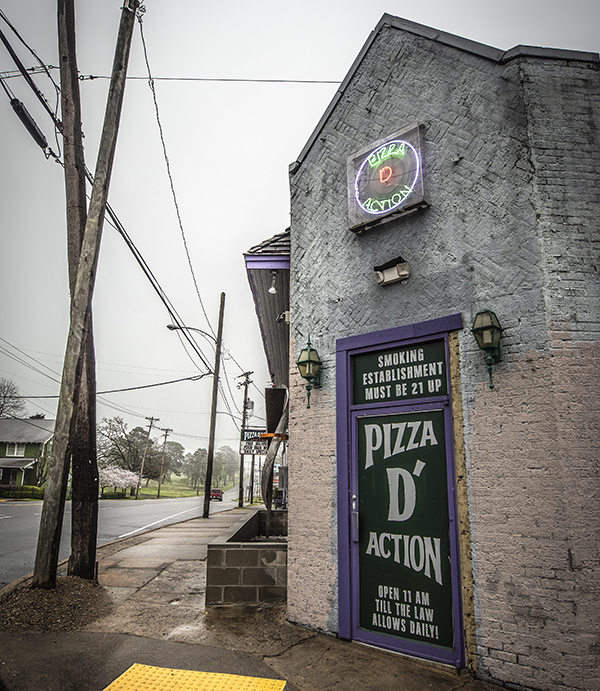 If Pizza D’Action took human form, it would likely look, sound and move like Brown, a whiskey-throated, thick-jointed, brightly-tatted veteran of the bar and club scene going back decades. He’s done every job you can do in this industry, but bringing the ancient dive bar and pizza joint back from the brink of condemned is arguably his best achievement.

“The main thing is, you know, this is something that was opened in 1976, 1978, something like that,” he says. “Knowing that, it is a staple here as far as a neighborhood bar which is what feeds it and gives it a general customer base. And then there’s an amount of love that I knew came from a certain demographic that has always come here.”

For years, Pizza D’Action exemplified what happened when the dive tag was used as an excuse to simply not do anything to maintain or improve. As the bar deteriorated, so did some segments of the clientele nearly causing the longtime joint to collapse upon itself. In just months, Brown and his crew arrested years of structural and reputational decline, elevating the food, service and surroundings without robbing the place of its soul. 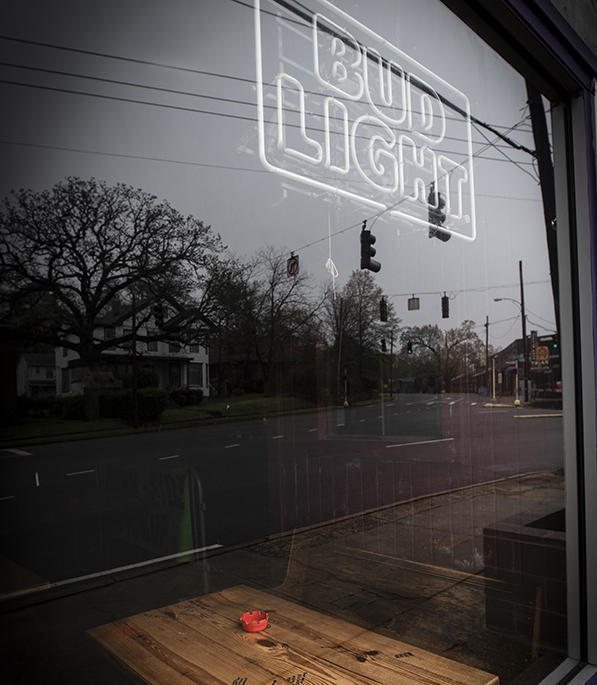 “I think what’s number one about places like this is familiarity. Everyone has this deal where it’s like, ‘Back when I went to Pizza D’s it was really cool,’” Brown says between drags on his cigarette. “What I do is look for something that I can take and improve and still keep the essence of the location.”

On a recent Saturday, the smoke still hangs heavy in the over-21 air, but ownership’s new philosophy is in full force through the friendly, laid-back staff and truly excellent food. If you know where to look, you can see mementos on the wall that are testaments to the bar’s commitment to the community — thank you notes from local nonprofits, a plaque or personal item in remembrance of a fallen longtime patron, a pride flag representative of the inclusive environment, which is also reflected in the staff.

“I have preachers who work for me in the kitchen and I’ve got people back there who listen to nothing but devil music,” Brown says. “And we all love each other.”

It seems like dives have always been with us, and they have — the pubs and taverns that fomented the American Revolution were in their day seen as dens of rabble, after all, a place the cultured and God-fearing would’ve avoided. But while the history of such joints is long, the future is uncertain. Dives are an increasingly endangered species, being replaced by bland and over-hyped corporate enclaves too bright and too safe for their own good. This is tragedy of the highest order, for with each dive that disappears, a critical bit of our nation’s personality and spirit goes with it.

“Places such as this are getting wiped out all across the country. Out with the old, in with the new. What a short-sighted shame,” White says. “The future is unwritten, but I hope the place never has to change too much and that the legendary White Water Tavern lives on long after I’ve checked out. No frills. Working-class. Nice folks. Cheap drinks. Bitchin’ jukebox. Funny old-timers. Scary bathroom. Sounds like my kind of joint.” 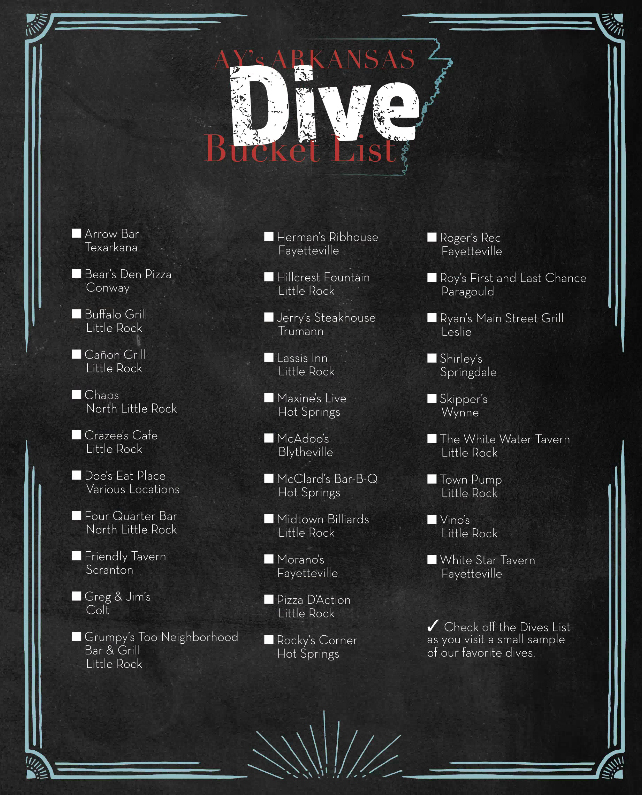