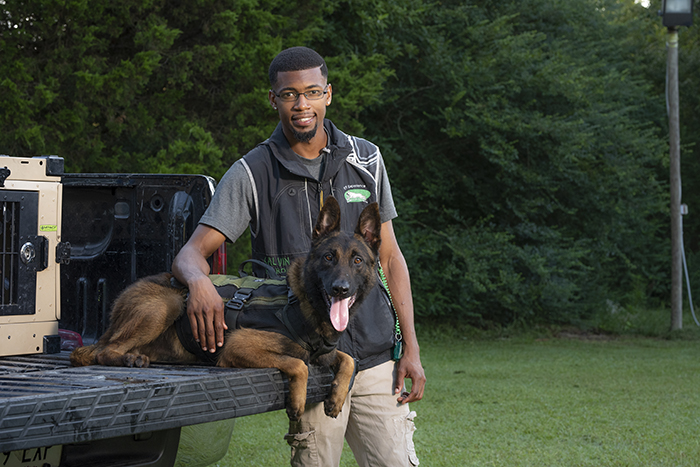 The door of the industrial-strength steel kennel opened and out strode a magnificent Doberman. With sleek, fluid motion the creature moved as one with the handler to another holding pen, creating a vacancy for the panting, grunting dog at the end of my leash.

“I’m going to have you put him in there,” says the soft-spoken trainer to my right. “Then we can get started.”

I’d brought Cash, our 18-month-old pitty-mix rescue, to K9 Experience for an evaluation of obedience training. As usual, our headstrong family member pulled at the leash like a sled dog and yanked in the direction of any other hound within view. Even in the shade of a massive tree on one end of K9‘s training ground, we couldn’t escape the Arkansas July heat. Sweat poured off of me as I walked Cash back and forth.

Trainer Calvin Wilbon analyzed our every move, his trained eye sparing no detail about Cash’s body position, mannerism and movement. 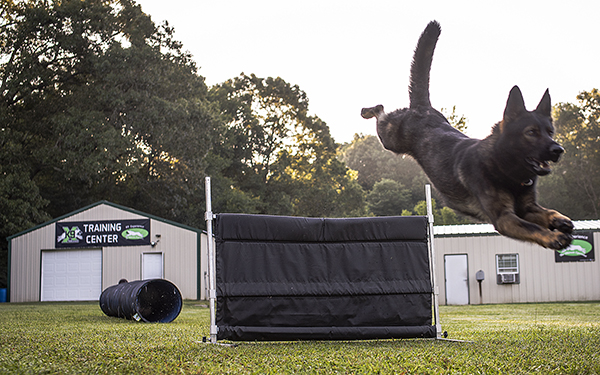 True to his word, Wilbon deciphered what Cash was telling him in a little more than five minutes’ pacing, a message conveyed from movement of the head and position of the tail. What merely looked like a hot, stressed-out animal to me was something far more nuanced to Wilbon. He can only explain it so much to other people.

“I feel like I’m the scientist trying to figure these dogs out and I come up with things and I test this hypothesis for a while,” he says. “And when I try to explain things to people it’s kind of hard because it makes common sense to me.”

You have to be looking for Little Rock’s K9 Experience to find it on the first try. Take the sign down off the metal building that serves as an indoor training facility and most people would drive right past it. But what it lacks in aesthetics, it more than makes up for in expertise. Wilbon and his mentor, veteran trainer Cecil Brannon, take on all comers, but they aren’t here to crank out one-size-fits-all puppy spas or babysit overly-pampered shih tzus. Their love for dogs is expressed in bringing out the best in each one and, just like with people, that doesn’t happen without putting in the work.

“As humans, we don’t necessarily know how other species take things,” Wilbon says. “A dog is like yourself being kidnapped by an alien. Just put yourself in that situation at seven years old as a kid. You have good motor skills; you understand some things. These aliens take you off, and now they’re starting to put leashes on you, they speak in different languages, they’re different sizes, and now you have to figure them out. It’s not necessarily them figuring you out; you have to figure them out.”

“People need to know that it’s all mental,” he goes on to say. “It’s dang near zero physical. I can literally control my dog without touching him. He doesn’t even have to be looking at me. My quote is, “if you can control the     mind then the body will follow. It’s a mind game.”

Wilbon said the biggest mistake owners make is treating the animal like something other than what it is. It’s not a question of whether a dog experiences emotions – they do – but most people assign wider and more complex feelings to their pets than are actually there. This causes people to communicate in ways that simply don’t register.

“You can’t give a dog human feelings,” he says. “So the way dogs think is, ‘Am I scared of it?’ or ‘Do I like it?’ If I allow a dog to go through a series of experiments by himself and he starts to choose between what he likes and doesn’t like, the ‘don’t like’ becomes fear. ”

Wilbon’s had a knack with dogs since before he can remember but stumbled onto his life’s true calling at 13 when a relative brought a German shepherd to Brannon to work. Wilbon, who’d never really felt connected or motivated to any activity or pursuit, was captivated.

Brannon, however, wanted no part of a skinny 13-year-old kid getting in the way. It would be six more years before Wilbon, who had been working with his personal dogs and also putting in some time with another trainer, saw an ad Brannon ran advertising for help. The elder trainer, who didn’t remember the youngster from before, didn’t hire him but let him stick around.

“I was out here, I’m listening, looking at the dogs. I’m like a sponge and I’m very detailed,” Wilbon says. “About three weeks in he asked me, ‘Do you want to get in the bite suit?’ At the time that was a scary thing, but my brain said, ‘yes.’ And I was like, ‘What did I just do?’”

“So I got in the suit and I got my tail handed to me by a 105-pound German shepherd and from that day, I was hooked. That was 2013. I wasn’t an employee or anything at that point. I was just out here to get tossed around by big dogs. I just stuck around, stuck around. A couple years went by and [Brannon] started to see that I was extremely dedicated.” 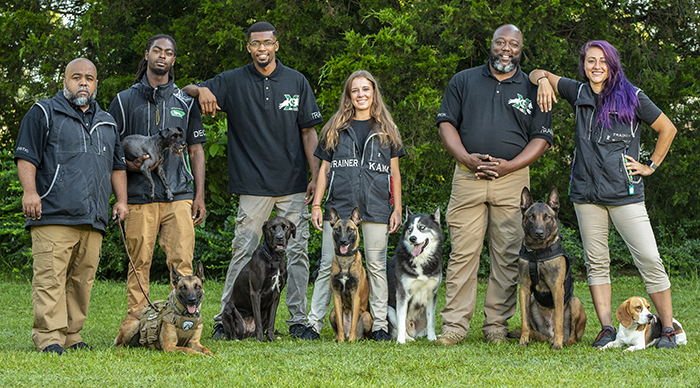 Founding Owner and Head Trainer Cecil Brannon (second from right) and his team of experienced training professionals. Brannon is a veteran of the US Navy and began dog training over 20 years ago at Little Rock K9 Academy.

Today, the only bond more palpable than that between Wilbon and his canines is that between him and Brannon. Unbeknownst to him at the time, Wilbon reappeared in Brannon’s life just as the elder was recovering from cancer treatment and his steady presence allowed Brannon to get well without shuttering his business. That behind them, the future is ambitious for K9 Experience, which turns out dogs for all kinds of personal and professional tasks. There’s even a reality show in the works.

“I’ve trained dogs for agility, bomb detection, narcotics, cadaver, any form of scent detection. Sport work, show ring, obedience,” he says. “I have extreme dogs in homes with kids, and they can save their life at the drop of a dime. I’ve got dogs that are military grade in homes with kids that let them pull on their ears.”

At age 24, Wilbon has introduced social media into the business and is constantly posting videos of his work to show the amazing things his student dogs learn. A few days after loading Cash into that kennel and driving away wondering if I’d done the right thing, Wilbon texted me a link. The 40-second video showed the before and after of Cash straining on the leash at drop-off and walking calmly down the street at Wilbon’s heel, ignoring several peripheral distractions.

Cash may have had three weeks to go in boot camp, but I couldn’t believe what he’d learned after just 24 hours. And watching that, I instantly understood the dog was only one part of the training puzzle.

“In two or three weeks, there’s no such thing as a fully trained dog, but I can get that dog to understand the way his life needs to go,” Wilbon says. “From there, we have a three-day handler’s course which we stretch out week by week. That’s when it becomes my job to teach people about their dog, teach them the do’s and don’ts, what to do, what not to do.”

“When we have our sessions, I give them a little homework so the dog will start saying in his mind, ‘My owner has some training, too. My owner is actually doing the same things that the guy was doing and I’m okay with this.’”

Dog Daze of Summer sponsored by 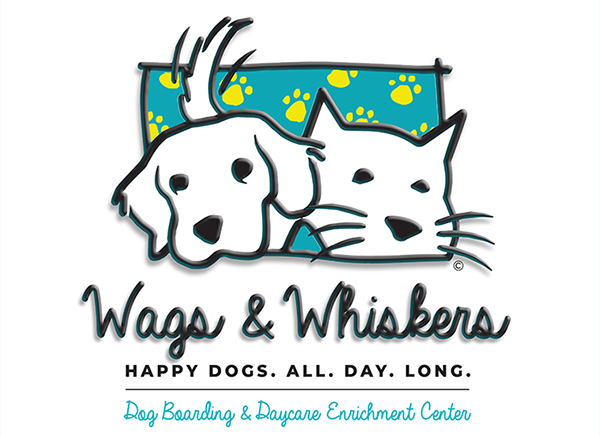