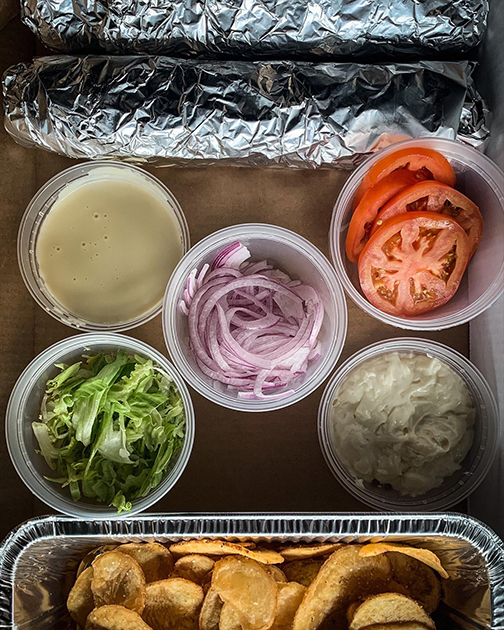 Whether it has been hosting a cool, 90’s-themed dinner or grilling Philly cheesesteaks on a flattop right on Main Street, you would be hard-pressed to name a restaurant in the area that has done more to connect with folks than Brood & Barley. The sister restaurant of Flyway Brewing, Brood & Barley opened during the pandemic and hit the ground running by offering up comfort food classics from a diverse kitchen staff. Several members hail from various areas around the country, and management has embraced the diversity by allowing them to add their touches to the menu.

Implementing a strong social media presence has also been critical part of the equation for the restaurant, not only as a way to stay connected with its audience but also to inform them about all the new and fun projects going on. One that recently caught my attention as I was scrolling through Facebook was the “Kick Ass Kurbside Menu.” Along with seasonal offerings of David Burnette’s house-made syrups and egg nog, the menu also includes three boxes. 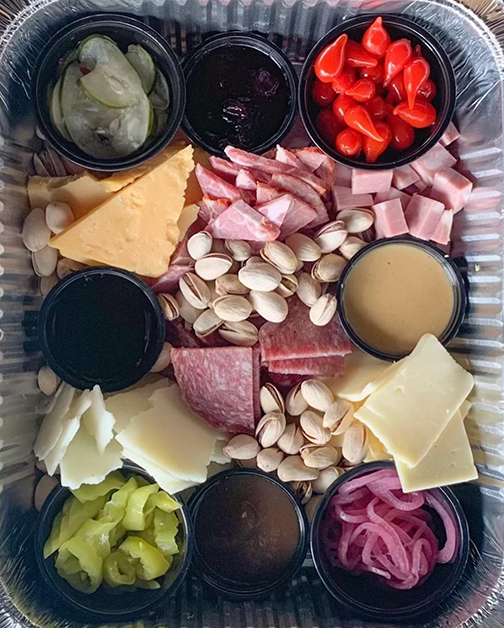 The Charcuterie Box ($69.99) comes with a variety of meats and cheeses, along with condiments like honey, blueberry compote, and mustard, as well as a bottle of wine (red or white) or a growler of beer. Brayan’s Legit Philly Cheesesteak Box ($45) includes two sandwiches with sides of cheese sauce, lettuce, tomato, onion, mayonnaise, and chips. You can add a growler for $15. Last, but not least, is Mel’s Poke Box ($55). This is the box that brought me to Brood & Barley on a Friday night. The meticulously and individually packed items inside included marinated sushi grade tuna, rice, tomatoes, pickled jalapenos, carrots, cucumber, poke sauce, crispy wontons, and hard-boiled eggs. Once again, you have the option of adding a growler for an additional $15, which I did with the seasonal POG (pomegranate, orange, guava) ale.

My family and I loved the food and I think appreciated that it was a healthier option, especially during the holiday season when heavier eating is so prevalent. Portions were big enough to satisfy this family of four’s big appetites, and all the ingredients tasted fantastic together in the bowl. I was particularly impressed with the chunks of raw tuna and strips of fried wontons. I could snack on the latter all day if you let me. While I would have preferred thinly sliced raw jalapeno, my wife quickly spoke up in support of the thick, pickled slices. 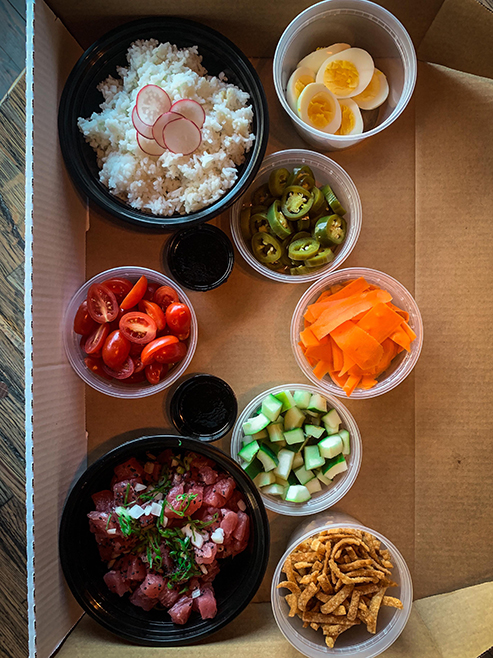 I enjoyed the ease and safety of being able to pop in and out of the restaurant within a few minutes, but also know that staff will deliver the food curbside, as the name suggests. Prices were reasonable, food was excellent, and service, per usual at Brood & Barley, was warm and attentive. I think they may have a hit on their hands with these boxes. While the poke was excellent, I will be trying that charcuterie box next time around.