Down in the Delta

It’s been said inside the halls of the state capitol and the boardrooms of Fortune 500 companies: If we could just lose the Delta, Arkansas would be among the fastest-growing, most economically diverse states in the country.

There’s an ugly truth to that. Outside of the thriving Jonesboro metro area, east Arkansas is losing residents by the day, and Delta-region counties tend to top the list of highest unemployment. But there’s much more to this region than meets the eye.

While most are familiar with east Arkansas’ agricultural prowess, few recognize it for its rich history and vibrant culture. And before long, the region will call upon that history, culture and tourism to both produce and help preserve its future.

The raw attraction of the Arkansas Delta stems from its history and culture, both of which have been refined for generations by the interactions between the people and the land – a crossroads to the past and present. It’s the sodden setting of the Arkansas Delta that inspired the literary minds of Ernest Hemmingway and John Grisham. The region left a permanent mark on a number of legendary artists who shaped music for a generation – artists like Johnny Cash, Sister Rosetta Tharpe, Levon Helm and more.

The Delta is still inspiring and leaving its mark on those willing to explore.

Visitors to the northernmost corner of east Arkansas are treated to the natural beauty changing vistas, rolling hills and dramatic bluffs. The region is divided by the geologic wonder that is Crowley’s Ridge, which creates one of Clay County’s most impressive settings. Once the location of a Civil War skirmish, the bluff borders the St. Francis River, which separates Arkansas from the Missouri Bootheel. The Chalk Bluff site, important both historically and geographically, is an Arkansas Natural Heritage Area and is listed on the National Register of Historic Places.

In nearby Piggott, visitors can tour the home of Mary and Paul Pfeiffer, whose daughter, Pauline, was married to Ernest Hemingway. The property features a barn behind the home that the Pfeiffers converted into a studio to give Hemingway privacy to write during his visits. He wrote portions of A Farewell to Arms in the barn. Arkansas State University purchased the historic property in 1997, and the house and barn were restored to the time period that Hemingway visited the house. The Hemingway-Pfeiffer Museum and Education Center is open to the public.

Like its neighbor to the north, the landscape of Greene County is dominated by Crowley’s Ridge. It was also home to the man whom it was named for years ago. Benjamin Crowley, head of an influential pioneer family, settled in Walcott, in what is now Crowley’s Ridge State Park, in 1825. The park where he once lived features a number of log and stone cabin facilities for guests, as well as campsites, trails and fishing lakes.

Mississippi County, named for the river that forms its eastern boundary, is known for its agricultural and steel outputs. But the county’s long-studied prehistoric culture, with at least 800 known archeological sites, is a draw for those looking to step back in time.

A nationally renowned collection of artifacts from one of the county’s many archeological sites – a 15-acre palisaded village that once thrived along the river – can be found in Wilson at Hampson Archeological Museum State Park. The museum interprets the lifestyles of a civilization that lived there from 1400 to 1650. Artifacts and exhibits compiled by the late archaeologist James K. Hampson, share the story of this early native population of farmers who cultivated crops, developed art, religion and a political structure.

A tugboat pushes barges of grain down the mighty Mississippi River past West Memphis.
Photo by Jamison Mosley

At Barfield Landing, visitors can take in the mighty Mississippi and watch as barges line up to serve the world-class steel plants nearby.

Nearby Dyess was the location of Colonization Project No. 1, established as a resettlement colony where tenant farmers were given the opportunity to purchase their own land. In 1935, a three-year-old J.R. Cash, who would later go by Johnny, moved to Dyess with his parents and six siblings. The “blackland dirt,” that on which Cash was raised, would shape him, inspiring him to write and sing some of the most iconic country songs in American music history. 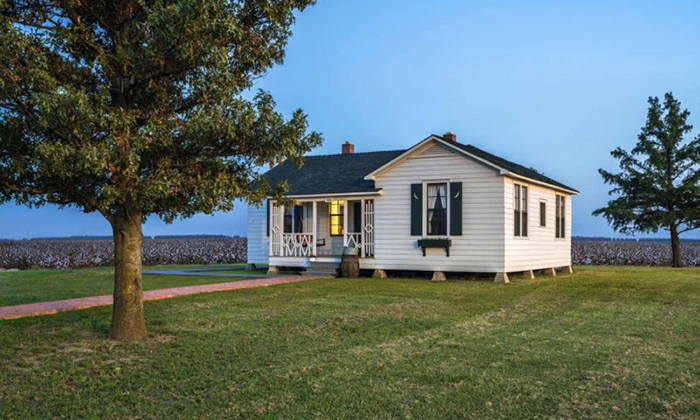 The home where he was raised is now open to the public as the Johnny Cash Boyhood Home, furnished as it was when the Cash family lived there. Surrounding buildings house exhibits about the colony and the impact of Dyess and the Arkansas Delta on Cash and his music.

Poinsett County, divided by Crowley’s Ridge, is made up of rich alluvial soil from the Mississippi River Delta on the east and prairie land to the west, giving visitors the opportunity to take in seas of white cotton, flooded rice fields and an assortment of hardwoods.

Poinsett County is home to a few small towns believed to be the only in the country to bare their names – like Marked Tree, Lepanto and Tyronza. Marked Tree, which was named for an oak tree that had been marked with a foot-high “M” believed to have been put there by a band of outlaws led by John Murrell, is home to the Sunken Lands Wildlife Management Area.

The Sunken Lands were created by the infamous New Madrid Earthquakes of 1811-12 when the earth buckled and gave way to water. The area is now nationally recognized for hunting and fishing, and waterfowl hunting accounts for the majority of the area’s recreational use. Some isolated stands of old growth bald cypress still exist in the area, and there are excellent opportunities for bird watching and wildlife viewing.

Some historians recognize Tyronza as a forerunner of the 1960s civil rights movement. Inside the community’s Southern Tenant Farmers

Museum, visitors can learn about the work of the Southern Tenant Farmers Union (STFU). This national union, established in the community in 1934 by 11 whites and seven blacks, included women and minorities in leadership positions. The museum, operated by Arkansas State University, includes photographic exhibits, artifacts, oral histories, music and video focusing on the farm labor movement in the South and the tenant farming system of agriculture. 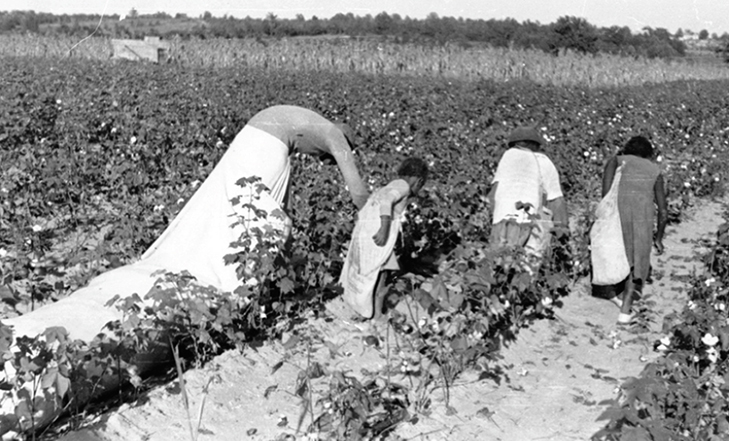 Artwork from the Southern Tenant Farmers Museum in Tyronza.

In Lepanto, visitors can explore the Chandler House, used in the film adaptation of John Grisham’s A Painted House.

Visitors to Newport, in neighboring Jackson County, can pay tribute to some of the most vibrant musical heritage of the Upper Delta. Newport is home to what was once one of the largest clubs in the state during the rise of rock n’ roll, the Silver Moon Club. The club helped fuel the rise of music legends like Elvis Presley and Jerry Lee Lewis, both of whom played the venue on numerous occasions. If Memphis was the birthplace of the budding genre, Newport was its nursery.

Cross County is noted for its beautiful, heavily forested landscape, making it a spectacular place to explore, especially during the fall. In Wynne, Village Creek State Park, Arkansas’ largest state park, is home to lakes Dunn and Austell, known throughout the region for incredible fishing. The park also features a 27-hole Andy Dye-designed signature golf course featuring the rolling terrain of Crowley’s Ridge, dramatic elevation changes and the backdrop of the surrounding hardwood forest. These combine with the PGA-caliber championship layout for an aesthetically pleasing and challenging level of play.

Nearby Parkin was the location of the largest fortified ceremonial mound and population center in the St. Francis River Basin during the Late Mississippian and early protohistoric period (1350-1650). The location is also believed to have been visited by Hernando DeSoto during his 16th Century expedition, and Spanish artifacts from the period have been uncovered there, including what is thought to be remains of DeSoto’s cross. 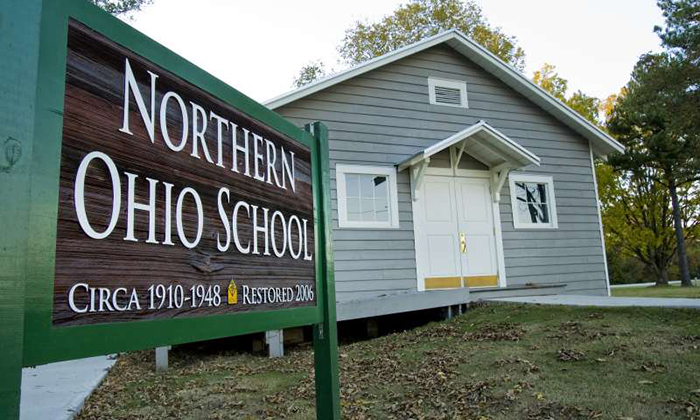 Travelers through the Upper Delta can venture even further into the past while in St. Francis County. Situated on the scenic rolling hills of Crowley’s Ridge, the county features reminders of an ancient past when the Gulf of Mexico covered the entire region. Visitors to the St. Francis County Museum in Forrest City can observe paleontological artifacts found at the bottom of Crow Creek, including ancient shark teeth. A mastodon jaw bone was recently uncovered from the creek bottoms and is estimated to be at least 10,000 years old. 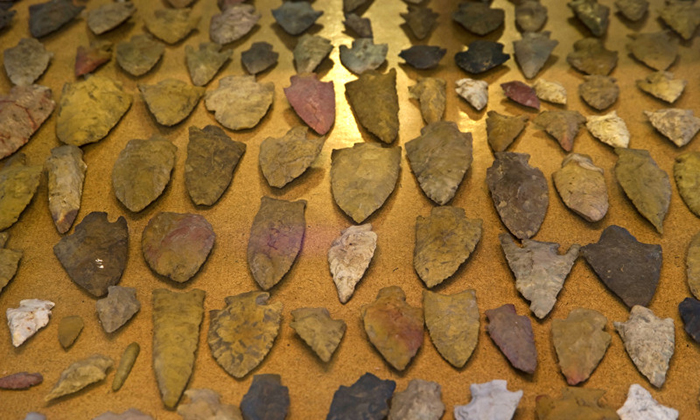 St. Francis County is also the final resting place of Scott Winfield Bond, a former slave who gained social prominence and became a self-made millionaire in the early 20th century.

In Colt, the hometown of Charlie Rich, is the historic William Stone House. According to oral history, the William Stone House was a Sears & Roebuck pre-fabricated house constructed around 1884. The Plain Traditional residence with applied Colonial Revival and Folk Victorian detail serves as a museum with displays on the history of northern St. Francis County.

Howlin’ Wolf played live on KWEM in West Memphis before hitting it big in Chicago.

Crittenden County, the state’s gateway to Memphis, has much to offer visitors. The area played a significant role in influencing the course of modern music through West Memphis’ historic KWEM Radio. The original KWEM allowed little-known Memphis-area artists to perform live. Among those to pay up were Howlin’ Wolf, B.B. King, Johnny Cash, Albert King, Scotty Moore and more.

Visitors to West Memphis can now stand directly over the big river at The Big River Crossing, which connects Arkansas to downtown Memphis on a nearly one-mile walkway built alongside the historic Harahan Bridge. The crossing owns the distinction of being the longest and public pedestrian bridge, providing unparalleled views of the mighty Mississippi.

READ MORE: Down in the Delta: Part 2