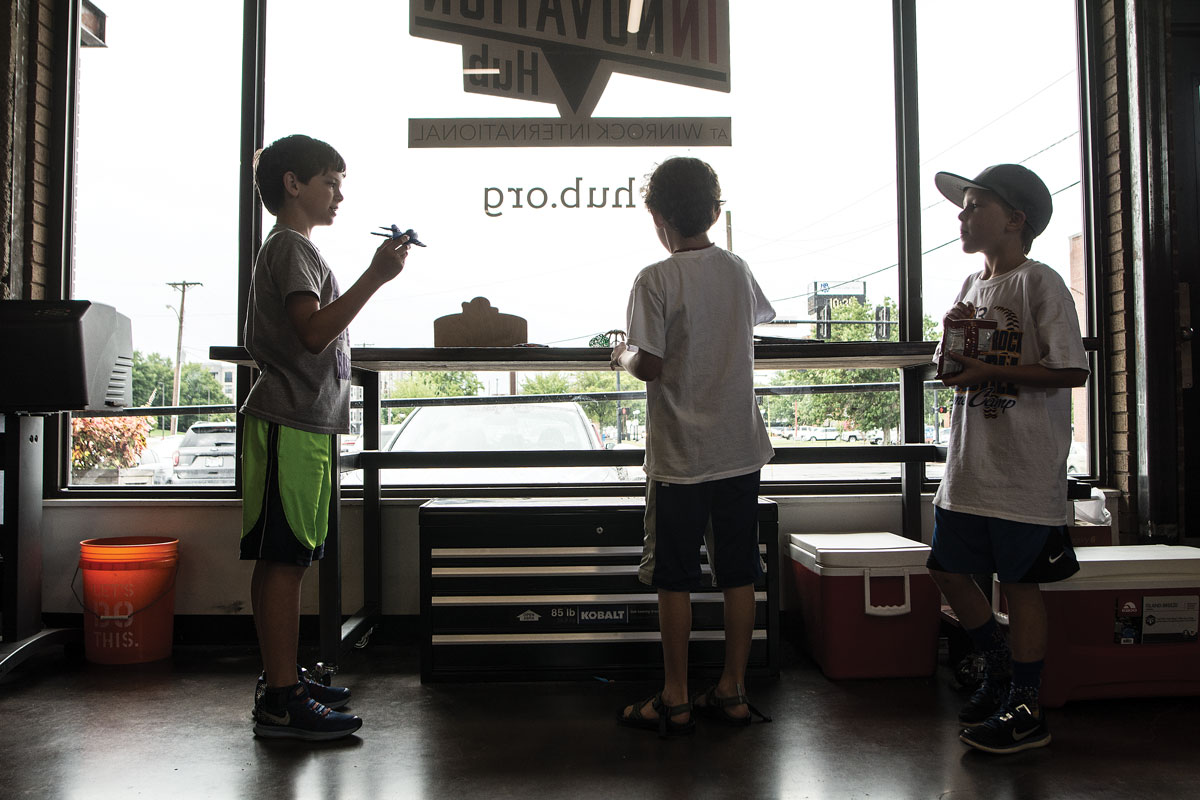 A Showpiece for Inventors and Entrepreneurs

[dropcap]T[/dropcap]ouring the Arkansas Regional Innovation Hub in North Little Rock’s Argenta District is very much like wandering through an oversized toy box.

In one corner rests a three-foot-wide Millennium Falcon scale model, constructed entirely of cardboard. In another, a row of 3-D printers stands in formation. Down a hallway, a large room sports row upon row of laptops for the day’s summer campers — grade-schoolers creating video game environments. Down that hallway, they’re wrapping up pottery class, around the corner from the T-shirt screen-printing lab.

By the time you encounter life-sized dinosaur models and random “Doctor Who” props you don’t think a thing about it.

But just as you start to feel like the shrunken Alice lost in Wonderland, you see gaggles of adult entrepreneurs touring the co-working space, sketching out a marketing plan at the coffee bar or taking in a vector workshop. Suddenly you realize that for all the toys it may have at its disposal, the Innovation Hub truly means business.

“We make a habit of iteration,” says Executive Director Joel Gordon. “What we started out as is not what we are now. I always tell people we sort of keep our knees bent so we can move in different directions.” 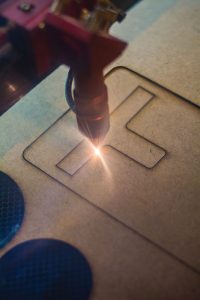 3-D printing and laser cutting at the hub allows a digital image to transform into a physical object.

It’s not accurate to say Arkansas Regional Innovation Hub sprouted from any one seed; rather, it’s grafted from a number of different ideas all rooted in the notion of providing the community a place to design, create and refine, be it a new business app or a confetti-and-flame-spitting unicorn.

The Hub’s 22,000-square-foot building, christened last year, already housed an art component when the maker elements and the entrepreneurial spaces (then called Silver Mine) moved in. State Rep. Warwick Sabin, former executive director for the hub, summed up the concept of the place as both a springboard and a magnet for native Arkansas talent.

“It can be a powerful thing for Arkansas to develop our talent locally and to maintain our talent,” he said at the organization’s first open house following a $2.5 million renovation. “There really isn’t any business or kind of idea that we cannot accommodate in some way.”

The Hub’s in-house programs and services speak to this by appealing to the broadest possible range of ages and interests.

“I hate the phrase ‘ecosystem’ because I think it’s completely overused, but I’m going to use it in this case,” Gordon said. “Our ecosystem — really the whole idea — is to create this bridge from young learners all the way up through careers.”

In that lies the Innovation Hub’s core strategy, to transform the fascinations of youth into the passion of a lifelong career by providing the tools and technology for every stage along that continuum, a three-step process Gordon coined as “inspiration, information and application,” of which application is often the derailer.

“I’m a kid of the ‘70s and ‘80s,” he said. “The ecosystem we used was museums and libraries and community spaces. Well, we lost community spaces somewhere along the line. Then in the last couple decades we’ve started to lose libraries, which are really in the midst of reinventing themselves right now into becoming media centers.”
He continued, “So, where do you go to apply your passion and your knowledge and do something? We really feel like what we’re doing on all levels is trying to be the resource center of the 21st century. It’s a new model.”

The spark of discovery can occur at any spot along the developmental continuum, from a youngster creating her first 3-D creation to an adult achieving proof of concept with a business product. Gordon says such discoveries are often accelerated communally, a decidedly counter-cultural concept in a society that increasingly pushes people into their own corners.

“Part of the problem is that we silo ourselves and we sort of say, ‘I’m an entrepreneur,’ ‘I’m an artist’ or ‘I’m a maker-engineer.’ Well, we’re all makers,” Gordon said. “The earliest stage of the idea is the ‘a-ha moment’ and that happens lots here.”

Gordon continued, “We help people with that phase and we help to introduce them to the right people to take them to the next phase. There’s so much knowledge here that if you have an idea and you want to make that idea real, there’s many channels that you can take to do that.”

The Arkansas Regional Innovation Hub continues to evolve with the growth of its members, each of whom pays $70 per month as an individual, $120 as a three-person team or $50 for senior or after-school memberships. Classes and workshops are priced individually and are either free or offered at substantial discounts to members.

“We have a really incredible entrepreneurial community in Arkansas that is really focused on different stages of that business acceleration and the incubation of businesses,” Gordon said. “But what I think our niche really is, our real success, is we have people who come to us and they have really solid ideas and they want to build it. It’s one thing to have a great idea, but it’s just that, an idea, until it becomes a thing.”