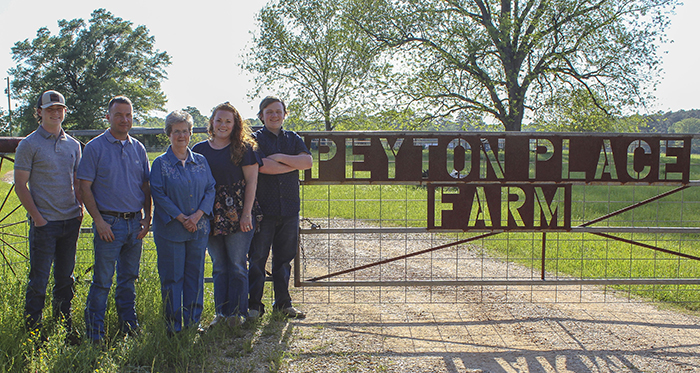 Rocky Lindsey, DVM, is an associate professor of animal science at the University of Arkansas at Monticello (UAM). He and his wife, Alicia, and their two sons, Isaac and Jonah, were recently named as the Drew County Farm Family of the Year for sustainable practices on their generative farm that is used to grow hay, sheep and goats.

Pasture-raised animals are favored by many consumers who consider them healthier to eat because of high levels of beneficial omega fatty acids. And, increasingly, people who care about animal welfare like the idea of consuming animals who have lived a natural life outside in the sunshine instead of being raised inside. Pastured animals benefit the environment by producing manure that provides natural fertilizer while improving the organic matter in the soil. That helps make pastures more productive and drought-resistant while preventing runoff that can pollute nearby bodies of water.

“Before he died, my father had been sick for a while, and the pastureland was unimproved in many places,” Lindsey says. “The farm was in pretty bad shape. I had a crash course in how to make the farm cash flow. We started with selling hay. Then I got cattle and sheep so I could improve our pasture. We also had 40 acres of mature pine that we put goats on to clear the underbrush.”

Lindsey says there are advantages and disadvantages between sheep and cattle. Sheep are their own species. They act a little differently, require a different diet and more care.

“You will be more hands-on with sheep than cattle, but they are an easier animal to handle because of their size,” Lindsey says. “In our hot, humid climate, sheep have parasite issues, and dewormers don’t work anymore. You have to choose breeds of sheep and individuals that are resistant. We raise Katahdin sheep, which are a good breed for parasite resistance. Even within that breed, I take care to breed sheep that are more resistant to parasites. Parasites are something that can make or break a farm in our area.”

Another issue due to the humid, hot climate is that sheep can be prone to malignant foot rot. Their hooves need to be trimmed. You also have to be careful about not feeding them anything moldy or rotten.

“Both of those conditions you need to stay ahead of,” Lindsey says. 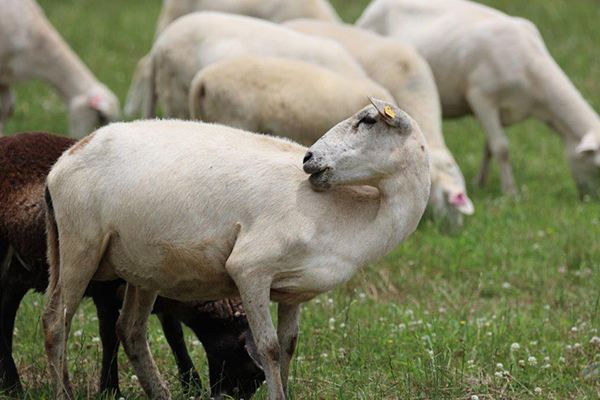 Katahdin sheep graze one of the pastures located on the Drew Counrty Farm Family of the Year.

Buttercups are beautiful yellow spring flowers that can be a major pest in pastures. Cattle don’t like buttercups, but sheep do. In pastures where sheep have been, there are no buttercups nor a lot of other weeds that sheep like to eat, which eliminates the need for spraying herbicides.

Alice Lindsey remembers being in the fields with cotton pickers when she was a toddler.

“The thing I find fascinating about all of this is that Rocky is the third generation to use the same piece of property,” says Alice, who teaches hospitality courses at UAM. “It’s been interesting to watch it evolve. Every generation has used it in a different way. Cattle and hay are the common denominators for the three generations. Rocky put in place cattle and sheep grazing the same land but eating different plants. By using the sheep, we were able to eliminate chemicals. There comes your sustainable part, for sure.”

The sheep actually increase the production of hay. 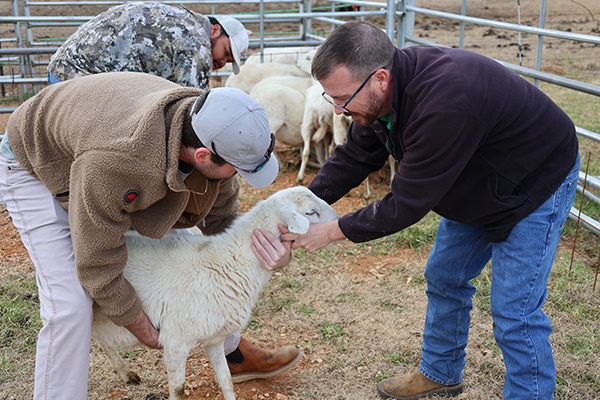 “Sheep prefer a forb, plants that cows don’t like,” he says. “Sheep are good for hay production, and it allows us to be able to sell hay grown with no herbicides or commercial fertilizers, which is important for people who want all-natural hay for their animals. We market locally primarily to small operations, people who will come for 10 or 15 bales of hay.”

Sheep require proper fencing. They can push right through barbed wire or even electric fences because of their wool. Another issue can be predator control. Seven of their sheep were killed by a neighbor’s dog a year ago. The Lindseys have guardian dogs but, in this case, the guard dog didn’t do its job. They had to get another guard dog.

The Lindseys also have a donkey, and donkeys can sometimes be used as guardian animals. But they have found their donkey will kick the sheep to compete for food. 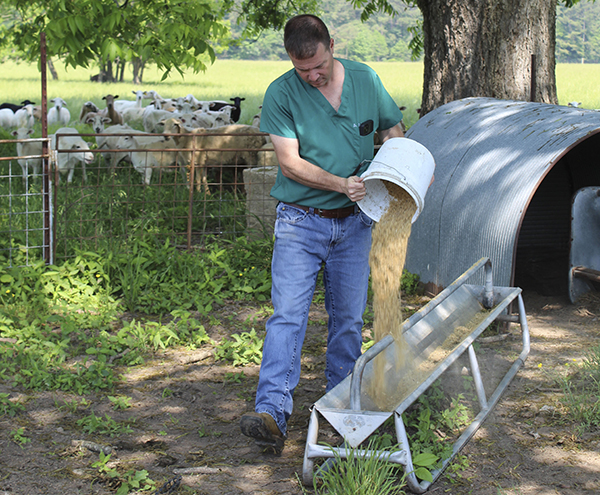 The Lindseys tend to their pasture-raised sheep. Work on the Peyton Place Farm is a family-affair for the Lindseys, as they feed, herd and watch after their animals.

“When I’m feeding sheep in the wintertime, I can’t have the donkey with them,” Lindsey says. “I don’t completely trust him. If you are going to have a sheep operation, you have to have guardian dogs.”

They have 70 sheep on 30 acres of pasture. Their little hooves act like little aerators tilling and improving the soil. Lindsey could grow more sheep on that amount of land, but is being selective about retaining low-maintenance sheep.

The benefits of pasture-raised animals include creating soil that is rich in nutrients and retains moisture.

“We don’t have runoff,” Lindsey said in mid-October. “Our pasture is as green as green can be, and that is not normal right now because we are in a severe drought. The way we farm protects from drought.” 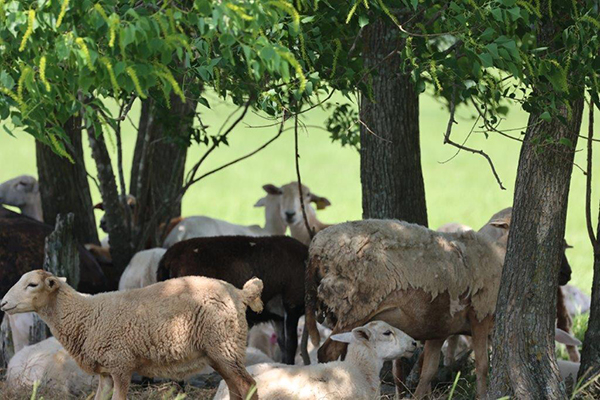 Katahdin sheep stand together in the pasture at the Lindsey farm.

In the past, they have grown cattle on ryegrass in the winter. They sold their herd this past winter and are currently in a hold pattern with cattle.

One of the biggest problems impacting their pastures — a problem on farms, parks and at homes across the state — is wild hogs. The Lindseys work with a state program that has helped trap about 200 wild hogs in recent years.

“The state program is very much needed and has helped a lot,” Lindsey says. “We have about 20 hogs right now we are trying to catch. Hogs destroy soil health. They rut in the soil and greatly damage fields. Our pasture abuts a big creek bottom that is a paradise for hogs. They come out into our pasture at night. It costs us thousands from lost production and from damage to equipment driving over areas they have torn up. There is a lot of water and soil runoff in areas they have damaged.”

The state has cameras out and baits the pigs into pens. Lindsey has a list of people he calls when they trap the pigs. While they have donated meat to many, if you trap 20 pigs in one night, it is hard to get enough people to take an undressed hog. There is not a meat processor who will take them; people have to process the pork themselves. Although they would rather see the meat used, sometimes the Lindseys have to dispose of the hogs by burying them. 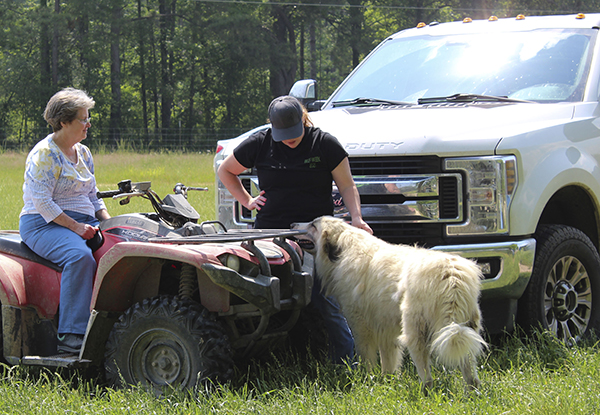 Hunters don’t help that much. Some hunters will castrate boars, which are not good to eat, and then release them so they can be hunted again. That is illegal, but it happens. About a dozen castrated hogs have been caught in traps at Peyton Place Farms. With no libido, the castrated boars only care about eating. And hogs reproduce rapidly.

“Hogs are just very prolific,” Lindsey says. “At six months of age, they can have a litter of 10 offspring. Then in another six months, all the offspring can breed.”

The Lindseys raise goats on a separate 40-acre farm planted as a pine plantation. There is a five-strand electric fence around the whole place and two guard dogs there. They initially put 40 goats out there. By the end of summer, they had eaten all the underbrush. Now they keep 10 to 12 goats to keep the place cleaned up. In the next year or two, they plan to harvest some of the trees and create pasture for more goats or sheep. 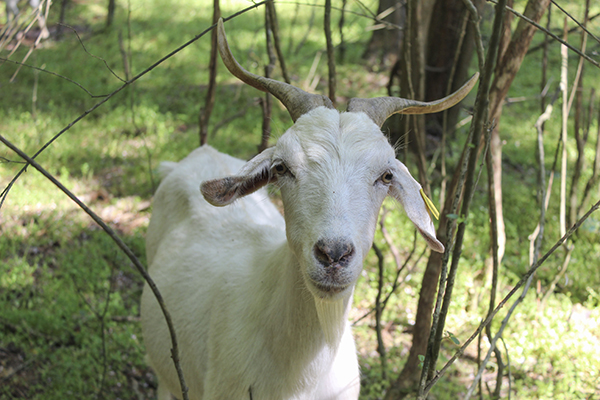 “My wife feeds the goats and the guard dogs,” Lindsey says. “Goats are more difficult to raise than sheep. They have more parasite issues. You have to select for those that do well, just like with sheep. The Kiko breed does pretty well and is the easiest to find in our area.”

They sell goat meat or lamb primarily to immigrants from Hispanic, Middle Eastern, African and Asian countries. Those countries include many places where there is no refrigeration. A small ruminant can feed a village. When a cow is processed, a lot goes to waste. 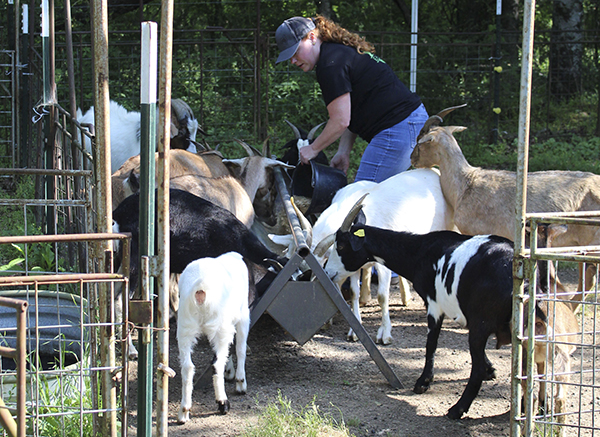 “Goat and lamb are their preferred sources of protein,” Lindsey says. “Little marketing takes place. The customers come to you. The market is predictably strong around Muslim holidays and Easter.”

Probably one of the biggest mistakes Lindsey has made is buying used equipment that needs a lot of repairs.

“I’m not a mechanic,” he says. “When things break down, it is usually at an inconvenient time. And it is a big mistake not having infrastructure in place. You have to have proper fencing and predator control. Have a fence and plan in place to protect them before you buy them.”