During July, the New Gallery is hosting a solo exhibition by Dylan Mortimer, entitled “Can’t Hold Me Down,” which is comprised of mixed media artworks. The exhibit will run from July 5 – July 27. The opening reception will be held on July 5 from 5-8 pm. An additional viewing will be held during SoMA After Dark on July 12 from 5 pm – 8 pm. 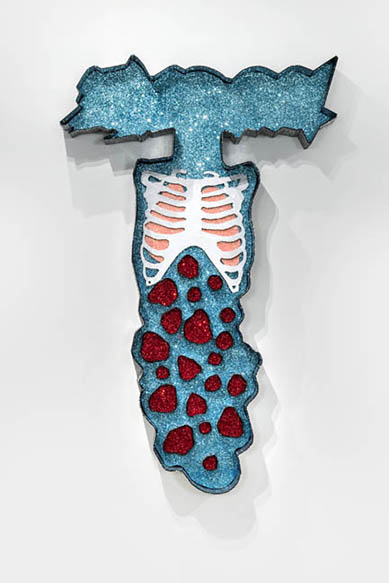 The lung transplants have not only given him a new life but an inspiration for his art.  Reflected in his works, Mortimer uses his art as a tool to help those who suffer through the daily struggles that come with Cystic Fibrosis. Incorporating his life theme of pain, healing, and hope into his art, Mortimer uses glitter as a material of his works to beautify the ugliness involved with cystic fibrosis. Mortimer hopes that those who see his art can feel the tension between pain and healing, while also being able to visualize his journey of reflection and finding hope of what it feels like to be healed and well.  Committed to Life, he encourages others to reflect on their circumstances to push through the struggle to overcome adversity and see the beauty in surprising ways.

Mortimer’s unique art has been exhibited in galleries and museums across the U.S. Some of his recent painting and collages often include anatomical images such as lungs, cells, bronchial trees, and scars, which are all covered in a hefty layer of glitter.

He graduated with a BFA from Kansas City Art Institute and an MFA from the School of Visual Arts in New York. He has created public art installations in several major cities including New York, Chicago, Baltimore, Kansas City, MO and Denver, CO. His exhibition history includes shows at Columbia University, The Longwood Arts Gallery in the Bronx, the Dumbo Arts Center, PS 122 Gallery in New York, the Kansas City Jewish Museum, the Nerman Museum in Overland Park, KS, and Haw Contemporary in Kansas City, MO. 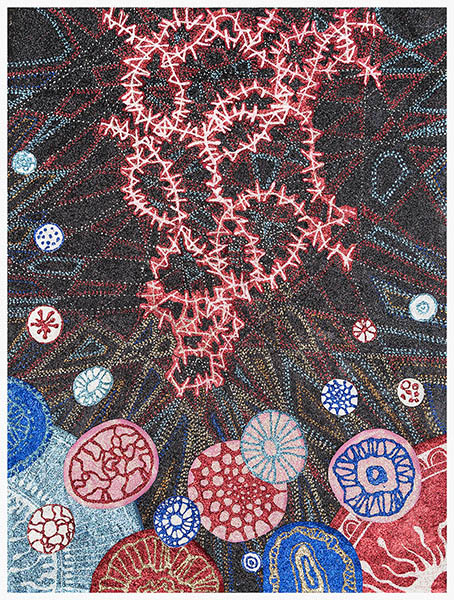 Mortimer’s solo exhibit “Can’t Hold Me Down” includes recent mixed media collages in a range of sizes and will be on display at The New Gallery from July 5 – July 27, 2019. In addition to the opening reception on July 5. There is no charge to view the exhibit.

Located at 1619 Scott Street in Little Rock, The New Gallery is currently open by appointment only.  Contact [email protected] to set up an appointment.