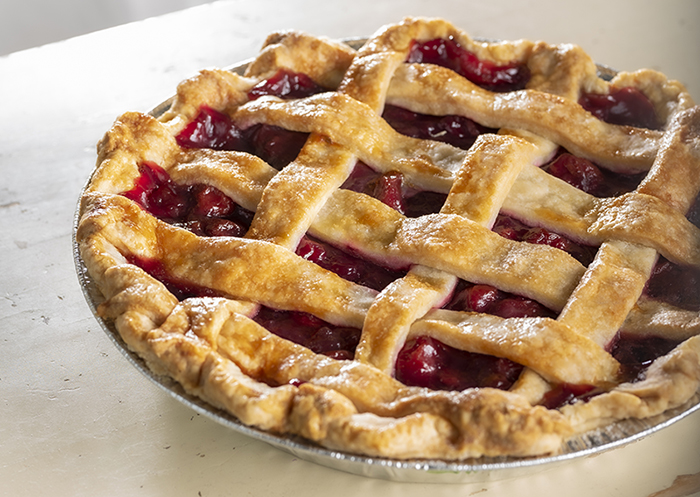 We have a two-pronged tradition at our house when it comes to holiday meals, especially Thanksgiving. Everyone at the table requests a dish and must prepare — or help to prepare — at least one dish, be it the one they requested or otherwise. My wife and I love spending the day in the kitchen as ringmasters for the whole process, and we orchestrate, to one degree or another, pretty much everything. But the one I claim under our family’s great commission is the pumpkin pie.

This says more about the pie and its place of honor in the American dessert lexicon than it does me as a cook, believe me. But I’m still not leaving it to whatever amateurs are joining us in any given year. Thankfully, my wife is a wizard in the kitchen and her divine pie crust is my failsafe. Y’all should drop by.

Of all the things that finish a meal, nothing blesses the occasion like a slice of pie peeking out from under a golden crust, crumble or crown of pecans. Pies are kind of like a warm family album — you can tell a lot about a household’s heritage by what finishes the meal. Growing up in the Midwest, that meant a lot of fruit pies stuffed with apples, blueberries or cherries that were probably grown in the backyard. When I moved to the South, the pecan, possum and Mississippi Mud varieties told similar stories.

Steve Lewandowski, who co-owns Blue Cake Company with his wife Jan, is something of a dessert double agent. Despite having built one of the city’s premier cake bakeries, his roots, and his heart, lies in pies.

“I feel like [pie] is lined up with the comfort foods more so than anything else,” he says. “You see grandmothers baking pies as a seasonal thing where you’re getting fruits that are in season, and they end up, a lot of times, in pies. I think the fact that it’s a comfort food is probably one of the most important aspects of a pie, as far as making you feel good about it.” 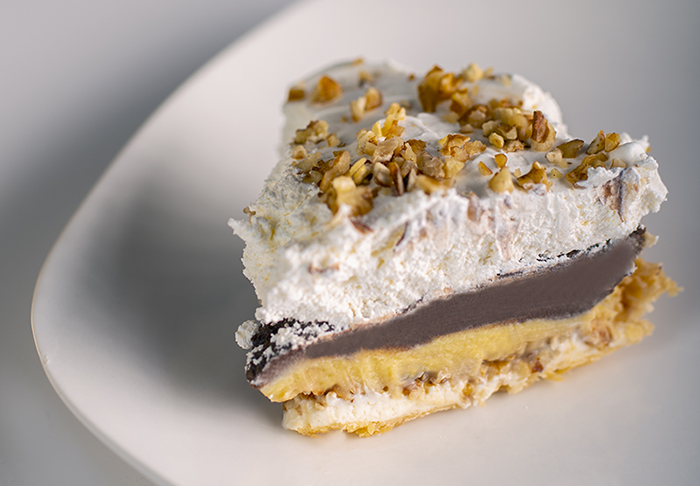 The Lewandowskis demonstrated the depth of their pie devotion by purchasing Little Rock’s Honey Pies, one of the most-decorated pie shops in Arkansas, on September 1. The new Blue Cake with Honey Pies will carry the shop’s beloved recipes as before, all rooted in the same fundamental elements that are the hallmark of good pie.

“To me, it’s about the crust — how the crust holds up, what you put in it, whether it’s a nut crust or butter crust or shortening crust, graham cracker, Oreo,” says Steve, who lists key lime and lemon icebox as among his favorite varieties. “To me, the crust is where it starts. It’s what’s going to hold all the goodness that you have, the stuff we put in there.

“The crusts we’re doing now are mostly butter crusts. Sometimes people will put in only shortening, which is a little bit lighter, flakier crust, but the flavor comes from the butter. The one we’re working with right now, which is absolutely fabulous, is butter-only, no shortening in it.”

You can find a lot online about how there are pie people and cake people and a supposed debate over which dessert reigns. I find this silly because, for 1, we have enough to bicker about these days and 2, the evidence for pie is so stacked, it doesn’t seem like much of a fight. 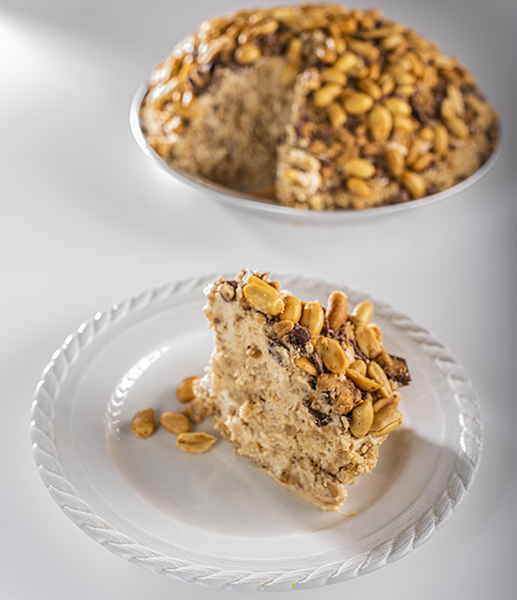 But just in case you are one of those who still thought there was a debate over this, there is not. From the moment they are born the differences are obvious: Take a pie from the oven, take a cake from the oven and what have you got? One, a fully-formed dessert begging for little more than a dollop of ice cream; the other, a slab of carbs demanding an additional two hours’ labor to cool, stack and frost.

Seriously, there are labor-intensive cakes out there so intricate and so lovely it makes you feel bad to cut them open. And a dessert that makes you feel bad is too confusing to enjoy. Pie can be pretty, but pie is at its heart sturdy, blue-collar, unfussy. Do you think the people who built this nation, walked the high steel, drove America westward to the Pacific sat down at midday and cracked open their dented lunch pails for some frilly petit fours? Come on.

Other desserts all wish they were pie (I’m looking at you, cobbler), and cake knows it. Heck, even non-dessert dishes want to be part of the club. There is no turkey pot cake or pizza torte or red velvet quiche; they all identify as pies. Cake has no such minions, save for a couple of unfortunate specimens floating around the internet comprised of two or more giant hamburger layers “frosted’ with mashed potatoes or tomato paste. Look it up and if you want to count that, cake crowd, well okay — but you’re not fooling anybody.

And don’t throw up that argument claiming cheesecake as cake. It’s got a crust; it’s got a filling; it’s a sweet cheese pie. I can’t be the only one who sees the logic here.

Look, I’m not asking for cake to be deported, but let’s all stop pretending that it’s better than pie or more important to the soul of our nation. Ever hear someone say, “as American as apple cake?” I didn’t think so. In fact, show me a July 4 barbecue that doesn’t serve apple pie and I’ll show you the sleeper cells in your neighborhood. 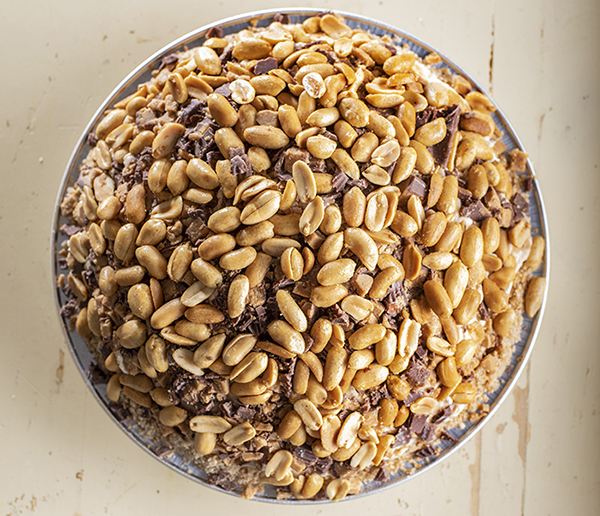 But don’t take my word for it — ask our hall of presidents. According to a 2016 article from NPR, of those who served as president (through President Obama) 17 listed cake as their favorite dessert while 11 favored pie. However, a closer look reveals some chicanery in the scoring. George Washington, James Madison and Harry S. Truman claimed cakes of their wives’ creation, and Jimmy Carter favored a selection from his childhood. Giving the thumbs-up to a dessert to appease your spouse or your momma, while advisable, does not certify its superiority.

And, Zachary Taylor was inexplicably listed in the cake camp for his love of sweet fried rice dumplings. Admittedly not pie, but it’s not cake, either.

So throw out the whipped mama’s boys and put Taylor in the “other” category where he belongs, and it’s nearly a dead heat between the cakers, who include Richard Nixon, and true-blue pie patriots, who boast Abraham Lincoln. Well, who are you going to believe? I might also add Franklin D. Roosevelt and Lyndon B. Johnson listed fruitcake as their favorite cake. If that’s the best cake-eaters can do, you can have it.

Pie is a beacon — there are just no two ways about it — and the places it beckons us always feel a little like home. That’s why we get so excited, especially in Arkansas, to read about some little ramshackle bend in the road that’s cranking out big meringue, decadent chocolate or little fried flavor bombs. A good pie kitchen, like good BBQ, generates more buzz in this state than the Fouke Monster walking down I-30 with an ivory-billed woodpecker on its head. And for good reason.

Cheer up, cake; you’ll always have a place at our birthdays, weddings, retirement soirees and the like. But where cake needs these events to truly shine, with pie, all you need is a fork and a friend. And, if you’re running short, maybe just the fork. 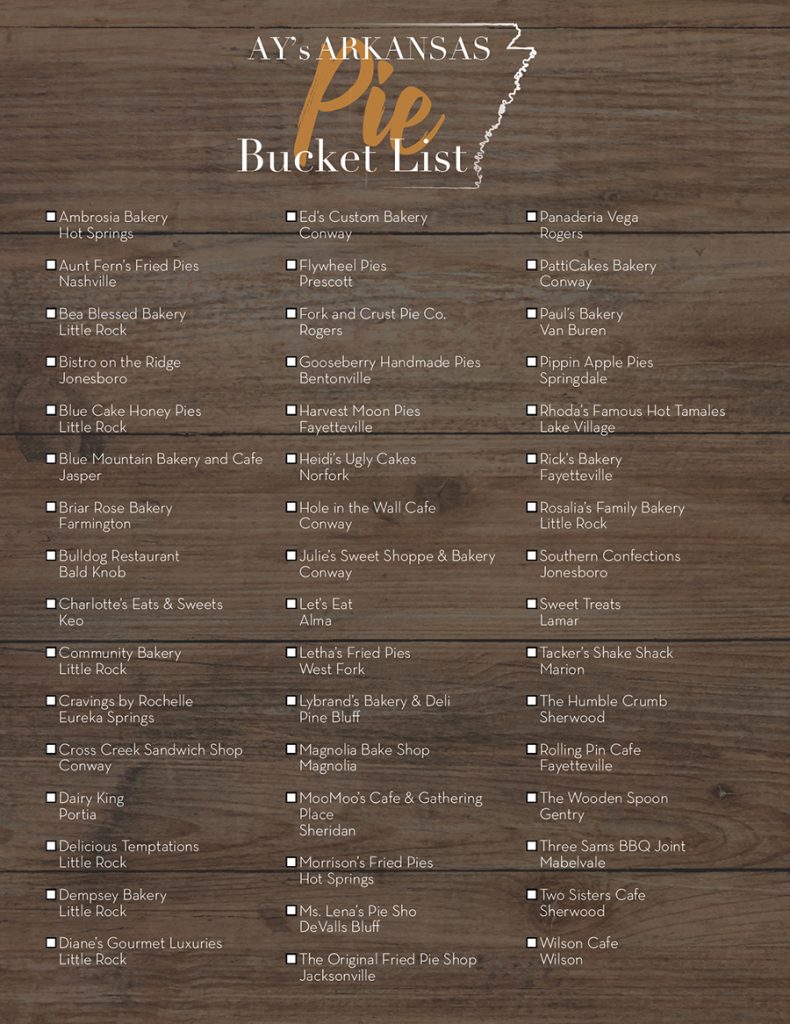