Eat My Catfish is Opening a Fayetteville Location 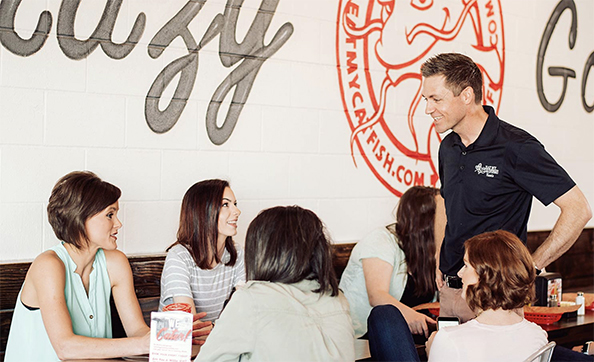 A popular central Arkansas restaurant is moving to Northwest Arkansas.

Eat My Catfish is adding a new location in Fayetteville, its first restaurant in Northwest Arkansas and its fifth location overall. Currently, Eat My Catfish operates locations in Benton, Conway, Little Rock and North Little Rock.

Fayetteville’s Eat My Catfish will be located at 32 W. Joyce Blvd. in Joyce Plaza.

“We are very excited about our next location and the impact it will have on the Fayetteville community,” Travis Hester, President of EatMyCatfish.com, said.

Eat My Catfish was also recently named to AY Magazine’s Catfish Bucket List as one of the best spots in the state to get catfish.

Hester founded Eat My Catfish, which started life as a food truck in Benton, in 2008. Four years later, he opened the restaurant’s first brick-and-mortar location across the street from where the food truck was originally parked.

T.J. Lefler, vice president, of Cushman & Wakefield/Sage Partners, and Stephanie Farmer of Sage Partners collaborated with Eat My Catfish to on the Fayetteville location.

“Eat My Catfish is an outstanding establishment, and we are really excited to have them in Northwest Arkansas. We are so pleased to work with founder, Travis Hester, and his team to expand Eat My Catfish in order to bring delicious food, and the environment of nostalgia he has created to others,” Lefler said.

Image courtesy of Eat My Catfish

Chow Down on Doughnuts! Where to Find Doughnuts in Arkansas
June 5, 2020

The Long Punt From Australia to Arkadelphia
June 5, 2020

Crystal Bridges, The Momentary to Reopen on June 10
June 4, 2020
Go to Top
Never Miss An Issue!