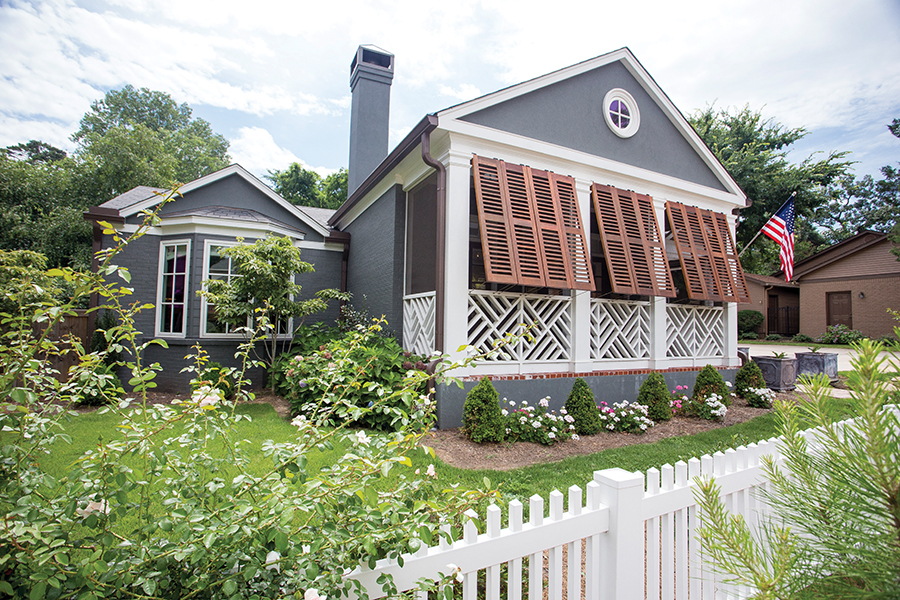 By Angela E. Thomas | Photography by Janet Warlick
Phillip and Paula Schmidt reared their family of three sons in a large west Little Rock home — understandably, they needed the space. Now that the boys are living independently, the Schmidts decided to downsize and move into a home that once belonged to Paula’s mother. However, the home’s design needed to be modified, so they called upon designer Garry Mertins. Mertins, who grew up working alongside his engineer father, recommended knocking down a few walls, changing the entrance and repurposing several areas, all while maintaining the original footprint. Mertins says this home was a “fun remodel.”
“The original space was very choppy,” he says. “We moved walls and reworked the space so the space is divided but still open. We added windows and took out a garage bay to create a guest quarters.”
The result is a stylish, tranquil space ideal for a laid-back lifestyle.

“We’re not formal people,” Phillip Schmidt said. “We like to have company over, and we like to travel. New Orleans is our favorite city and we love the beach. So we love the French doors and transoms and the louvered doors and shutters — they’re an ode to our two favorite destinations.”

He and his wife love the transformation.
“The Key Wet shutters across the front of the screened porch have wide louvers, which allows occupants to still have a view and a breeze,” Mertins said.

“The kitchen is a study in efficiency. While it has two dishdrawers, an icemaker, wine cooler and large refrigerator, these machines do not dominate the room. “Because the kitchen is exposed to the dining room, we placed the appliances low or covered them, so you don’t walk in and the first thing you see is stainless steel,” Mertins says.
A pair of oculus windows, along with a short bay window, brings light into the kitchen and its sitting nook. 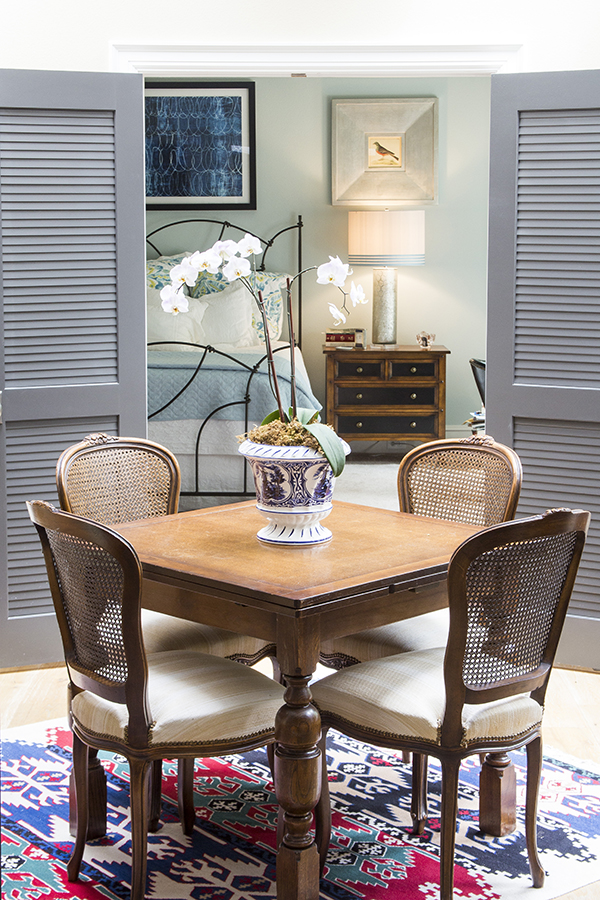 The Schmidts’ game table serves as a buffet or bar and affords them additional seating when they entertain. The area is a transition space with entrances to the master and guest quarters and an exit to the rear deck. Again, Mertins’ gift for symmetry is showcased as columns separate the room, marked on either side by gray louvered doors.

One way in which Mertins created continuity is through symmetry. Furnishing the room with a mixture of existing accent pieces, collections and keepsakes and new furniture with colorful prints is, according to Mertins, a good way to add an Old World feel without being too fussy or formal. “Because Phillip and Paula actually live in this space, it was important this room works well — for instance, the chairs swivel so they can view television or have a conversation with someone seated,” Mertins said. “Tucking the television into the bookcase keeps it from becoming the focal point of the room.”

Skylights allow sunlight and moonlight to stream into the room and understated track lighting along the exposed beams has been strategically placed to bathe the living room in soft light when needed.

The master bath is illustrative of Mertins’ exemplary modern styling. The rectangular tub in the room’s center brings a dramatic flair. “By placing the tub here, we maximize the space and bring an Old World element in the room. I had two chests of drawers modified to include a sink and still have storage,” he says.
Silver-blue travertine floors help create a cool color scheme. The water closet and shower are situated in an alcove and separated by a glass wall; a pair of glass doors allows entrance and exit. Never one to forget detail, Mertins had the space tiled in a herringbone pattern.