These three words describe the approach of the team behind Komodo, an upscale Asian fusion restaurant in Rogers.

“He was the chef there, and I was a manager, and we worked there for five years together,” Combellack recalls. “He went on to go live in China so he has a really extensive background with Asian cuisine. I ended up moving here two years ago, my wife and I. We thought there was definitely a niche for this sort of elevated Asian food. I knew Ryan had just returned from overseas and reached out and said, ‘I want to open a restaurant.’” 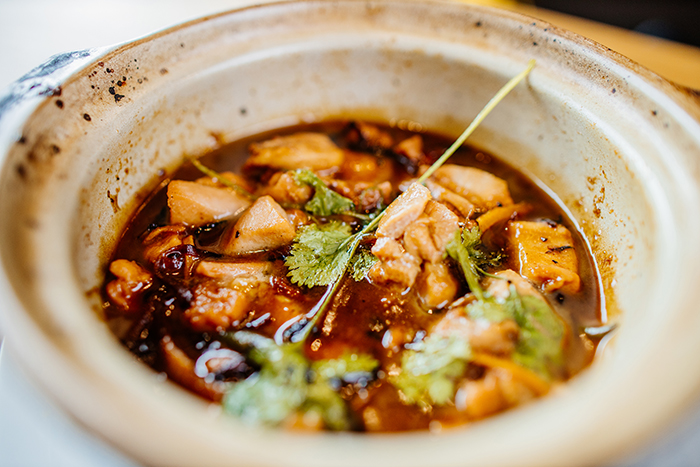 Chef Brown loves fishing and is an outdoor enthusiast so (of course) he signed on to a “Natural State” relocation.

Komodo opened on June 29, 2018, and the cuisine is a modern twist on classic Vietnamese, Thai and Chinese dishes. The portions are large and meant to be shared among a table. Freshness is key, and they source local ingredients as much as possible.

“We don’t utilize any heat lamps. Once the food is ready we bring it to the table, fresh. [Sharable portions] give everyone the opportunity to sample different flavors,” Combellack says.

Combellack’s wife has relatives in the area which is how he became familiar with Northwest Arkansas. 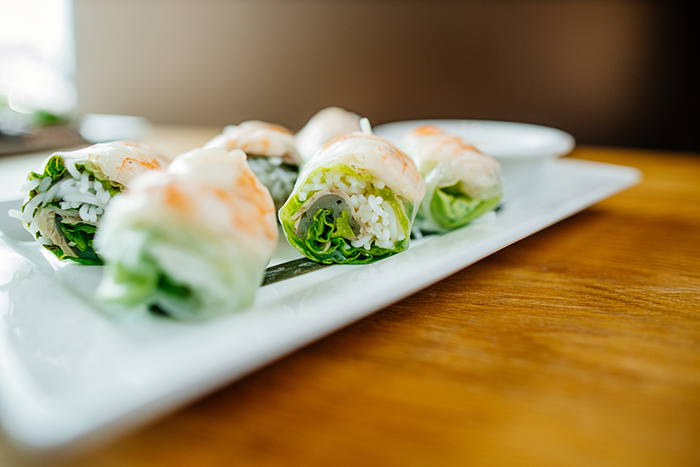 “We saw the food industry was evolving, and we were starting a family, and it seemed like a great place to do those things. While I would love to start a business in California, it’s a bit pricey. The food we serve is a scratch kitchen. We make everything in house. We do dim sum,” he says.

Their attention to detail and devotion to fresh ingredients carries over to the full bar where all the cocktails are crafted with fresh-squeezed juices; no mixers are used. Fifteen local beers and ciders are also available on draft, giving customers a true taste of Arkansas.

The extensive wine list was curated by Combellack who focused on wines that would pair well with their dishes. There are some familiar labels and small-batch boutique wineries you won’t find on other regional restaurant menus. He is passionate about small-batch wineries. 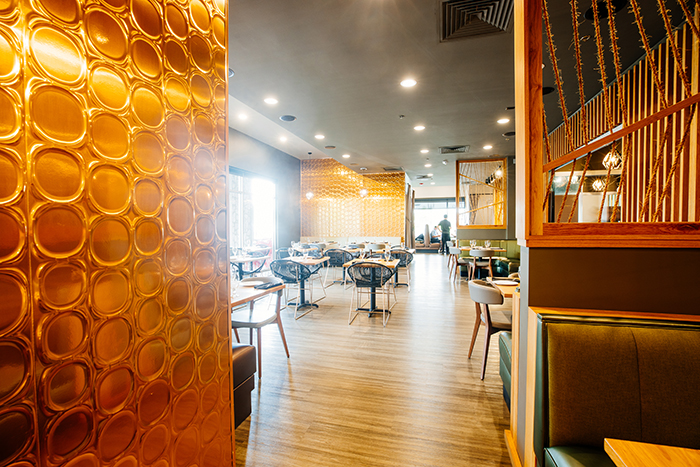 The interior is warm and sleek with copper accents, neutral tones and locally fabricated screens made out of wood and rope that help partition off areas and create a more intimate atmosphere. Wood and metal elements throughout give the restaurant a natural feel. SP Interiors of Fayetteville was the interior designer.

“The common theme of today’s restaurants are big wide open restaurants which are loud,” Combellack says. “We wanted to break it up a little bit; make it a more intimate setting. We have private booths [and] private rooms.”

There’s also a large covered patio and private event spaces that can seat up to 60 people — perfect for corporate holiday parties, special events or rehearsal dinners.

The chef’s dinners and cooking classes, which have very limited seating, are very popular and sell out quickly. Those are advertised on their Facebook page.

For first time customers, Combellack suggests trying the two best-selling dishes, both inspired by Vietnam: Caramelized Shrimp and Shaking Beef made with cubed filet mignon cooked in a wok with tomatoes and onions. The bento box lunches are another top seller.

“Customers love it,” Combellack boasts. “It’s unlike anything in the area. You are not going to come here and get anything like you would at P.F. Chang’s. It’s very unique. Sometimes people look at the menu and are not familiar with things on there but once they try it, they love it and are hooked.”

While Komodo is a standout in Arkansas, there are a number of other delicious Asian fusion restaurants around the state.

Kiyen’s in Little Rock is a special spot serving fabulous fusion fare. The chef has a background in biological oceanography so he selects only the freshest fish for his customers. The presentation is of utmost importance, so the dishes are as beautiful as they are delicious. There’s a bounty of healthy fare including nine salad options. Order sushi, hibachi, Korean barbecue or pick something off the Fusion menu. There’s a nice selection of wine and other libations. 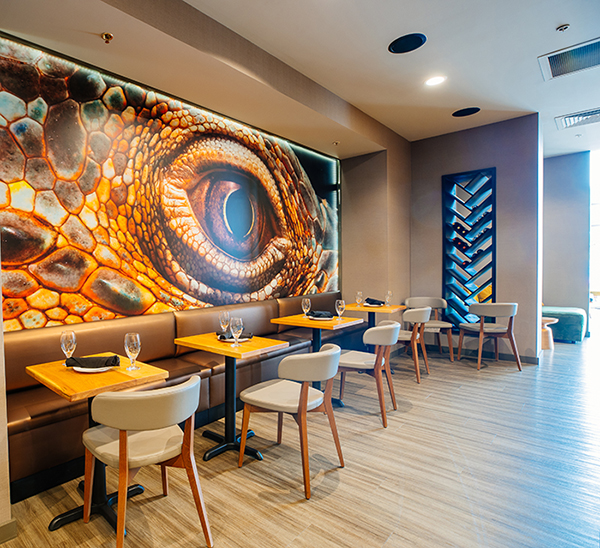 Ozark’s Thai Steakhouse serves up big portions of classic Thai dishes such as red or green curries and Japanese sushi. The steak garners rave reviews. Vegetarians should not be discouraged by the name because there are several options for a meatless diet. Nothing fancy, but delicious, all the same.

Sai Thai and Japanese Steakhouse in Jonesboro is another restaurant offering various Asian fusion dishes, specifically Thai food and a Japanese hibachi menu where you can savor everything from filet mignon to scallops and shrimp. Thai dishes include ginger chicken, a variety of curries and the popular spring rolls stuffed with ground chicken, bean threads and vegetables, all deep-fried and served with sweet and sour dipping sauce. You can also customize the “heat” of your dishes.

Hunan Palace in “America’s First Resort,” Hot Springs, is located in a strip mall, but don’t let that turn you off. While the décor may be lacking, the Chinese food boasts rave reviews and has everything from classic food to playful fusion dishes such as the cheesesteak egg roll. For appetizers, the Pu Pu platter is the way to go, as it features an assortment of nibbles. Try the Singapore Mei Fun, which is thin rice curry-flavored noodles with shrimp, chicken and pork. The menu is as extensive as the flavors on your tastebuds.

The Asian House in Bryant offers a little bit of everything — Thai, Chinese and Japanese specialties. You can order a sushi roll, enjoy a seaweed or a green papaya salad, savor a variety of curries and find more traditional fare such as General Tso’s chicken and Lo Mein noodles.

Tiny Thai Place of Monticello offers authentic Thai dishes that are cooked to order. Try the Aloha Fried Rice which has yellow curry flavors mixed with cashews, raisins, pineapples, carrots and bell peppers with your choice of meat. Get a taste of authentic Thai street food with the Kai Jeow, a light and fluffy Thai stuffed egg with mushrooms, carrots, tomatoes, cilantro and green onions served over steamed rice. If someone in your party doesn’t like Asian food, don’t fret, because the Chicken Parmesan is available for less adventurous eaters.

Bulgogi Korean BBQ is a new name to the game of Asian fusion in Conway, and is already making waves in the “City of Colleges.” They feature staples such as egg rolls, spring rolls and rice bowls with steamed or fried rice for traditionalists. But their flare is what has drawn in the crowds. Like the Korean Style Street Tacos served with either beef, spicy pork or chicken. And their Korean Cheesesteak Sandwich, with the same meat options, that is sure to make patrons forget all about Philadelphia.