One country music star is going to be hitting North Little Rock “like a wrecking ball” in October.

Eric Church is bringing his Double Down Tour to Verizon Arena on Friday, October 25. Church has expanded his tour with 13 additional shows in eight cities, including Little Rock.

“I don’t want to be two months from the end of this thing – so we’re going to play a little more… I can’t thank you enough for what this is and what I’m seeing every night. I appreciate everybody giving me everything they’ve got and I look forward to seeing you on the road!,” Church says. 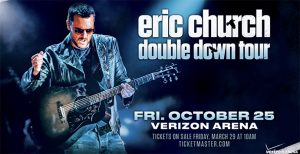 This is going to be a fantastic chance to see Church let loose with some of the music that has propelled him to superstardom. Each night, Church performs a unique set-list and tailors the songs to the city he’s in. So you never know what you’re going to see and it’s a special performance each time!

Make sure to download the Eric Church Official App to be able to access a special pre-sale for tickets.

Regular ticket sales begin on Friday, March 29, at 10 a.m. Get your tickets at Ticketmaster.com. 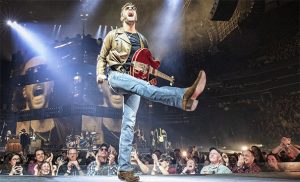 So, dust those boots off and get ready to let loose in October.

Images courtesy of the artist and Verizon Arena