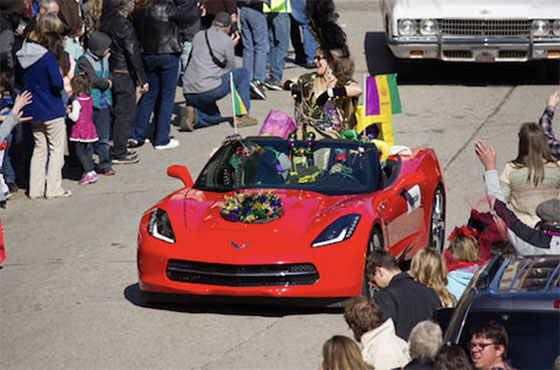 by Juliana Goodwin
Mardi Gras in Eureka Springs started as a small affair, but it has transformed into big fun.
In 2006, Dan Ellis, a New Orleans native who moved to Eureka Springs after being displaced by Hurricane Katrina, longed for Mardi Gras celebrations back home. He founded the “Krewe of Krazo,” which is Ozark spelled backward, and organized a miniscule parade the first year. 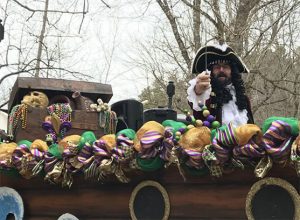 A pirate gestures from his float. 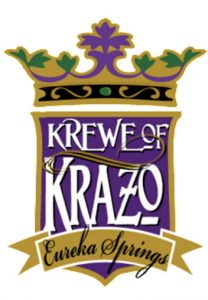 The Krewe of Krazo logo

Today, there are 14 celebrations spread over two months leading up to “Eureka Gras” –  and it grows every year.
Every event sells out, says Mary Popovac, captain of the Krewe of Krazo and a native of Baton Rouge, La.
If you’re not familiar with the lingo, a Krewe is a group or organization that hosts a Mardi Gras ball, rides on a parade float and participates in social events throughout carnival season. A krewe elects a royal court who help uphold the traditions of Mardi Gras.
In Louisiana, Mardi Gras is an official holiday held on Fat Tuesday (March 5 this year), but the main Eureka Springs parade is held the Saturday before Fat Tuesday(March 2 this year) because it’s not a holiday in Arkansas so this enables more people to attend.
And throngs do attend.
The Krewe of Krazo tosses 50,000 beads per parade.
“This does not count the Royal Court and other participants and Krewes in parades who also throw beads,” Popovac says. “The day parade has increased tremendously. It has extended another three blocks because of increased attendance. All the balconies are full. There are people everywhere.”
The celebration attracts people from Missouri, Oklahoma, Kansas, Texas, Mississippi and sometimes Tennessee (ticket sales to the balls reflect that attendance).
Leading the parade is the Krewe of Barkus (dogs in costume), which is always a big hit, she says. 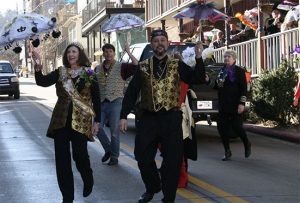 People come from all over to enjoy Mardi Gras in Eureka Springs!

This year’s theme is Comic Book/Cartoon Characters.
“I can’t wait until the Jokers Masquerade Ball to see all the creative costumes. I am amazed every year. Just when I think I’ve seen it all, I am always pleasantly surprised,” she says.
All the hoopla has transformed the winter tourism industry in this community.
“It landed right smack in the middle of winter when at that time Eureka Springs closed for three months. It never closed since. Mardi Gras awakened the city to be  year-round tourist destination,” says Ellis.
Hotels help sponsor the festivities; merchants decorate their shops; and the community gets involved.
In 2011, they added a night parade, which will be held Feb. 23 this year, to give spectators a taste of both styles of parades in New Orleans.
“It’s funny how beads, umbrellas and boas can change your life,” says Popovac. “I have seen so many friendships kindled through Eureka Gras. Our events have such high energy. I don’t know if it’s the Mardi Gras music or just wanting to get out of the house from being cooped up in the winter. Regardless the reason, we have a fun time.”
Want to go? Here’s a list of remaining events:
Krewe du Kork Hearti Gras Ball and Benefit Dinner ~ February 16
(5 pm, Upstairs at the Grotto)