This weekend, you might be crying again for one of the best-loved characters in musical history, Eva Peron. Andrew Lloyd Webber and Tim Rice’s musical Evita is returning to the Robinson Performance Hall for its 40th anniversary.

From March 15-17, witness the rise of Eva Peron from a childhood of poverty to becoming the most powerful woman in Latin America. Through the narrator Che, the musical tracks Eva’s dizzying ascent from poverty through her acting career, to her marriage to Juan Peron, and her death at age 33. 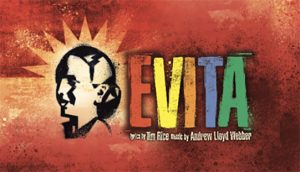 Evita features renowned songs such as “Don’t Cry for Me Argentina,” “Buenos Aires,” and “Another Suitcase in Another Hall.” For its 40thanniversary, the touring production will include “You Must Love Me,” originally featured in the 1996 film Evita. The song, as performed by Madonna, won the Academy Award and Golden Globe.

AY caught up with Andy Ferrara, the show’s director, to talk about Evita and what to expect from this special musical. Ferrara is a director, producer and choreographer who formed his Plan-B Entertainment production company in 2004 to provide “multi-faceted, high-quality entertainment for presenters across the nation.”

AY: What is the musical Evita about? What makes their lives so dramatic?

Eva led a very interesting life as a girl growing up in a poor country in a poor town. And she moved to the big city, wanting to become famous as an actress. She became somewhat famous as an actress before Juan Peron.  She only met Juan Peron because there was a giant earthquake in Buenos Aires; they were at a charity concert together.

Were you familiar with the musical before directing it?

Of course I had seen the show a few times. I actually saw the original with Patti Lupone. When a gentleman approached me to direct and produce the tour, I of course dived in and saw several versions of the show.

How does your production differ from other versions of Evita?

Our take on the show really was historical. Our show incorporates a very large screen. Usually, there’s just a giant balcony on set. It’s a pretty minimalistic set.  So we took that original concept of minimalistic but added a giant screen that people can walk through…and we produce two hours-worth of video…

So what was so intriguing to me was taking it to that real spot, keeping it minimalistic but also going through hundreds if not thousands of photos and newsreel of the time and her, what was happening, and breaking down every song and what direction to take that song.

How long did it take to produce and direct the show? What was it like?

It takes about a year-and-a-half to put together a tour of a show. Almost two years.

It was very fun to do my research and my backstory on the musical.

What’s so great about doing shows is that you really start with blank slate and you go: What do you want to do with this? I want it to be minimalistic and real. We started by hiring a bunch of singers…so we had something to cut the video to.

Very quickly after putting the video together, we realized that we need an Eva that can really sing and dance. We need a strong singing and dancing group that can really take this show somewhere. Normally, it’s a much more “singing” show because it’s a rock opera.

Our Eva played by Yael [Reich]is that person we found. We found her in New York. We had auditions in both New York in Los Angeles. We saw many, many people. We found that person who can sing it, can dance it, and can act it 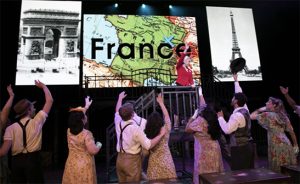 How did you begin directing? What is your favorite part of the job?

I started as an actor on stage and transitioned over the years to directing and producing.

That is my favorite part of directing – to be able to start with that blank piece of paper and go in whatever direction you want to go and get that message across. Sometimes it’s as simple as a word or a gesture or a move. That is quite fun.

What are some of the musicals that inspire you?

I’m a huge Rent fan. I love Rent– it’s a Pulitzer Prize winning piece, and it’s about something that was really happening…and it’s a brilliant musical. I also love A Chorus Line. Those people standing on that line are real people telling their real stories. That’s so fascinating to me it’s told through song and dance. Those are the types of shows that I really love.

What can the audience expect when they come to see Evita?

They’re going to see a pop rock opera, and I think they’re going to enjoy that. I think it’s a very well written show, but it’s kind of fun to enhance it. I hope people will enjoy our take on it.

This interview has been edited for clarity.