Excursion: A Mix of the Old and New

To say that Fort Smith is undergoing a renaissance is an understatement.

By Laurie Marshall :: Photography by Ashlee Nobel and Janet Warlick 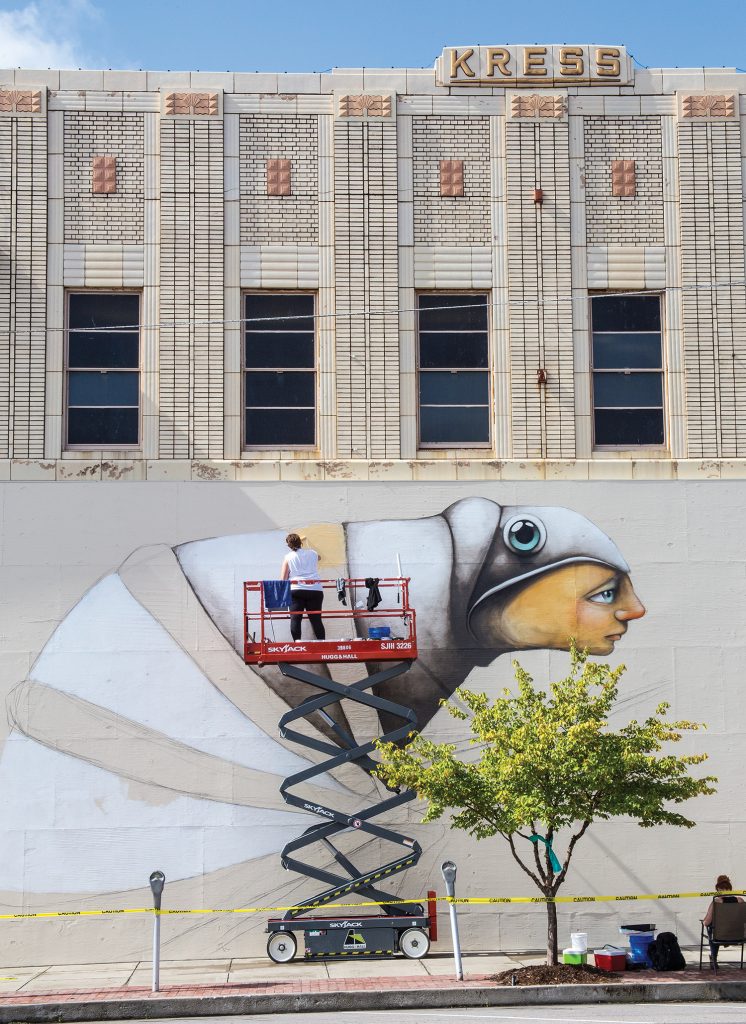 A mural in progress for “The Unexpected,” the state’s largest public mural project.

[dropcap]It[/dropcap] has long been a popular destination for people who love the lore of the Old West, but new amenities now provide alternatives for visitors who aren’t interested in cowboy boots and Wranglers. Thus, it didn’t take us very long to fill our itinerary during a recent visit.

Our day began at Benson’s Grill, a quintessential diner. Online reviews suggested something called the “Meat-O-Rama.” It’s not on the menu, but our waitress Rita agreed, it was not to be missed. Served on a hoagie bun, the sandwich includes three breakfast meats, an egg and house-made bacon jam. It was easy to understand why it’s recommended. The omelet we ordered was perfectly cooked, as were the hash browns. I judge a breakfast spot by the hash browns, and Benson’s Grill passed the test.

Next on the agenda: “The Unexpected,” the state’s largest public mural project (photos at top and right). We gave you all a sneak peek in the September issue. Some of the murals were inspired by stories of Fort Smith’s early days and included nods to that history. Other artists simply did what they do best and filled walls with color and designs that are breathtaking in their scale and ambition. View the entire collection while walking along Garrison Avenue and surrounding streets; a map of the murals is shown on the 64.6 Downtown website.

Here are several of the finished murals in downtown Ft. Smith.

Investigating another new project in the works led us to a large stone sitting on property overlooking the Arkansas River; it was erected to mark the future home of the U.S. Marshals Museum. Still in the fundraising stage, the museum will add another rich layer of history to the area around the Fort Smith National Historic Site, which is located approximately a half-mile away, and where you can learn about life as it was on the edge of Indian Territory in the 1800s – for those on the Trail of Tears to the fort’s soldiers, for the outlaws and the lawmen who chased them. 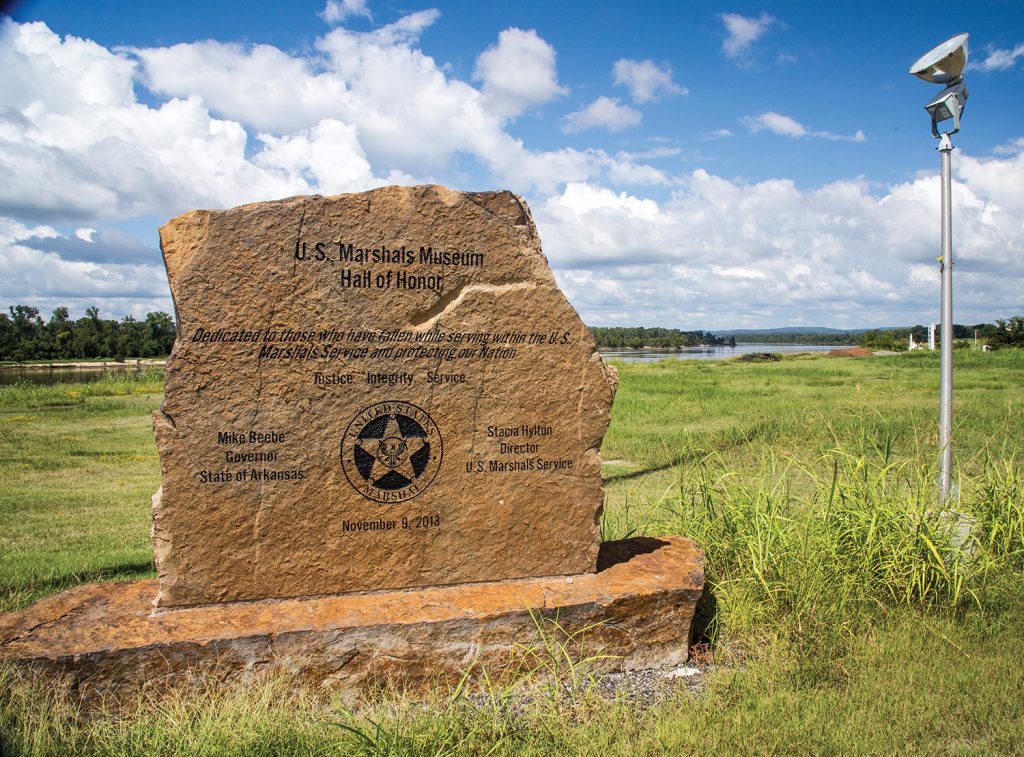 The future site of the U.S. Marshals Museum.

The museum, which will be on a 16-acre site, will tell the two-plus centuries-long story of the U.S. Marshals, a law enforcement agency established by George Washington. It will feature a National Learning Center and a theater that will permanently exhibit the museum’s Marshals Today gallery. Representatives of the “Five Civilized Tribes” — the Cherokee, Chickasaw, Choctaw, Creek (Muscogee) and Seminole — will erect a monument honoring tribal law enforcement. 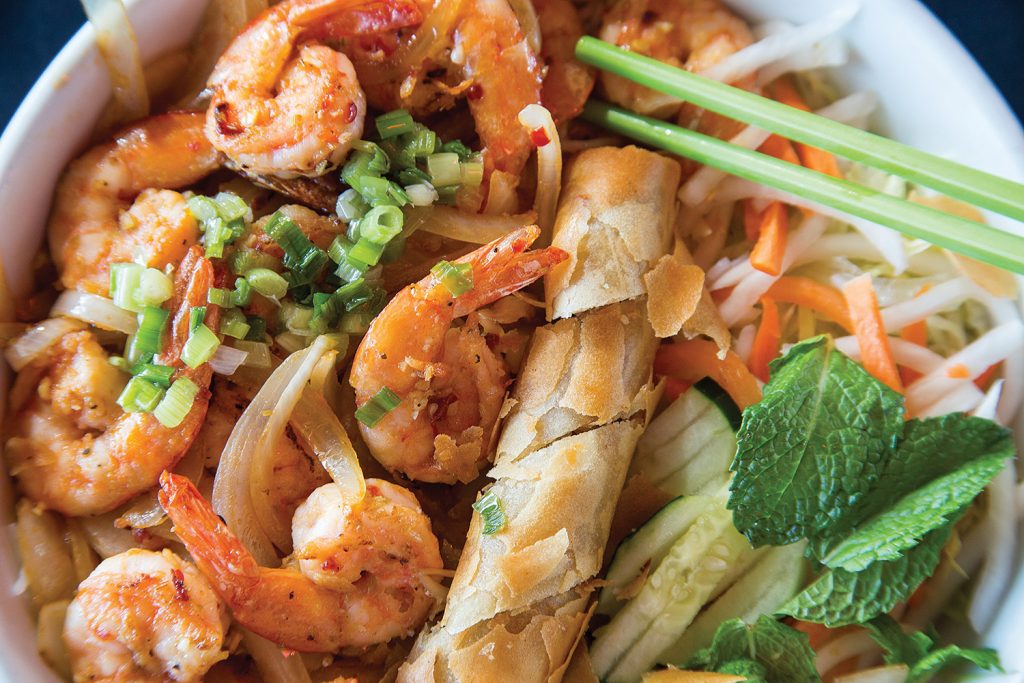 The museum staff is in the process of collecting and cataloging artifacts related to the long history of the U.S. Marshals. Individuals and families who are interested in sharing items and stories about the Marshals are encouraged to contact the staff at their temporary offices at 14 N. Third Street, Suite D, or call (479) 709-3766.

Fort Smith is home to a population diverse beyond its origins, including about 2,000 individuals of Vietnamese descent. There are a number of restaurants in town that serve traditional Vietnamese cuisine, and one of the most popular is the Green Papaya, our lunch destination. It recently opened a new location on Grand Avenue, but we visited the original location on state Hwy. 271 South.

Digital screens in the dining room help guests visualize their most popular menu items. We ordered the No. 15, a noodle dish with sliced pork called the the Bun Tom Thit Nuong, and the No. 28, a rice dish with chicken, the Ga Luc Lac, both of which were recommended by our server. The noodles arrived with a plate of fresh herbs and garnishes diners can add to punch up the flavor as desired, and the sauce on the rice dish was a perfect combination of sweet and spicy. There’s something on the menu for everyone, from basic curry dishes to more adventurous options, and the friendly staff is happy to make suggestions. 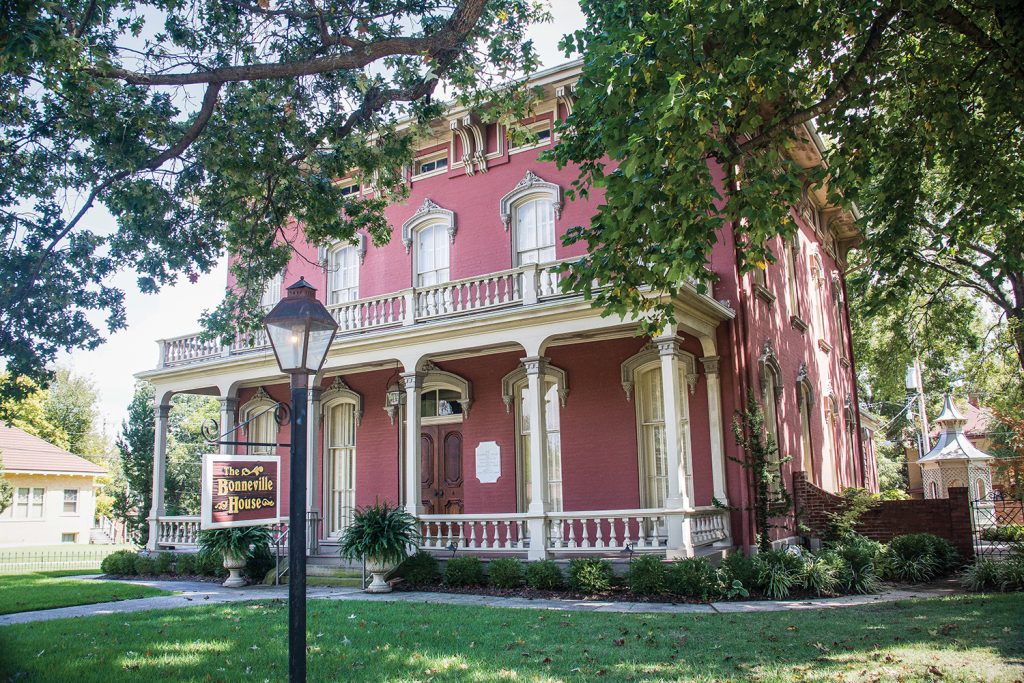 The McKibben-Bonneville House in the Belle Grove historic district.

After lunch, we visited the Belle Grove Historic District, a residential area that covers 22 blocks north of Garrison Avenue. The area represents more than 100 years of residential architecture, and renovations are taking place even as homes become available for sale. Several mansions are open to the public for tours: the Clayton House, the Darby House, the McKibben-Bonneville House and the Fort Smith Regional Art Museum’s Vaughn-Schaap House. They are a “must see” for anyone with a love of vintage and antique furnishings and of architectural design.

As you walk along Garrison Avenue, you may notice an antique trolley car full of riders, another nod to the city’s history. When Fort Smith’s public trolley service was ended in 1933, its cars were sold and scattered, but a local historian happened upon an advertisement for one of the city’s original cars in 1979. He gathered a group of supporters to form the Fort Smith Streetcar Restoration Association Inc. The association bought and renovated that car, and it has since added three more original cars to its collection. You can visit the Fort Smith Trolley Museum and buy a ticket to ride to the site of the former Midland Valley Railroad yard at 100 S. Fourth Street. 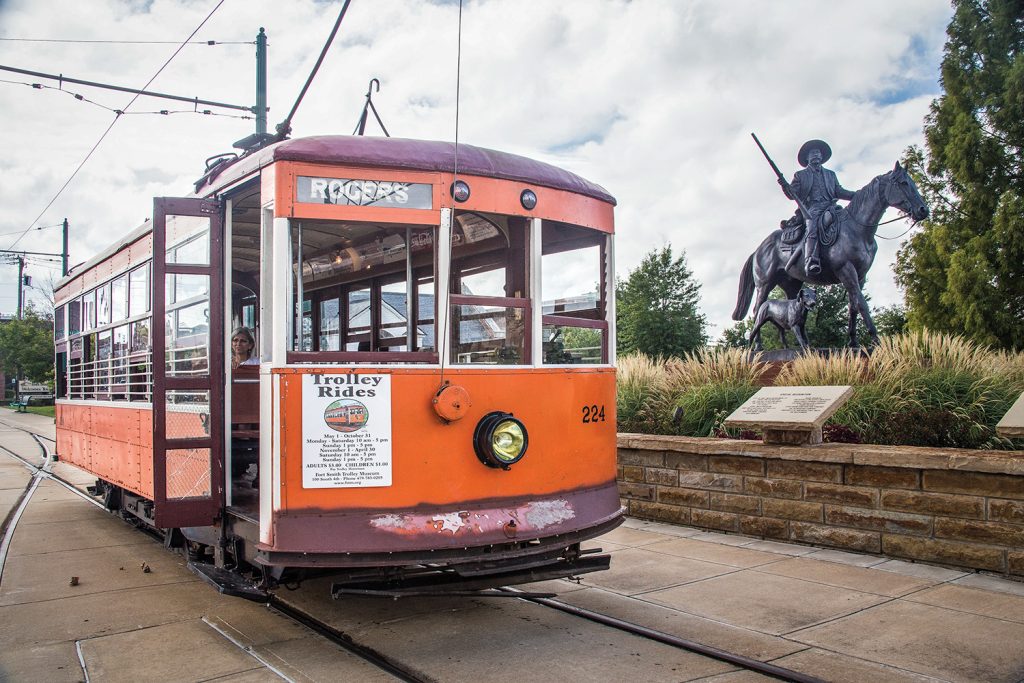 One of the city’s original renovated trolleys. 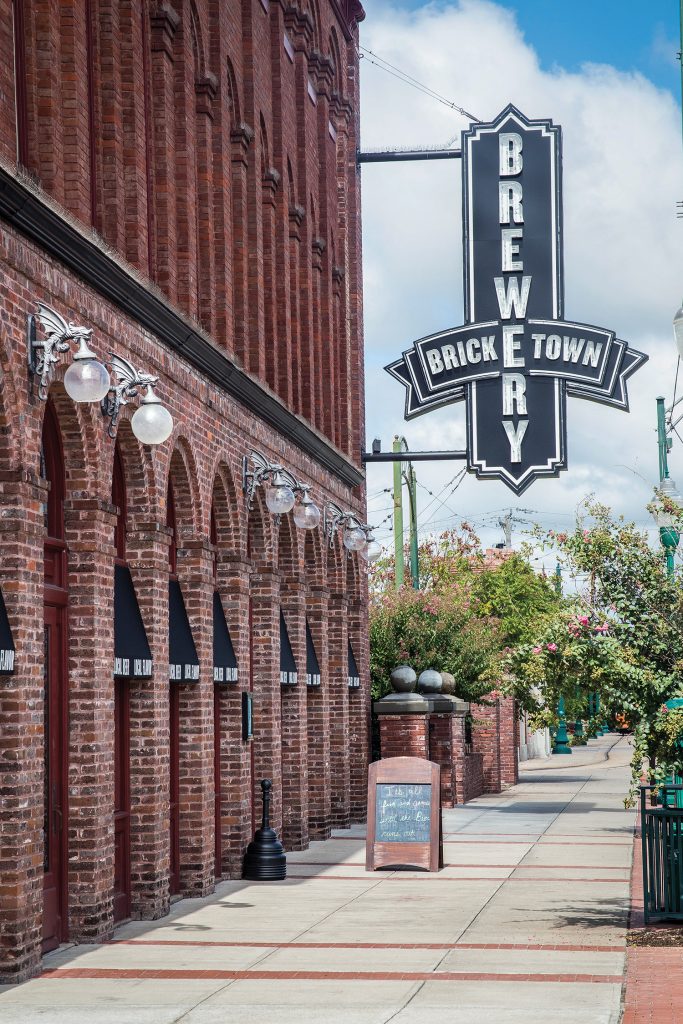 During our visit, we were also excited to learn that Fort Smith is joining a number of other Arkansas regions in welcoming local breweries to their lineup of options for a night out. Oklahoma-based Bricktown Brewery, on Garrison Avenue, has eight original brews as well as beers from breweries around the country on tap. They also have a great menu that includes everything from salads to burgers to artisan pizza.

Springdale-based Core Brewing Co., one of the fastest-growing production breweries in the state, recently opened its fourth pub on Rogers Avenue. In addition to their eight mainstay brews, they keep four taps open for seasonal concoctions.

New to the brewery scene is Fort Smith Brewing Co. They’re working on their line of beers and hope to be in a permanent location some time this month. Keep an eye on their website and Facebook page for updates. 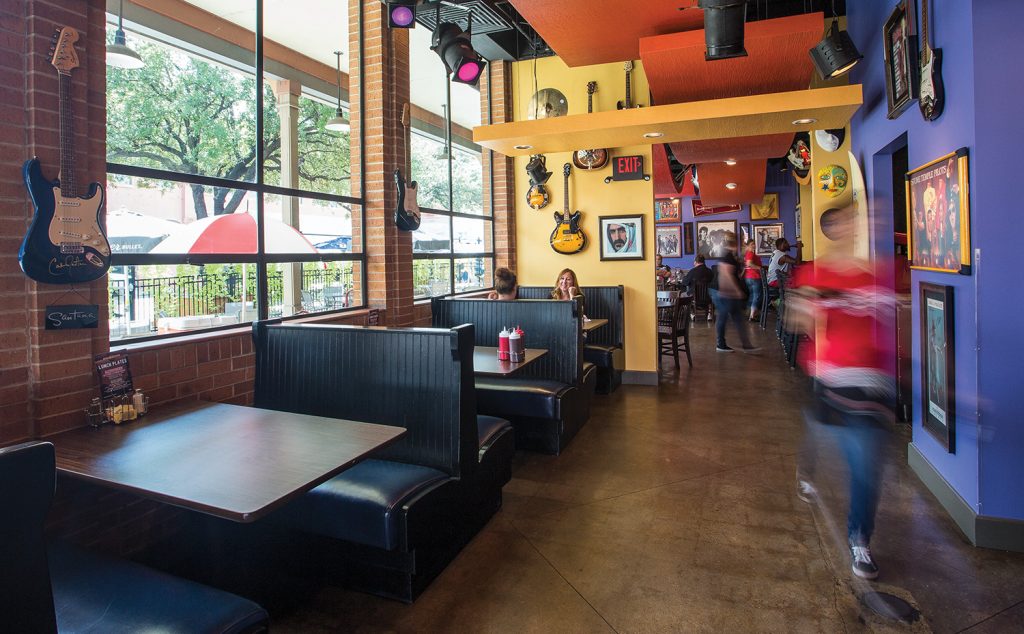 As we wrapped up our day in downtown Fort Smith, we stopped in Neumeier’s Rib Room, an old favorite that recently went through a change. Neumeier’s was the “go-to” place for live music for more than 20 years, but owner Bill Neumeier recently moved the restaurant down the street a few blocks to a building that allows them to focus on the food and let go of the hassle that can accompany managing a music venue. The new place is full of the same enviable collection of vintage rock ‘n’ roll memorabilia for which Neumeier’s has always been known.

We ordered a rack of ribs to share, requesting them “half dry and half wet.” The rack is served intact, but with a partial cut between each rib, to allow easy pulling. The cheesy hash brown casserole and creamy coleslaw were perfect accompaniments, and we recommend upping the ante by adding some of “Shorty’s” tamales to share.

Ending the day at Neumeier’s was a great metaphor for our day — comfortably familiar, but with plenty of the new. If you haven’t been to Fort Smith in awhile, we recommend a return visit.