Known as “Arkansas’ Original Boomtown,” El Dorado is about 120 miles south of Little Rock, and it is booming once again. This time for a different reason: downtown revitalization.

The Past and Present 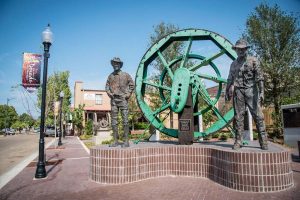 “It’s a good kind of weird … quirky, real creative,” said Mark Givens about his hometown as he pointed down Washington Avenue, once known as Hamburger Row.

Givens, executive director of Main Street El Dorado, explained that during the 1920’s oil boom, there were hamburger stands all along Washington Avenue. “People would sell hamburgers out of their homes, and there were several brothels down there, too,” he said.

During that time, the population of the small south Arkansas town was about 40,000, and that number included many oilmen from Louisiana and Texas. Not long after, prostitutes, gambling and whiskey became commonplace in the downtown area.

On the corner of Cedar and Jefferson Streets, which is near Washington Avenue, a parking lot has recently been transformed into Oil Heritage Park to commemorate the discovery of oil in Arkansas. 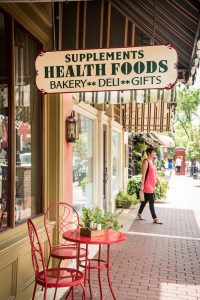 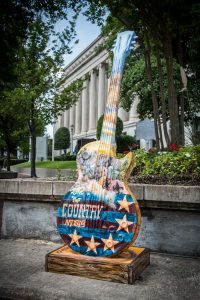 We made a quick stop at P.J.’s Coffee on the square, where I ordered the house specialty: Vienna Crème. The New Orleans-based P.J.’s is the only franchise on the square.

The owners of the coffee shop also have The Spot, a local gathering place for meetings, and El Dorado Creamery, which serves frozen yogurt. Both adjoin P.J’s.

“I believe the only action is downtown,” said Givens as we walked around the square, where the art scene was obvious. On each corner stood replicas of Les Paul guitars that various artists have recreated.

There’s also a host of shopping destinations on the square.

During a quick stop in Sports Alley, one can find anything from tutus to baseball bats. In 1991, co-owner Anne James said she and her friends tired of driving to Little Rock or Dallas just to buy sports equipment for their kids, so they opened their own store. 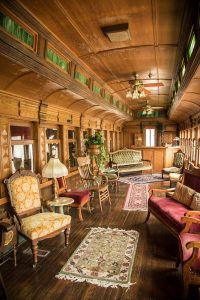 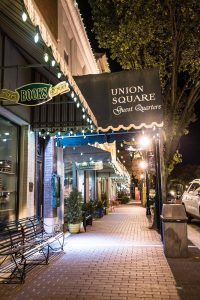 A newer member of the area’s businesses community, Amber Vartenian opened KaiSra seven years ago. Walking into the small, feminine boutique, we admired the crystal chandeliers hung overhead — they reflected the sunlight onto the pink and white walls, where the latest fashion trends hang.

The Olde Towne Store is an old-fashioned shop offering a deli, baked goods and health foods. Given’s wife, Brandi, who works at the charming shop, met us at the door and invited us to sit for lunch. The plate lunch special that day was an exceptional vegetable lasagna with a decadent Oreo cheesecake for dessert.

After a long, tiring day of shopping and sightseeing, I ducked into the Spa on Main where Laura Barrow, spa owner, introduced me to licensed massage therapist, Beth Mann, who gave me a tension-melting massage. Her healing hands eased multiple knots in my back that stemmed from travelling. Then Joanna Benson touched up my makeup, and I was ready to hit the town for the evening.

But first, for an afternoon snack, we stopped in Main Street Pizza on Jackson Avenue. Givens suggested the Armadillo Eggs, which are fresh jalapeños stuffed with pepper jack cheese and wrapped in sausage cheese biscuits. The pizzas are also very good — made from scratch and baked from fresh ingredients in stone hearth ovens. 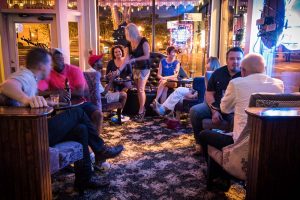 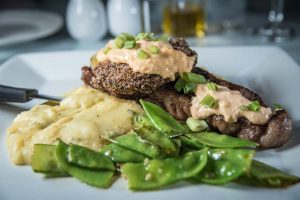 Later that evening, we met several key players in El Dorado’s successful revitalization at Fayrays for dinner. A large harvest table sits outside the front door for dining al fresco. But inside, the preserved pressed tin ceiling hinted at the history of the downtown building. The restaurant once had a King Kong theme, hence the name. However, Michael Rice purchased the restaurant in May 2013 and changed the décor; the walls are now adorned with local art.

For appetizers, Chef Lance Greer brought out buffalo shrimp and NOLA barbecue shrimp with a beer and butter bayou sauce. I enjoyed a classic wedge salad and, for dinner, I took the chef’s recommendation and ordered the melt-in-your-mouth spiced salmon, which was served with tomato and corn pico.

After standing for a moment in the hall deciding which restroom to use — the doors were humorously labeled “sit” and “stand” — I entered the ladies’ room. Inside, the walls were painted with chalkboard paint, but instead of “for a good time, call…” scrawled across the wall, there were uplifting quotes that someone carefully wrote for the next occupant to read.

A short walk down to the corner of East Elm Street and North Jefferson Avenue, took us to Marilyn’s, a bank-turned-Marilyn Monroe-themed bar.

I asked the bartender, who introduced herself as Downtown Sherri Brown, if she had a signature drink.

“Of course, we have The Marilyn,” she said, with a smile.

The Marilyn was a pink, girly drink that tasted just like strawberries and cream served up in a martini glass. I wouldn’t have expected anything less than sweet and yummy for a drink named after Monroe.

The downtown area is also the hub for most of the fairs, musical concerts and festivals in El Dorado.

Givens pointed out the location of the 28th Annual MusicFest El Dorado, to be held Oct. 2 and 3. The lineup will include a variety of artists, such as 3 Doors Down, Dwight Yoakam, Kid ‘N Play and Jason D. Williams. For more information on MusicFest, log on to musicfesteldorado.com. 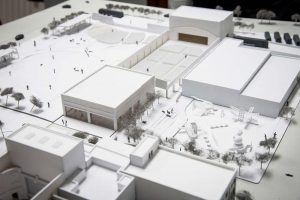 “The Union Square Guest Quarters is the best place to stay, but it’s already full; it’s usually booked a year in advance for MusicFest,” Givens said about the downtown hotel. “We provide free transportation via the city trolley from the hotels outside of downtown throughout the MusicFest weekend.”

As the area has a very active music and art scene, a $75-million project to renovate a three-block by four-block area of downtown into an entertainment district is in the works. It’s expected to be complete by spring 2017. For more information about this venture, log on to eldofest.com.

Dan Smith, vice president of hospitality and operations of El Dorado Festivals & Events Inc., explained that the project will house a farmer’s market, art gallery, restaurant, theater for live entertainment and much more.

“The Rialto will be returned to its original luster and be converted into a playhouse,” he said. The Rialto Theater is on Cedar Street and originally opened in 1929 with 1,400 seats.

“This is a transformative project that could make a vast difference in the future of this town and its citizens … all these events are going to be a blast,” said Terry Stewart, chairman and CEO of El Dorado Festivals & Events. The nonprofit organization’s goal is to make El Dorado one of the top tourist destinations in the South.

Givens said Stewart was familiar with El Dorado and its festivals and events,  aware of the gradual progression, which is why, after retiring from his position as CEO and president of the Rock and Roll Hall of Fame and Museum in Cleveland, Stewart brought his expertise to Arkansas. He’s also the former CEO of Marvel Entertainment LLC.

With the expansion of the entertainment district, there will also be some growing pains.

“We have made huge leaps with all the new sidewalk infrastructure, improving pedestrian access and will continue that effort throughout the new district,” said Austin Barrow, president and chief operating officer of El Dorado Festivals & Events. “My organization is completing a parking and traffic study now to determine what additional parking needs will be, as well as how to handle the swaths of cars we expect at our large festivals.”

El Dorado has major support from three large, publicly traded companies located there. Deltic Timber Corp., Murphy Oil Corp. and Murphy USA Inc. have made significant strides to impact the economic development of the community that now only has about 18,000 residents.

In addition to MusicFest, the El Dorado Film Festival is also coming up. The South Arkansas Arts Center and El Dorado Festivals & Events are joining forces to put on this international film festival, and more than 250 films have been submitted from 27 countries. The festival will be Sept. 17 to 19. Log on to eldofilmfest.com for more details.

To find out more of what El Dorado has to offer, log on to goeldorado.com and mainstreeteldorado.org.