Twenty or so years ago, Wal-Mart vendors began opening sales offices in northwest Arkansas. The resulting influx of folks, primarily from urban areas, has created a population base that values a wide range of dining and shopping opportunities. A visit to a trio of towns in Benton County proves their new communities were happy to oblige.

I met my friend-for-the-day, AY art director Sara Neal, at The Hive (photo at top of page), the restaurant located inside 21c Museum Hotel on the Bentonville Square. The menu created by Chef Matt McClure, a 2014 and 2015 semifinalist for the Best Chef: South award from the James Beard Foundation, features items easily recognized with a fresh culinary spin.

The cheesy grits, like many other ingredients used by McClure, were sourced locally. They were a creamy delight, topped with two perfectly poached eggs, bacon crumbles and an amazing tomato jam. If they sold the jam by the jar, I would have it in my cupboard. The egg sandwich was not unfamiliar-looking, but the onion jam and house-made sausage turned it into something special. Fresh berries and spiced skillet potatoes were perfect accompaniments. The Hive opens at 6:30 a.m. weekdays and 7 a.m. weekends for breakfast. They also serve a daily lunch and dinner, and brunch on weekends.

The Bentonville Square may resemble a Norman Rockwell painting, but it’s anything but sleepy. On Saturdays from April through October, the square hosts the Bentonville Farmers’ Market and is a popular spot for other community activities during the week. This spring, locals anticipate the completion of a new mixed-use development, called THRIVE, already dubbed as the cornerstone of the coming Bentonville Arts District. 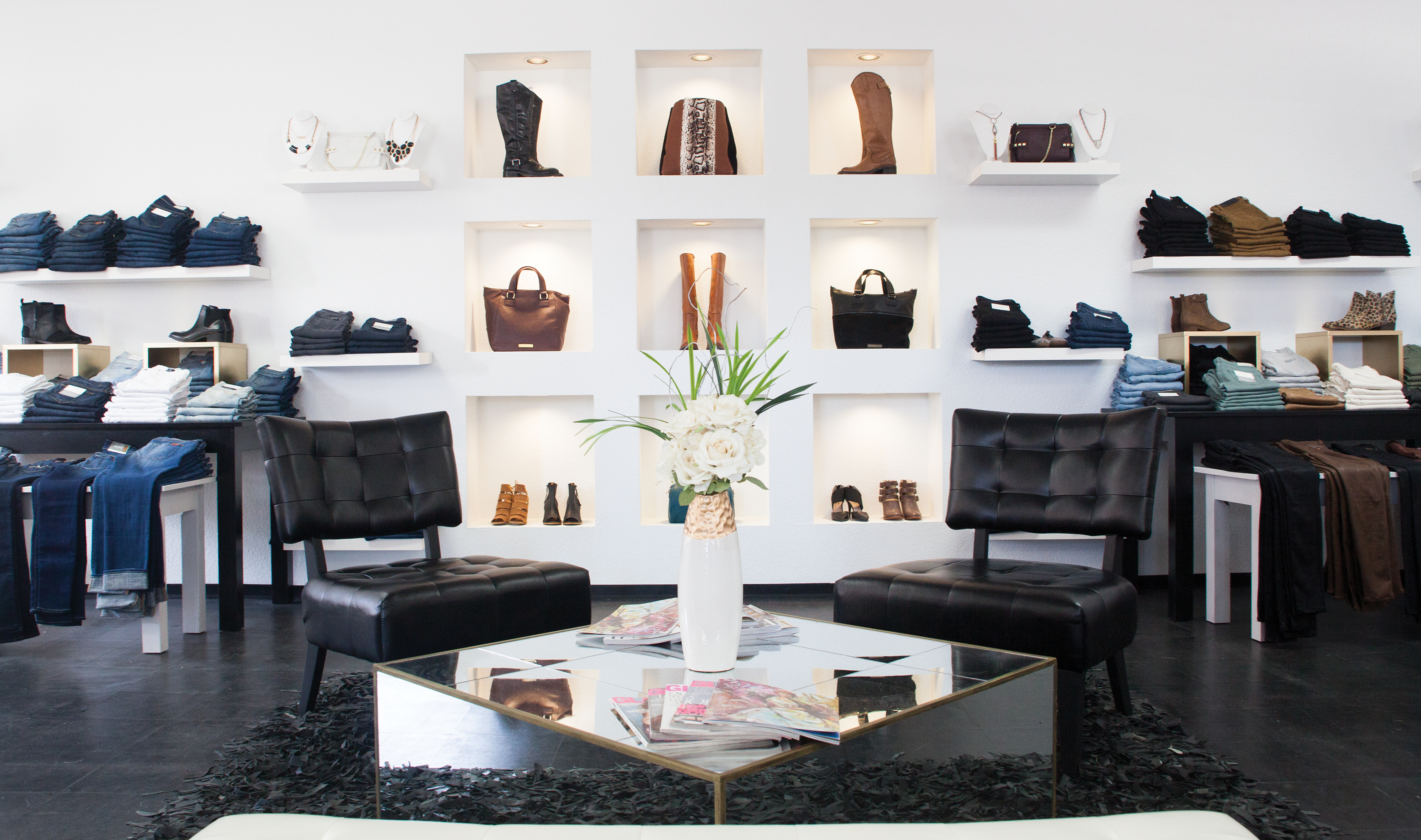 Next stop on our visit: Klōthe, a women’s boutique. Mallory Hauskey opened the shop in 2013 and features clothing and accessories with classic style and a nod to trends that won’t quickly become dated. Blue Moon Market is another women’s boutique on the square. Owners Lindsey Roberson and Rebecca Courtney have nailed the trendy bohemian/gypsy style. They sell clothing, accessories and home décor with an artistic flair. 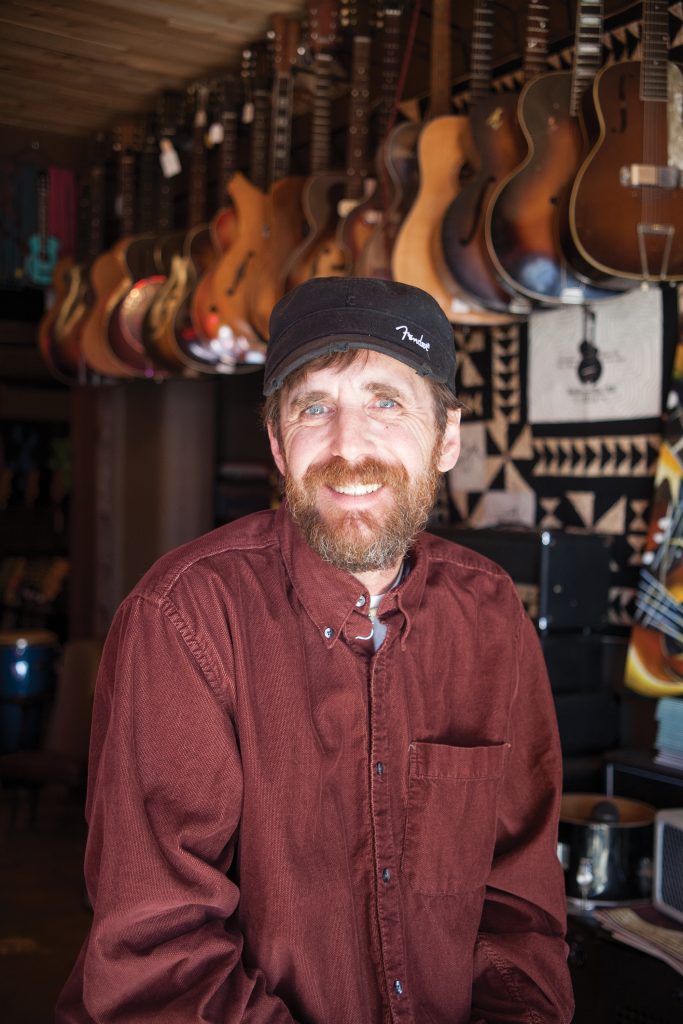 New to the square, Meteor Guitar Gallery is poised to become the coolest new entertainment venue in Bentonville. Owner Leslie Key has opened the gallery space for customers and curious window-shoppers to browse a portion of his guitar collection. Look for the inaugural performance April 25, featuring legendary Southern rock band Black Oak Arkansas.

For entertainment that won’t load your trunk with purchases, check Trike Theater’s performance schedule. A trip to Phat Tire Bike Shop can get you ready for a variety of riding experiences provided by the northwest Arkansas trail systems. Or take it down a notch with a tour of the newly installed “Van Gogh to Rothko” exhibit at Crystal Bridges Museum of American Art.

Just north of Bentonville is Bella Vista Village. Once viewed only as a retirement community, young families are moving there due to its lower home prices and access to seven lakes and six 18-hole golf courses nestled into the surrounding hills. Guests can obtain a day-pass to fish, swim and boat on the village’s lakes; passes are available at several locations around the lakes.

While you’re in the village, visit the Mildred B. Cooper Chapel, an inspiring structure designed by the late E. Fay Jones, the namesake for the architecture school at the University of Arkansas at Fayetteville. The chapel is open to visitors seven days a week. And be sure to pick up a locally crafted souvenir at Wishing Spring Gallery to take home with you. 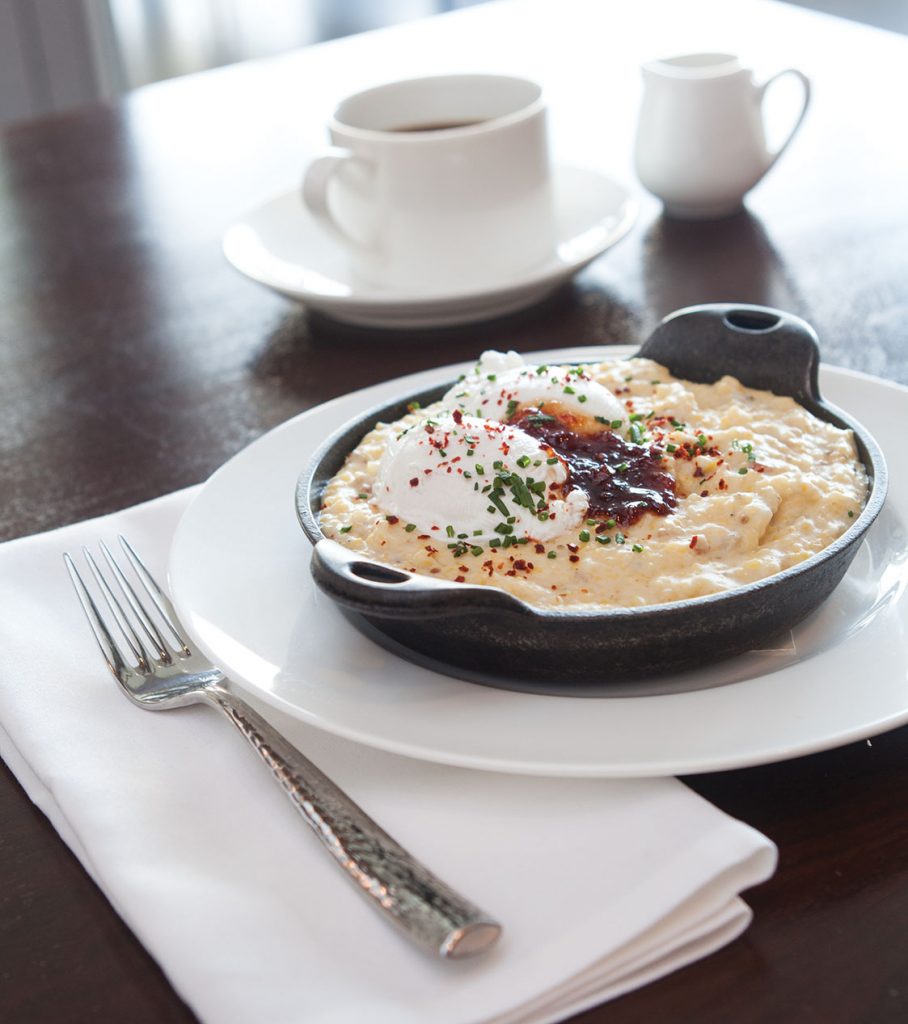 Grits from War Eagle Mill in Rogers are the perfect base for poached eggs garnished with crumbled bacon and tomato jam. 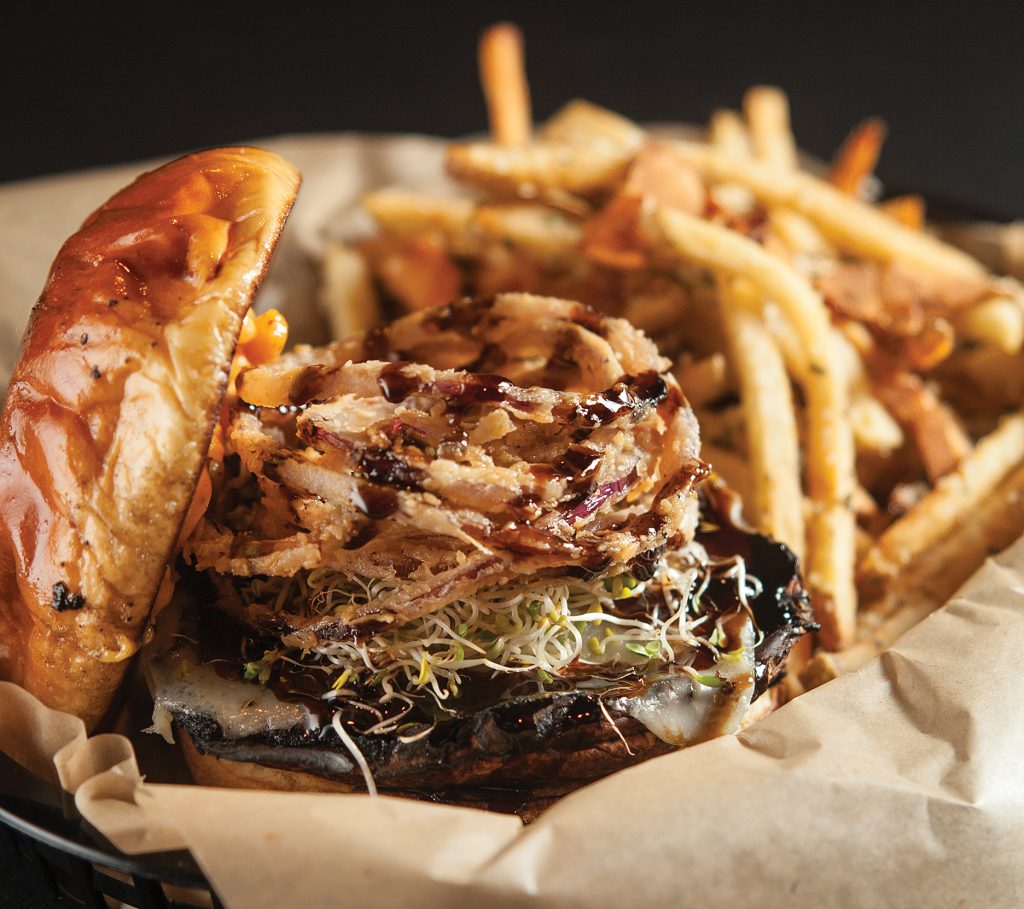 The portobello burger from Levi’s Gastrolounge & Lowbar … you won’t need a take-home box. 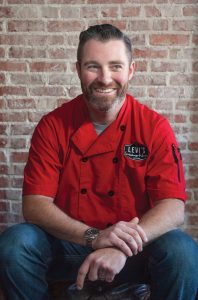 Chef Levi Rush has created a menu to delight your eyes as well as your palate.

Situated directly east of Bentonville, Rogers tends to get lost in the sprawl happening next door, but this little town has upped its game in recent years thanks to an active downtown business community.

For lunch, Sara and I ducked into Levi’s Gastrolounge & Lowbar, a new restaurant and bar located in the basement of the historic Poplar Plaza Building. Located two blocks south of the historic downtown shopping area, it is a perfect destination for a bite or beverage while visiting Rogers.

Owner and head chef Levi Rush spent several years in other award-winning Arkansas kitchens before opening his own place. His attention to plating makes each course a visual treat. Appetizers include new takes on traditional pub fare like cheese fries and guacamole, but also include duck wings and, our choice, the Guamanian Lumpias. Rush’s lumpias were stuffed with sausage, shrimp and vegetables. They were reminiscent of Asian spring rolls, and the hoisin, miso and chili-garlic sauce that accompanied them would be welcome right next to The Hive’s tomato jam in my cupboard. All of Rush’s sauces and dressings are made fresh daily.

Entrée choices included braised short rib sliders; the “Please, Croque Madame,” a grilled ham and cheese sandwich topped with Havarti béchamel sauce and a fried egg; and a selection of burgers with details like Tillamook cheese and Hatch chiles. We decided on a portobello sandwich, which carries the distinction of being the only thing we ordered all day that disappeared completely. Infused and drizzled with balsamic vinegar, topped with crispy onion strings and served with hand-cut fries sprinkled with rosemary, parmesan and shaved garlic chips, it was an outstanding meal. By the time the fresh strawberry shake arrived, we wished for a comfy couch for a nap. 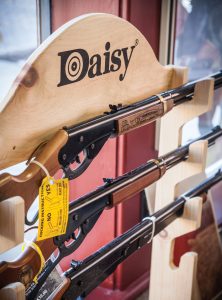 An iconic Daisy Red Ryder BB gun, like the one in the movie “A Christmas Story,” from the Daisy Airgun Museum in Rogers. 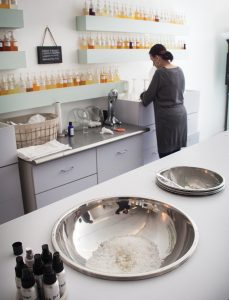 Bathe owner Judy Zimmer was on hand to give us hand scrubs and talk about the science of scent.

Walking off a filling lunch is my favorite way to see a new town, and downtown Rogers provides plenty of things to see and do. Be sure to stop at the Daisy Airgun Museum if you have the kids with you, or if you don’t. The interior is designed to lead you through the history of the company that created the Red Ryder BB gun named for the popular comic strip of the same name. Daisy still makes air guns and accessories in its Rogers factory, and they can be purchased at the museum.

Valere Rene Handbags & Totes has only been open a short time, but it already has a reputation for its custom-made goods. The bags are all made in-house, and you can often hear the sewing machines humming as you browse pre-made bags and accessories in the shop.

Bathe is a rebrand of the bath and body product line previously called Bath Junkie. Owner Judy Zimmer rebranded to focus on her own shops in Rogers, Eureka Springs, Siloam Springs and Asheville, S.C., and has plans to open a new shop in Los Angeles.

Our final stop in town took us to Ozark Beer Company. The two-year-old company recently started selling six-packs of two of their five brews in cans designed by local artists. The brew is worth the visit, but it can also be found for sale in more than 40 locations in northwest Arkansas and in Conway. 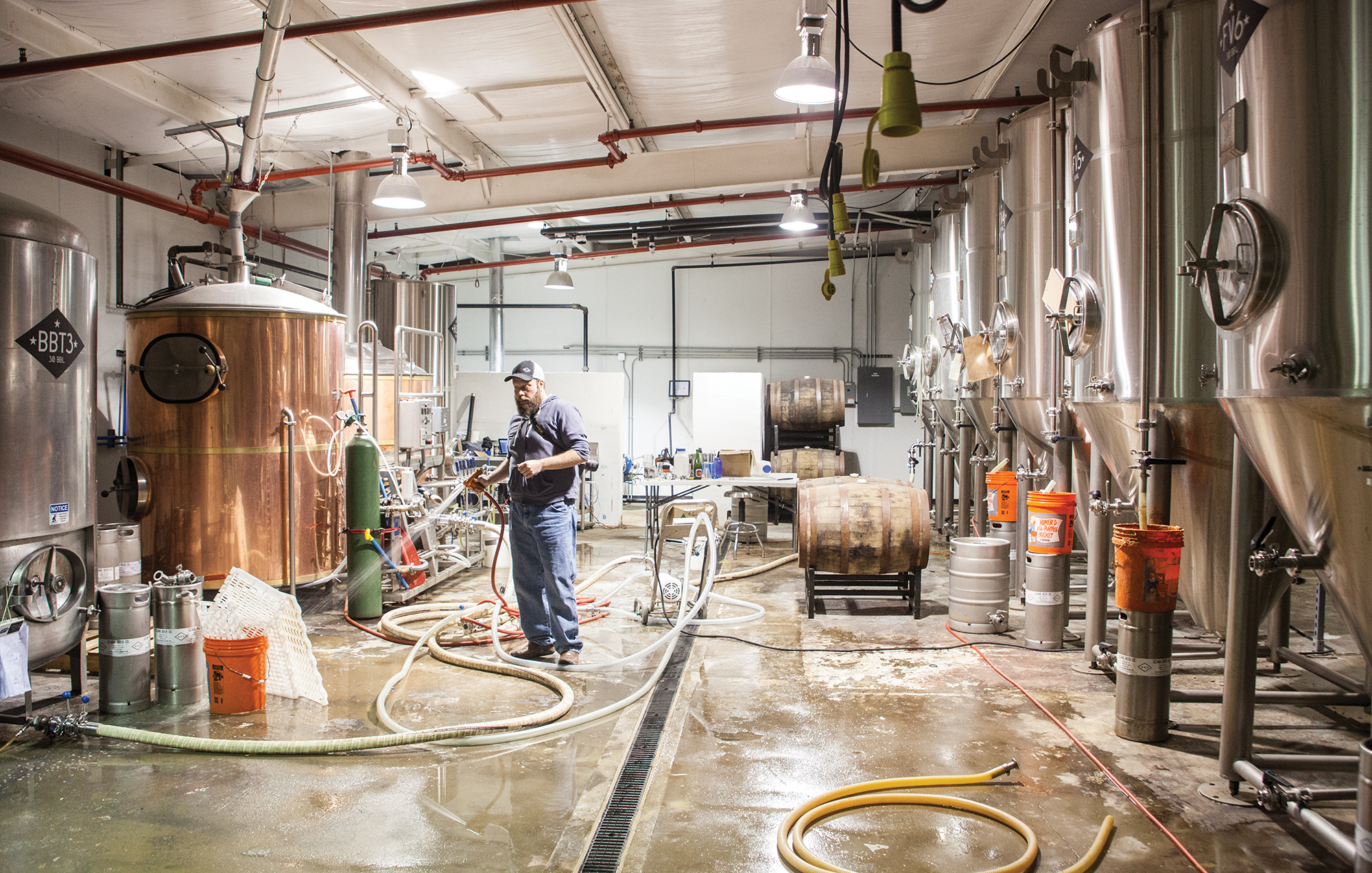 Marty Shutter was kind enough to give us a tour at closing time, but I would recommend getting there earlier to fill a growler or pick up a six-pack at Ozark Beer Company.

Other shops worth a visit include The Rabbit’s Lair, The Imaginarium, Trolley Line Bookstore, Poor Richard’s Art, Pigmint florist and Golden’s Jewelry. There are too many shops around the historic district to list, but that’s what makes an excursion worthwhile.

Come spend a day or two in Bentonville, Bella Vista and Rogers, and get acquainted with their new, old Southern charm.