Excursion: Oaklawn – The Road to the Triple Crown Begins Here

It’s a crisp January morning at Oaklawn Park, and the horses are out jogging, galloping and doing timed works in preparation for upcoming races.

[dropcap]It’s[/dropcap] Jan. 15, and the live racing season has officially begun.

We had the pleasure of watching the horses as they worked out. “That’s Jon Court out there,” said press box manager Sunny Taylor, as she pointed out onto the track.

Court, 55, is one of the leading riders at Oaklawn. He’s won an astonishing number of races at some of the nation’s most prestigious tracks. In fact, he recently won the Smarty Jones Stakes race at Oaklawn to earn points for the 2016 Kentucky Derby.

“It takes a 2 year old six to eight months of training to be ready for a race,” said Eddie Ruiz, assistant trainer at Step Ahead Thoroughbred Training Center, where numerous racehorses are boarded and trained. The horses can start racing when they’re 3 years old.

Photo at top of page: Justin Zee, one of more than 100 horses boarding at Step Ahead Thoroughbred Training Center

If you’d like to see them up close and personal, plan to attend a Dawn at Oaklawn. Each Saturday morning, beginning Feb. 13, during Dawn at Oaklawn, visitors have the opportunity to take a behind-the-scenes tour of the facility. From 7:30 to 9:30 a.m., you can watch the horses train, take a guided tour through the barn, and enjoy free coffee and pastries. 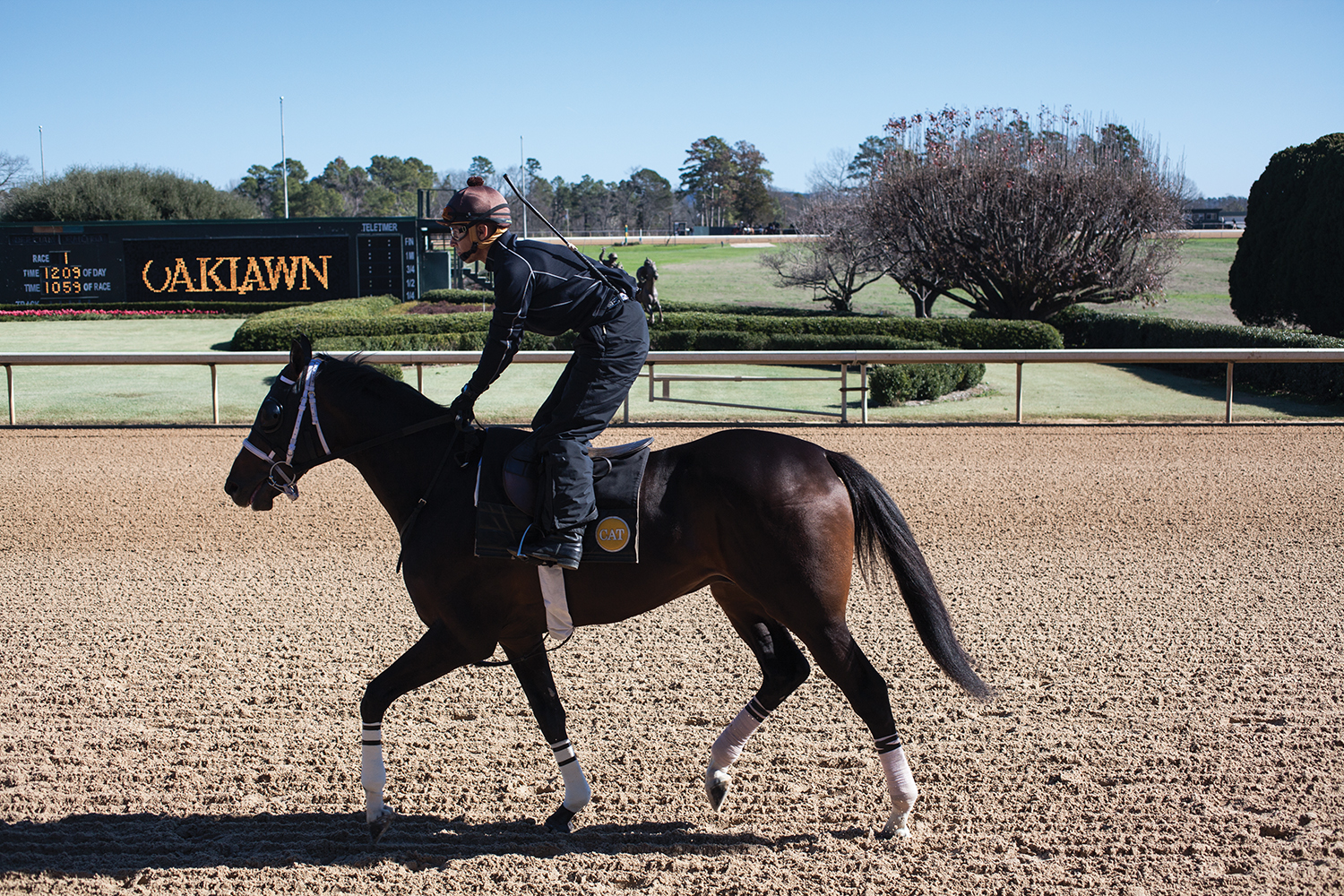 Oaklawn Racing and Gaming has three main parking lots. There’s a $2 charge to park, but there’s no fee for admittance.

“This is the second year that general admission is free,” said Jennifer Hoyt, media relations manager at Oaklawn. “Last year, as a thank you to our fans, who stuck with us during our $20 million expansion in 2015, we began offering free admission.” As an added convenience, seats can also be reserved for $2.50 a piece on weekdays and $4.50 on weekends.

You cannot miss Oaklawn’s front entrance. Greeting visitors is a statue of a jockey on a horse. Each year, it’s painted in honor of the previous year’s Arkansas Derby winner. This year it’s turquoise with yellow polka dots, the color of the silks for Zayat Stables, owners of the winning American Pharoah.

History of the Track

Louis and Charles Cella, brothers from St. Louis, founded the Oaklawn Jockey Club in 1904. The inaugural race opened the track in February 1905; that first season ran through March 18.

“Oaklawn is the longest, continuously owned sports franchise in the country, through all sports genres,” Hoyt said.

Last year was one of the most impactful years in the track’s history. It began with a debut of a $20 million expansion of the gaming area, complete with the new Silks Bar & Grill.

American Pharoah, winner also of the 2015 Rebel Stakes, became the third Arkansas Derby winner to take the Kentucky Derby, the seventh to capture the Preakness Stakes and the fourth to snag the top spot at the Belmont Stakes, earning the title of The Triple Crown. He then went on to win the Breeders’ Cup Classic. 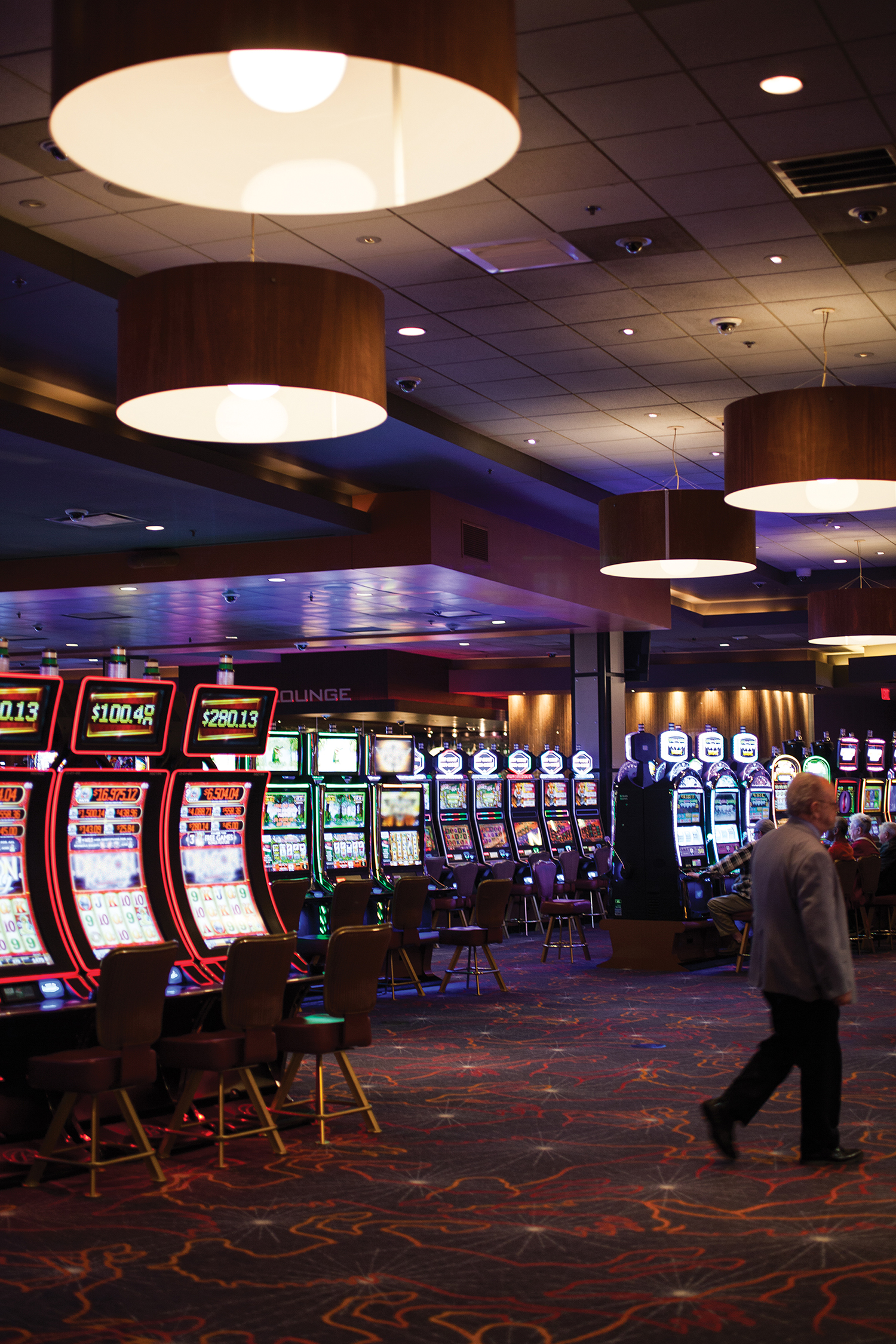 The recently expanded and updated gaming room at Oaklawn.

“The public determines the odds,” Hoyt said. “The more money wagered lowers the odds of winning.”

Once inside the main racing entrance, officials recommend spectators purchase a program for $2, before deciding on which horse(s) to bet. There are three ways to bet: online by using Oaklawn Anywhere on your smartphone or tablet, at one of the track’s mutual tellers or at one of its self-bet machines.

“To bet, you need to know some basic information, such as the track name, race number, bet amount and type, and the horse’s number,” Taylor said. For example, Oaklawn, race four, $2 to win on horse No. 3 (although, it may seem obvious that you are at Oaklawn, but you can place a bet on horses at other tracks as well).

If you’d like to see the horses before placing a bet — or just to take in the beauty of these majestic creatures — a visit to the paddock is in order. “Oaklawn is one of only a few tracks that has an indoor paddock,” Hoyt said.

You’ll also want to look through the program and consider the odds. Read the recent race history of the horses. While they’re in the paddock, take note of how the horses behave. If they’re too spunky, they may be wasting energy that could be used on the track.

Superstition has it that if there’s a gray horse in the race, it will win. Many betters pick based on their personal lucky numbers or favorite colors, or simply because they like the names of the horses. There may not be any science to choosing a winner, but it can be a lot of fun.

You’ll also need to be familiar with the terms exacta, superfecta and trifecta. Exacta is a bet in which the better picks the horse that will come in first and second place on the ticket. A trifecta is when the better chooses the finishing order of the first three horses in the race. A superfecta is a wager on the order of the first four finishers of the race. You can also “box” your bets, meaning to choose any order of finish for any of the three types of bets; this results in a higher payout.

Watch a few races before you bet, set a budget and have fun. Who knows, you may go home a big winner.

If games of chance are more your cup of tea, you’ll want to stop in the gaming area. There are hundreds of electronic games, including video poker. There’s also live blackjack and poker games, roulette, craps and a high limits area. 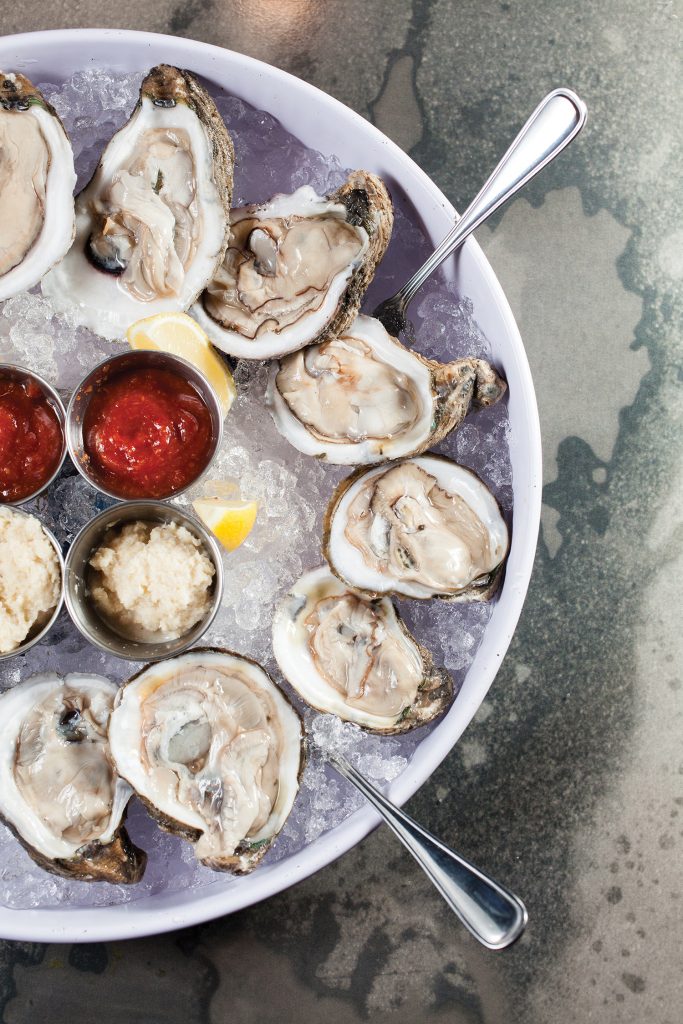 Oysters on the half shell at Silks 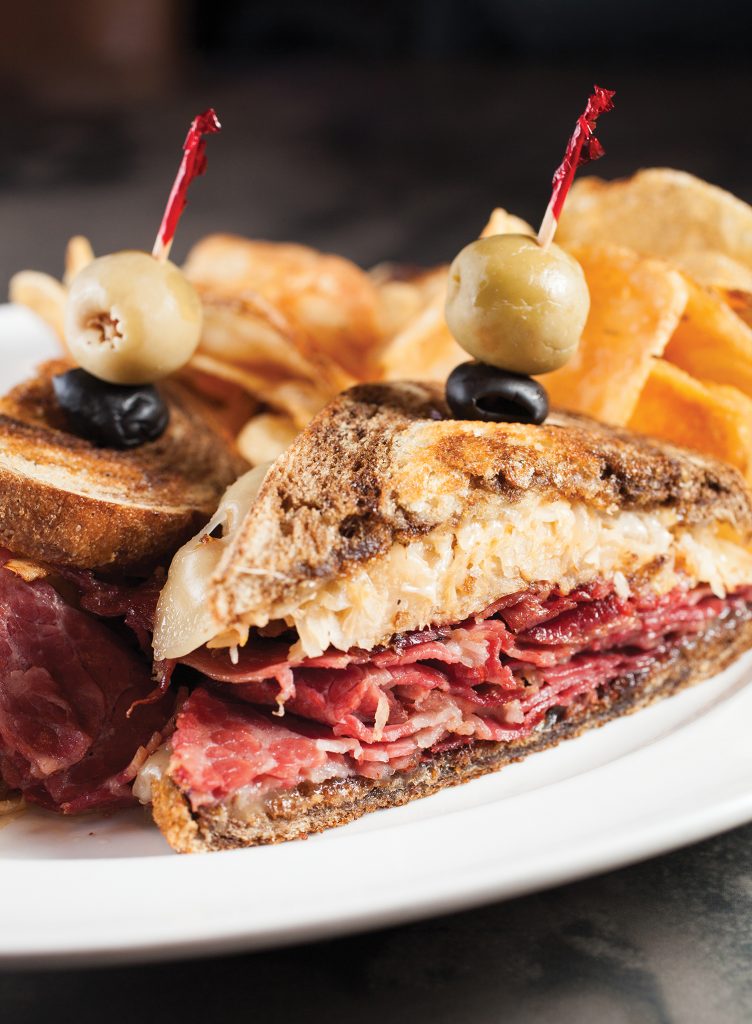 There are a number of great places to eat at Oaklawn. The Carousel is one of them. Here, diners can reserve a table for the day for $5 per person. The tables are positioned so patrons can see the track from the wide stretch of windows.

The restaurant is named for the skillfully, hand-carved carousel horses, some dating back more than 100 years, that provide a perfect backdrop to the eatery. While there, you may wish to sample Oaklawn’s famous corned beef sandwich.

“In 2004, Oaklawn celebrated its 100th year, and as a throwback to that, we started selling our corned beef sandwiches at the original price of 50 cents [on opening day],” Hoyt said. It’s become a tradition that Hoyt said will probably continue.

Silks, one of the newest restaurants at the track, is known for its oysters, burgers and, of course, corned beef Reuben sandwiches. The oysters were served on the half shell with horseradish, cocktail sauce and lemon. If you really enjoy oysters, a stop at The Oyster Bar is in order; Oaklawn is known to buy the best oysters available.

A day at Oaklawn isn’t just about gambling. It’s about fun, food and possibly watching history unfold. The live racing season continues through April 16. If you’d like more information or would like to make seat reservations, call 800.625.5296 or log on to oaklawn.com.