Even without the great food, good performances and diverse shopping, Texarkana is worth a visit simply because it’s like no other town.

[dropcap]Rain[/dropcap] clouds swelled overhead as Bill Scurlock opened the front doors of Pecan Point Gastropub & Brewery. Inside, “Templeton Morgan,” is spelled out in the mosaic tiles just inside the front door, and brick, original to the building, shows through broken plaster on walls of the historic building that has housed a saloon, drugstore and clothing store at various times since 1902.

“This was once [Templeton-Morgan,] a men’s clothing store,” Scurlock said, pointing to a couple of men’s hats perched on a shelf near the bar. “Those hats were my father’s and grandfather’s; they were made by Templeton-Morgan. Hank Williams had one, too.” 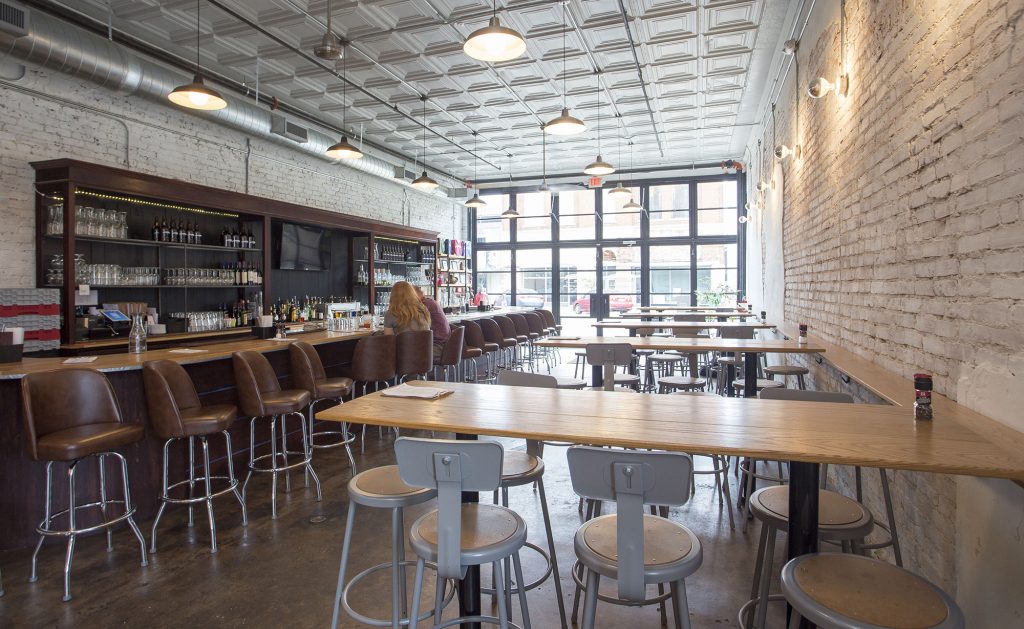 Pecan Point opened in October 2014 after Scurlock and his team renovated two historic buildings that now share the address 213 Main St. in Texarkana, next to the Perot Theatre. The beer hall features white oak, family-style tables designed by Scurlock’s son, Justin, a New York-based architect. The idea for Pecan Point came to Scurlock in the fall of 2013, after his friends encouraged him to market his home-brewed beer.

“I originally wanted a hole-in-the-wall brewery, but we decided to make it a full restaurant,” Scurlock said.

Scurlock and his son, Jacob, produce craft beers in small batches from original recipes with names — such as La Harp Pale Ale, Spring Bank Porter, Spanish Bluff Imperial Stout and the best-selling Pecan Point Ale — that reflect historic places in and around Texarkana.

We began our Pecan Point experience with a plate piled high with duck fat fries. Definitely not average pub fries, these potatoes are plunged into duck fat and fried to perfection, sprinkled with smoked salt and served with truffle mayo and house ketchup. The fisherman’s sandwich, a beer-battered cod and crab cake sandwich punctuated with spicy remoulade and zucchini slaw, is almost too large to get all of its goodness in one bite. The menu also includes duck & grits, a dish composed of southern-style greens and tender medallions of duck cuddled up to grits topped with a blueberry compote, ancho chili and sage butter. This seems like an odd combination, but chef Becky Williams must have waved a magic wand over it, making this one of the most memorable meals I’ve eaten in a long time.

For a more intimate meal, the adjacent dining room holds similarly designed tables that seat smaller parties. After diners fill their bellies with spectacular food, they can walk next door to the Perot Theatre to see a show. 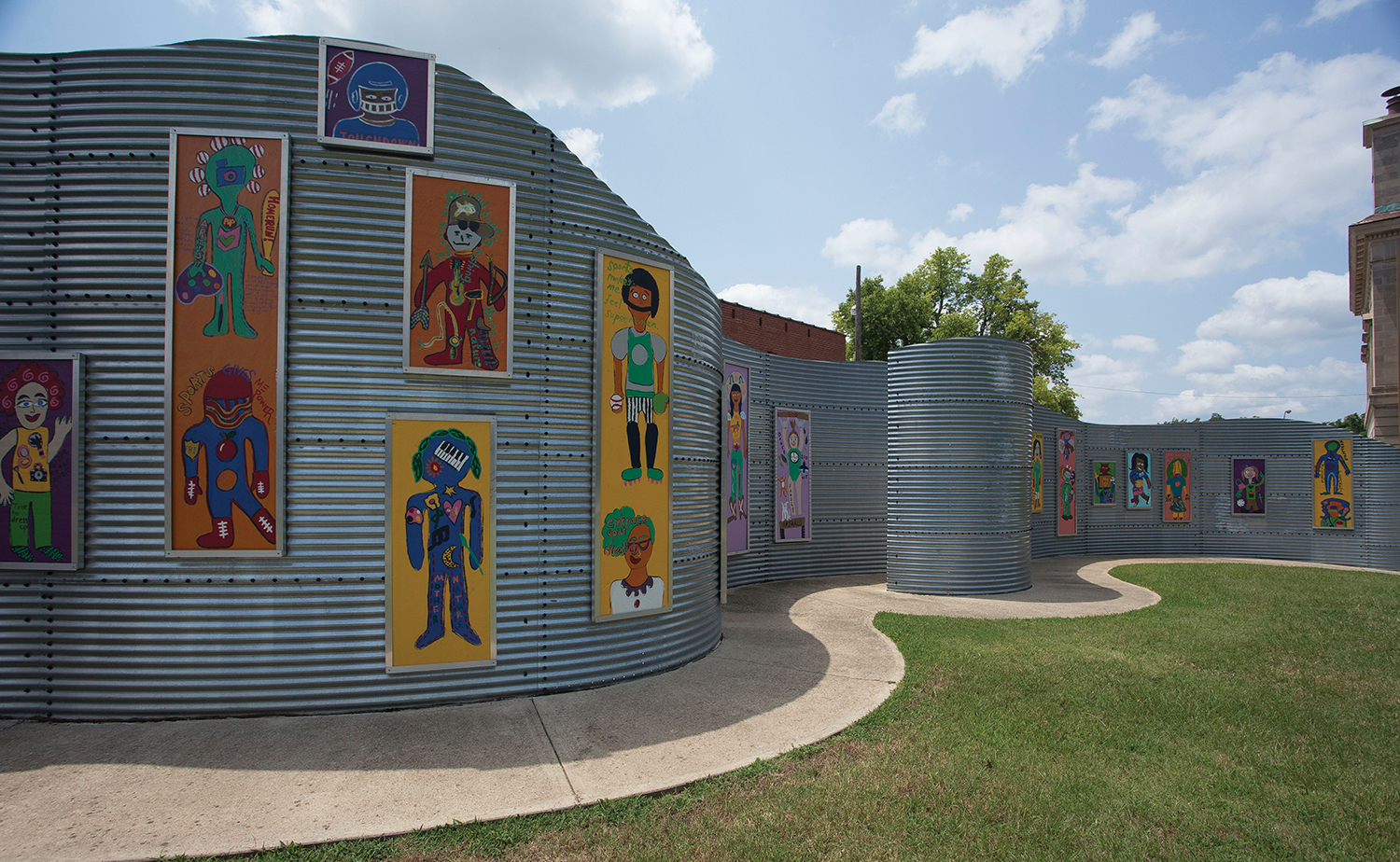 the ArtWall, the ArtSparK outdoor exhibit

“This is the jewel of Texarkana,” said David Murphy, marketing director for the Texarkana Regional Arts & Humanities Council (TRAHC).

Murphy’s love of the theatre began when he was in second grade. His mother bought him season tickets for Christmas each year until he left for college. Murphy walked through the aisle in the mezzanine, pointed to a particular seat and smiled. “First row, second seat,” he said.

That’s where he sat each year and where he saw his first opera, musical, ballet and play. “I love theater,” he said, “and coming in and sitting down and the excitement of it — anticipating something that is about to happen.”

“The Saenger brothers built theaters all over the South as part of a Vaudeville act,” Murphy said. “In the ‘30s or ‘40s, it was bought by a motion picture company, renamed Paramount and turned into a movie theater.”

In the 1970s, Murphy said people stopped coming downtown to watch movies after a multiplex cinema was built outside of town. The theater sold to the City of Texarkana for $16,000 and was offered to the TRAHC, but the group was tasked with the restoration expenses. That is where Texarkana native H. Ross Perot stepped up and donated more than half of the $2.6 million restoration budget. The theater was then named after his parents, Gabriel Ross and Lula May Perot.

Some of the notable performers who have graced the theatre’s stage include Cary Grant, Wynton Marsalis, David Copperfield and Harry Belafonte to name only a few. The theater is in its 35th season and will feature “The Nutcracker,” Dec. 4 though 6; the National Circus and Acrobats of the People’s Republic of China, Dec. 10; and Christmas at the Perot, Dec. 13. 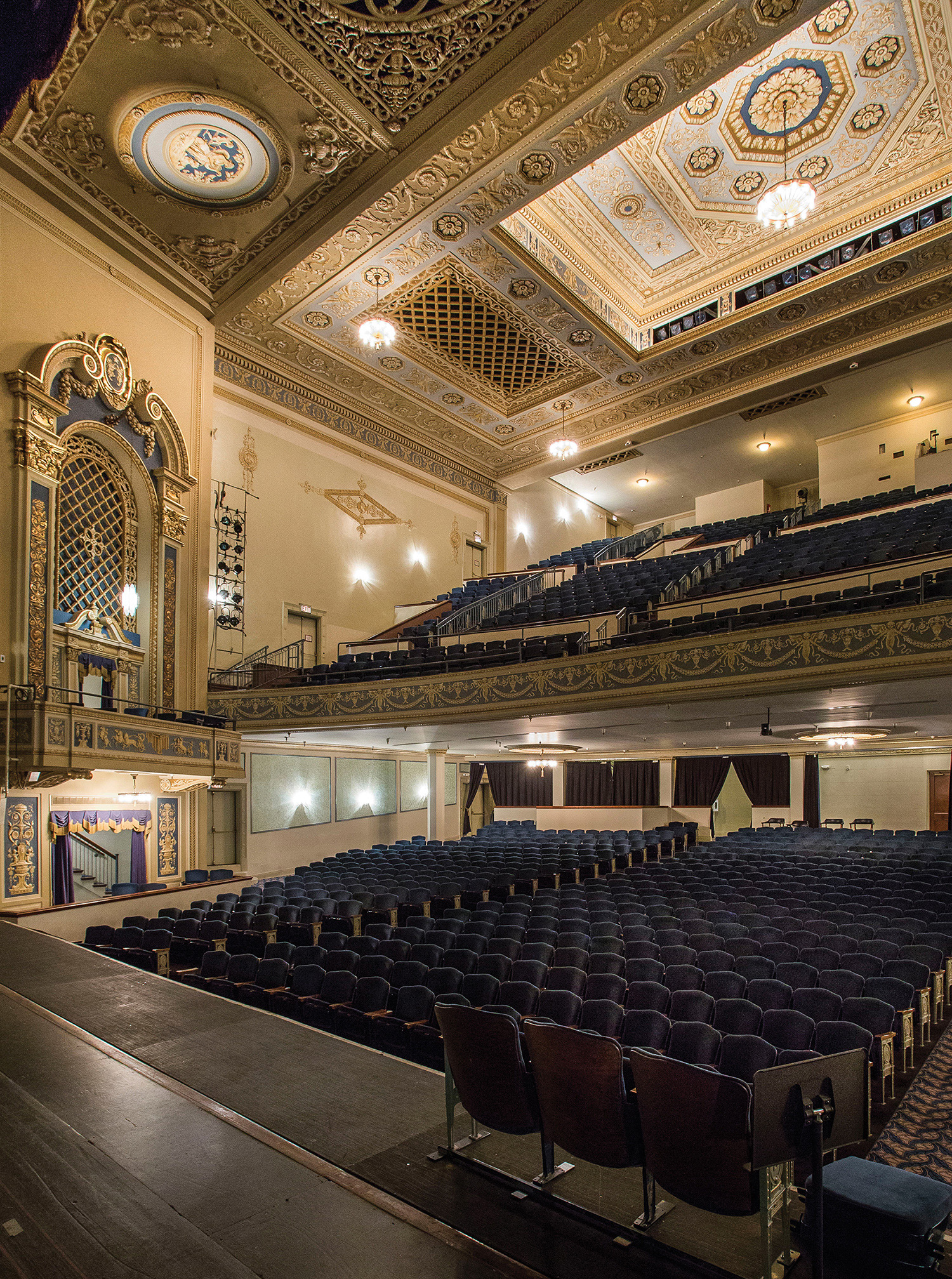 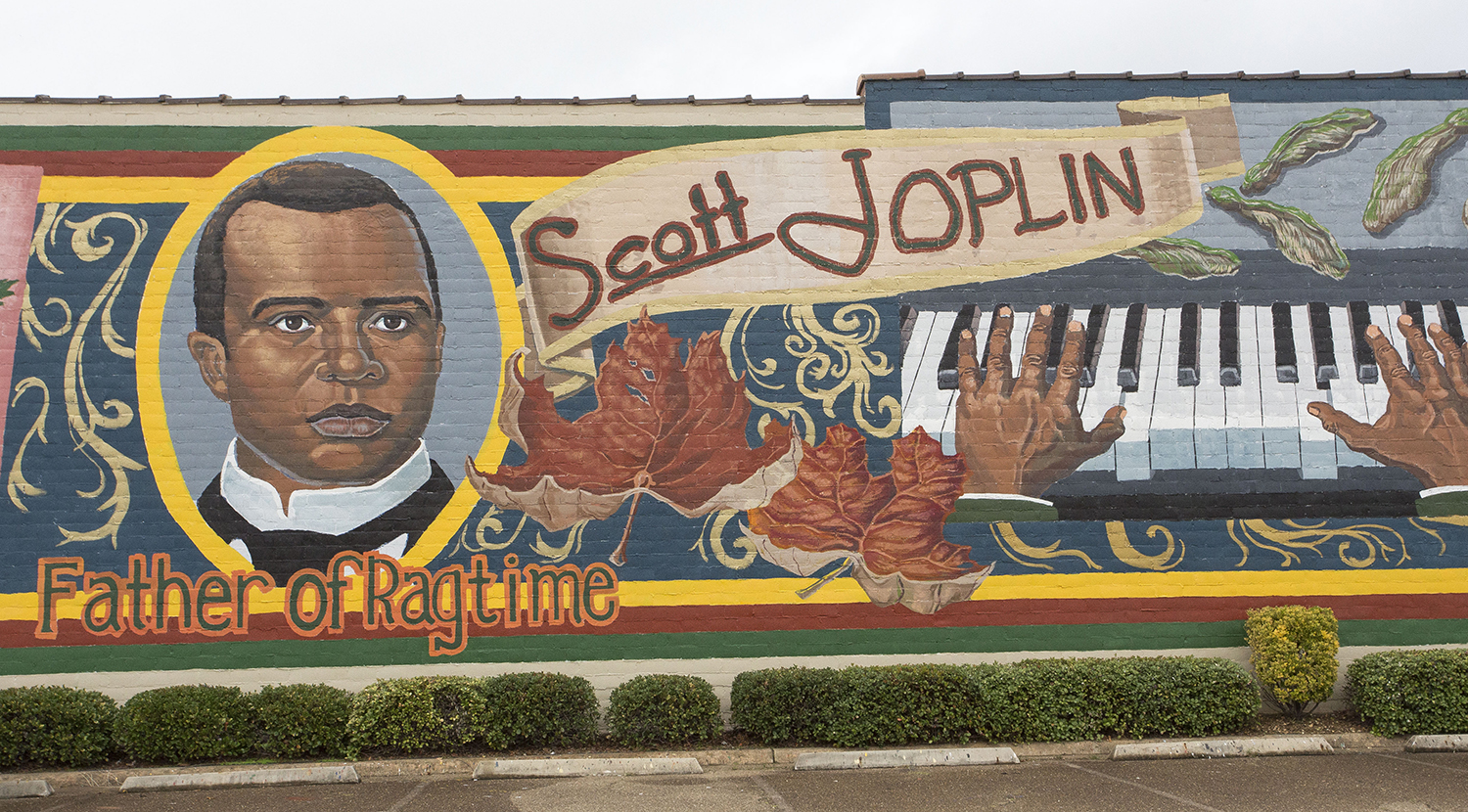 In addition to the Perot Theatre, just around the corner and past the newly painted Scott Joplin mural, sits Regional Arts Center. This building was once a federal courthouse and has gone through an adaptive restoration over the years.

Mary Starrett, the art center’s administrative director, lead me on a tour through the current exhibit featuring Thomas Cole, an iconic 19th-century artist. Then she showed us what is considered a crown jewel: a spectacular copper elevator.

“This is only one of three left in the country,” Starrett said about the elevator as we entered it. Next stop: the Horace C. Cabe Great Hall. The hall was once a courtroom, but now serves as a hall for weddings, dances and other gatherings. It’s easy to envision special events in this room; the walls and ceilings, featuring beautifully intricate details that include a large eagle, were all discovered when the once-lowered ceilings were removed during the restoration process.

A Bit of Retail Therapy

A quick walk-through isn’t enough to see all the perfectly placed vignettes at Sticks and Stones the Boulevard. After a fire about a year ago at its previous location, Sticks and Stones owner Kyle Barrett said he plans to make the temporary location at 3303 Texas Blvd., a permanent home.

“I started this in 2008,” he said about his beautiful shop, “I wanted to bring something really different to Texarkana.”

Barrett points out glass art by James Hayes of Pine Bluff and pottery by Nina Cork from Texarkana. Shoppers can find everything from rugs to candles, order flower arrangements or take advantage of Barrett’s interior design services.

Just a few miles down the road, you’ll find Crocker’s Fine Jewelry. Set in a glamorous 8,000-square-foot building, Crocker’s was named one of “America’s Coolest Stores” in the August 2015 issue of InStore magazine —  it was ranked No. 2 out of 118 in the “Big Cool” category. Shoppers will find Pandora, Gabriel & Co., Alex and Ani and many other brands, along with great customer service, all of which are key in this lovely retail space.

Even without the great food, good performances and diverse shopping, Texarkana is worth a visit simply because it’s like no other town.

Second only to the U.S. Supreme Court in Washington, D.C., the State Line Post Office and Federal Building (photo at top of page) is the most photographed courthouse in the country. Visitors can stand with one foot in Arkansas and one foot in Texas.

There’s much more to see and do in Texarkana — including the Live United Texarkana Bowl; a number of day spas; the beautiful, art-centric Omega Building; the Twisted Fork Grill & Bar; Phillips Forest Products and more — log on to visittexarkanausa.org for more information.