You may have heard a lot of national buzz recently about the growth in Northwest Arkansas. Its population surpassed the half-million mark last year, and it seems every month there is a new article about one city or another along the I-49 corridor being named “best” for some distinction. We definitely think it’s one of the best places to spend a summer day, or two.

TOP PHOTO: Dickson Street in Fayetteville is the perfect place to begin a summertime getaway in Northwest Arkansas.

Dickson Street in Fayetteville has not always been the go-to destination it is today. In the mid-1800s, the street was considered “out in the country,” located as it was on the north edge of the city limits. The 1970s and ’80s saw a downturn in the economy, and many in town will tell you they were not willing to spend time on Dickson, especially after dark. 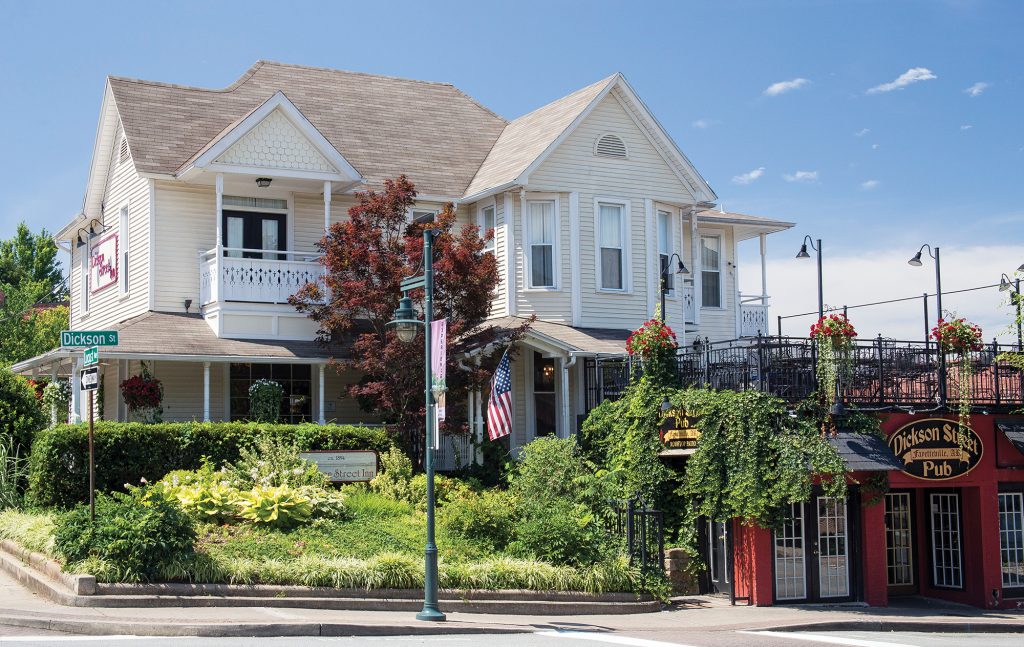 With its porches, patios and comfy rooms, the Dickson Street Inn provides more than just an outstanding location for its guests.

We ducked into Puritan Brew Co. to get caffeinated. Puritan’s motto “Start well, end well.” alludes to the fact that they sell beverages containing both caffeine and hops. The café has plenty of space to spread out, or to curl up and read, work or gather with friends, making it a popular spot around the clock. 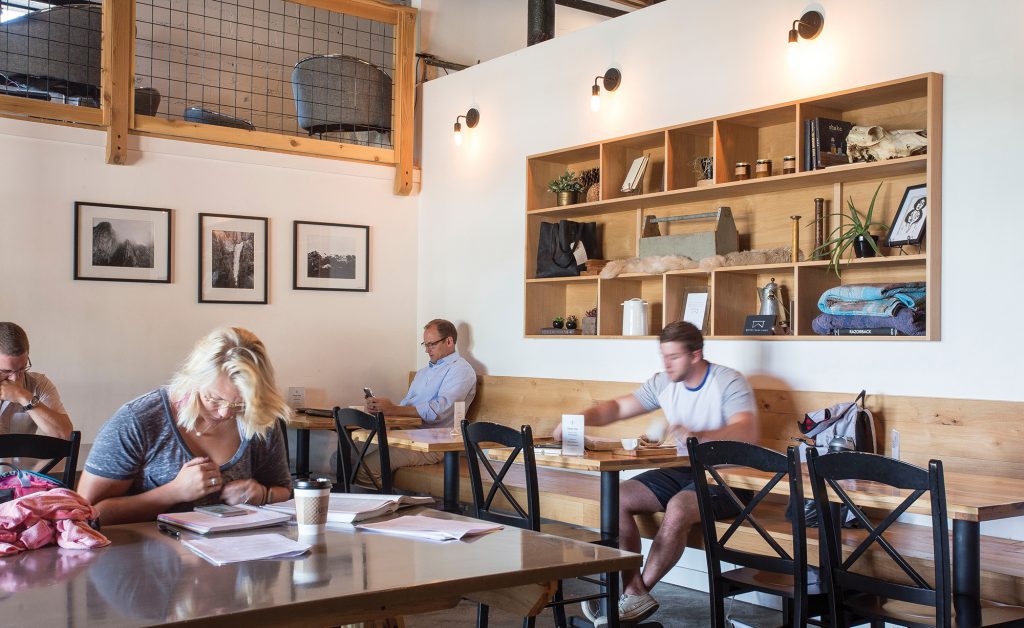 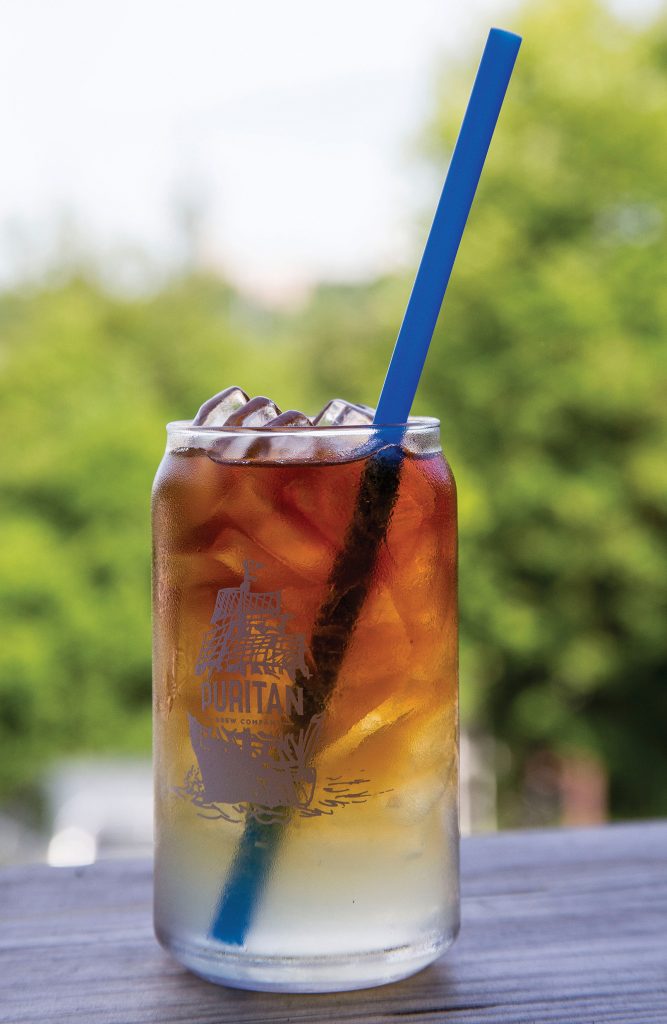 Puritan Brew Co. offers brews all day, whether you prefer yours with caffeine or hops.

There are several unique lodging options in and around Fayetteville, including the beautiful Chancellor Hotel and Inn at the Mill in Johnson. But if you want to be in the middle of the action, try the Dickson Street Inn. The boutique hotel, located in a cheery yellow Victorian-era home, hosts 10 tastefully appointed rooms, common dining and lounge areas, and a large wraparound porch appropriate for people watching. The Inn is situated above and behind the Dickson Street Pub, only a block from Walton Arts Center.

After our coffee, we stopped in Blackboard Grocery & Bakery for a quick bite. Owner Lycia Shum, said her goal is to create a sustainable market experience for folks who are not able to get to larger stores or just have a quick stop to make. Located close to the University of Arkansas at Fayetteville campus and the Razorback Regional Greenway, it’s full of convenience items and store-made grab-and-go sandwiches and snacks and is reminiscent of neighborhood markets found in large urban areas like New York or Chicago.

The Walton Arts Center is undergoing extensive renovations that have made it inaccessible this summer, but that doesn’t mean there aren’t any cultural activities to enjoy in town.

Teatro Scarpino is a funky little event space that has become a favorite destination for folks who like to dance, but prefer a more refined environment than the typical nightclub. They’re open evenings Thursday through Saturday, and you’re invited to arrive early for lessons in tango, salsa, bachata and club-style dance.

In 2011, the American Theatre Wing, founder of the Tony Awards, recognized TheatreSquared (T2) as one of the nation’s 10 most promising emerging theatres. As Northwest Arkansas’ only year-round professional theatre, T2 produces nationally acclaimed theatre, including Robert Schenkken’s Pulitzer Prize-winning play, “All the Way,” which opens their 11th season Aug. 24. Tickets and a full listing of their season are available online.

For lunch, we ventured off Dickson Street to Mockingbird Kitchen, a restaurant that opened in March. Chef Chrissy Sanderson spent eight years as executive chef and co-owner of Bordino’s, and said she is excited about reimagining “comfort food” with a fresh twist.

We shared ropa vieja, a healthy portion of beef, braised in a rich red-wine sauce cooked down with tomatoes, olives and capers. Ladled over creamy grits and topped with a spoonful of preserved lemon, it explodes with flavor. The beans and greens salad combined soybeans, black-eyed peas and brown beans cooked “al dente” with mixed salad greens and kale tossed in a tangy pepper vinaigrette. Sadly, we left no room for dessert, but I’m definitely going back for the blueberry lemon rosemary ice cream.

A beautiful summer day in Northwest Arkansas affords so many outdoor activities, it can be hard to choose just one. Among the best is a visit to the Botanical Garden of the Ozarks (BGO), an oasis of natural beauty that straddles the city limits of Fayetteville and Springdale. The BGO boasts 12 themed gardens and a variety of structures, including the region’s only butterfly house.

Walking paths in the garden connect with Lake Fayetteville Trail, a 5.9-mile hard-surface trail that is one of the first built and most popular in town. If you need a little more walking to take care of lunch, this might be the ticket. 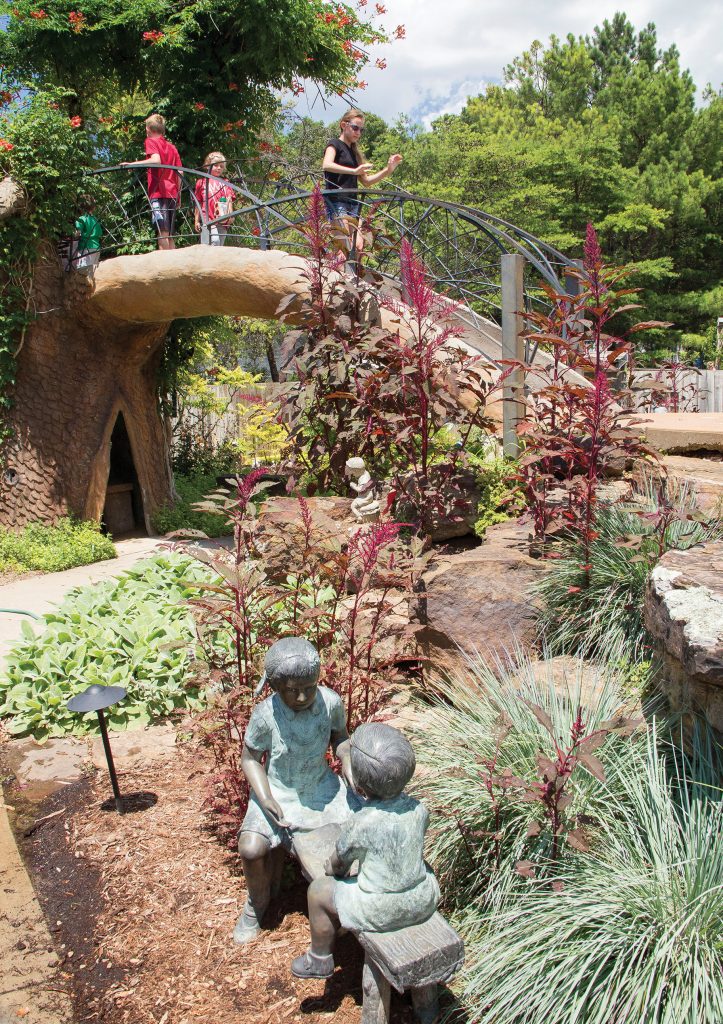 The Children’s Garden at the Botanical Garden of the Ozarks is a favorite destination for kids of all ages.

Heading north, we made our way to Emma Avenue, the location of a cultural and economic renaissance that has dominated conversation in cafes and coffee shops around town. With Tyson Foods’ announcement last year that they would be moving approximately 300 of their corporate team members to a renovated facility on Emma, the whisper of change became a roar.

Once a bustling center of commerce, the area has struggled to remain relevant for close to three decades, but change is evident as the Downtown Springdale Alliance is constantly adding events like the monthly Moonlight Movie and Barn Party: Pluck and Play to a busy community calendar.

The Arkansas Missouri Railroad has been doing business on Emma for generations. As one of the only commercial train lines in the country that offers both freight and passenger service, their excursions between Springdale and Van Buren are popular with all ages. Two other excursions are available. Check their website for schedule and tickets.

The Razorback Regional Greenway spans 37 miles between south Fayetteville and Bella Vista. It crosses Emma Avenue at Shiloh Square, a once-forgotten concrete structure currently undergoing a facelift as it’s transformed into a public park and community gathering space. Phat Tire Bike Shop just opened a new location adjacent to the Greenway and offers rentals for anyone interested in seeing some sights on two wheels. 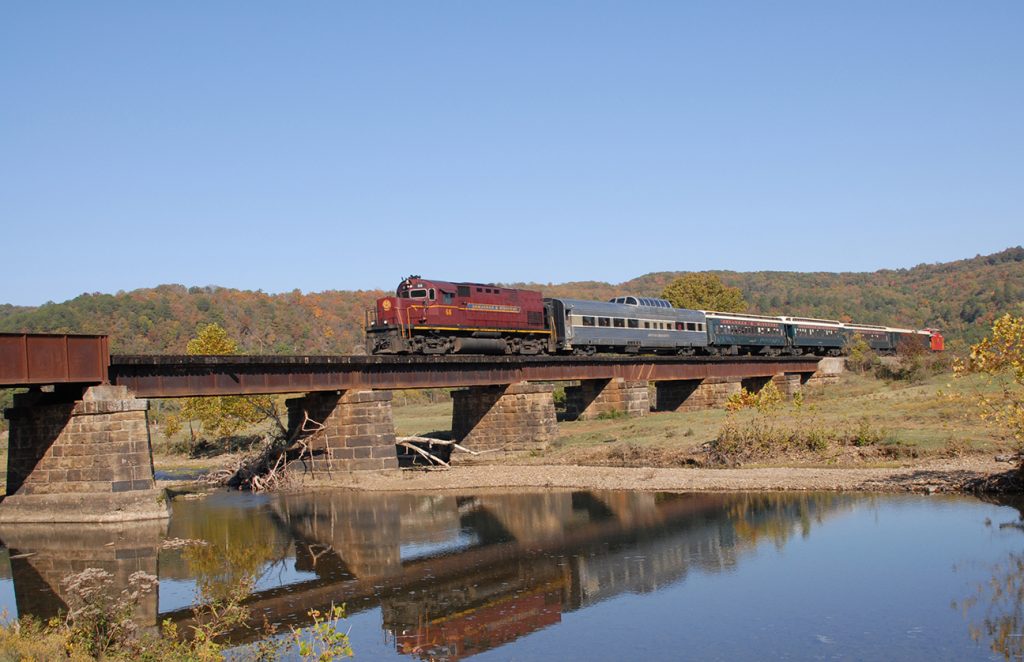 After a spin around Springdale Lake, stop in at Arkansas’ first cidery, Black Apple Crossing, or one of two new pubs downtown. Emma Avenue Bar & Tap Room is an extension of Fayetteville’s Apple Blossom Brewing Co., and the new Core Public House is the latest Core Brewing location.

After visiting a few retail shops on Emma, we wrapped up our day with dinner at The Steam. Owners Melanie and Dino Vergura have served people in the region for more than 15 years, and opened The Steam in 2014. The menu features American cuisine, including burgers, sandwiches, salads and homemade soups for lunch, with an additional dinner menu that changes regularly. Their weekend brunch menu is worth the early rise.

On this day, they offered a create-your-own pasta bowl. My creamy alfredo-basil pesto penne with shrimp was deliciously satisfying. We also sampled a local favorite: pastrami on marble rye. Perfectly stacked with red onion, cheddar, cilantro and tangy, house-made mustard, it was a deliciously simple summer dish. The Steam is also known for their homemade desserts, but we each ordered an Italian soda instead, a refreshing alternative.

Enjoying The Steam’s patio and a breeze at the end of the day, we were reminded why a visit to Northwest Arkansas is probably one of the best ways to spend a summer weekend. Clearly, Fayetteville and Springdale have all the things you’re looking for ­— and probably a few you didn’t know you needed.