Excursion: Where the Past Artfully Meets the Present & Future

For this month’s excursion, we set our cruise control to travel to El Dorado. Known for its oil boom in the 1920s and affectionately still called “Boomtown,” the thriving city is an example of how to preserve the past with a progressive focus on the future.

[dropcap]Just[/dropcap] less than a three-hour drive from Little Rock, El Dorado is well worth the drive. This south Arkansas city is rich with fabulous arts and culture coupled with an intriguing history. And with the impressive Arts and Entertainment District now under construction, El Dorado is sure to continue attracting people from all over the world. The city is off to a good start with events like the El Dorado Film Festival.

Our first stop was The South Arkansas Historical Preservation Society. We were greeted by office manager Paula Kinard and Jack Wilson, the society’s business manager. The friendly pair provided a wealth of knowledge for all things El Dorado, both past and present, and were eager to show us their new headquarters at 412 E. Faulkner. Nearby is the Newton House Museum of which Kinard happily provided a tour.

The two-story, circa 1849, home has authentic décor reflective of its pre-Civil War era construction. It’s El Dorado’s only pre-war house that is open to the public and offers a glimpse into the rich history of south Arkansas. After 60 years and several changes in ownership, the house was moved to its current location in 1909. The historical society purchased the home in 1978, and in 2009, the Antebellum home was dedicated as the Newton House Museum. 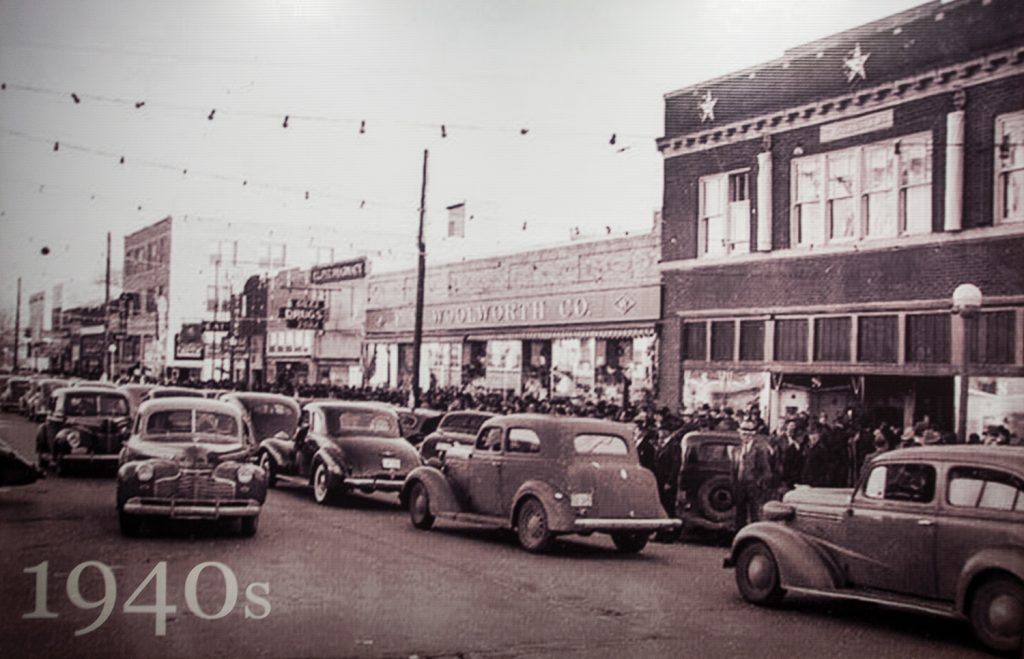 Main Street El Dorado has been a bustling street for decades. A display of the town through the decades is on showcase at The South Arkansas Historical Preservation Society.

Newton House Museum is open for tours by appointment and available for receptions, weddings and other events. The catering kitchen helps make these services possible, Kinard said, who enlightened us on the marketable mayhaw berry. Mayhaw trees are prevalent in the area and produce tart berries used to create perfectly sweet jelly.  The kitchen’s refrigerator was filled shelf to shelf with bags of mayhaw berries ready for jelly making.

This berry is so popular here that there’s even a festival named after it. Each year, on the first Saturday of May, the historical society hosts the Mayhaw Festival, a street fair with craft vendors, a chicken wing cook-off, antique car show, Newton House tours, 5K run, and of course, plenty of Mayhaw jelly for sale.

The historical society hopes to “highlight the stories of the people of South Arkansas,” Wilson said. By 2020, the goal is to have a state-of-the-art museum showcasing audio and visual archives of the area, he said. “Education and knowing our history is at the forefront of everything.”

Our appetites were revved up after our in-depth look at history, so we headed to downtown’s Union Square District for lunch. There are many good choices: Fayrays offering Cajun and Italian dishes, PJ’s Coffee and Laredo Grill, to name a few. We landed at Main Street Pizza, housed in a former drug store and soda fountain, complete with soda fountain stools at the counter.

Owners Kathy and Donnie Clayton relocated to El Dorado in 2004 to open the pizzeria. 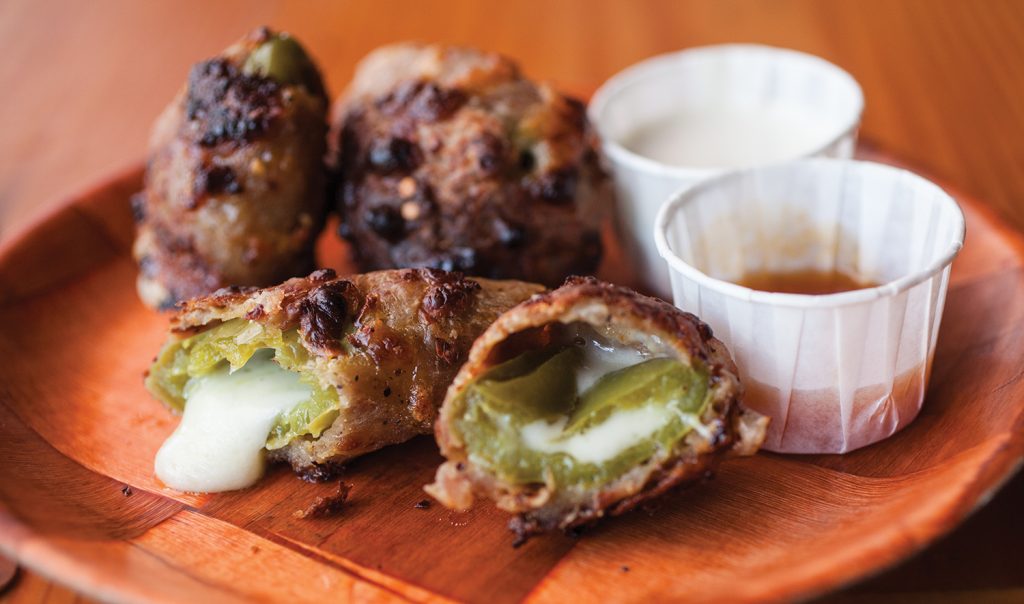 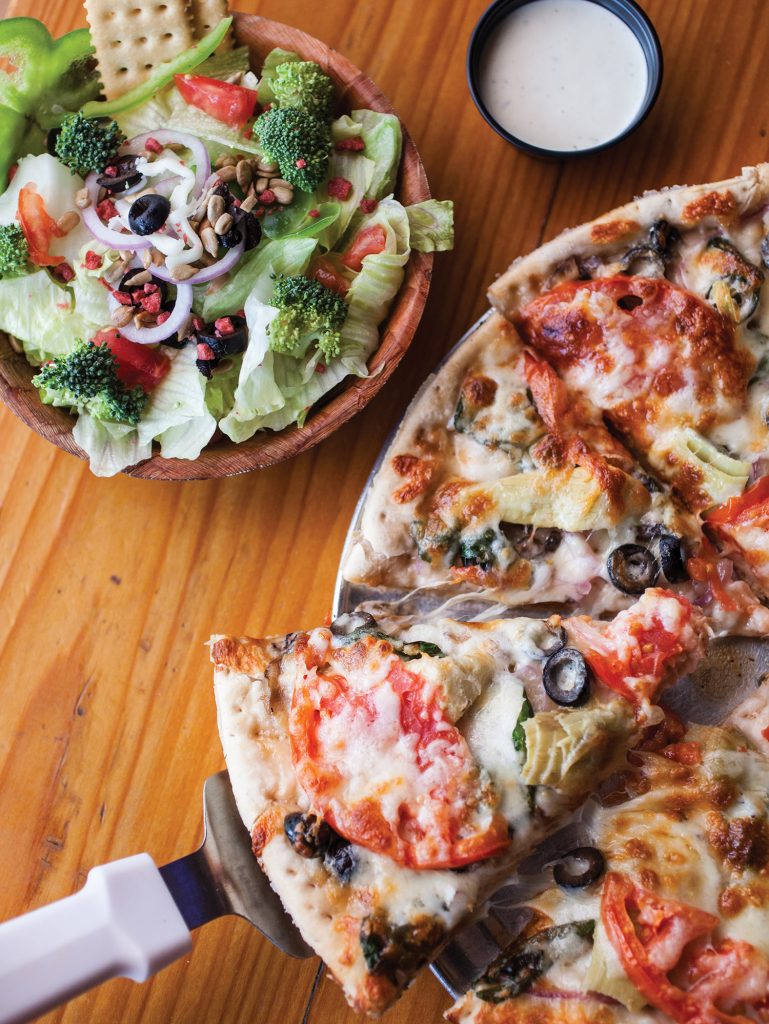 We started our meal with homemade red pepper hummus, a delightful beginning to ease our hunger. Unique to this pizza joint are the armadillo eggs. Don’t let the name fool you. This signature appetizer features fresh jalapeños stuffed with pepper jack cheese, then wrapped with a sausage cheese biscuit. We braved the spicy wild cat sauce to complement this full-flavored treat. The dish boasts a spicy heat with a warm and crunchy exterior and creamy inside. It’s a nice break from the typical chicken wing appetizer common at pizza places.

For our pizza, we selected a lighter option in the California veggie. Made with the restaurant’s signature crust that is brushed lightly with garlic butter, the toppings included spinach, black olives, red onions, fresh tomatoes and mozzarella cheese. Sure to delight veggie lovers, this pizza is a refreshing take on the heavier meat-lovers and supreme varieties. Main Street Pizza also offers a variety of hot subs, some of which are run as specials.

On our trek, bellies full, back up Main Street among various shops to meet everyone’s shopping needs, we were stopped in our tracks by a charming train car. A closer look revealed it as part of Union Square Guest Quarters. Offering suites of various sizes, the executive inn has a full range of amenities. Breakfast is served in the 1883 Central of Georgia parlor train car. The unique space is also open for meetings, catered dinners and receptions. Coulter Mason, assistant manger of the property, said his uncle and grandfather discovered the train car one day in the woods. Talk about putting an old item to good use. 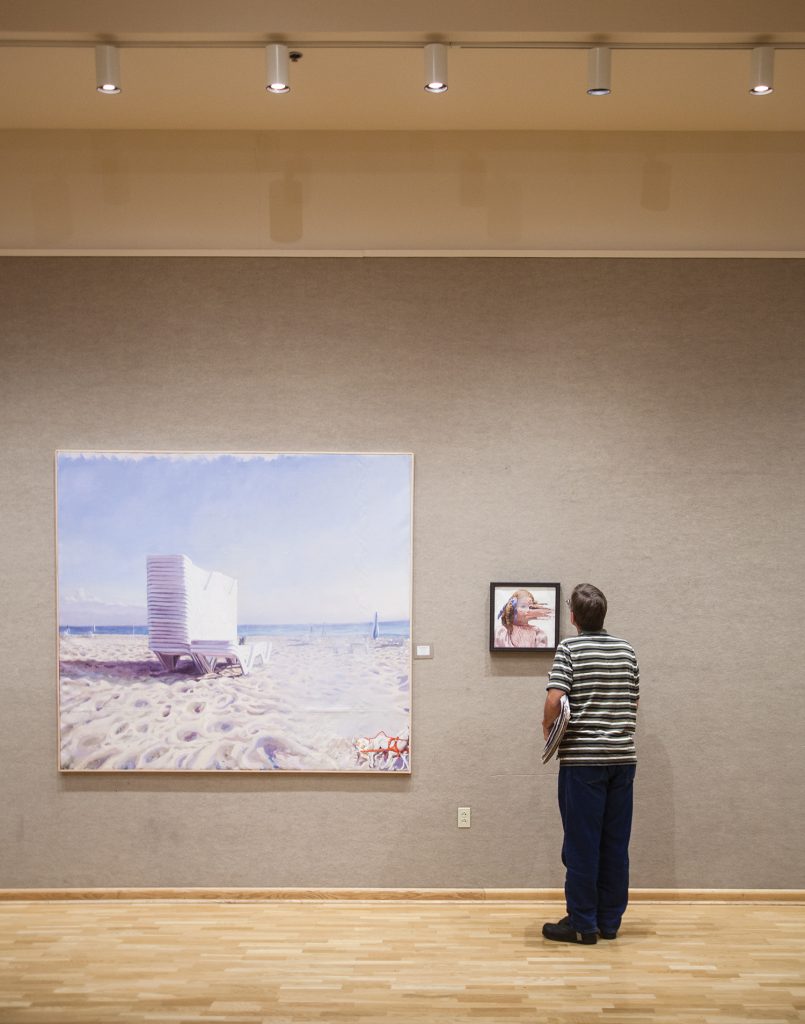 The South Arkansas Arts Center showcases art from all over and offers
a unique cultural experiences for residents and visitors alike.

We had the most welcoming visit at South Arkansas Arts Center (SAAC), 110 E. Fifth St., a gem of a place featuring art that could be found in any major metropolitan city gallery. The center also hosts live theatre with performances throughout the year. South Arkansas Arts Center is “the cultural hub of all of El Dorado and south Arkansas,” said Executive Director Beth Burns. The town’s economic development might have begun with the oil boom, but much of its growth today can be attributed to the arts, she noted.

“So many people have been touched by the arts here, and we’re seeing lots of economic development because of it.”

The day of our visit, the Juried Art Competition was on display. From digital to traditional art, this exhibit featured works from around the country. The paintings, sculptures and 3-D works were something to behold. SAAC presents a schedule of rotating exhibits of national, regional and local significance with a focus on contemporary and emerging artists.

Oil Heritage Park is just the beginning to the Arts and Entertainment District that is transforming and repurposing a group of historic downtown structures.

On our stop at the arts center, we became intrigued at mention of the El Dorado Film Festival so we caught up with three of its organizers back at Union Square District. We met at The Olde Towne Store, a boutique health foods store and deli also known for the biggest homemade cookies ever. Laura Barrow, owner of Spa on Main and film festival executive director; her husband, Austin Barrow, president of El Dorado Festivals & Events, Inc.; and Alex Jeffery, winner of the Louisiana Film Prize and film festival producing artistic director, were eager to share details of the festival, to be held Sept. 15 through 18 at Stars Cinema 6. They each went to high school here, moved away and came back because they want to be a part of the cultural transformation taking place in their hometown. 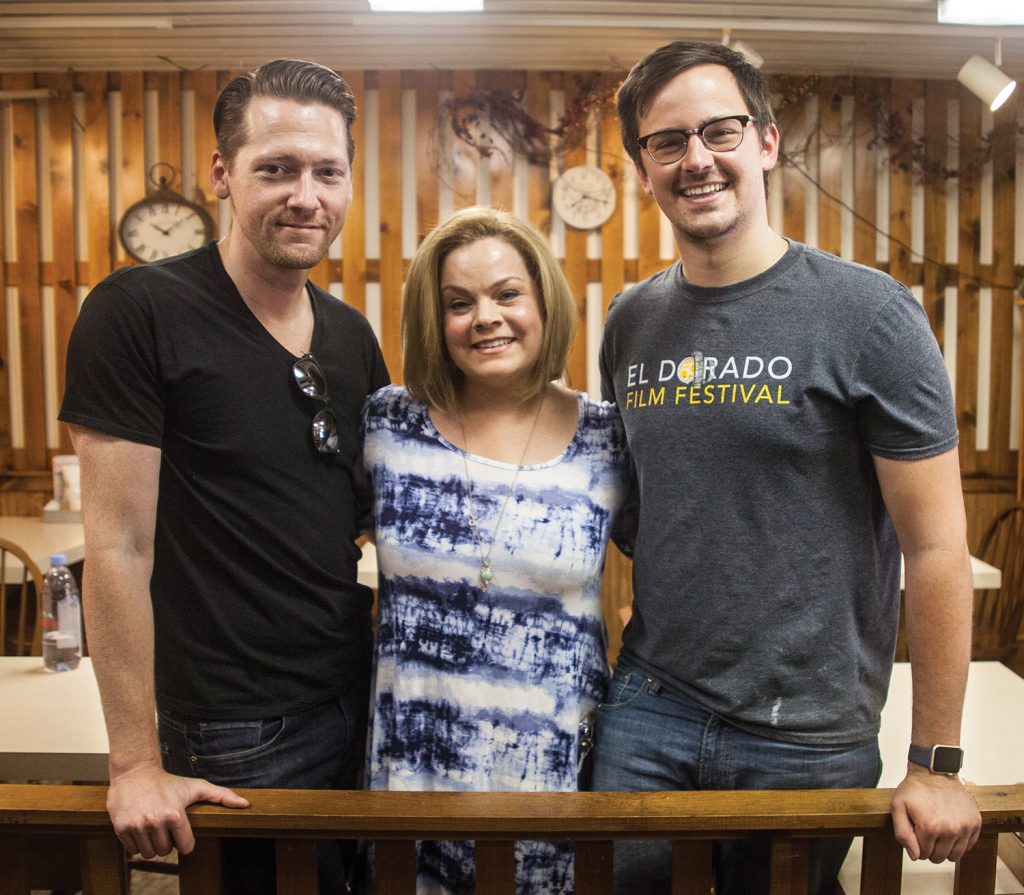 In its third year, the film festival has received more than 400 submissions from around the world and will show a number of diverse, international films as well as films with Southern flare. A kickoff event, giving attendees an opportunity to mingle with filmmakers, will be held on Sept. 14 at PJ’s Coffee. Austin Barrow noted that eight separate film projects have resulted from people meeting at the film festival.

Following our film talk, Barrow took us on a walking tour of the forthcoming entertainment district centered at the historic Rialto Theater, which is being renovated as well. Another landmark structure, the Griffin Auto Company, is also being adapted for use as a performance venue. Plans for the project include an amphitheater designed for 8,000 patrons; a multi-use music venue for up to 3,600 patrons; a multi-use theater; and a restaurant and cabaret. A destination playscape for children also is in the works.

The South Arkansas Arts Center showcases art from all over and offers a unique cultural experiences for residents and visitors alike.

Laredo Grill, a TexMex restaurant, with an appealing covered patio, is the ideal spot to unwind after a day of discovery. It was particularly hot on the day of our visit, and frozen margaritas were perfectly refreshing and cool. Made fresh with each order, the salty sweet concoction was a true treat. We sampled peach and strawberry-lime versions. Both hit the spot after a great day of exploring the history and current trends of this culturally charming Southern mecca for arts and entertainment.

Driving to the Delta

[dropcap]You[/dropcap] might be familiar with the Lower Delta as you drive through on your hurried journey to Alabama or Florida beaches; however, the area offers more than just a route to the Gulf Coast. Parks, recreational activities, shopping and historical finds are just a few of the treasures to behold in this Arkansas region.

Nestled in the state’s Lower Delta, Lake Village boasts a rich history and picturesque landscape. The town is located along the Great River Road National Scenic Byway and lies on Lake Chicot, a 20-mile channel of the Mississippi River that is also Arkansas’ largest lake.

In the mood for some antiquing? Try Nonie’s Antiques, located at 2319 U.S. Hwy. 65. This is the place to find unusual pieces and antiques, including dining table sets, headboards/footboards, china cabinets, armoires, mirrors, decorative accessories and paintings.

Just 40 miles north of Lake Village in Dumas, you’ll find Miller’s Mud Mill. The store carries Arkansas-made pottery shop by Gail Miller, for whom art became therapy when she was diagnosed with cancer. Known for the “thankful” bowl, Miller’s Mud pottery is enjoyed by many.

Next time you’re headed southeast, make a stop at any or all of these special places. You might find it’s more than just a byway to a larger destination.

Enjoy this creative video about Historic Downtown El Dorado! In this spoof of Macklemore’s hit song, “Downtown,” they highlight some of the amazing things about the small town and showcase some of the upcoming events El Dorado Festivals & Events has to offer.