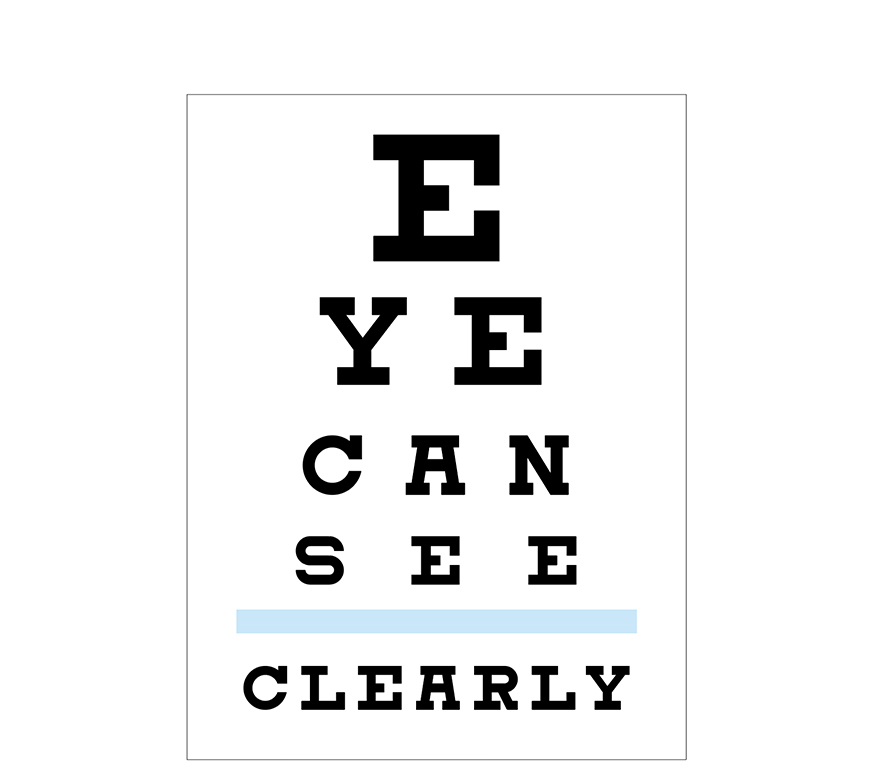 By Dwain Hebda
[dropcap]L[/dropcap]ast year, 14 million Americans over the age of 12 reported visual impairment, according to the Centers for Disease Control. In 2016, seven percent of Arkansans reported blindness or severe visual difficulty, slightly under a four-year average of 7.3 percent.
Fortunately, Arkansas is home to vision specialists who push the boundaries well past what was once thought science fiction. The following snapshots introduce three such practitioners. 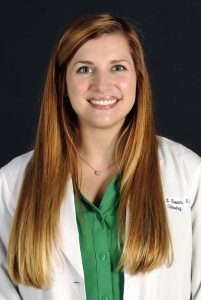 Dr. Katie Brown
Optometric physician, Jones Eye Institute
Assistant professor UAMS College of Medicine
Little Rock
Dr. Katie Brown is not the longest-tenured physician at UAMS Jones Eye Institute, with just six years of medical practice to her credit. But she’s already the recognized authority in a medical procedure that does the unthinkable – restores sight to the legally blind.
Brown accomplishes this through the use of special prosthetic contact lenses which are larger than, but worn much the same, as regular contacts. It’s technology so new in Arkansas it wasn’t even taught in medical school a few years ago.
“Within my first year at UAMS, we had someone who was doing it who left. This was the beginning of 2014,” she says. “[The procedure] was so new, that even though I had just graduated a year or two prior, I had never touched one of these lenses or even seen one on an eye. I got educated really quickly.”
The lens, called a scleral lens after the medical term for the white of the eye, is made of a hard silicone that essentially provides the patient with a new cornea. The device doesn’t correct sight that’s affected by eye disease such as macular degeneration or glaucoma but is used in cases where the cornea is damaged or deformed. 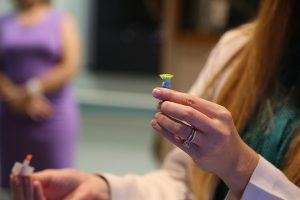 “Sometimes the cornea is warped or distorted because of trauma, some kind of injury or scarring,” Brown says. “Or maybe, they have some kind of cornea dystrophy or they’ve had a corneal transplant or some kind of surgery that has warped that cornea in such a way that they can’t see, not even with glasses.
“We fit the lens to their eye in such a way that it gives them a new cornea. Then we fill that lens up with fluid so that in between the lens and the eye, the fluid space fills in the highs and the lows of that disfigured or deformed cornea. Voilà! They can see.”
Brown has become so well-known for her expertise she’s begun to hold workshops for other physicians to help bring the procedure to more people. She’s also excited for the future of the technology behind it.
“What I would like to see out of sclera lenses is multifocals for people who need distance and near correction. Right now, there’s soft multifocals, but there’s definitely some problems with those. With a hard lens, you could build a better optic,” she says.
“I really think there’s the potential for multifocals which would appeal to a whole other group of people, those who don’t want to wear their glasses or bifocals. Not just for diseased eyes and diseased corneas but patients with normal eyes who just want really great vision.” 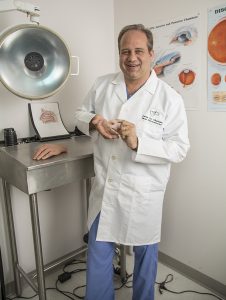 Michael Kaczkowski
President/director of alloplastics
The Center for Alloplastic Facial Reconstruction/Real
Life Faces, Arkansas Artificial Eye Clinic,
Facial Prosthetics Center
Little Rock
At age 12, Michael Kaczkowski saw his first prosthetic eye. He took it home with him.
“It changed my life; couldn’t believe it,” he says. “I had to own that eye. I bought it for five dollars in 1982.”
Naturally gifted in art, the young Kaczkowski saw a path where his passion could be utilized as a career and one that helped others to boot. By the time he reached the School of Visual Arts in New York City, he was ready to get started.
“Sophomore year, I got pulled right into the field with a company that worked with New York University,” he says. “I started working with patients and was making lifelike stuff full-time, professionally.”
The company Kaczkowski worked for was renowned and served patients from around the world. When he stepped out on his own a few years later, his reputation drew many similarly well-heeled clients to him.
“We had a limo pick them up,” he remembers. “We got a lot of VIPs, world travelers and we still do to this day, here.”
“Here” is The Center for Alloplastic Facial Reconstruction/RealLifeFaces, Arkansas Artificial Eye Clinic and Facial Prosthetics Center, sister companies operating out of a Midtown location a stone’s throw from UAMS.
Throughout the center, which includes examination and consultation areas, treatment rooms and a series of lab and production spaces, the proof of Kaczkowski’s skill is on ready display. Here, he and his staff turn smooth silicone nuggets the size of a flattened marble into stunningly lifelike ocular prosthetics.
“Once I started my own business, I was motivated to keep improving the technology,” he says. “I was motivated to do that with the same passion that I had as a child to constantly strive to create realism.”
Even in a business that lives and dies on the tiniest of details, Kaczkowski’s capacity for minutiae is exceptional. He’s gone so far as to invent new materials from which prosthetics are built, from their base chemical components up. He’s thus created advanced silicones for oculars and a synthetic skin for sheathing prosthetic limbs.
He puts this collective expertise to use to meet a range of patient needs from solely eye, ear or nose replacement to more extensive compound reconstructions. His work provides a level of satisfaction that’s hard to put into words.
“Sometimes you hear, ‘Oh, well, that’s only cosmetic,'” he says. “When you’re missing something, it’s not cosmetic anymore. If you’re missing part of your face or your hand, you’re now disfigured, okay? What we provide are things that are functional and essential to people’s lives.” 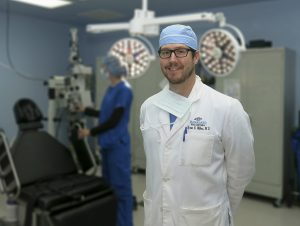 Dr. Byron Wilkes
Oculofacial Plastic Surgeon,
McFarland Eye Care
Little Rock
In just four years with McFarland Eye Care, Dr. Byron Wilkes has stacked up enough work stories to fill a career.
“The youngest patient I’ve ever treated was an infant that was probably 12 hours old,” he says. “He had an unfortunate incident during a Cesarean section that had to be addressed literally before he was a day old. As of today, my oldest has been 101. So, a pretty good range.”
Wilkes is considered one of the premier in his specialty, which is correcting drooping eyelids. The majority of surgeries he performs involve making small incisions on the eyelid surface, addressing the muscle position and fixating the muscle with some sutures.
The procedures almost always have a cosmetic component to them, but it’s not mere vanity that motivates many of them in the first place, he says.
“In children, what we are primarily focused on is visual development,” he says. “A lot of what I am tasked with is taking an eyelid that may be malformed or drooping over the patient’s visual access. I clear that so the patient can develop normal vision. In children, it’s very important to have a clear visual access at a very early age so that the brain can use the eyes together. 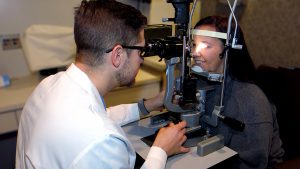 “The other thing that I do,” he adds, “is cancer reconstruction for people that have either eyelid or periocular tumors on the face involving the eyelid area. When you have a patient with a tumor growing on their face, you’re tasked with not only removing the cancer but also restoring function of the eyelid to protect the eyeball.”
Wilkes, a native of Cave City, has a particular commitment to bringing help to the people who need it in the rural parts of the state. He said while technology can assist diagnosis over long distances, the state’s medical community bears the real responsibility for bringing such services to these areas.
“Most subspecialists that live in states like Arkansas are going to have to take some of the onus on themselves to get to these patients,” he says. “Technology will help us, eventually, at least with the initial consultation that could be done over telemedicine. But it’s not quite there yet. In the meantime, surgeons are going to have to take this on, in all subspecialties.
“[McFarland Eyecare] has four locations and they’re spread out enough that if you drew concentric circles around each location your sphere of reach increases,” Wilkes adds. “Each time I drive 60 miles, well, guess what? My reach is that much closer to a patient who’s 120 miles from Little Rock and who might not otherwise be able to reach me.”