Face Behind the Place: James Hale of The Grumpy Rabbit 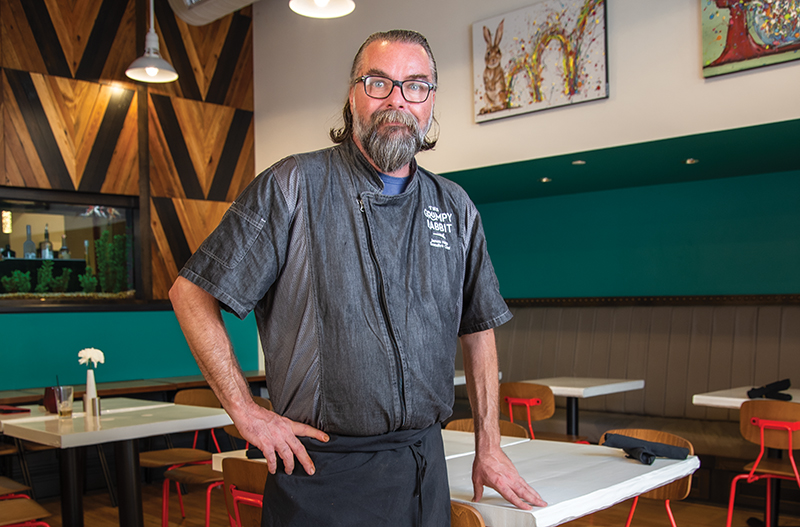 James Hale has seen and done it all, and he’s up for the latest challenge, maybe his biggest one yet.

Chef James Hale is a straight shooter. That much I gathered from our 45-minute interview. Any pretentiousness one might expect after a history that includes a James Beard nomination for Best Chef in the Southwest followed by manning the kitchen in one of Little Rock’s most respected restaurants (Capital Bar and Grill) simply does not exist. The prestigious nomination came back in 2008 during his time as chef and owner at Acadia. You remember Acadia, right?

“The restaurant was a little hole-in-the-wall I bought when I was 27,” Hale says. “It was upscale by accident. I couldn’t afford glass tabletops, so I got a contract with a linen company. Suddenly, I had white tablecloths. I couldn’t get beer taps installed, so I started serving more of a wine list.” 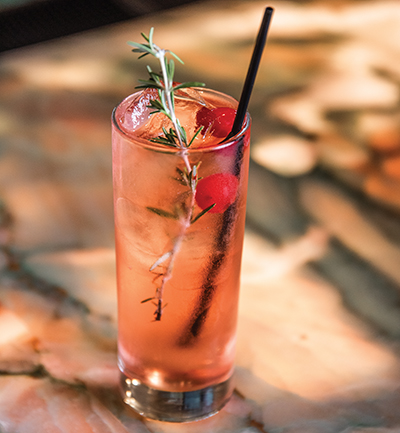 Acadia started in 1999 and had a successful 16-year run before its closing in 2015. Hale attributes much of its downfall to a changing dining scene, and while the closure was difficult on him, I sensed no bitterness as we spoke about the subject.

“For years and years, I made a great living out of it,” he says. “But the restaurant scene in Little Rock exploded, and that’s when you started seeing a lot more restaurants in downtown. When I opened Acadia, there were a few restaurants around but nothing like there is now. I don’t know if a kid could pull off an Acadia in this town now with no financial backing.

“I was really proud of that restaurant. It was ‘the little engine that could’ for so many years.” 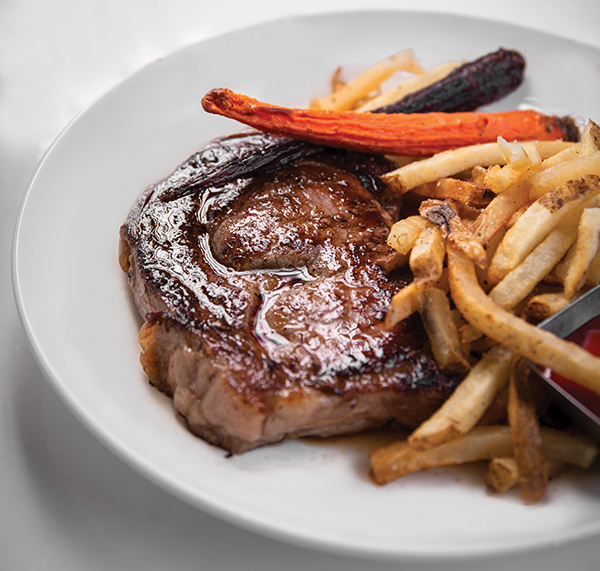 “Digging ditches is hard,” as Hale notes, and before he knew it, the kitchen came calling once again, this time in the form of the Capital Hotel. He ran the day crew at One Eleven before taking over as executive chef across the lobby at Capital Bar and Grill. Hale was there for just over a year before COVID-19 hit, temporarily shutting down the hotel and with it, the restaurant.

That is when he heard about plans for a restaurant with a funny name in the heart of downtown Lonoke. Owners and the husband-and-wife team of Gina and Jim Wiertelak connected with Hale, and by their second meeting had brought him on board to take over the kitchen at The Grumpy Rabbit. For Hale, the new opportunity came with its fair share of challenges, not the least of which was helping ensure a successful opening for a restaurant located in a small Arkansas town 30-minutes east of Little Rock, all during a global pandemic in 2020. 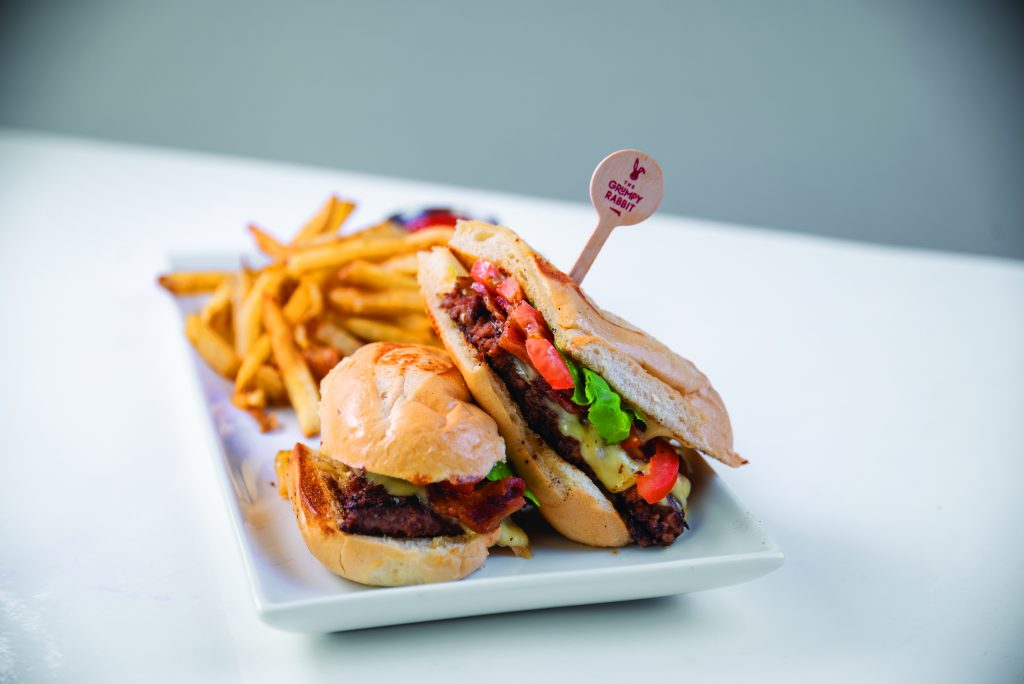 “I have never been afraid to take a risk, and it seemed like a fun  challenge,” Hale says. “I’ve been doing this long enough to experience it all. I’ve been a James-Beard-nominated chef but also a chef who closed his restaurant and went out of business. I’ve been extremely successful, and I’ve also taken my fair share of bumps. Again, I am not afraid of a challenge.”

How is that for honesty?

And while Hale enjoyed his time at Capital Bar and Grill, the reality is he did not know what the future would hold for the restaurant. Plus, there’s no denying the quick bond he formed with the Wiertelaks. He also respected what the couple was trying to accomplish. Says Hale, “It said a lot to me that they wanted to do this in their hometown of Lonoke.” Part of what that entailed was a complete revamp of a more than 100-year-old building. On top of that, just opening a restaurant and handling various pandemic restrictions proved challenging. As for Hale, it was just nice to concentrate on the kitchen and not have to worry about the various day-to-day stressors of restaurant ownership.

“My job is to make sure the food is right, as well as watch food and labor cost,” Hale says. “There are lots of headaches that I don’t have as an executive chef versus being a chef and owner.” 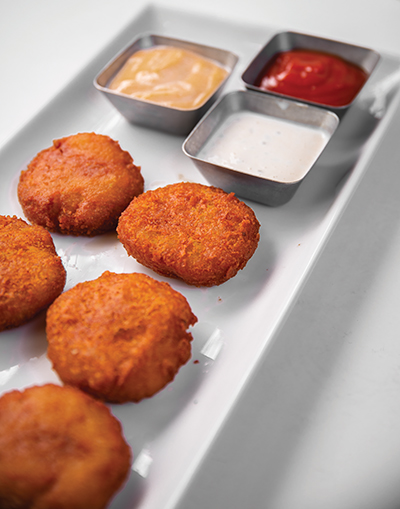 After two visits, I can safely say Hale has done an excellent job of getting the food right. In addition to lunch and dinner services, The Grumpy Rabbit is open for brunch on the weekend. Popular offerings like The Grumpy Burger, Rueben and BLT rule the day shift. At night, the “Supper Entrees” section is highlighted by favorites like the ribeye, blackened redfish and beef tenderloin. One item that is always available is the house-made tater tots appetizer. These tots come smashed flat, fried right, and are perfect for dipping in your choice of three sauces. I recommend the spicy ketchup, fry sauce and ranch.

For dessert, the small slab of carrot cake with its thick layer of cream cheese frosting, is the way to go, as is the chocolate sheet cake that’s about as down-home as it gets. Both are heaping portions best shared between a table of two to four patrons. Overall, the menu is approachable, familiar, and like Hale, straightforward. Most folks seem to approve. 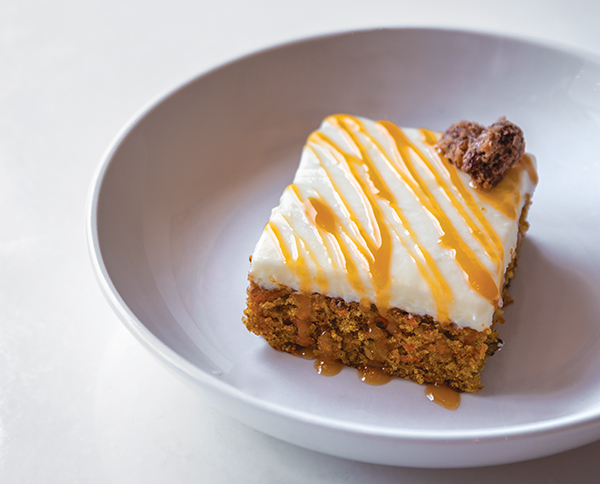 “So far, it has been a great response,” Hale says. “We have been so appreciative of the support, and not just from Lonoke but all the surrounding communities. It is beyond anything I could have imagined. People are so excited about this restaurant.”

That excitement seems to be shared by Hale. When asked if he was happy at The Grumpy Rabbit, an exuberant response came without hesitation.

That is good news for Lonoke and beyond. 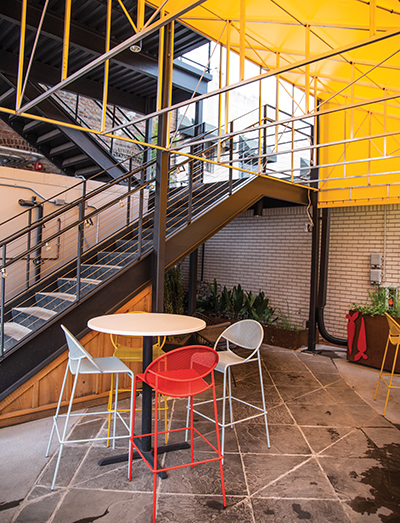 1. Who makes your favorite cheeseburger?

The one place that I will go out of my way to get a cheeseburger is when I am in New Orleans at Port of Call.

2. Who is the most famous person to dine in at a restaurant you’ve worked at?

We cooked for Bill Clinton at Acadia, and I actually got to talk politics with him for five minutes. Jesse Jackson came to the restaurant as well, but probably my all-time favorite story involving Acadia and famous people is Roy Scheider. Jaws is my favorite movie. He came into the restaurant many times, and one night I asked for his autograph. It’s the only time I’ve done something like that. He signed a menu: “To James, Smile you son-of-a-bitch. — Roy Scheider.”

3. Where would you like to travel to on your next vacation?

I want to do the drive out West. I’ve flown but have never done the drive.

4.What was your first car?

5. What is your favorite concert?

Well, it’s two of them. U2’s Zoo TV Tour in 1992 and Springsteen at the Jazz Fest in New Orleans when he was 64. I thought it was going to be this old man working through his songs, but he played four hours and even did some crowd surfing.