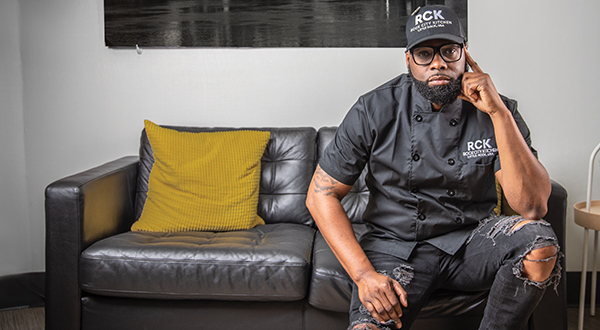 The man with many talents takes hard work to another level.

Joe Vincent II is the general manager of Rock City Kitchen and Rock City Tacos. In total, he now oversees three restaurants in the downtown Little Rock area, all under his family’s FAB44 business umbrella. And while running these food ventures is enough to keep anyone busy, his day does not begin how you might expect.

“Man, you wouldn’t even imagine. I start my day at the cemetery,” he says.

And before you get any weird thoughts, just know that is thanks to the lawn service he also runs. 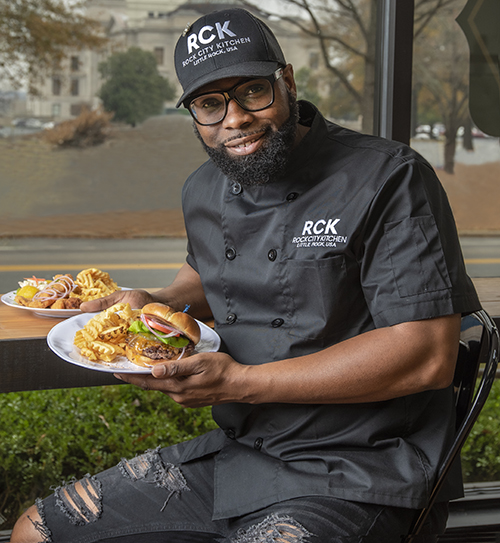 Afterward, Vincent gets dressed and goes into full Rock City Kitchen and FAB44 mode. By 2 p.m., he is delivering meals to schools as part of their reimbursement meal program. Yes, he does that, too. This goes until about 6 p.m. He then finishes up his work by checking on all the company’s social media and online presence.

It is a full day, but after chatting with him inside his inaugural Rock City Kitchen location, a spot that gives patrons the best view in town of the iconic Arkansas State Capitol, I can’t imagine he would want it any other way. But how did he get here? How did a man with strong marketing skills, yet a limited background in the restaurant industry, manage to do all this?

“I normally would be more on the development and concept side. That’s what I’ve always done,” Vincent says. “I played with the Rock City Kitchen concept. I love everything about the name and the brand. I worked on it for two years and was hoping to deliver it to someone else and just be on the design side. But the pandemic hit, and no one was trying to get into the restaurant business.” 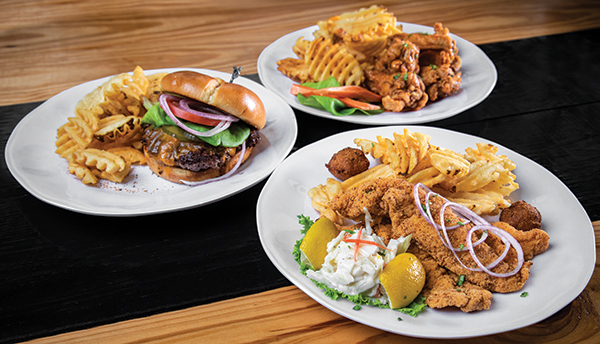 With the help of his mother, Faith Sherman, who maintains the accounting and behind-the-scenes logistics, the two opened their first restaurant inside the Department of Finance and Administration building in downtown Little Rock at 1515 West 7th Street in July 2020. One month later, they opened the second Rock City Kitchen location, right down the block inside the Central Revenue Office building at 1816 West 7th Street. In May 2021, Rock City Tacos opened at 415 East 3rd Street. At Rock City Kitchen, the menu consists of breakfast and lunch classics. Items like breakfast burritos, omelets and bacon and eggs make an appearance during the morning hours, while Faith’s Fish Plate (with fried catfish), burgers, salads and sandwiches fill the lunch menu. If you have a hankering for wings, Rock City Kitchen’s country-fried version with Truth Sauce is some of the very best you will find in town.

Opening the two Rock City Kitchen restaurants in the middle of a global pandemic was no easy feat, but the need was certainly there. The buildings and area, in general, were filled with essential workers who were in need of breakfast and lunch options during a crazy time.

“Everything down here was still moving,” Vincent says.

He and his team got to work and followed strict guidelines with how they ran the restaurant and served food.

“People had a sense of trust,” he says

That trust was the catalyst to Rock City Kitchen’s success. All three restaurants continue to grow, and so does the aforementioned meal program.

“We started the FAB44 meal program about three years ago,” Vincent says. “We had a community youth intervention program through the City of Little Rock, and we had to provide meals for the program.”

The program went from feeding 21 students with a separate meal provider to now cranking out more than 1,200 meals a day, all made inside Rock City Kitchen. The majority of the kids being fed each day are Little Rock School District students. For Vincent, it is community first, with a focus on youth. 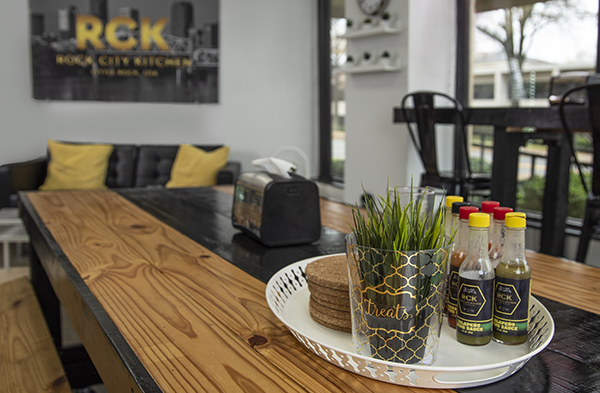 “I see what a big difference the meals make,” he says.

Mentoring makes a big difference as well. Oh yeah, Vincent does that, too.

The future continues to look bright for both the meal program and the restaurants.

“We are still on a good pace to grow in the future, considering what we are dealing with economically and globally,” Vincent says. Through it all, he maintains a positive outlook. “I have always been intrigued by entrepreneurship. I love to see something grow. I think we have made a name for ourselves within the community and the city and state departments. I am looking forward to getting ready for that final piece, which is a standalone dinner concept.”

I have no doubt that Joe Vincent II and his family will make it happen. Hard work and determination have a way of making dreams come true. Here is to continued success down the road.

What do you enjoy doing in your free time?

I love playing basketball, but I have also helped train my son over the past eight years. He’s now the starting point guard for the University of Central Arkansas. His name is Camren Hunter.

What was your favorite food as a kid?

Spaghetti. I love spaghetti — still love it to this day.

Is there someone along the way who has inspired you?

There are a couple people. First, there is definitely my mother, and I have had great mentors like Pastor Hester and my stepdad, who was a pastor at his church. My dad is incarcerated, but he always tried to give me any bit of knowledge to help me along the way.

What is something that most folks might not know about you?

People probably do not know that I cut grass every day during the season.

Do you have a sweet tooth?

Sometimes, at night, I love those Little Debbie Unicorn Cakes. They are not available all year, but I’ve got a stash!