Face Behind the Place: Kamiya Merrick of At the Corner

Face Behind the Place: Kamiya Merrick of At the Corner

From the soccer field to the kitchen, Kamiya Merrick’s competitive nature and fierce determination know no bounds. 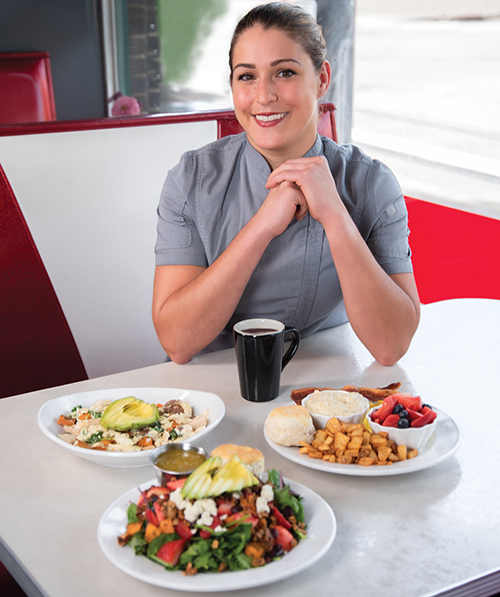 Soccer brought Kamiya Merrick to Little Rock, but family and food made her stay. The young co-owner and executive chef of At the Corner, the popular breakfast, lunch and brunch spot in downtown, came to the capital city from Ontario, Canada, on a soccer scholarship from the University of Arkansas at Little Rock. And although her collegiate career was plagued by injuries, on the personal front, she met her future husband, Dutch, and eventually married into a family that was determined to change the Little Rock restaurant landscape. After graduating, Merrick spent a full year immersing herself in the city prior to the restaurant opening. The training demands on a student athlete often limit non-school activities, so this was her first, unfettered opportunity to experience Little Rock.

“I fell in love with it,” Merrick says. “I saw the potential that this city has. Little Rock and Arkansas are so underrated.”

By 2014, she, along with mother-in-law, Helen King, and sisters-in-law, Leila King and Helen Grace King, took that restaurant plunge, opening At the Corner — complete with a menu of stick-to-your-ribs comfort food classics like burgers, poutine, chicken and waffles, biscuits and gravy and buttermilk pancakes.

Merrick says, “Looking at the market, we definitely saw a demand for a breakfast spot in downtown.”

I was there at the very beginning, interviewing the women and wondering what this new spot was all about. Truth be told, I had my doubts, as the group seemed a bit green and inexperienced. That included Merrick, who was new to running a kitchen. Six years later, I could not have been more wrong, as the family has built one of the most popular restaurants in town. If you do not believe me, check out the line that routinely extends down Markham Street on a Sunday morning for brunch, in part because of a creative, rotating menu often featuring local products.

“I’ve developed strong relationships with a lot of the farmers. That’s what drives the inspiration. It’s definitely a collective inspiration to do these seasonally driven menus,” Merrick says. “Getting the customers to order something unique and different has become easier now that we’re six years in. They now come to try the specials, but that took time. A lot of people come for the staples, but when I create these menus, I want the specials to sell even more than the staples.”

When she thinks back, one dish — the Fried Chicken Grit Bowl with blueberry compote, lemon curd and cheddar cheese — stands out.

“It was a play on the sweet and savory,” she says. “To this day, that’s one dish people ask me when we’ll put it back on the menu.” 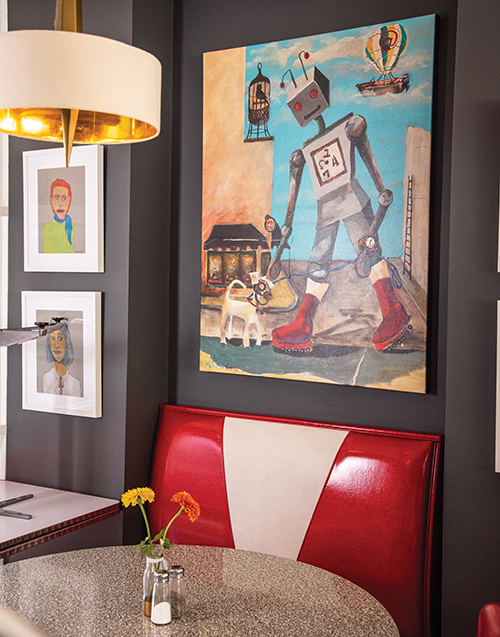 And whether it ends up back on the menu or not, I imagine it’s a topic that will be discussed between Merrick and the rest of the At the Corner hierarchy. As on the soccer field, there’s a true team environment at the restaurant, with success built on smarts, hard work, grit and a blending of varying talents from the female family foursome.

“We all bring different traits,” Merrick says. “I’m a little more rough around the edges. I guess I lack that Southern charm, but we’re definitely each other’s backbone. There’s just no way we would have survived the past six years if we didn’t have each other.”

For Merrick, the beginning days of At the Corner put her determination to the test. She says, “It was nerve-wracking, but at the same time, I wouldn’t allow myself to fail, so I knew that I needed to do what I had to do to create a successful restaurant.”

She also surrounded herself with trusted mentors and experienced chefs, soaked up their knowledge and direction and, in turn, strengthened her cooking skills, but also experienced a broadened perspective about the chosen path. 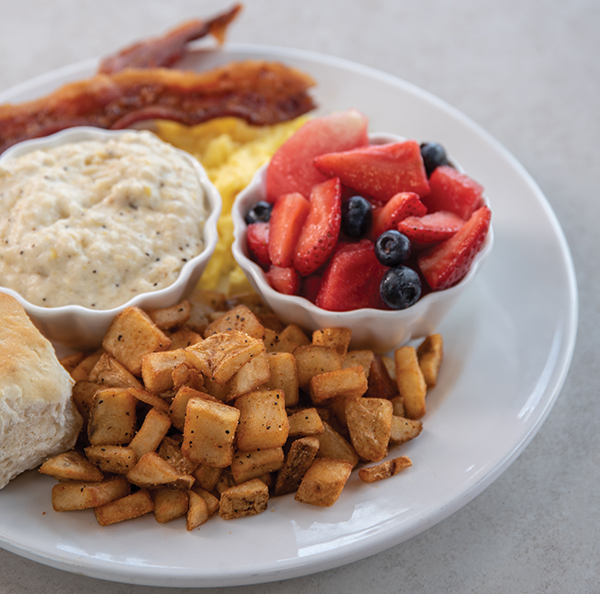 “You have to be thick-skinned to be in the restaurant industry,” she says. “It’s not easy. Every day there’s a new demand and a new challenge. You have to be quick, think on your feet and handle that adversity.”

Again, that sounds a lot like being on a soccer field, but the commonalities don’t stop there.

“The physical demand of being an athlete and working in the restaurant industry is similar,” she says. “On the weekend, it’s like prepping for game day. After we get there in the morning, we finish the prep, set up the line, and everyone has their own position. I have someone working the grill, someone working on the cool side, someone on the fryer, two people on dish, and I’m on expo. When that line out front starts forming, everybody gets into position, puts their head down, and we get the job done. It’s like playing a game of soccer for those five hours we’re open. There are days when my body feels like it has been put through the wringer.”

And since 2020, those challenges have only increased due to a global pandemic.

“You have to be able to withstand the physical, mental and emotional challenges that come at you in the restaurant, especially over the past year and a half,” Merrick says. “It’s been one of the most challenging, trying times I’ve had to deal with in my whole life. In general, there are ups and downs with a restaurant, but through the pandemic, it was heightened threefold.” 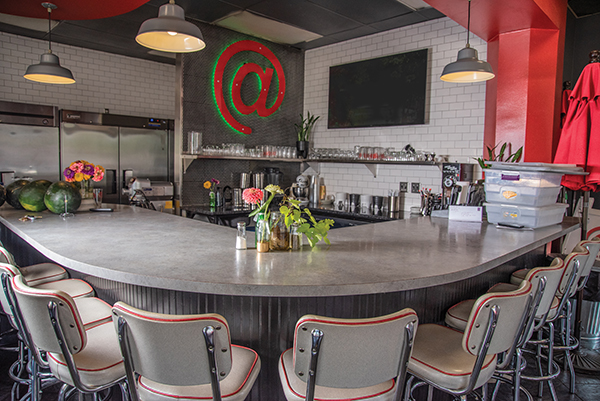 Fortunately, the At the Corner team hasn’t missed a beat throughout the pandemic, transitioning to curbside service and outdoor seating, while also taking an active role in feeding health care workers. On top of that, Merrick and the Kings have a new downtown Little Rock restaurant in the works. There is no opening date as of yet, but folks should be on the lookout for Henrietta’s, a plant-centric eatery located on Third Street.

“It will be nothing like you’ve ever seen in Little Rock,” Merrick says. “Sometimes in life, you have to take that leap and believe in yourself and have that faith and just know you’ll be successful.”

Sounds exciting, both for diners and the chef, who will now be overseeing two vastly different kitchens. The confident Merrick is up for the challenge.

She says, “You have to believe in yourself and exude that confidence, but in a very humble manner.”

A second restaurant means Merrick is even more invested in Little Rock and helping build a stronger community. That’s OK with her.

“I’m absolutely in love with Little Rock,” she says. “The people are amazing.”

And with the help of Merrick and the Kings, so is the food. Game on. 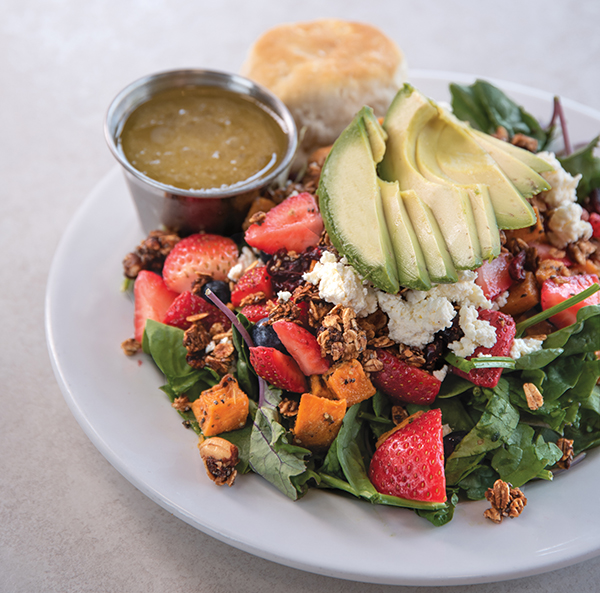 1. You’re from Canada, so I have to ask, are you a hockey fan? I’m not. My dad was a hockey player, and I did grow up in the arena, chasing pucks. But I can’t lie and say that I’m a hockey fan.

2. What do you do to unwind?  I work out, things like yoga, pilates class and lifting. That’s my release.

3. What is one thing about yourself that most people do not know? I have four dogs, Amelia, Rex, Regal and Hazel. Luckily, I have no kids, but they are my kids.

4. What is your favorite television show? It’s kind of cheesy, but I like The Challenge.

5. What was your worst sports injury? I tore my ACL three times during my college career. It’s still torn.

6. What was the first movie you saw in the theater? Titanic. I had the biggest crush on Leonardo DiCaprio.

READ MORE: Face Behind the Place: James Hale of The Grumpy Rabbit