Face Behind the Place: Susie Powell of Hoots BBQ & Steaks 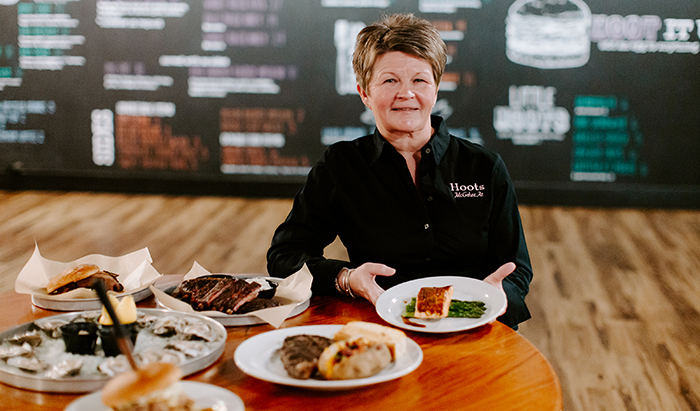 Face Behind the Place: Susie Powell of Hoots BBQ & Steaks

Some of the best barbecue in the Arkansas Delta was dreamt up on a Texas beach.

It was somewhere around 2010, reckons Susie Powell, owner of Hoots BBQ & Steaks in McGehee. Three years earlier, she and her husband, David, had sold their farm and bought a 45-foot motorcoach. Then, they took their vehicle south to explore the coast at their leisure, from Key West to South Padre Island. They were living the dream. But eventually, even that idyllic life grew old. Their dream had plumb worn out, and suddenly it was time for a new one.

One day, sitting on the picturesque beach in Port Aransas, Texas, the couple came to the realization. 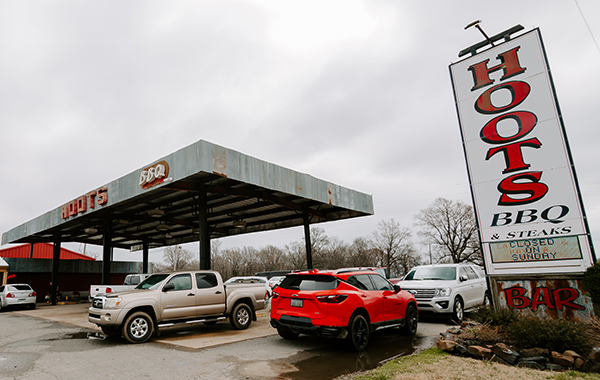 It was a bold suggestion, pulled, she says, right out of the blue. Susie had worked decades at a dentist office in McGehee. David was a farmer with a law degree. What neither of them had whatsoever was restaurant experience.

But Susie loved to cook and was good at it. She asked David his thoughts on what sort of restaurant they should open. 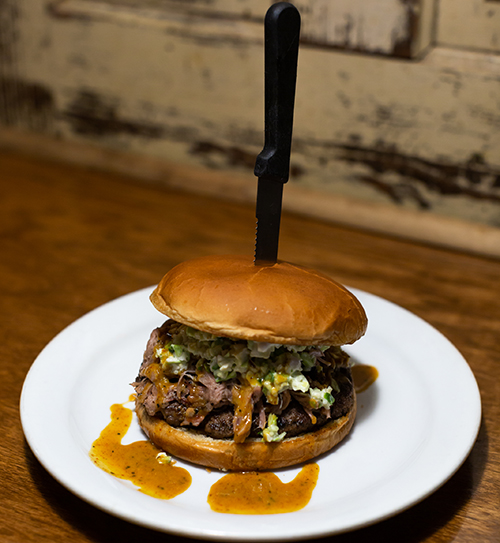 But they learned how to smoke meat, and learned it well. And they found a jewel of a location for their venture, right on US-65, where almost everyone passing through McGehee would see the restaurant. It was a former gas station and convenience store with acres of parking. But it had twice before been a restaurant.

And curiously, when it was built in the 1940s, the spacious, high-ceilinged building had originally been a cattle auction house. So, in a way, selling beef (plus Hoots’ pork, chicken, turkey, bologna and seafood) is going back to its roots, albeit in a completely different way than ranchers did there 70-odd years ago.

After 18 hard months of renovating the building themselves, the couple hired a team of restaurant staff (who also had little restaurant experience, Susie says, with a bit of a wry laugh). It was going to be trial by fire. All their cards on the table, they opened the doors of Hoots in April 2012.

The line was out the door all day. Customers kept coming.

Hoots was an instant hit from Day One.

And, save for the first closed month of the pandemic before Susie installed a to-go window and pivoted to 100 percent carryout for six months, the pace at Hoots has remained busy, and the restaurant’s popularity has only grown. In fact, Susie says if you want a table at dinner, especially on weekends when the out-of-towners descend on the place, you almost always need reservations. People come for the food, she says, from about 100 miles around, including frequent guests from Mississippi and Louisiana. She says regulars know to also request their orders of ribs when they make their reservations; otherwise, they might be sold out.

Besides the large sitting area, there’s a separate bar area and an expansive special event space in the back. All get frequent use. Hoots has counter service at lunch and table service (from an even bigger menu that includes favorites like premium steaks and barbecue-rubbed grilled salmon) at dinner.

April 23 will be Hoots’ 10th anniversary. And its success comes directly from Susie herself, and her staff of about 50, to whom she gives much of the credit.

David came up with the wild idea for opening the restaurant and was absolutely integral to building it up those first years — deciding on the menu, getting it operational. But on June 5, 2015, he died of a sudden heart attack. They’d been married 20 years.

“I’ve been doing this myself since 2015,” Susie says. “After he passed away, everyone said, ‘Oh, are you going to sell?’ I said, ‘Why would I want to sell this place? I love what I do!’ Sure, at times it gets frustrating and hard, and you get mad and want to pull your hair out, but I have a lot of people employed. And I just love this place. It means a lot because David and I built it together.”

Susie’s a petite, practical woman who radiates good humor and a determined grit that’s served her well as she’s adapted to her role as sole owner. David was the gregarious, front-of-house guy who greeted everyone, while Susie worked in the kitchen, her preferred place out of the spotlight. 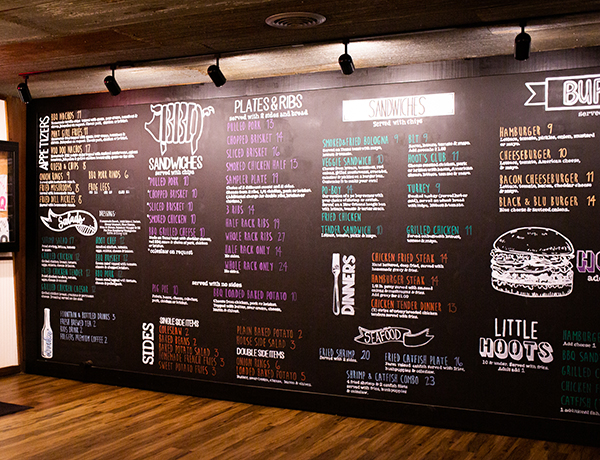 In 2019, she was included in AY’s list of Intriguing Women in the state. She’s not fond of being in front of the camera, but admits that the photo shoot, held in the old train station in Little Rock, was “actually a lot of fun.”

Susie grew up as Susie Morse in Dermott, about 8 miles down the road, the daughter of Betty and Neil Morse. Neil was an insurance salesman; Betty worked at a bank.

Hard work is clearly in Susie’s blood; after her mother retired from the bank, she came to work for Susie, helping bake Hoots’ signature desserts. Betty continued working at the restaurant at least a couple of days a week until this past December. “When she finally decided to stop, she was 82,” Susie says, the respect clear in her voice.

Susie comes in early every morning to bake fresh desserts (Hoots offers four kinds of cake, plus cheesecake, banana pudding and a lemon icebox dessert in a cup). She still uses her mama’s old family recipes and makes them from scratch.

Most Thursday, Friday and Saturday nights, she’s in the kitchen, which is now under the purview of Chef Brian Hargis, a talented professional she hired after David’s passing. She says Hargis is wonderful, but, “When I’m in the kitchen, I like to cook!” The premium steaks are her specialty. Other times she might be found shucking oysters or doing a thousand other daily tasks. She’s always in action. 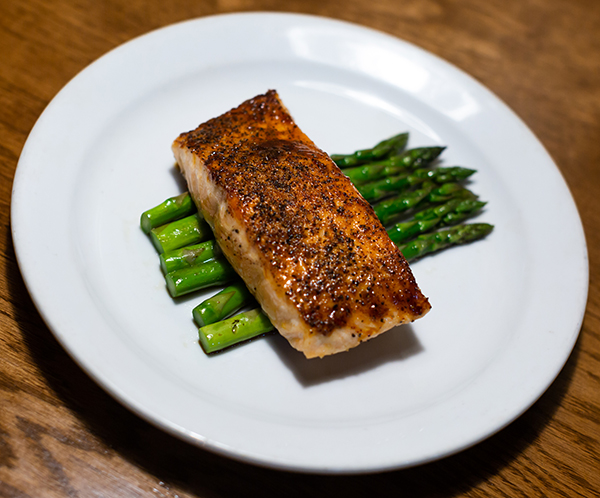 And romance has found her again.

“I have a boyfriend now. In the summer, if he needs help on his farm, I’ll help him,” she says. They enjoy being on the water of nearby Lake Chicot, and “of course” rooting for the Razorbacks. She’s partial to the blues and country music piped through the restaurant’s sound system.

“But as far as hobbies, that’s basically it,” she explains. “Mostly, I just work.”

Susie’s work ethic and Hoots’ smoker have that in common. It’s constantly on six days a week, slow-cooking brisket and pork butts for 14 hours per batch. They smoke chicken and ribs for lunch and fresh again for dinner. Both batches reliably sell out. Only Sunday, when the restaurant is closed, is a day of rest.

Still, she says, the work is never boring, and every day is different in the restaurant business.

“I do care about this place. I care what people think. I care about my amazing employees. I care about having a consistent product,” she says. “Our barbecue is really good, and consistently so. It’s just as good now as the day we opened; we work hard to keep the quality up. I’m very proud of our food. 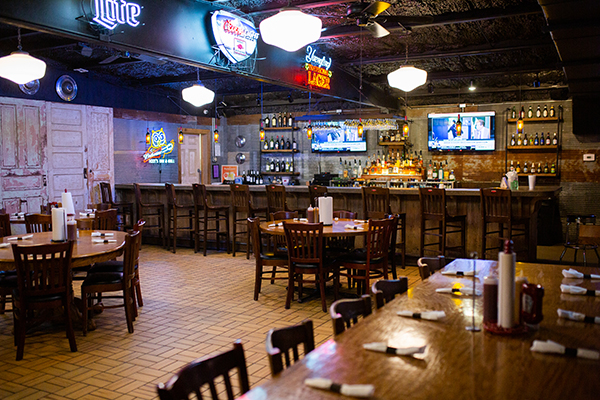 “I only can explain it by saying it is a love affair. I have a love affair with this place. When you love what you do, it gives back to you. It really does.”

And she gives back to the community whenever she can. McGehee, she says, may not be growing much, but it’s holding steady. The local Boys and Girls Club is her favorite cause to support. She likes its mission of giving the youth of Southeast Arkansas a positive space to grow and to stretch to meet their full potential.

After all, the community’s young people are part of the restaurant’s namesake.

“David and I wanted the restaurant to have a name that fit our personality, but we also wanted to fit into our community,” Susie explains with a grin. “Our school mascot in McGehee is an owl. So, we root for the Owls. An owl hoots, and David and I had a hoot no matter what we did together. The name means this is a place to have a good time.”

Susie says she and David had a favorite quote that drove them ever forward, and the simple words give her energy and determination: “Live every day like it’s your last.” Susie says matter-of-factly, “Honestly, that’s what I live by. I get up every single day and live it like it’s my last day.